The tandem pn-type dye-sensitized solar cells (pn-DSCs) have received much attention in the field of photovoltaic technologies because of their great potential to overcome the Shockley-Queisser efficiency limitation that applies to single junction photovoltaic devices. However, factors governing the short-circuit current densities (Jsc) of pn-DSC remain unclear. It is typically believed that Jsc of the pn-DSC is limited to the highest one that the two independent photoelectrodes can achieve. In this paper, however, we found that the available Jsc of pn-DSC is always determined by the larger Jsc that the photoanode can achieve but not by the smaller one in the photocathode. Such experimental findings were verified by a simplified series circuit model, which shows that a breakdown will occur on the photocathode when the photocurrent goes considerably beyond its threshold voltage, thus leading to an abrupt increase in Jsc of the circuit. The simulation results also suggest that a higher photoconversion efficiency of the pn-DSCs can be only achieved when an almost equivalent photocurrent is achieved for the two photoelectrodes. View Full-Text
Keywords: dye-sensitized solar cells; pn type tandem; circuit model; photocathode; current matching dye-sensitized solar cells; pn type tandem; circuit model; photocathode; current matching
►▼ Show Figures 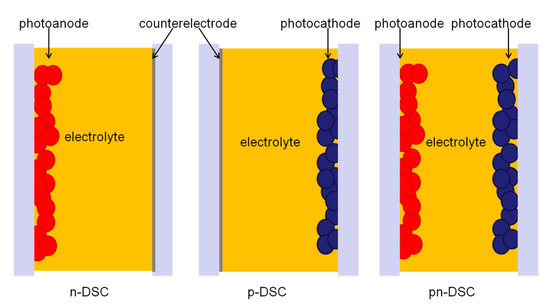