On the Core-Shell Nanoparticle in Fractional Dimensional Space

The investigation of core-shell nanoparticles has been greatly exciting in biomedical applications, as this remains of prime importance in targeted drug delivery, sensing, etc. In the present work, the polarizability and scattering features of nanoparticles comprised of nano-sized dielectric/metallic core-shell structures were investigated in the fractional dimensional (FD) space, which essentially relates to the confinement of charged particles. For this purpose, three different kinds of metals—namely aluminum, gold and silver—were considered to form the shell, having a common silicon dioxide (SiO2) nanoparticle as the core. It is noteworthy that the use of noble metal-SiO2 mediums interface remains ideal to realize surface plasmon resonance. The core-shell nanoparticles were considered to have dimensions smaller than the operating wavelength. Under such conditions, the analyses of polarizability and the scattering and absorption cross-sections, and also, the extinction coefficients were taken up under Rayleigh scattering mechanism, emphasizing the effects of a varying FD parameter. Apart from these, the tuning of resonance peaks and the magnitude of surface plasmons due to FD space parameter were also analyzed. It was found that the increase of FD space parameter generally results in blue-shifts in the resonance peaks. Apart from this, the usage of gold and silver shells brings in fairly large shifts in the peak positions of wavelengths, which allows them to be more suitable for a biosensing purpose. View Full-Text
Keywords: core-shell nanoparticle; surface plasmon; fractional dimension space; polarizability; scattering core-shell nanoparticle; surface plasmon; fractional dimension space; polarizability; scattering
►▼ Show Figures 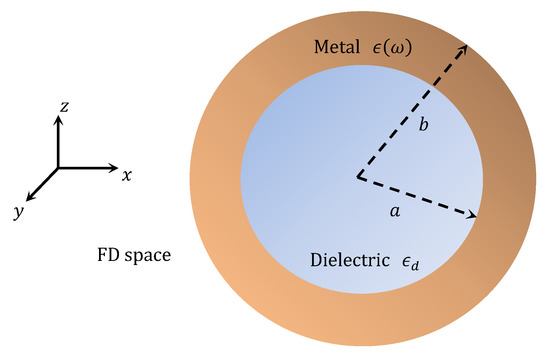