In the present study, the reproducibility and postoperative stability of a 3D printed surgical guide were evaluated in mandibular reconstruction with an osteocutaneous free flap (OCFF), including a fibular free flap (FFF) and deep circumflex iliac artery free flap (DCIA). Fifteen patients were enrolled, and a 3D surgical guide was fabricated by simulation surgery using preoperative (T0) Computed tomography (CT) images. Mandibular reconstruction was performed with OCFF using the 3D surgical guide. Postoperative CTs were taken immediately, 1 week (T1), and 6 months (T2) after surgery, to evaluate the reproducibility of the 3D surgical guide and condyle stability. Error of the 3D surgical guide ranged from 0.85 to 2.56 mm. There were no differences in reproducibility according to flap type. Condylar error and error at mandible midpoint were significantly different in FFF. However, there was no difference in DCIA error between the condyle and mandible midpoint. Regarding condyle stability 6 months after surgery, condyles moved more than 2 mm (up to 2.85 mm) in FFF, whereas there were no significant movement in DCIA. Careful intraoperative flap fixation and closed postoperative observation should be considered for stable clinical outcome, especially in the case of FFF. View Full-Text
Keywords: three dimensional printing; microvascular flap; mandible reconstruction three dimensional printing; microvascular flap; mandible reconstruction
►▼ Show Figures 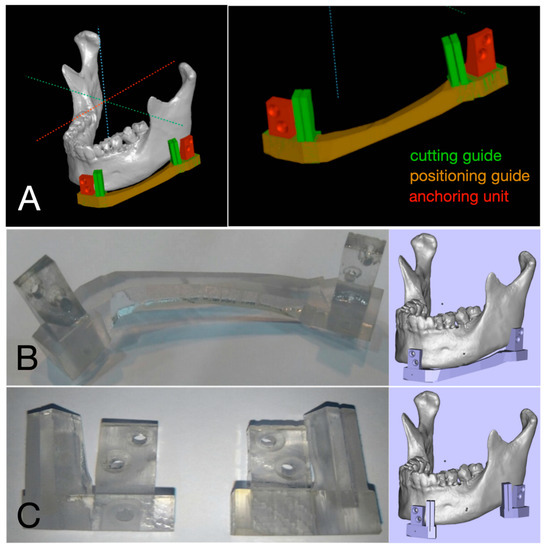