Hysteretic behavior of random particulate composite was analyzed using the stochastic finite element method and three independent probabilistic formulations, i.e., generalized iterative stochastic perturbation technique of the tenth order, Monte-Carlo simulation, and semi-analytical method. This study was based on computational homogenization of the representative volume element (RVE), and its main focus was to demonstrate an influence of random stress in constitutive relation to the matrix on the deformation energies stored in the effective (homogenized) medium. This was done numerically for an increasing uncertainty of random matrix admissible stress with a Gaussian probability density function, for which the relations to the energies of the entire composite were approximated via the weighted least squares method algorithm. This composite was made of two phases, a hyper-elastic matrix exhibiting hysteretic behavior and a linear elastic spherical reinforcing particle located centrally in the RVE. The RVE was subjected to a cyclic stretch with an increasing amplitude, and computations of deformation energies were carried out using the finite element method system ABAQUS. A stress–strain history of the homogenized medium has been presented for the extreme and for the mean mechanical properties of the matrix to illustrate the random hysteresis of the given composite. The first four probabilistic moments and coefficients of the RVE deformation energy were determined and have been presented in addition to the input statistical scattering of the admissible stresses. View Full-Text
Keywords: particulate composites; hyper-elasticity; hysteresis; stochastic perturbation technique; homogenization method particulate composites; hyper-elasticity; hysteresis; stochastic perturbation technique; homogenization method
►▼ Show Figures 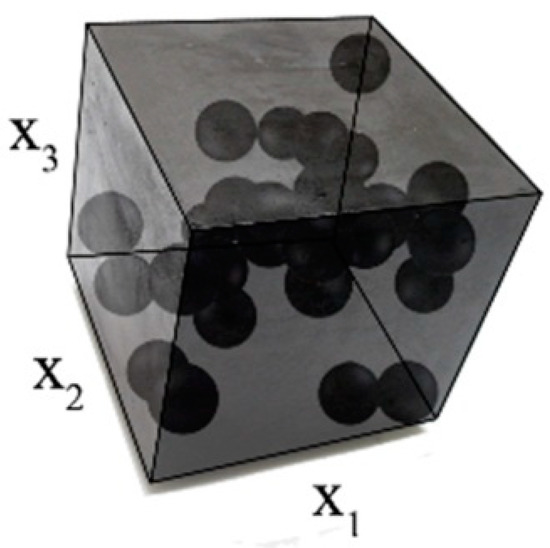