From Local Structure to Overall Performance: An Overview on the Design of an Acoustic Coating

Due to the significant advantages of steel-concrete composite beams, they are widely used for accelerated bridge construction (ABC). However, there is still a lack of experimental research on the proper design of ABC, especially in the slip with a different group of shear connectors. As a component of steel-concrete composite structure, shear studs play a vital role in the performance of composite structures. This paper investigates the influence of group studs in simply supported and continuous box girders. To this end, three sets of simply supported steel-concrete composite small box girders and two continuous steel-concrete composite small box girders were made with different groups of shear studs, and the slip generated along the beams was recorded under different caseloads. The results were then compared with the proposed simplified equations. The results show that the slip value of the test beam is inversely proportional to the degree of shear connection. The slip of Simply Supported Prefabricated Beam-3 (SPB3) is 1.247 times more than Simply Supported Prefabricated Beam-1 (SPB1), and 2.023 times more than Simply Supported Prifabricated Beam-2 (SPB2). Also, the slip value of Experimental Continuous Beam-1 (ECB1) is 1.952 times more than Experimental Continuous Beam-2 (ECB2). The higher the degree of shear connection, the smaller the maximum slip value. View Full-Text
Keywords: slip; group studs; composite beam; accelerated bridge construction; steel fiber slip; group studs; composite beam; accelerated bridge construction; steel fiber
►▼ Show Figures 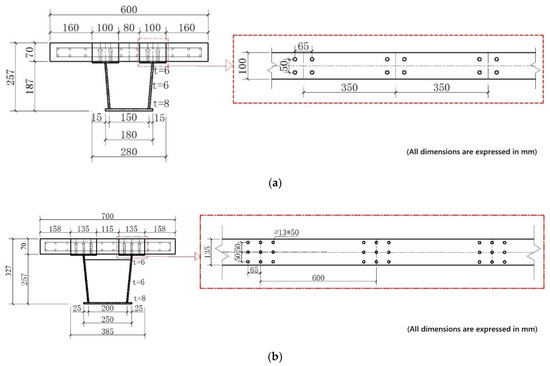