:
The aim of this paper is to prepare and characterize partially-oxidized graphite oxide and consider if it is possible to affect the level of oxidation of particles by an adjustment of the oxidizing agent. Several samples were prepared, using different amounts of oxidizing agent. The samples were subsequently analyzed. The C/O ratio was evaluated from XPS, EDS, and EA. The amount and type of individual oxygen functionalities were characterized by XPS, Raman spectroscopy, and cyclic voltammetry. The structure was studied by SEM and XRD. Thermal stability was investigated by STA-MS in argon atmosphere. The results can be useful in order to design simple technology for graphite oxide synthesis with required oxygen content.
Keywords:
graphite oxide; modified Tour method; partial oxidation; graphene derivatives

Research on 2D carbon-based nanomaterials has become very intensive since the discovery and first successful isolation of graphene in 2004 [1,2]. Many different procedures of the preparation [3] and further functionalization of graphene have been reported [4]. The top-down approach is one of the possible methods for its mass production [5]. This method is based on graphite/graphene oxidation, followed by the subsequent reduction/exfoliation of graphite/graphene oxide. This is possible due to the increase in interlayer distance between individual carbon layers [6,7,8].
On the other hand, for the fabrication of precise monolayer graphene material, the bottom-up approach has to be used [9]. The most broadly used method is chemical vapor deposition (CVD), where small saturated carbohydrates, such as methane, are decomposed at a reachable temperature, around 900 °C, on a highly smoothed copper or nickel surface [10,11]. Another approach is the decomposition of silicon carbide (SiC), since it is directly prepared on the silicon wafer surface. Nevertheless, the fabrication of ultrapure SiC itself represents a technological issue and is not reachable in large-scale production [9]. Interestingly, a method for the precise patterning of graphite/graphene has been reported [12].
Since the first preparation of graphite oxide (GO) in the 19th century [13], several possible structures for this material have been reported [14,15,16,17,18,19]. Generally, graphite oxide is a lamellar compound consisting of carbon layers. These layers have been wrinkled during the oxidation process due to change in the hybridization of carbon atoms, with the simultaneous addition of oxygen-containing functionalities (hydroxyls, epoxides, ketones, carboxyls, etc.). Carboxyl functionalities are usually found at the edges of individual layers. Other oxygen functionalities, such as hydroxyls, epoxides, or ethers, used to be found on the surface of the layers [6]. Nevertheless, the exact structure of the prepared material is strongly influenced by the starting material used, oxidation process, and even purification process [6,20,21]. Compared to pristine graphite, the interlayer distance significantly increases during the oxidation, from 3.4 Å to 6–12 Å, based on the procedure [6,22,23]. The interlayer distance within individual graphene sheets is a crucial factor for subsequent exfoliation or further processing. Also, the presence of water molecules intercalated into the interlayer space is obvious and cannot be ignored when describing GO [24]. The C/O ratio is also very dependent on the method used and can vary significantly. Usually, a C/O ratio from 1.8 to 2.5 can be achieved in fully oxidized GO. Recently, Dimiev et al. reported that the C/O ratio does not change significantly with the addition of more than four equivalents of potassium permanganate compared to original graphite, and this addition is, thus, not necessary [24].
Since graphite is a very inert mineral, it can undergo oxidation only with very strong oxidation agents. There are several methods for graphite oxide production [13]. These methods are usually termed in literature according to their inventors. Graphite oxides can be prepared from graphite by electrochemical [25] or chemical approaches [26]. Chemical approaches are based on the oxidation of carbon-based precursors (graphite, graphene, nanographite, amorphous carbon, single- and multiwall carbon nanotubes). The structure of the resulting graphite oxide and the presence of specific oxygen functionalities is strongly affected by the procedure used, which is caused by a different mechanism of oxidation [27,28]. Basically, two common oxidizing agents are used to prepare graphite oxide: potassium permanganate [29] and potassium chlorate [30,31]. Procedures using chlorates lead to the synthesis of graphite oxide with mainly hydroxyl and epoxy functionalities, and the planar structure of the material is preserved, whereas procedures using permanganate provide a product with mostly carboxyl functionalities and the wrinkled structure is observed [32]. In the recently described method of graphite oxidation, which is sometimes termed the Tour method [33], graphite powder is oxidized in a mixture of sulfuric and phosphoric acid in the ratio 9:1, respectively, using potassium permanganate as an oxidizing agent. Phosphoric acid is crucial for stabilizing the reaction. The recommended ratio of graphite and potassium permanganate is 1:6. Another modification of this method has been reported, where the time of the heating can be reduced to up to one hour instead of the original 12 [34]. Interestingly, a procedure using potassium ferrate (VI) as an oxidizing agent has been reported due to its extraordinarily strong reduction potential [35]. However, in an acidic environment K2FeO4 is not stable, since it can oxidize water in aqueous solutions [36].
Graphite oxide is not only a precursor for graphene synthesis, but it is also itself a suitable material for membrane fabrication [37] or for various hybrid materials [38,39]. Graphene oxide is also an essential material for the synthesis of functionalized graphene (e.g., halogenated or hydrogenated graphene [32,40]). Graphite oxide prepared via permanganate oxidation can also undergo subsequent re-oxidation [41,42]. During this reaction, the typical graphene structure disappears, forming an “amorphous” structure called graphene acid. This re-oxidation process led mainly to the formation of carboxyl functionalities in the sample. Graphene acid has a great potential to remove heavy metals from waste water [43,44] or for the synthesis of highly selective membranes.
As apparent from the previous literature overview, there are many papers dealing with graphite oxidation, however, only a few papers address the synthesis of partially-oxidized graphite oxides. The aim of this paper is to prepare and characterize partially-oxidized graphite oxide and consider whether it is possible to affect the structure and the level of oxidation by an adjustment of the oxidizing agent.

In this paper, samples of partially-oxidized graphite oxide (poGO) were prepared by graphite oxidation. For the oxidation, different amounts of potassium permanganate were used. The prepared poGOs were subsequently analyzed in order to determine the oxidation level. The chemical composition of the samples was studied by EA, XPS, and EDS. It was found that the oxygen content increased proportionally to the amount of oxidizing agent. The interlayer distances in poGOs also increased, as well as the surface area of the poGOs. The obtained results were supported by STA-MS, where weight loss during the heating increased with the level of oxidation. Let us note that the results are only applicable to graphite of this particle size, they can vary significantly with starting material of different particle sizes. The results of our research can be useful for the fast, safe, and cost-effective synthesis of partially-oxidized graphite oxides. By oxidation using potassium permanganates we are able to tune the chemical composition. Samples with exact chemical composition can be used in various composite materials, e.g., in conductive polymers for wearable electronics (PEDOT/GO composites), for water-treatment (membranes or filters), or in building materials (self-cleaning surfaces). In addition, partially-oxidized graphite oxides with higher oxygen content can be used for the synthesis of thermally reduced graphene or as reactive precursors for further chemical modifications. 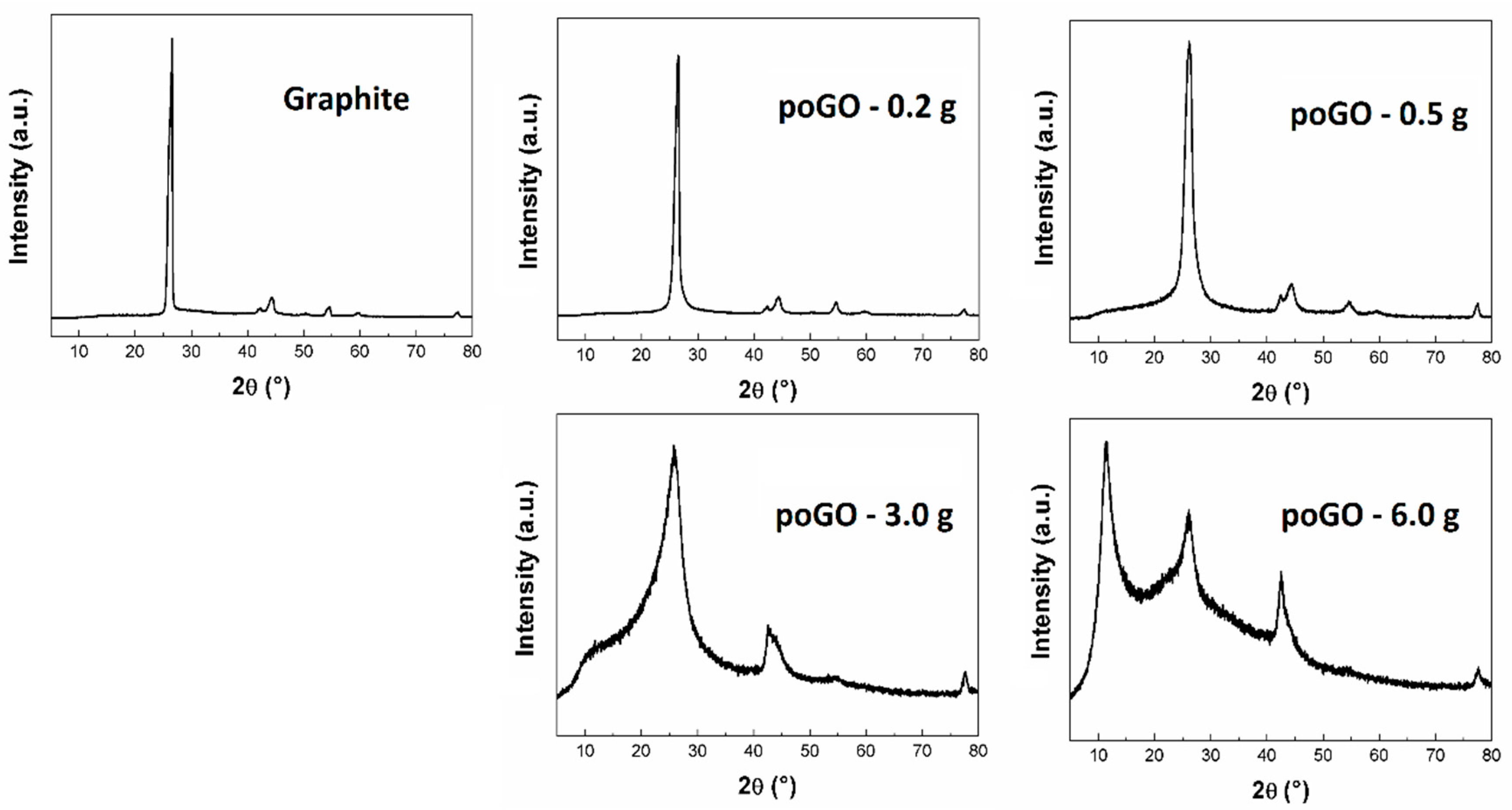 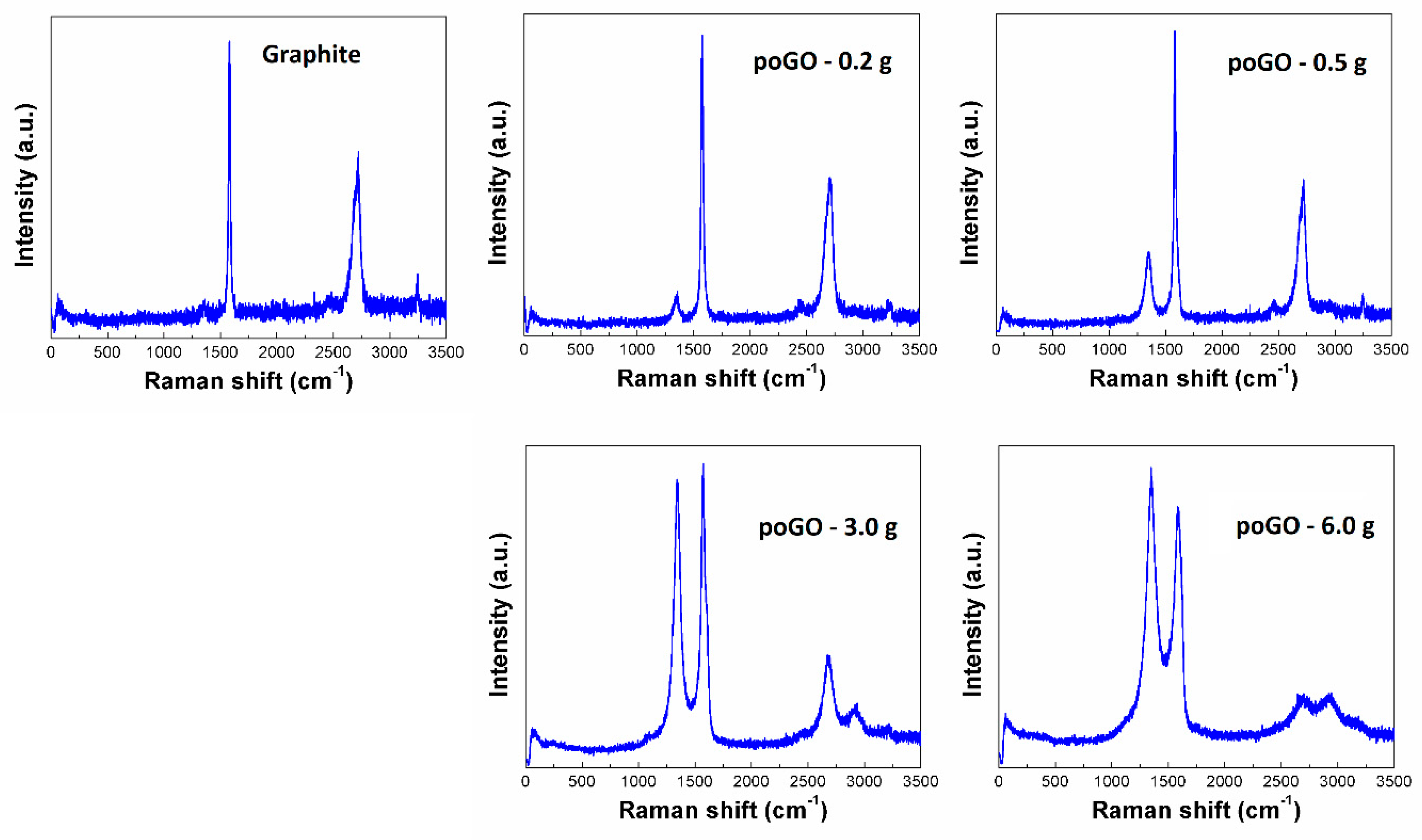