The optical phenomenon of SPR occurs when the incident He-Ne laser light is reflected from the metal-dielectric interface under certain resonance conditions. Basically, when an electromagnetic wave of incident light hits a metal film, the free electrons on the metal collectively oscillate in waves, thus producing charge density waves propagating along the metal-dielectric interface (Figure 1a). These charge fluctuations, called surface plasmon waves (SPW), are accompanied by an evanescent field and decay exponentially with distance from the surface. The waves that correspond to the evanescent field are evanescent waves and are given by [85]: where , is the wave vector in the transmitted medium, is the incident angle, and and are the refractive indices of the prism and transmitted medium, respectively. These waves are strongly sensitive to any refraction index alteration in the dielectric medium adjacent to the metal surface [23,86]. In order to satisfy the SPR resonance condition, the incident light must be in transverse magnetic (TM) mode, known as p-polarized light, to excite SPW. P-polarized is needed because its electric field vector is oriented perpendicular to the metal film, which can be expressed as follows: where , , and are the amplitude, the wave vector, and the angular optical frequency of the electrical field, respectively, and and are unit vectors, as shown in Figure 1b. The second condition for the surface plasmon wave excitation is given by kx = ksp, where kx is , ksp is approximated as , np is the refractive index of the prism, is the real part of the dielectric constant of the metal, and Ɛ2 is the dielectric constant for the dielectric medium in contact with the metal surface. The coupling of two waves vector of the evanescent wave, kx, with that of the surface plasmons, ksp, results in a sharp dip of SPR signal at resonance angle (θSPR) as shown in Figure 1c.

Figure 2 shows the SPR setup system, where a derivative thin film was attached to a prism surface using a refractive-index-matching fluid. This prism was then placed on an optical stage driven by a stepper motor from 48° to 60° (Newport MM 3000). Light from the laser source (632.8 nm, 5 mW) was then shone onto the sensor film surface. The reflected light was collected by a photodiode and then processed by a lock-in-amplifier (SR 530). A 100 µL flow chamber was attached to the derivative thin film to be filled up by the sample solution for the detection system. For the detection system, 0.1 pM DENV solution was injected into the chamber using a syringe pump. The SPR measurement was carried out continuously from 0 to 20 min for each concentration of DENV solution.

3.1. Graphene-SPR Based Materials for DENV Detection

As illustrated in Figure 3, the first step to develop a sensor film made of gold/cadmium sulfide quantum dots-reduced graphene oxide/antibodies (Au/CdSQDs-rGO/Ab) film is to deposit a glass cover-slip (24 mm × 24 mm × 0.1 mm, Menzel-Glaser, Germany) with an Au layer using a sputter coater (50 nm, 20 mA). Next, the spin coating technique was applied to deposit the CdSQDs-rGO composite solution on top of the Au surface (30 s, 6000rpm). The coated film was then incubated in 2 mM of N-Ethyl-N-(3-(dimethylaminopropyl) carbodiimide (EDC; Fluka) and 5 mM of N-hydroxysuccinimide (NHS; Sigma Aldrich) (EDC/NHS) solution for 15 min, followed by 0.01 µM Ab immobilization. Figure 4a–c depicts the SPR signal for the Au, Au/Ab, and Au/CdSQDs-rGO/Ab sensor film generated by the detection of 10 pM DENV solution. As expected, no response was observed with the gold film without immobilization of Ab. From Figure 4b, the shift in SPR resonance angle can be observed when a gold film was immobilized with Ab. Subsequently, the shift in SPR resonance angle increased rapidly by 0.0438° due to the immobilization of the antibodies to the sensor surface, thus confirming the potential of Au/CdSQDs-rGO/Ab sensor film as a DENV-sensing material.
Further, the developed sensor film was exposed to various concentrations of DENV solution ranging from 0.1 pM to 100 pM, as shown in Figure 5. The DENV solutions were injected one after another into the flow chamber to be in contact with the sensor film for 20 min under room temperature. Prior to that, the phosphate buffer saline (PBS) solution was first injected into the flow chamber to obtain the reference SPR signal. The obtained resonance angle was 53.954°. When 0.1 pM DENV solution was subsequently introduced, the resonance angle was right-shifted to 53.968°. The increase in the resonance angle indicated that the DENV antigen had been bound onto sensor film through the specific interaction between DENV and monoclonal antibodies. This phenomenon can cause changes in sensor film thickness, and, hence, increases its refractive index. The changes in SPR angle were greater when the higher concentration of DENV solution (1 pM–100 pM) were introduced. However, the change in SPR angle resulted in a left-shift in resonance angle. It was apparent that the immobilization of biorecognition molecules was moving further apart from the previous binding, thus decreases the plasmonic coupling [87]. The limit of quantitation obtained with the proposed sensor was 0.1 pM DENV solution.
The reaction between the sensor film and the DENV antigen was evaluated using the Langmuir model, which can be expressed as follows: where Δθmax is the maximum SPR shift at the saturation, C is the concentration of DENV, and KD is the equilibrium dissociation constant. As shown in Figure 6a, the fitting graph yielded a KD value of 9.13 pM with R2 of 0.98. Moreover, the binding affinity, KA, of the sensor film to the DENV antigen, determined as the inverse proportional to KD, was 0.10948 pM−1. The sensitivity of the sensor film was then determined by plotting a linear graph from 0 pM to 10 pM DENV solution. The linear fit showed a good response with the sensitivity value of 0.0055°/pM (R2 = 0.62). The selectivity test was also tested by detecting 100 pM human serum albumin (HSA), and the mixture of HSA and DENV solution. As shown in Figure 6b, the resonance angle shift for DENV antigen was higher than that for HSA, which indicated a high selective binding towards the immobilized antibodies on the sensor film. Aside from that, as it can be seen, the resonance angle shift for the detection of the DENV + HSA solution was greatly increased due to the non-specific binding of the high molecular weight of HSA.

The surface plasmon resonance technique integrated with graphene oxide-based material can also be applied for metal ion detection, as illustrated in Figure 7. Cobalt is a trace element that can be found widely in nature. One of the biological functions of cobalt is as a metal component of vitamin B12, also known as cyanocobalamin. However, excessive intake of cobalt and other cobalt compounds can be toxic to the human body, as reported by previous researchers [88,89,90]. Therefore, chitosan-graphene oxide-cadmium sulfide quantum dots (Chitosan-GO-CdS QDs) composite thin film was developed as a sensor layer for cobalt ion detection via surface the plasmon resonance sensor. The potential of the graphene oxide based sensor layer for biosensor application to detect cobalt ion was evaluated by exposing the sensor layer with deionized water and also with the different concentrations of cobalt ion (0.1 ppm, 1 ppm, 10 ppm, and 100 pm). Initially, deionized water was used to obtain the reference SPR signal, and then was furthered by introducing different concentration of cobalt ion on the sensor layer. The SPR curves of the experiment were obtained, as shown in Figure 8. From the SPR curves, the resonance angles of the deionized water, 0.1, 1, 10, and 100 ppm of cobalt ion obtained were 53.934°, 53.952°, 54. 025°, and 54.057°, respectively, as shown in Figure 7. The introduction of the cobalt ion on the sensor layer caused the resonance angle to shift to the right, and, as the concentration of cobalt ion was increased, the resonance angle shift also increased. This result confirmed the potential of the sensor layer to detect cobalt ion in low and higher concentrations.
The angle shift value was then calculated and a graph was plotted for the degree of the resonance angle against concentration, as shown in Figure 9. The plotted data was then fitted with the Langmuir equation to obtain the binding affinity, KA and the maximum angle shift at the saturation of the SPR curves, Δθmax. From the Langmuir fitting, the sensor layer showed a high binding affinity toward the cobalt ion, with an affinity constant of 5.4357 ppm−1 with an R2 value of 0.8224. The high binding affinity of the sensor layer toward the cobalt ion may due to the electrostatic force between the graphene oxide sheets and also the CdS QD element. Complementary to this, the Langmuir fitting also showed that the saturation value of the sensor layer occurred when the concentration of the cobalt reached 10 ppm, with a maximum angle shift of 0.1865. In addition, the sensitivity of the sensor was 0.01937 ° ppm−1, which was determined by obtaining the slope of the linear fitting of the data from 0 to 10 ppm. These results show that the sensor layer has a great potential to detect cobalt ion.

This research was funded by the Malaysian Government for the fund support through Putra Grant Universiti Putra Malaysia (Putra Grant 9531500 & 9627300).

The laboratory facilities provided by the Department of Physics, Department of Chemistry, and Institute of Advanced Technology, Universiti Putra Malaysia, are also acknowledged. 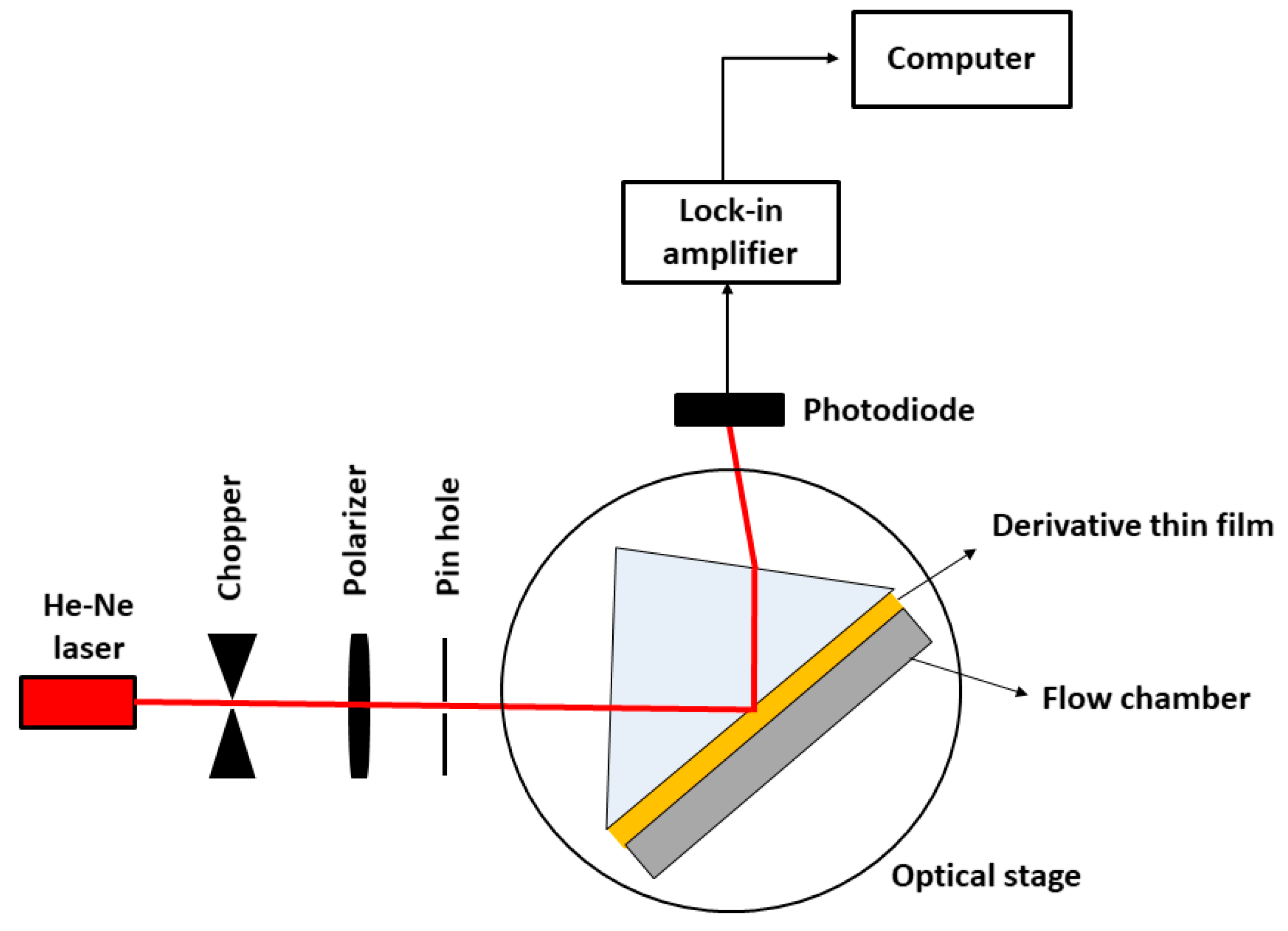 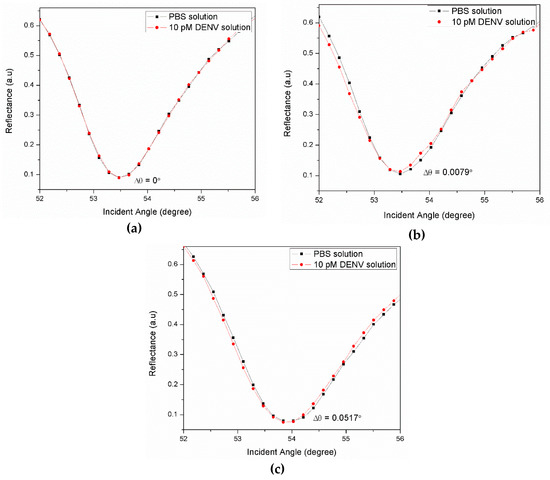 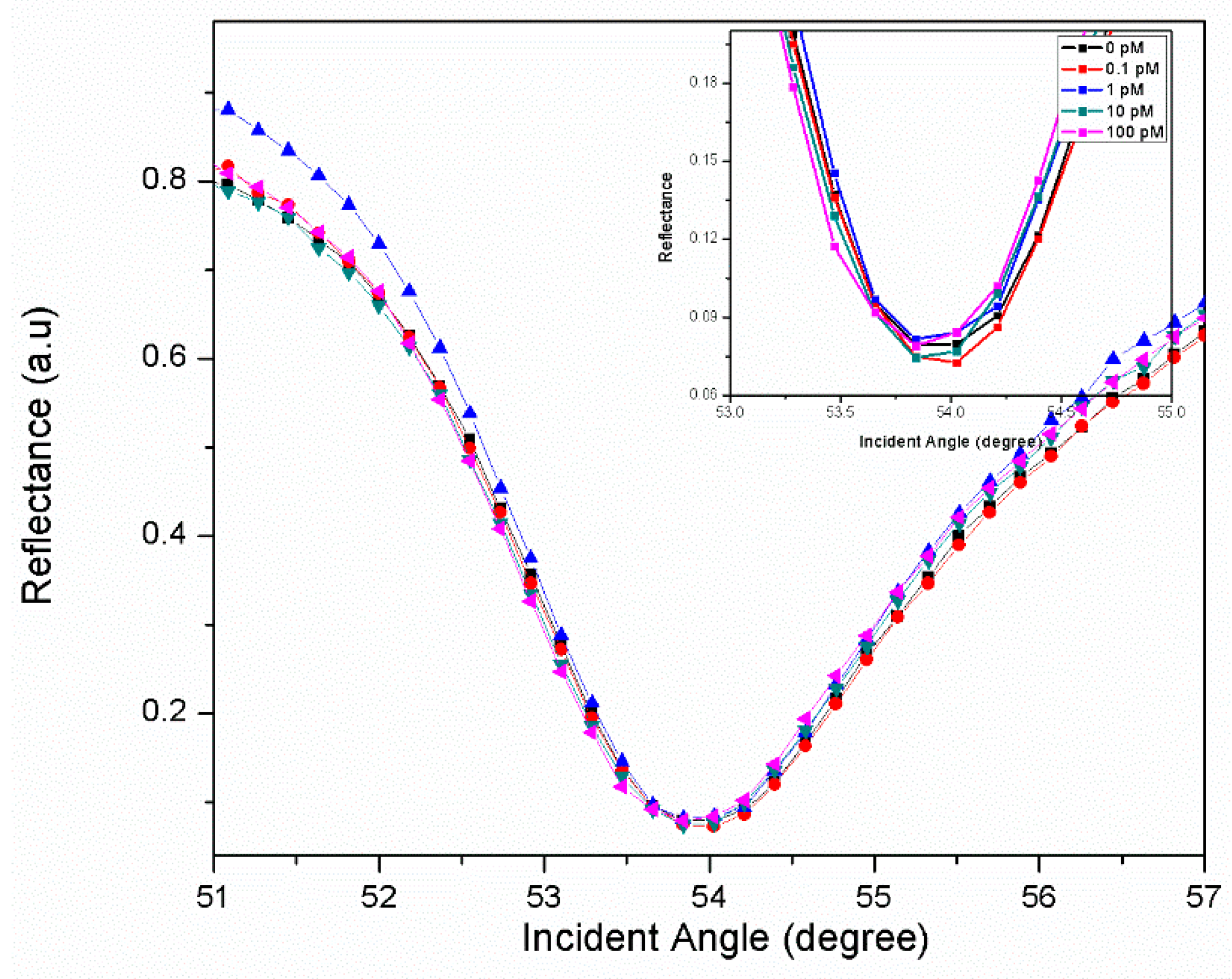 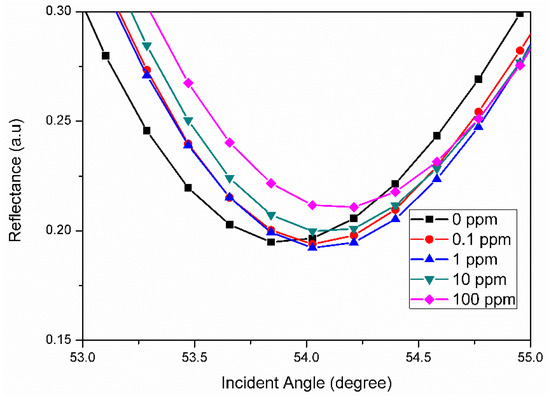 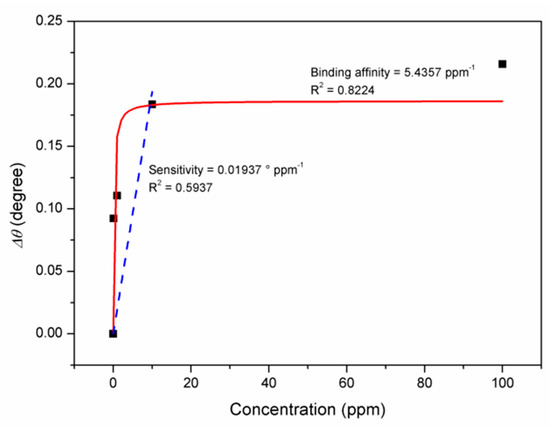 Table 2. Graphene-SPR-based materials in metal ions sensing.
Table 2. Graphene-SPR-based materials in metal ions sensing.
© 2019 by the authors. Licensee MDPI, Basel, Switzerland. This article is an open access article distributed under the terms and conditions of the Creative Commons Attribution (CC BY) license (http://creativecommons.org/licenses/by/4.0/).
We use cookies on our website to ensure you get the best experience. Read more about our cookies here.
Accept
We have just recently launched a new version of our website. Help us to further improve by taking part in this short 5 minute survey here. here.
Never show this again