Here we explore the structural properties and damage sensing of cementitious mortars after a freeze-thaw process (F-T) as a function of nano-modification. For this purpose, carbon nanotubes were added at 0.2–0.8 wt.% cement using two different dispersive agents. F-T resulted in reduced fracture energy in nano-modified specimens prepared using superplasticizer as a dispersant while the opposite held true for the surfactant-containing ones. All nano-modified mortars possessed significantly higher fracture energy compared to the plain specimens after F-T (up to 73% improvement). The acoustic emission activity was lower after F-T, while acoustic emission indicators revealed a more tensile mode of fracture in both plain and nano-modified mortars.
Keywords: CNTs; dispersive agents; freeze-thaw; fracture; damage monitoring CNTs; dispersive agents; freeze-thaw; fracture; damage monitoring

Over the last two decades, carbon nanotube (CNT) modified cementitious composites [1,2,3,4,5,6] have been investigated with focus on two main aspects: a) the improvement of their performance and b) the production of multifunctional, smart and self-sensing materials [7,8,9]. The ability of CNTs to bridge micro-cracks and delay their propagation [10,11,12] has been proven beneficial for the fracture behavior of cementitious materials [13,14]. It has been documented that the fracture strength, toughness as well as flexural toughness index is considerably increased after the addition of low amounts of single- and multi-walled CNTs in cementitious pastes and mortars [3,13,15,16,17]. Furthermore, mechanical and fracture studies combined with acoustic emission (AE) measurements also demonstrate the enhanced damage sensing capability of cementitious materials modified with carbon nano-inclusions [18,19].
An environmental parameter of huge significance for the fracture behavior and integrity of cementitious materials is the freeze-thaw (F-T) cycling encountered in cold environments. F-T can damage cementitious materials by creating internal cracking due to cold temperature cycling. When water freezes, it exhibits a 9% volume increase that may cause deterioration either to the hardened paste, the aggregates, or both [20]. Since water is contained within the pores of the cementitious matrix destructive tensile stresses varying between 1N/mm2 and 4N/mm2 may be generated, depending on the exposure temperature, the connectivity of the pores and the degree of saturation [21,22,23]. This may result in internal micro-cracks at an early exposure stage while repeated F-T cycles may cause permanent damage to the material. The extent of deterioration depends on the conditions of exposure of the material and its transport properties, i.e. its water absorption profile. Thus, damage due to F-T may occur with low-temperature cycling combined with a high degree of saturation (>86%) [24,25].
Several studies suggest a beneficial role of carbon-based nano-inclusions on the microstructure [3,4,5,6,7,17,26,27] and in turn water sorption and water permeability [28,29,30] of cementitious materials. This has been mainly attributed to the refinement of pores and reduction in pore connectivity and bridging. Since pore structure and water permeability are of enormous significance for the F-T response of cementitious materials the addition of CNTs is also expected to greatly affect their performance after F-T cycling [31]. Indeed, recent studies demonstrate a considerable increase of the mechanical properties and dimensional stability of cementitious composites after the addition of small amounts of CNTs [32,33,34]. It has been suggested that the optimized performance of CNT-modified cementitious materials is linked with the aforementioned bridging effect of CNTs as well as the decreased fraction of large-capillary pores caused by the incorporation of the nano-phase inclusions [33]. Elsewhere however a more rapid deterioration of the relative dynamic modulus of CNT-modified composites after F-T cycling is presented in comparison to un-modified specimens [35].
It is well accepted that the dispersion of CNTs is of huge significance for the performance of cementitious materials. Insufficient dispersion has been related to the agglomeration of CNTs and in turn, inadequate stress transfer, crack initiation due to stress concentration around agglomerates and limited sensing potential [36]. CNTs are commonly dispersed by an agent (surfactant or plasticizer) in the water of the cementitious mixture, a procedure which is normally supported by the application of sonication [2,3]. The selection of type/concentration of dispersive agents is however not straightforward due to limitations in the dispersion ability of plasticizers and substantial increase of the air content values in the case of surfactants [37]. Quite recently we have demonstrated that the nature of dispersive agents determines the microstructure, absorption and barrier properties of CNT-modified cementitious mortars [37].
Based on the above, the present study contributes to current knowledge by exploring the effect of F-T on the structural properties and damage detection capability of nano-modified cementitious mortars. The dynamic modulus of elasticity, compressive strength, and fracture energy were examined before and after F-T cycling while damage sensing was monitored via AE measurements. Two different agents were used to support CNT dispersion in the cementitious matrix, one belonging to the surfactant and the other to the superplasticizer family. CNT content varied between 0 and 0.8 wt.%, in order to cover the range below and above the multi-functionality threshold of approximately 0.5–0.6 wt.% [9,38].

CNTs (“ONEX MW1000C1”) with a 20 to 45 nm diameter and a length over 10 μm were purchased from Glonatech SA, Athens, Greece. Two dispersive agents were used in the current study, an anionic surfactant (sodium-dodecyl-benzene sulfonate, Sigma-Aldrich, Taufkirchen, Germany) particularly popular for CNT separation and an anionic, polycarboxylate based superplasticizer (Viscocrete Ultra 300, Sika Hellas SA., Krioneri, Greece) specific to suspensions targeted for nano-modified cementitious materials [37]. Portland cement type I and natural sand were used for the preparation of the cementitious mortars. When necessary, tributyl-phosphate (TBP) (Sigma-Aldrich, Taufkirchen, Germany) and Viscocrete ultra 600 (Sika Hellas SA., Krioneri, Greece) were applied to adjust the air content and workability of the fresh mortars, respectively.

BS EN 196-1 was followed for the preparation of the mortar specimens. Specimen’s preparation procedure is schematically illustrated in Figure 1, while details on the preparation procedure can be found elsewhere [37]. In brief, the water to cement (w/c) ratio was set at 0.5 while the sand to cement (s/c) ratio was 3. A constant amount of cement (450 g), water (225 g) and sand (1350 g) were used for the preparation of all mortars. First, CNTs (0.2–0.8 wt.% of cement) were dispersed in the water of the mixture following a procedure developed by members of our research group [36,39]. For optimum dispersion and limited alteration of the physical properties of the prepared mortars, the surfactant’s concentration was kept as low as 50% of CNTs, while the respective amount of superplasticizer was as high as 150% [36,38,39]. CNT-based suspensions were then mixed together with cement and sand for the preparation of the nano-modified mortars. In the case of surfactant-assisted mixtures, a constant amount of TBP (0.7 g) was also added together with the CNT-based suspensions. Workability was fixed by adding an appropriate amount of Viscocrete Ultra 600 (up to 2 g) at the end of the mixing procedure. Mixtures were molded for 24h and then demolded and stored in a humid environment for 27 days.

F-T conditions were simulated using an environmental chamber (Vötsch VC 4018, Vötsch Industrietechnik GmbH, Balingen, Germany) according to ASTM C666 [40]. Six saturated specimens of each composition were placed in the chamber and subjected to 300 F-T cycles. Each cycle included 4 h of freezing at −18 °C (dry conditions) and 4 h of thawing at 4 °C (relative humidity approximately 98%). An equal number of un-modified and CNT-modified mortars were stored in a laboratory environment for reference (un-exposed specimens, designated as “before F-T” specimens).

Ultrasound experiments were conducted on un-modified and CNT-modified mortars employing R15a AE sensors (Physical Acoustics Corp, Princeton, NJ, USA), fixed on the two opposite sides of the mortar beams [19]. The dynamic elastic modulus, E, was calculated according to Equation (1): where Ed is the dynamic elastic modulus in GPa, Cp is the longitudinal wave velocity in m/s, ρ is the density of mortar beams in Kg/m3, and ν the Poisson’s ratio.
Compression tests were conducted according to BS EN 196–1:2005 standard [41] on a MATEST mortar testing machine (Matest, Arcore, Italy) with a loadcell of 250 kN. Cubic specimens (40 × 40 × 40 mm3) were tested at a rate of 1.5 MPa/s.
The fracture energy of the un-modified and CNT-modified mortars was assessed using notched beams as illustrated in Figure 2, according to Reference [19]. The notch on each prismatic specimen (40 × 40 × 160 mm3) was cut to half of the prism’s height (i.e., 20 mm) [19]. Three-point bending experiments were conducted on an Instron 5967 (Instron, Norwood, MA, USA) 30 kN testing machine at a speed of 0.02 mm/s. An Instron clip on gauge was used to monitor the crack mouth opening displacement (CMOD) of the notch. Details on the test configuration and experimental set-up are provided elsewhere [19,42]. The fracture energy (Gf) in N/m of all specimens was calculated using Equation (2) [19,42]: where Wo is the area under the load-CMOD curve, m is the weight of the device participating in the experiment (kg), g is the acceleration due to gravity (9.81 m/s2), δo the CMOD of the beam at fracture (m), and Alig is the area of the ligament (m2) [19,42].
Damage monitoring was performed using two R15a AE sensors, with max sensitivity at 150 kHz, attached on the specimen at a distance of 40mm, as illustrated in Figure 2. Details on the experimental set-up can be found in our previous publication [19].
Statistical calculations (mean values and standard deviation) were performed on the results of six specimens.

The current study investigated the durability of CNT-modified cementitious mortars after F-T cycling. CNTs were dispersed using two different types of agents, one belonging to the superplasticizer and the other to the surfactant family. Structural properties were assessed based on the dynamic elastic modulus, compressive strength and fracture energy of notched specimens under 3-point bending configuration. The obtained results led to the following conclusions:

This research project was implemented through the Operational Program “Human Resources Development, Education and Lifelong Learning” and was co-financed by the European Union (European Social Fund) and Greek national funds.

The authors wish to thank the MSS-NDE Laboratory of the University of Ioannina for providing access to the concrete technology lab, mechanical testing and AE facilities. 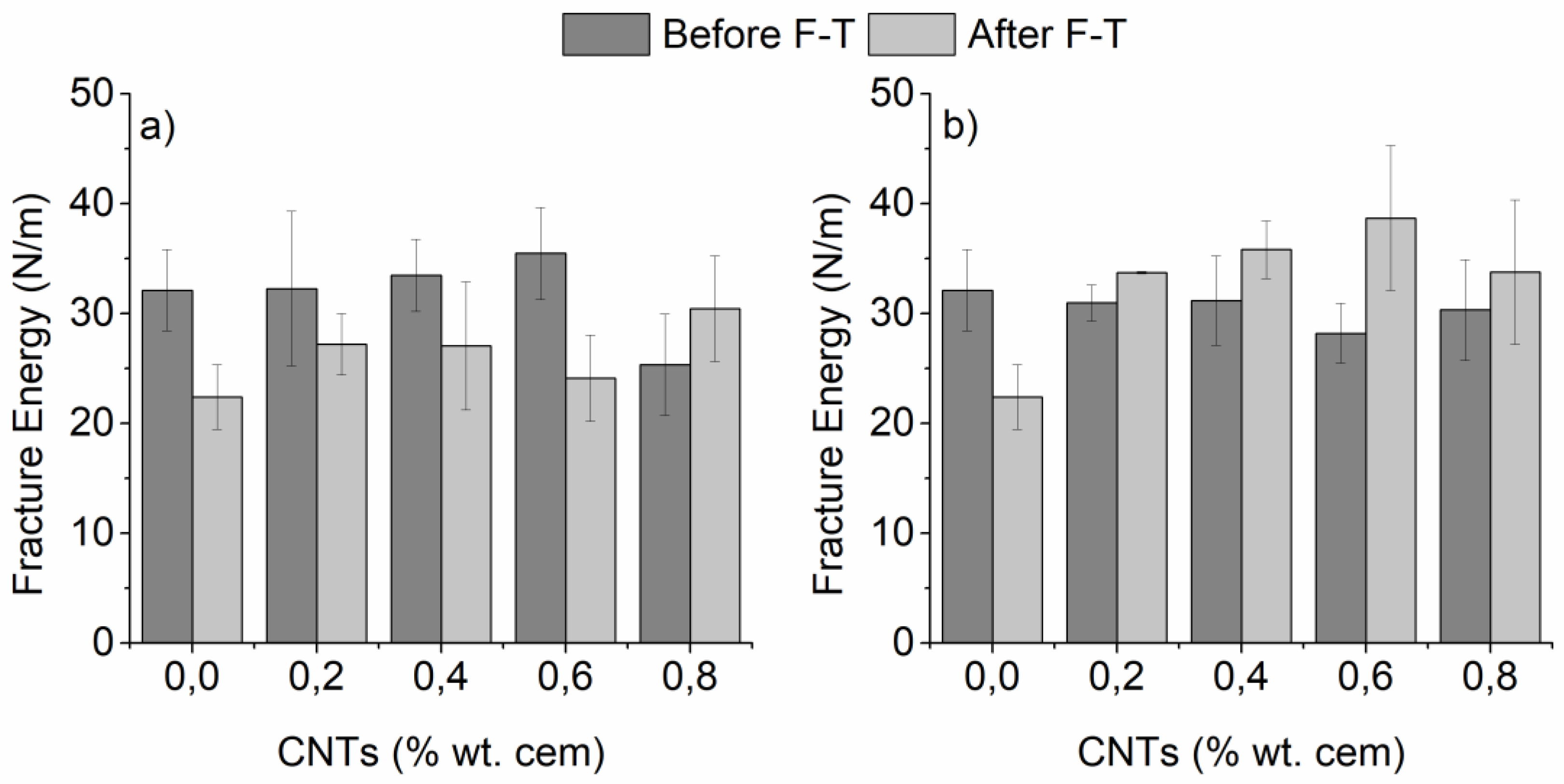 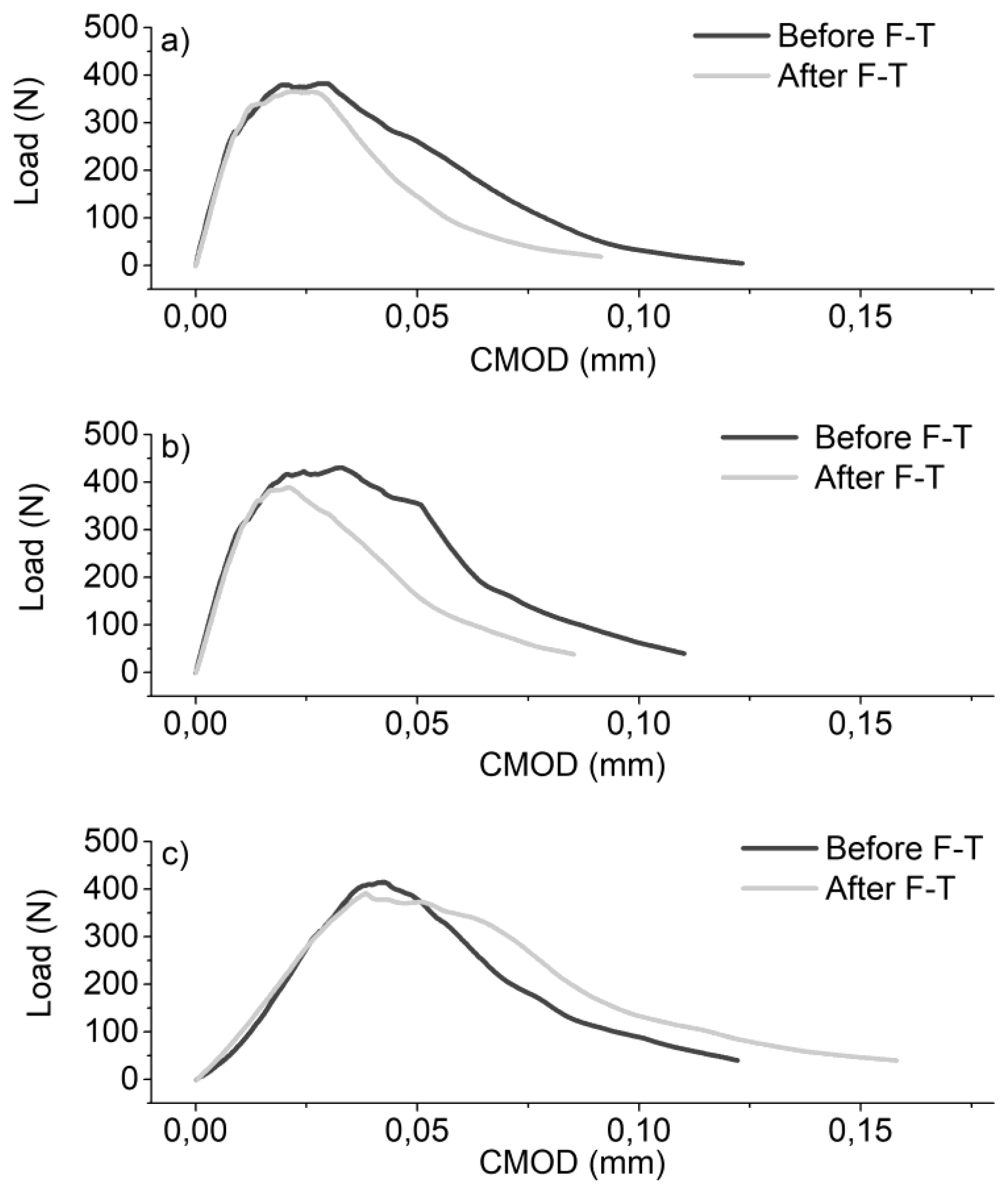