Calcium silicate-based cement has garnered huge interest in recent years, due to its versatility and potential in mass fabrication of a variety of bioceramics. For this study, the main objective was to fabricate functionalized calcium silicate (CS) powder integrated with a simple bio-inspired surface modification using polydopamine (PDA), to regulate cellular behaviors such as cellular adhesion, and subsequently cell differentiation and proliferation. For this study, scanning electron microscopy (SEM) and X-ray photoelectron spectroscopy (XPS) techniques were used to analyze the chemical compositions and observe the surface characteristics of our PDA coated CS cements. Such modifications were found to enhance Wharton Jelly’s mesenchymal stem cells (WJMSC) in various ways. Firstly, PDA-coated CS cements were found to significantly enhance cell adhesion with higher expressions of cell adhesion markers, such as focal adhesion kinase and integrins. This was further supported by morphology analysis of the cells. This enhanced cell adhesion, in turn, led to significantly higher secretion of extracellular matrix (ECM) proteins, such as collagen I and fibronectin, which directly promoted cell attachments and proliferation. In our osteogenesis assays, it was found that secretion and expression of osteogenesis related genes and proteins were significantly higher and were dependent on the PDA content. Therefore, these results demonstrated that such simple bio-inspired modification techniques of synthetic degradable CS cements can be applied as a future modification, to modify and convert inert surfaces of synthetic bone grafts to enhance and modulate the cell behaviors of WJMSCs. This in turn can be used as a potential alternative for further bioengineering research. View Full-Text
Keywords: calcium silicate; dopamine; bone cement; bio-inspired; tissue engineering; osteogenic calcium silicate; dopamine; bone cement; bio-inspired; tissue engineering; osteogenic
►▼ Show Figures 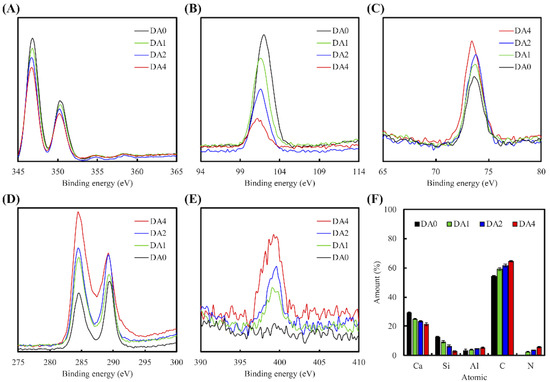