Origin of the Low Magnetic Moment in Fe2AlTi: An Ab Initio Study
Previous Article in Journal

We use quantum-mechanical calculations to test a hypothesis of Glover et al. (J. Mag. Mag. Mater. 15 (1980) 699) that Co atoms in the FeAlCo compound have on average 3 Fe and 3 Co atoms in their second nearest neighbor shell. We have simulated four structural configurations of FeAlCo including the full Heusler structure, inverse Heusler polymorph and two other phases matching this idea. The highest thermodynamic stability at T = 0 K is indeed predicted for one of the phases with the distribution of atoms according to Glover and et al. However, small energy differences among three of the studied polymorphs lead to a disordered CsCl-structure-like (B2-like) phase at elevated temperatures. The fourth variant, the full Heusler phase, is predicted to be mechanically unstable. The global magnetic states are predicted to be ferromagnetic but local magnetic moments of Fe and Co atoms sensitively depend on the composition of the first and second coordination shells. View Full-Text
Keywords: CoAlFe2; AlCoFe2; Fe2CoAl; AlFe2Co; Heusler; disorder; ab initio; stability; elasticity CoAlFe2; AlCoFe2; Fe2CoAl; AlFe2Co; Heusler; disorder; ab initio; stability; elasticity
►▼ Show Figures 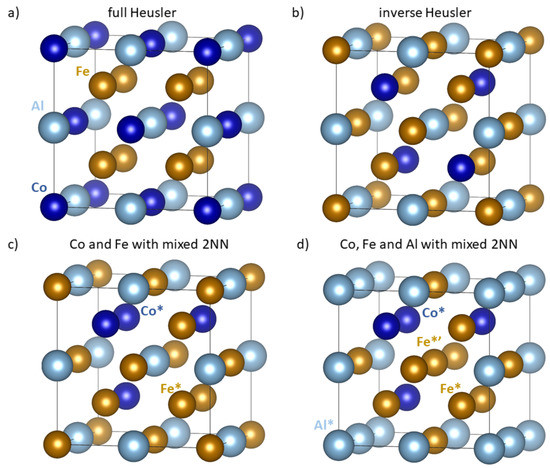