Copper powder has broad applications in the powder metallurgy, heat exchanger, and electronic industries due to its intrinsically high electrical and thermal conductivities. However, the ease of formation of surface oxide or patina layer raises difficulty of storage and handling of copper powder, particularly in the case of Cu microparticles. Here, we developed a thermal chemical vapor deposition chemical vapor deposition (CVD) process for large-scale synthesis of graphene coatings on Cu microparticles, which importantly can remain monodisperse without aggregation after graphene growth at high temperature by using removal spacers. Compared to other protective coating methods, the intrinsic electrical and thermal properties of Cu powder would not be degraded by uniform growth of low defect few-layer graphene on each particle surface. As a result, when the anticorrosion performance test was carried out by immersing the samples in Cu etchant, the corrosion rate of graphene/Cu microparticles was significantly improved (ca three times slower) compared to that of pristine Cu powder, also showing a comparable anticorrosion ability to commercial CuZn30 alloy.
Keywords: chemical vapor deposition (CVD) growth; graphene/Cu microparticles; removal spacers; monodisperse; corrosion resistance chemical vapor deposition (CVD) growth; graphene/Cu microparticles; removal spacers; monodisperse; corrosion resistance

Copper powder is an industrial raw material for the fabrication of various electrically and thermally conductive components, such as pantograph contact strips, electrical connectors, and heat sinks [1,2,3]. The widespread applications of copper powder are due to the high electrical (6.0 × 107 S/m) and thermal conductivities (κ: 400 W/mK) after sintering to bulk, and both are only lower than those of silver (6.3 × 107 S/m and 420 W/mK, respectively) among metals [4,5]. However, compared to silver, with the copper surface it is easier to form an oxide or patina layer when exposed to humid air over a long time [6,7], leading to the technical difficulty of storage or transport of copper powder which needs to be hermetically sealed, especially in the cases of micro- and nanoparticles due to their high specific surface area. In order to avoid the surface oxidation and corrosion, some techniques have been extensively employed, such as the formation of corrosion-resistant alloys (Cu-Ni, Cu-Zn, etc.) [8,9], electroplating of the inert metal layers (Cr, Zn, etc.) [10], and cladding with protective organic coatings [11]. However, the use of the above methods also brings some disadvantages, for example, the degradation of thermal conductivity in the alloy system (e.g., ≈272 W/mK in B0.6 Cu-Ni alloy) [8], or no longer being compatible with the further production process (like powder metallurgy) when copper powder is coated with a polymer. Therefore, it is strongly required to develop a technique for the improvement of corrosion resistance of copper powder, while maintaining its excellent inherent physical properties.
Graphene, a one-atom-thick carbon layer composed of honeycomb sp2-bonded lattice [12], has attracted intense interests in both academia and industry since 2004 [13], due to its ultralow electrical resistivity (theoretically: ≈10−8 Ω m), high specific surface area (over 2000 m2/g), and chemical inertness [14,15]. Accordingly, diverse applications based on graphene and its derivatives have been proposed and developed over the past ten years. In particular, graphene shows much promise for permeable barrier applications because of its impermeability to standard gases, liquids, and ions in aqueous media [16]. Therefore, graphene as a nanometer-thick barrier has been previously reported, enabling the significant reduction of toxic vapor permeability and an oxidation resistance improvement of metals [17]. Compared to the graphene sheets exfoliated from graphite, the graphene film grown by catalytic chemical vapor deposition (CVD) has much lower defect concentration, showing advantages in preventing the corrosion of metal substrates (Cu, Ni, etc.) in oxidative environments [17,18]. Chen et al. indicated that single-layer CVD graphene provides effective resistance against hydrogen peroxide, thereby protecting the surface of Cu and Cu-Ni alloy [17]. In addition, Parra et al. demonstrated that the Ni surface with graphene coating grown by CVD corrodes five times slower than that covered with mechanically transferred graphene [19]. It suggests that the growth of CVD graphene on copper powder might be able to efficiently protect the surface from oxidation/corrosion, and not degrade the intrinsic electrical/thermal properties. However, considering the melting point of copper (1085 °C), this raises a technical challenge to prevent sintering of copper powder during graphene growth at high temperature (commonly up to 1000 °C) [20,21]. Due to the self-limited growth mechanism, the decrease of CVD temperature would lead to a substantial rise of defect density in the resulting graphene film [22,23]. Alternatively, Lee et al. encapsulated copper particles with a polymer layer as the solid carbon source and then synthesized graphene/copper particles by further annealing [24]. However, the very high ID/IG ratio (≈0.86) in the Raman spectrum indicates the limited quality of the obtained graphene. As a result, the formation of high-quality, low-defect graphene on the surface of copper powder without aggregation is of major importance for the development of potential anticorrosion applications.
In this paper, we report a large-scale synthesis process for preparing Cu microparticles uniformly encapsulated by few-layer graphene. In particular, graphene-coated Cu (Gr/Cu) microparticles remain monodisperse after CVD growth, which was implemented by separation of Cu microparticles with removal graphite spacers to prevent Cu aggregation at high temperature. Compared to other coating techniques, the formation of a thin graphene layer on the surface of each Cu particle almost does not affect its intrinsic electrical and thermal properties. In addition, the corrosion rate of Gr/Cu microparticles was three times reduced compared to the pristine Cu powder and comparable to that of CuZn30 alloy when the samples were immersed in Cu etchant, demonstrating superior anticorrosion ability of Gr/Cu microparticles.

In summary, we developed a facile CVD process for the synthesis of monodisperse Gr/Cu microparticles in a large quantity using graphite particles as removal spacers, by which the particle size of the obtained products is similar to that of Cu powder and no aggregation is observed, even though the CVD temperature is close to the melting point of copper. The graphene coatings with few-layer thickness on Cu microparticles show superior barrier capability against corrosion in Cu etchant, achieving ca. three times improvement compared to the pristine Cu powder. Moreover, we demonstrated that the anticorrosion performance of Gr/Cu microparticles is comparable to that of CuZn30, suggesting promising applications of our products in powder metallurgy, conductive ink, and electronic materials.

S.L. and B.H. conceived and designed the experiments; S.L., D.D., S.S., and M.W. performed the experiments; S.S. and A.L. helped the sample characterizations. Y.H., Z.Z., B.C., Y.D., and Q.Z. analyzed the data; Q.W. and N.J. helped with the mechanism explanation; C.L. and S.S. wrote the manuscript draft; N.J. reviewed the draft and made comments; C.L. contributed reagents/materials/analysis tools and proposed the idea.

This research was funded by the State Grid Corporation of China science and technology project (SGRIDGKJ [2016] 795). 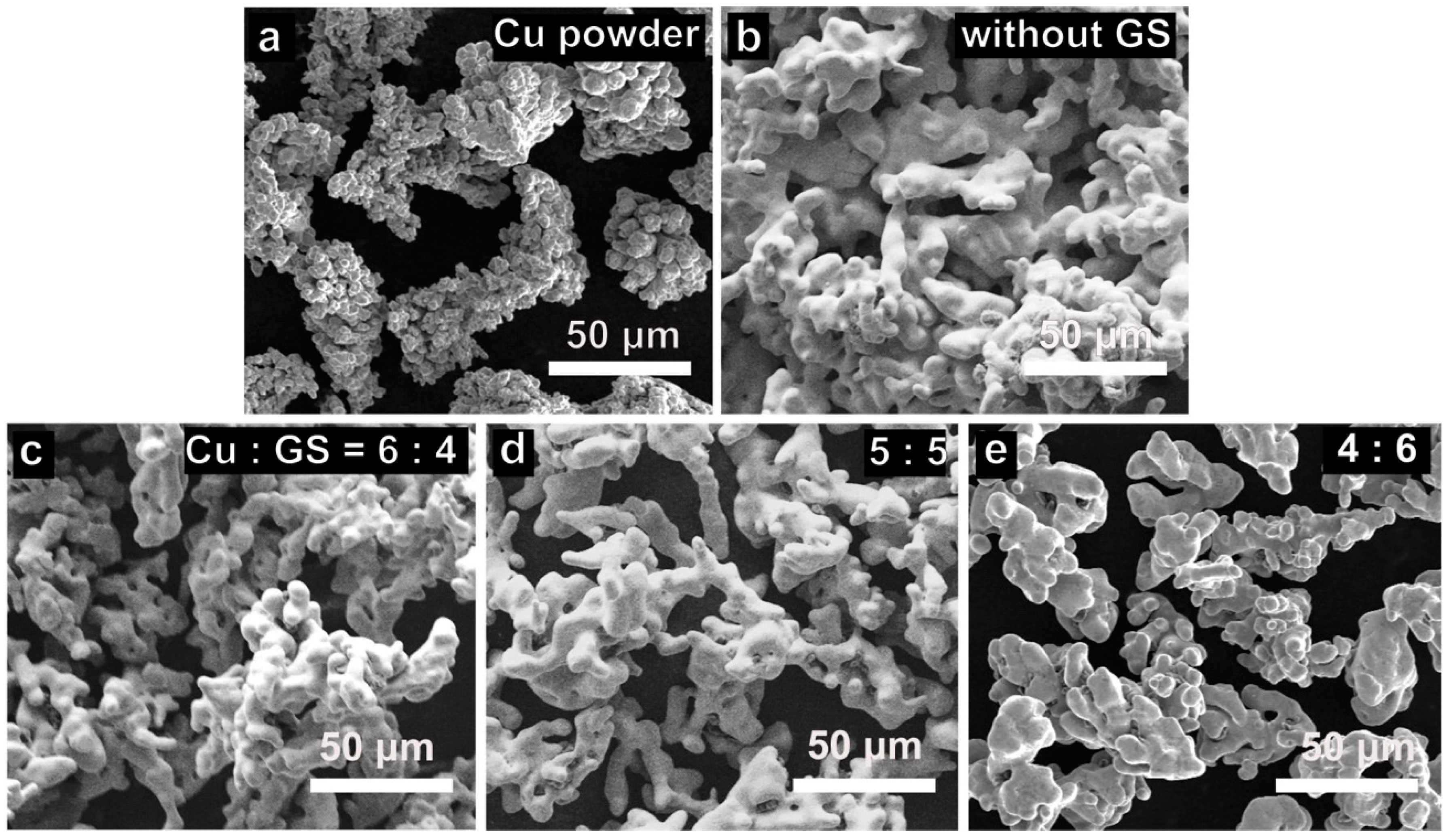 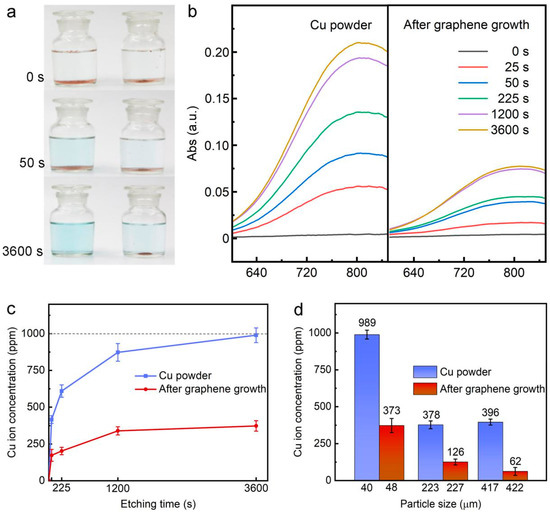 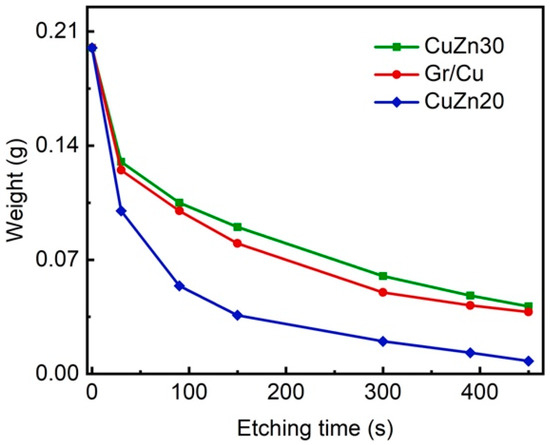