Pseudoelastic NiTi shape memory alloys exhibit different stress–strain curves and modes of deformation in tension vs. compression. We have recently shown that under a combination of compression and shear, heterogeneous deformation can occur. In the present study, we use digital image correlation to systematically analyze how characteristic features of the nominally uniaxial engineering stress–strain curves (particularly the martensite nucleation peak and the plateau length) are affected by extensometer parameters in tension, compression, and the novel load case of shear-compression. By post-experimental analysis of full surface strain field data, the effect of the placement of various virtual extensometers at different locations (with respect to the nucleation site of martensite bands or inhomogeneously deforming regions) and with different gauge lengths is documented. By positioning an extensometer directly on the region corresponding to the nucleating martensite band, we, for the first time, directly record the strain-softening nature of the material—a specific softening behavior that is, for instance, important for the modeling community. Our results show that the stress–strain curves, which are often used as a basis for constitutive modeling, are affected considerably by the choice of extensometer, particularly under tensile loading, that leads to a distinct mode of localized deformation/transformation. Under compression-shear loading, inhomogeneous deformation (without lateral growth of martensite bands) is observed. The effects of extensometer gauge length are thus less pronounced than in tension, yet systematic—they are rationalized by considering the relative impact of differently deforming regions. View Full-Text
Keywords: deformation/strain analysis; digital image correlation (DIC); NiTi shape memory alloys; stress-induced martensitic transformation; virtual extensometer deformation/strain analysis; digital image correlation (DIC); NiTi shape memory alloys; stress-induced martensitic transformation; virtual extensometer
►▼ Show Figures 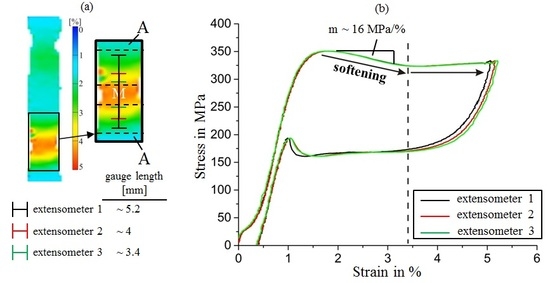