Graphene quantum dots (GQDs) decorated Al-doped ZnS composites were prepared using the solvothermal process, and the hydrothermal method was used to prepare GQDs. Various spectroscopic techniques were used to characterize the products, and the results show that Al-ZnS attached GQD composites present lattice fringes that can be assigned to ZnS and GQDs, respectively. The absorption peaks of Al-ZnS/GQDs are red-shifted because of the doping of aluminum and the incorporation of GQDs. The luminescence intensity of Al-ZnS/GQDs shows a downward trend with the addition of GQDs. As the GQD content changes from 0.6 wt % to 1.8 wt %, the photocurrent density achieves a maximum at the addition of 1.2 wt %. The photocurrent of Al-ZnS/GQDs composites are about 700% and 200% of pure ZnS and Al-ZnS, respectively. The results indicate that Al doping can reduce the energy bandgap of ZnS and produce more photogenerated electrons. The photogenerated electrons from Al-ZnS can be extracted and transferred to GQDs, which act as conducting materials to decrease the recombination rate and improve the photogenerated electron-transfer. View Full-Text
Keywords: Al doping; Al-ZnS/GQDs; photocurrent-time test; electrochemical impedance spectra Al doping; Al-ZnS/GQDs; photocurrent-time test; electrochemical impedance spectra
►▼ Show Figures 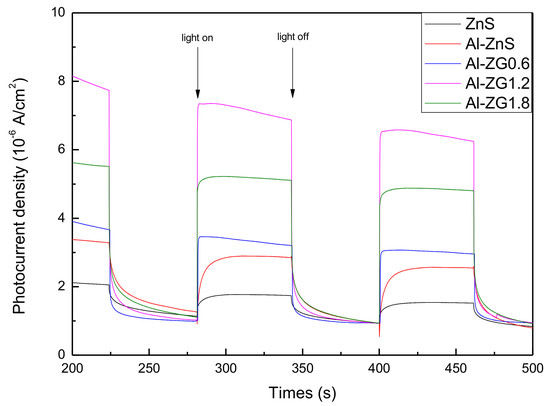