The production of hydrogen by water splitting has been a very attractive idea for several decades. However, the energy consumption that is necessary for water oxidation is too high for practical applications. On the contrary, the oxidation of organics is a much easier and less energy-demanding process. In addition, it may be used to consume organic wastes with a double environmental benefit: renewable energy production with environmental remediation. The oxidation of organics in a photoelectrochemical cell, which in that case is also referenced as a photocatalytic fuel cell, has the additional advantage of providing an alternative route for solar energy conversion. With this in mind, the present work describes a realistic choice of materials for the Pt-free photoelectrochemical production of hydrogen, by employing ethanol as a model organic fuel. The photoanode was made of a combination of titania with cadmium sulfide as the photosensitizer in order to enhance visible light absorbance. The cathode electrode was a simple carbon paper. Thus, it is shown that substantial hydrogen can be produced without electrocatalysts by simply exploiting carbon electrodes. Even though an ion transfer membrane was used in order to allow for an oxygen-free cathode environment, the electrolyte was the same in both the anode and cathode compartments. An alkaline electrolyte has been used to allow high hydroxyl concentration, thus facilitating organic fuel (photocatalytic) oxidation. Hydrogen production was then obtained by water reduction at the cathode (counter) electrode. View Full-Text
Keywords: hydrogen; photoelectrocatalytic; photocatalytic fuel cell; carbon electrode hydrogen; photoelectrocatalytic; photocatalytic fuel cell; carbon electrode
►▼ Show Figures 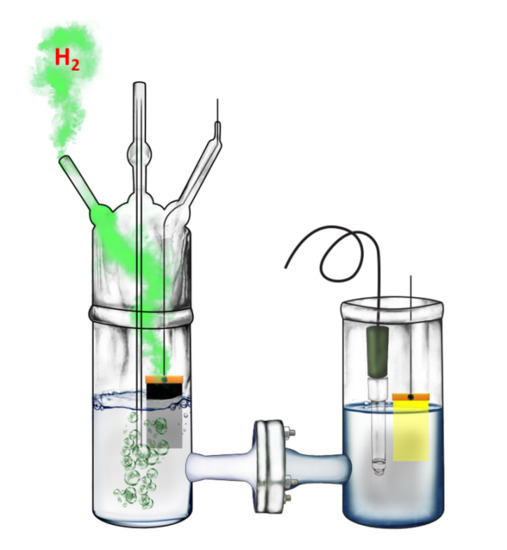