Hot-squeezed chrome bronze QCr0.5 and ultra-fine treated 40Cr steel have been successfully welded using an electro-superplastic solid-state welding technique. Results have shown that the tensile strength of a 40Cr/QCr0.5 weld joint can be greatly increased, up to or exceeding that of QCr0.5 base metal. The weld interface between 40Cr and QCr0.5 has achieved metallurgical bonding and there are less micro-gaps, thicker transition regions and more copper convexes and dimples on the fracture surface of the 40Cr side when applying an external electrical field of E = 3 kV/cm, as well as with other welding parameters, including no vacuum, no shield gas, a pre-pressure of 56.6 MPa, an initial strain rate of 1.5 × 10−4 s−1, a pressure welding temperature of 710–800 °C, and a pressure welding time of 0–8 min.
Keywords: copper alloys; steel; electro-superplastic solid-state welding; strength; metallurgical bonding copper alloys; steel; electro-superplastic solid-state welding; strength; metallurgical bonding

For this study, hot-squeezed chrome bronze QCr0.5 and hot-rolled and annealed 40Cr steel were used as experimental materials. Table 1 outlines the chemical compositions of the two materials. For the welding tests, cylindrical samples of the dimensions Φ15 × 25 mm were machined for both materials. After sanding with different sizes of metallographic sandpaper, the welding surfaces of the specimens were polished on a polishing machine for about 20 min. The roughness (Ra) of the weld surfaces was measured to be in the range of 0.103–0.187 µm. It should be noted that the weld surface of the QCr0.5 and 40Cr should be cleaned with alcohol and acetone before welding.

Figure 1 is a schematic showing the experimental setup for electro-superplastic solid state welding. For each test, one QCr0.5 sample and one 40Cr sample were paired, packed and put into a pressure welding device. The samples were heated by a 3-kW electrical oven with a ±2 °C error of temperature and prepressed under a load of 1000 kg (i.e., a stress of 56.6 MPa for our cylindrical sample of the dimensions Φ15 × 25 mm). As indicated in Figure 2, the samples were kept at a desired temperature for 20 min to ensure that they were uniformly heated to the same temperature. The power supply was then turned on. An external electrical field was then applied to the sample pair about 1 min before welding began. After a certain welding time, the external electrical field was discharged, the load was removed, and the sample pair was air cooled. This whole process was done in air without any shield gas.
Based on References [5,20,21], a superplastic deformation usually takes place at a deformation temperature greater than 0.5 Tm and a strain rate in the range of 10−4–10−2 s−1. Taking this into account, welding parameters for this study were chosen as follows: the temperature was 710–800 °C, the initial superplastic strain rate () was 1.5 × 10−4 s−1, the pre-press was 56.6 MPa and the pressure welding time was 0–8 min.

The extent of welding deformation (shown as the Figure 4) was characterized as the expansion strain εd = (d1 − d0)/d0 on both sides of the weld joint, with d0 being the sample diameter before welding and d1 being the maximum diameter after welding. To determine εd, both d0 and d1 were measured with Vernier caliper for all welded samples. For each data point, three measurements were taken to obtain a mean value. The deformation also caused changes of sample heights. Under the welding conditions tested in this paper, the total height reduction was in the range of about 2–5.6 mm, and the height reduction of QCr0.5 was about 3 times greater than that of 40Cr.
After the expansion measurements, welded samples were machined to flat tensile specimens with the weld joint being located in the middle of the specimen. The testing part of the tensile specimen had a dimension of 15 × 5 × 3 mm. All tensile tests were carried out with an AG I-250kN material testing machine (Shimadzu, Kyoto, Japan) at room temperature. Each tensile strength test was repeated 6 times, and then the mathematical average value was determined and used as a data point in the paper. In order to allow a direct comparison of weld strength and strength of base materials, tensile specimens were machined from both base materials and treated with an initial superplastic strain rate of 1.5 × 10−4 s−1 and pre-press of 56.6 MPa at 740 °C for 4 min before the tensile test. Tensile properties of both base materials are listed in Table 2.

The hot-squeezed chrome bronze QCr0.5 is a quasi-single phase copper alloy. Its microstructure, as shown in Figure 5, consists of the α-matrix with distributed micro-granular Cr. The grain size is about 50 µm. As a quasi-single phase non-ferrous alloy with relatively fine equiaxed grains, the hot-squeezed chrome bronze QCr0.5 meets the microstructure requirement for isothermal super-plasticity and does not need further treatment before welding [23,24].
As shown in Figure 6, the microstructure of hot-rolled and annealed 40Cr steel consists of coarse pearlites (30–50 µm) with small ferrites (5–15 µm). This microstructure is not favorable for a super-plastic deformation during welding [20]. Thus, a so-called ultra-fine treatment is necessary, which adopts a circulating quenching process in the salt bath furnace as depicted in Figure 7. And as shown in Figure 8, the ultra-fine treatment produces a microstructure of acicular martensite that is about 5 µm in length and 0.3 µm in width, which conforms to the microstructure requirement for superplastic welding.

Figure 11 shows tensile strength and expansion strain as a function of welding time. As welding time increases, tensile strength increases also until it reaches a peak strength of about 250 MPa at 4 min, when it then decreases slightly. Specimens fracture at weld interfaces for welding times which are less than 4 min, and in the QCr0.5 base metal for 4 min and longer. It is worth noting that a tensile strength of about 165 MPa (about 70% of the peak strength) is measured even when the welding time is for 0 min. This means that even during heating and preheating (see Figure 2), mechanical combination and partial metallurgical bonding can form to some extent, as reported in the literature [3,5].
Expansion strain increases with the extension of welding time for both materials. This can be attributed to a sort of creep effect. The longer the time, the greater the creep deformation.

In the present work, hot-squeezed chrome bronze QCr0.5 and ultra-fine treated 40Cr steel have been successfully welded using the electro-superplastic solid-state welding technique. Results obtained have shown that the tensile strength of the weld joint can be greatly improved by the application of an external electrical field during the superplastic solid-state welding process. Moreover, the tensile strength of the weld joint can equal or exceed that of the QCr0.5 base metal. This can be attributed to better metallurgical bonding achieved with an electrical field, as confirmed by the above-mentioned 3 major findings in Section 3.5: less micro-gaps, a thicker transition region, and more copper convexes and dimples on the fracture surface for the sample welded with electrical field (Figure 12, Figure 13 and Figure 14).
Micro-gap formation may be understood as being a result of an insufficient vacancy flux during the welding process. At the very beginning of the electro-superplastic solid-state welding process, lots of concentrated vacancies exist at the interface of 40Cr steel and QCr0.5 copper alloy. Vacancies in a metal lattice have a negative charge [6,7,8,9,10,11,12,15,16,17,18], and an electrical field can alter the electrochemical potential of materials [12,13,14,15,16,24]. The charged layer of the metal surface forms in an external electrical field, which can improve vacancy mobility. Therefore, an electrical field can lead to an increased vacancy flux from interior to surface. This way, the vacancy concentration at the welding interface can be reduced, ultimately resulting in less visible micro-gaps at the weld interface in the sample welded with an electrical field (Figure 12).
An electrical field has been found to be able to enhance superplastic deformation of materials [9,13,14,15,17,18]. Larger superplastic deformation means more grain boundary sliding and dislocation movement. Atom diffusion is thus accelerated at the welding interface, and as a result, a thicker transition region is formed in the sample welded with an electrical field (Figure 13).
Due to its softer nature, QCr0.5 starts to plastically deform earlier than the 40Cr during the welding process. This is confirmed by the larger expansion strain measured for the QCr0.5 side (see Figure 9, Figure 10 and Figure 11). Since both vacancy flux and super-plastic deformation can be enhanced by applying an electrical field, a better weld interface of metallurgical bonding is obtained in the sample welded with an electrical field. This, together with the work hardening and alloying effect, makes the weld joint and the QCr0.5 in the vicinity of the weld interface stronger than the QCr0.5 far away from the interface. As a result, samples welded with E ≥ 3 kV/cm resulting in a fracture in the QCr0.5 far away from the interface. On the fracture surface of the notched sample, more copper convexes and dimples were observed (Figure 14), implying that an electrical field is beneficial to obtaining high quality weld joints.
As shown above, a copper alloy QCr0.5 and a steel 40Cr was successfully welded together with an excellent weld strength using the technique reported in this paper. This provides a more economic and time-saving approach to manufacturing different parts involving copper and steel. For example, plungers of plunger pumps are normally made by diffusion welding, which requires a higher welding temperature of 800 °C and a much longer welding time of 1–4 h. Using the technique reported in this paper, this can be done much quicker (4 min) and at a lower temperature (740 °C).

This research was funded by key research projects of higher education institutions in the Henan Province under Grant No. 18A430015. 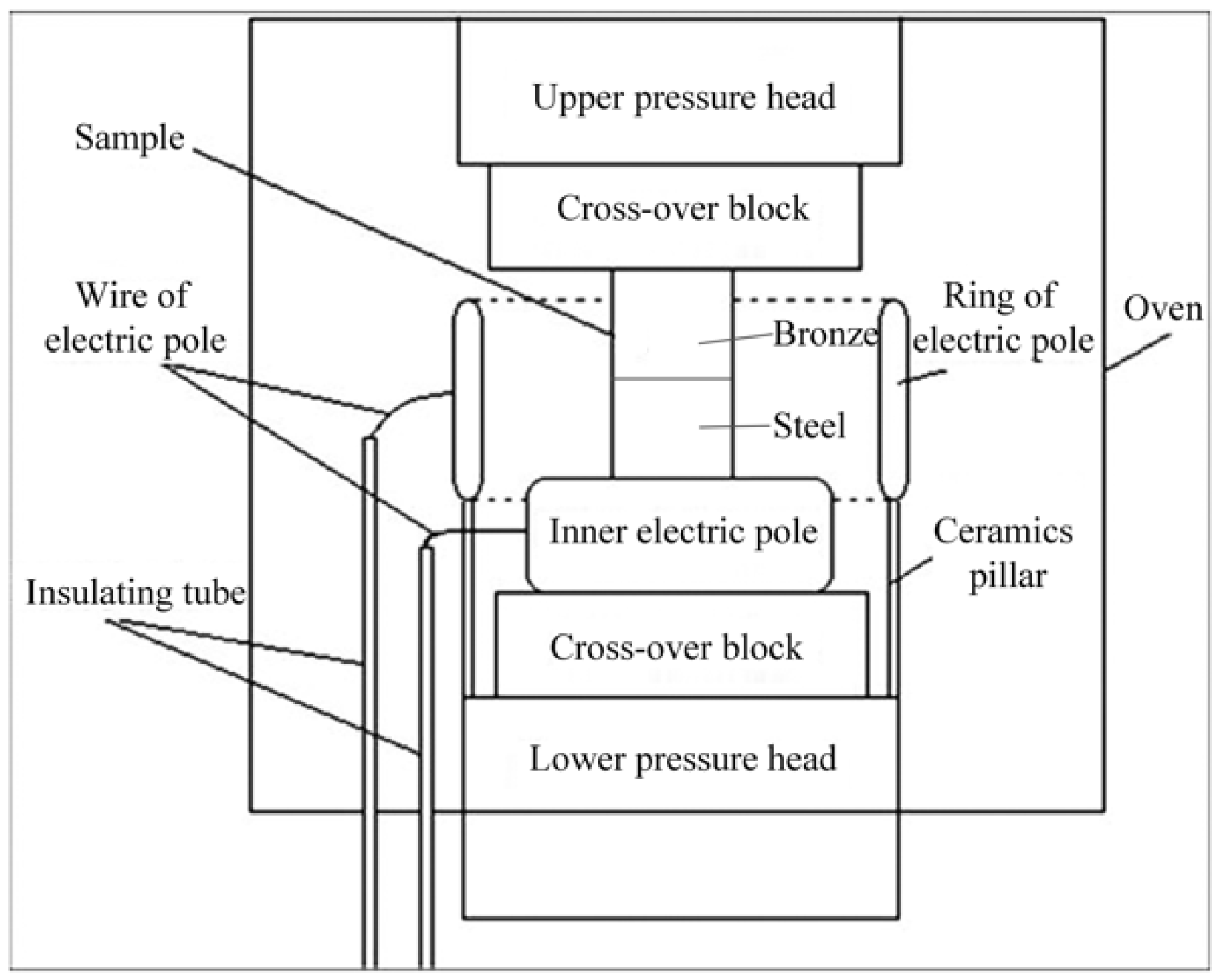 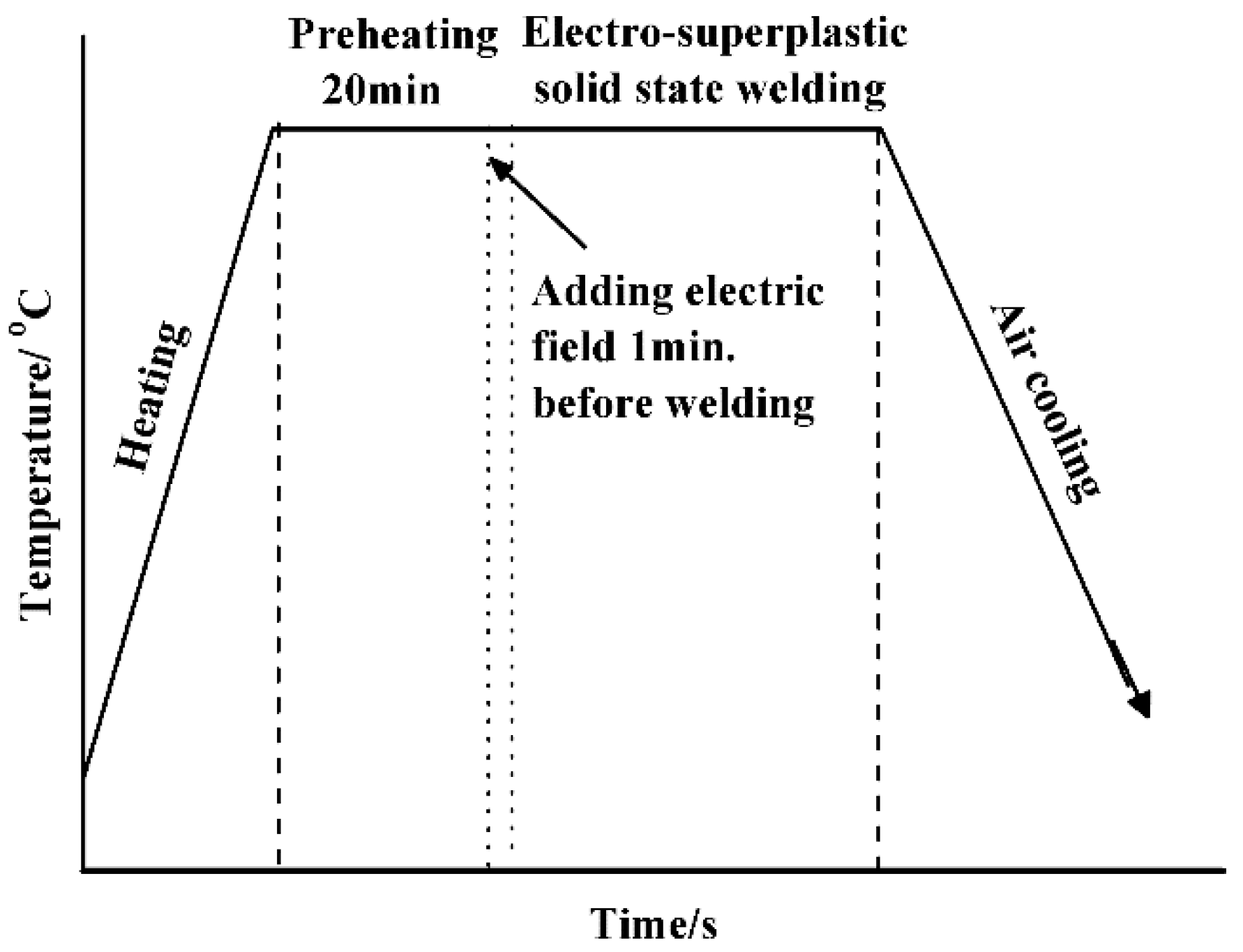 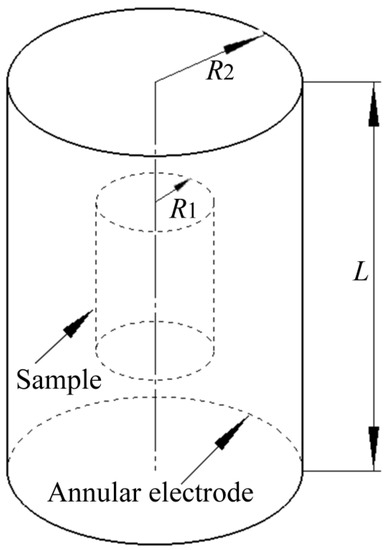 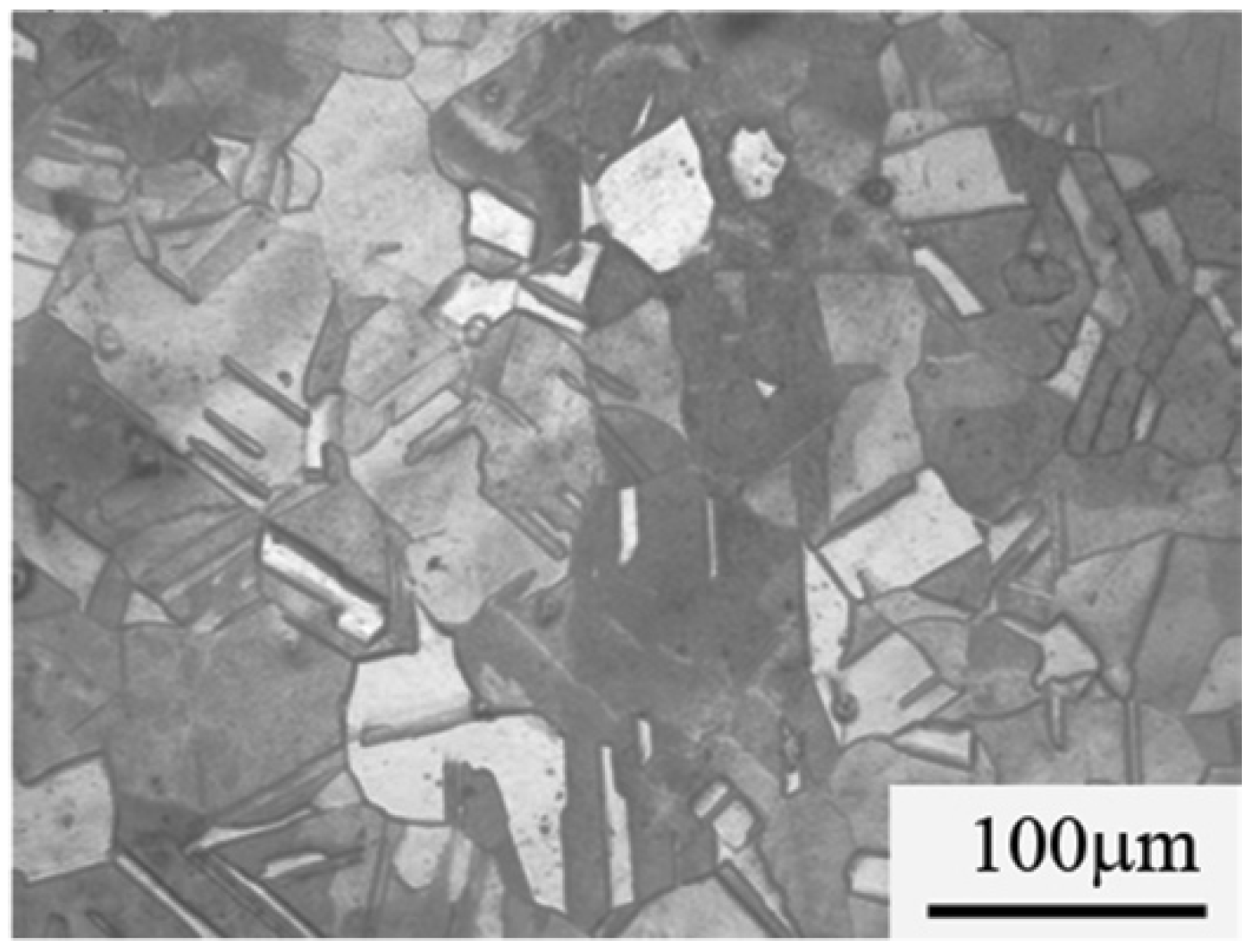 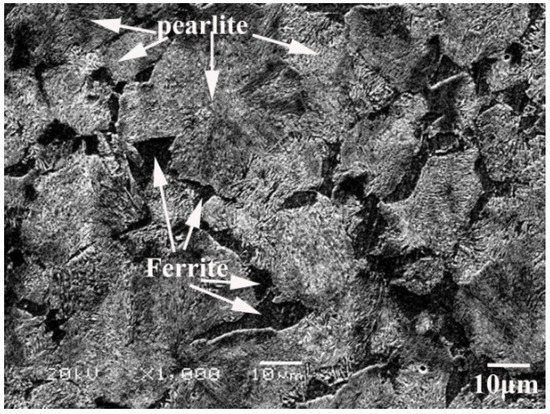 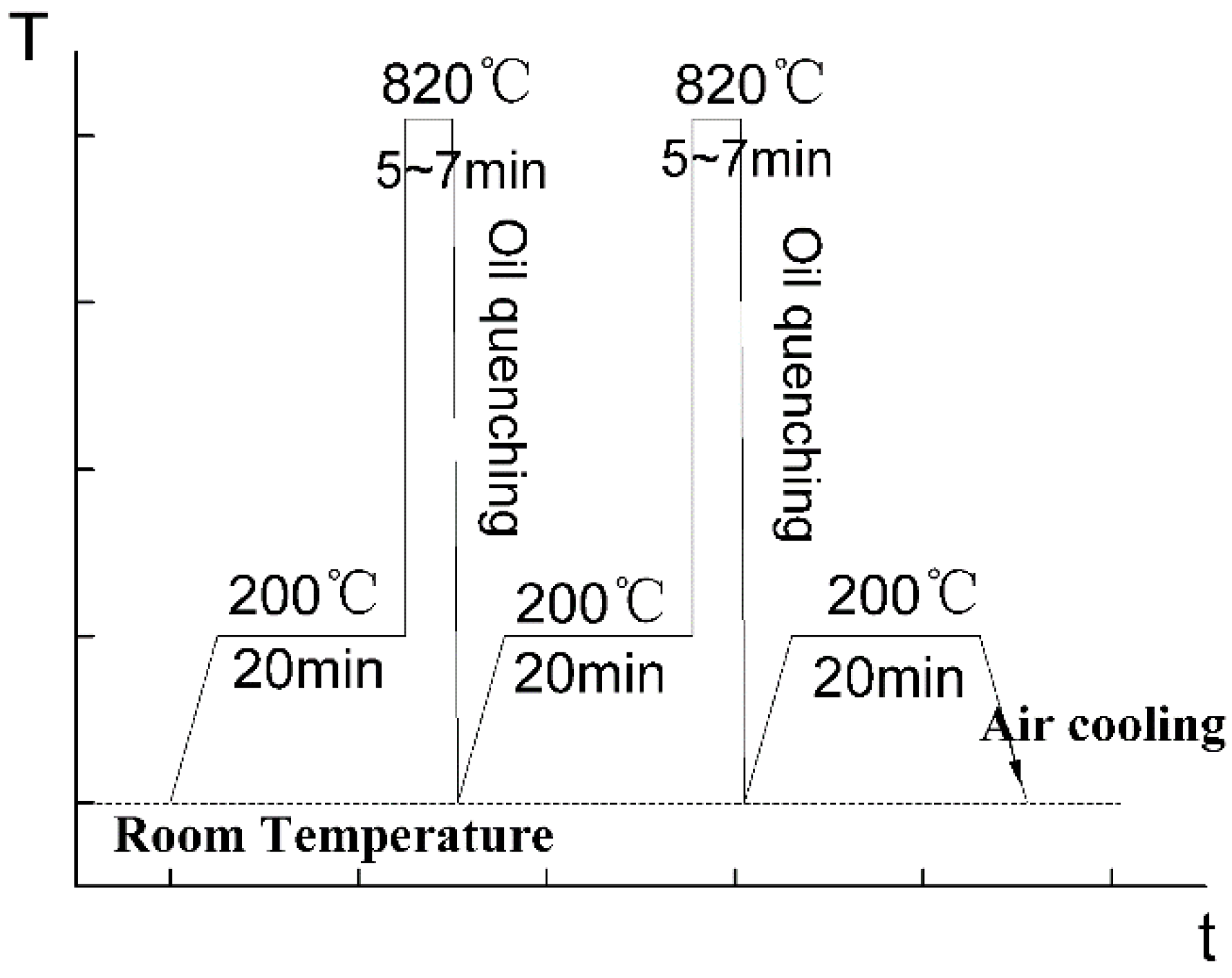 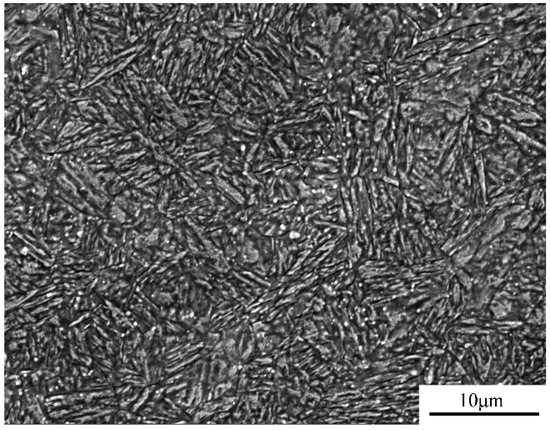 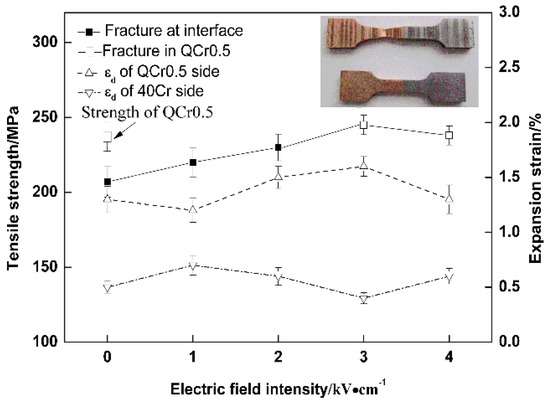 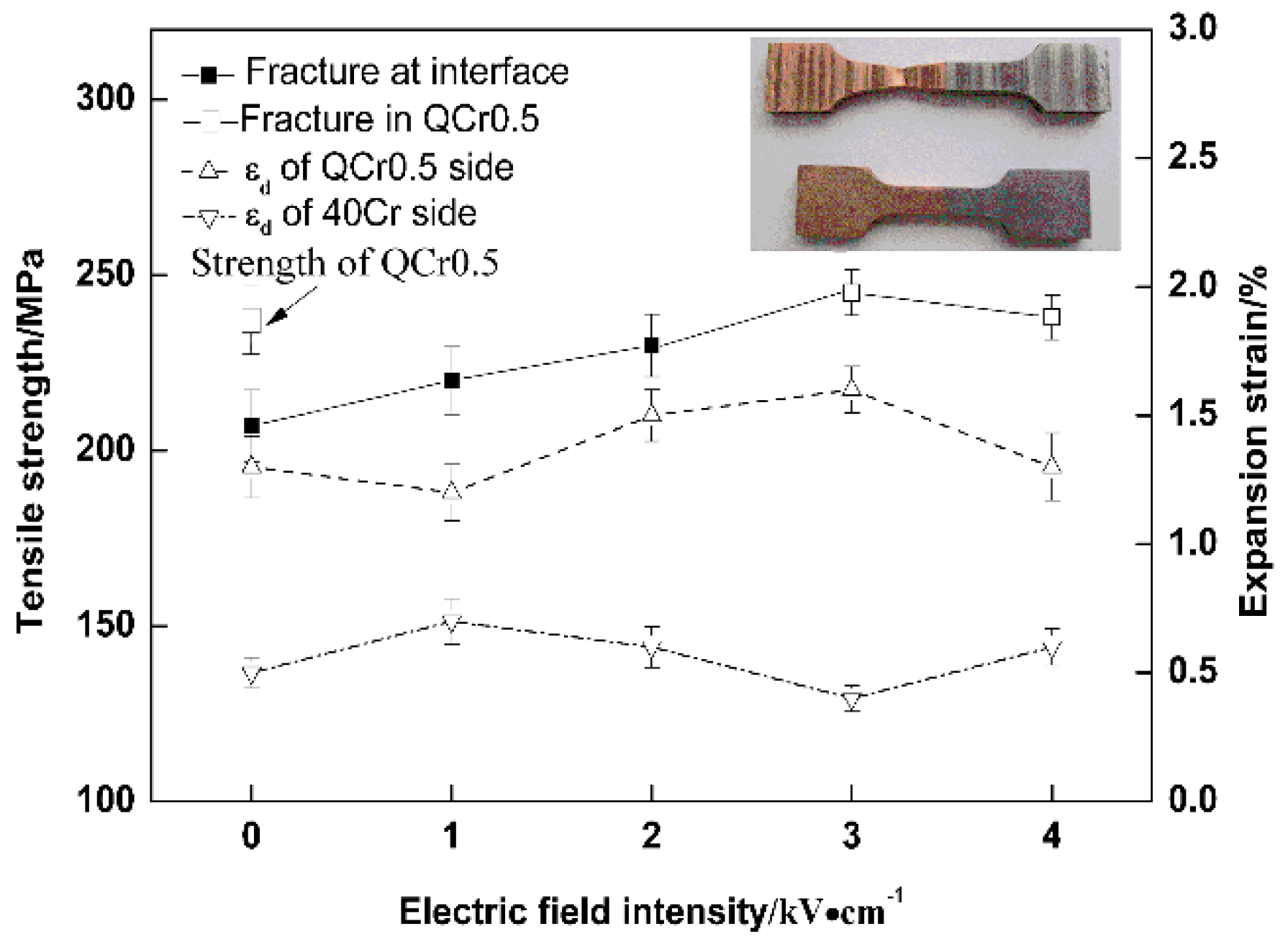 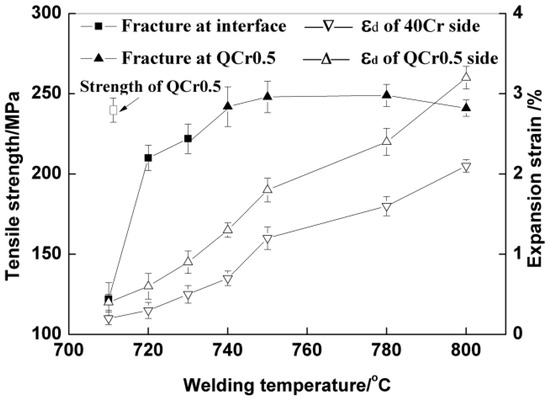 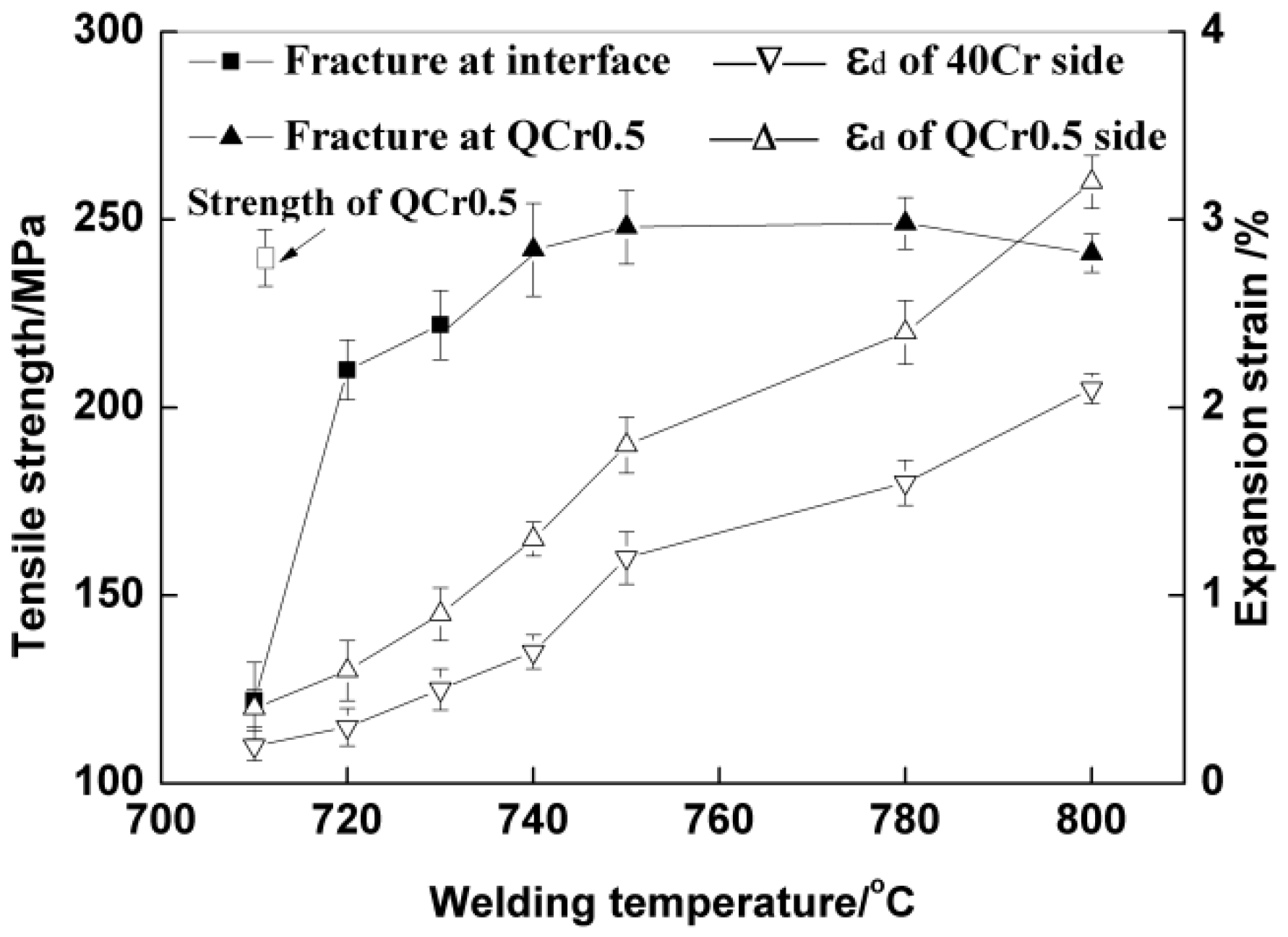 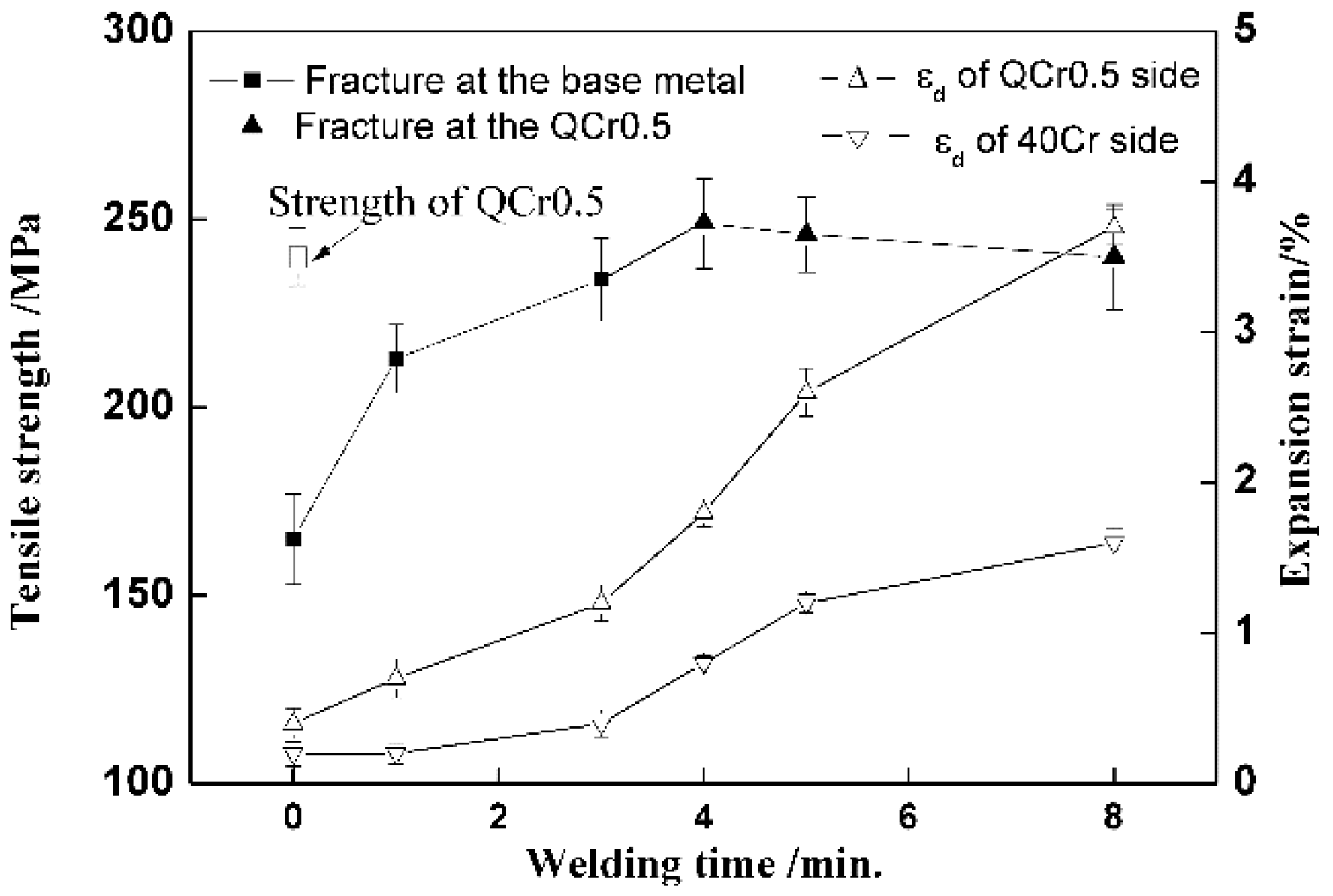