Laurence A. Belfiore 1,2 and

Poly(ethylene terephthalate) (PET) is an important engineering semicrystalline polymer due to its superior thermal and physical properties, excellent chemical resistance, and low permeability, which is widely used in fibers, bottles, and packages, etc. [1,2,3,4,5]. Its low crystallization rate at normal mold temperatures and inherent brittleness characteristics limits the wide application of PET [6,7,8,9]. A variety of inorganic substances are commonly added at small concentrations to produce high crystallinity and rapid crystallization rate [10,11,12,13]. Blending with inorganic nanoparticles is a simple and low-cost method to introduce nucleating agents into PET to increase the mechanical and other properties of polymers [14,15]. Nano-SiO2 is widely used as a kind of common additive material in industrial production because of its nontoxicity, environment friendliness, amorphism, small particle size, large specific surface area and large surface activity [16]. PET/Nano-SiO2 had been prepared by Antoniadis and Cai, and its crystallization behavior showed that nano-SiO2 can act as a nucleating agent [17,18]. However, the nano-SiO2 nucleating agent cannot uniformly disperse in the matrix of PET, which can influence the crystallization of PET because the nano-SiO2 is of high surface energy and poor compatibility with most materials [19]. Therefore, it needs to be modified. The surface modification of silica mainly involves the chemical reaction and graft polymerization of hydroxyl groups on the surface of silica. The organic molecules which grafted to the silica are generally linear in structure and the organic molecules involved in this work belongs to this class. Such measures can effectively improve the compatibility of the nucleating agents with the polymers and improve the dispersion stability [20,21]. In this research, to enhance the crystallization behavior of PET, a series of different oligomers (diethylene glycol; triethylene glycol; and tetraethylene glycol) were grafted to the surface of nano-SiO2 and then linked to the low molecular weight poly(ethylene terephthalate) (LMPET). Finally, SiO2-diethylene glycol-LMPET (PET-3), SiO2-triethylene glycol-LMPET (PET-4) and SiO2-tetraethylene glycol-LMPET (PET-5) were obtained. We introduced the PET-3, PET-4 and PET-5 into PET to improve the dispersion of the nucleating agents in PET and the crystallization properties of PET. LMPET is used to make the nucleating agents more compatible with the PET matrix. As flexible segment, the ethoxy segment is beneficial to the motion of molecular chains during crystallization and thus improves the crystallization properties. Furthermore, the effects of the nucleating agents on the non-isothermal kinetics of the composites were studied by the Jeziorny method.

Under the protection of nitrogen gas, 2.5 g of nano-SiO2 was dispersed into 25 mL of benzene solvent and then 25 mL of thionyl chloride was added to the flask to react for 4 h at 65 °C. Next, the mixture was centrifuged at a speed of 8000 r·min−1 for 15 min and washed by benzene to remove the non-reactive thionylchloride. Finally, the product of silicon chloride was dried under vacuum at 80 °C for 48 h.

1H-NMR spectra of the nucleating agents were recorded on a Bruker AVANCE-400 NMR nuclear magnetic resonance instrument (Shimadzu, Kyoto, Japan) which used chloroform as the solvent and tetramethylsilane (TMS) as the internal reference at room temperature. DSC studies were carried out using DSC 821e, (Mettler-Toledo, Zurich, Switzerland) under nitrogen atmosphere and the sample mass was kept at 8–10 mg. Each sample was heated to 300 °C and keep insulated for 5 min to eliminate the thermal history. Then the samples were heated and cooled at constant rates of 5/10/15/20 °C·min−1, respectively. Field emission scanning electron microscopy was carried on FESEM, JSM-7500F microscope (JEOL, Akishima-shi, Japan). Thermogravimetric analysis (TGA) was performed on a Perkin-ElmerDiamond TGA calorimeter (Perkin-Elmer, Waltham, MA, USA) under a nitrogen purge stream at a flow rate of 20 mL·min−1. Vacuum dried samples were subjected to be heated from 25 °C to 700 °C at the rate of 10 °C·min−1. X-ray diffraction analysis was performed at room temperature by using an XRD D-8, (Brook, Karlsruhe, Germany). The experiments were operated from 2θ = 0° to 80° at a scanning rate of 2°·min−1. 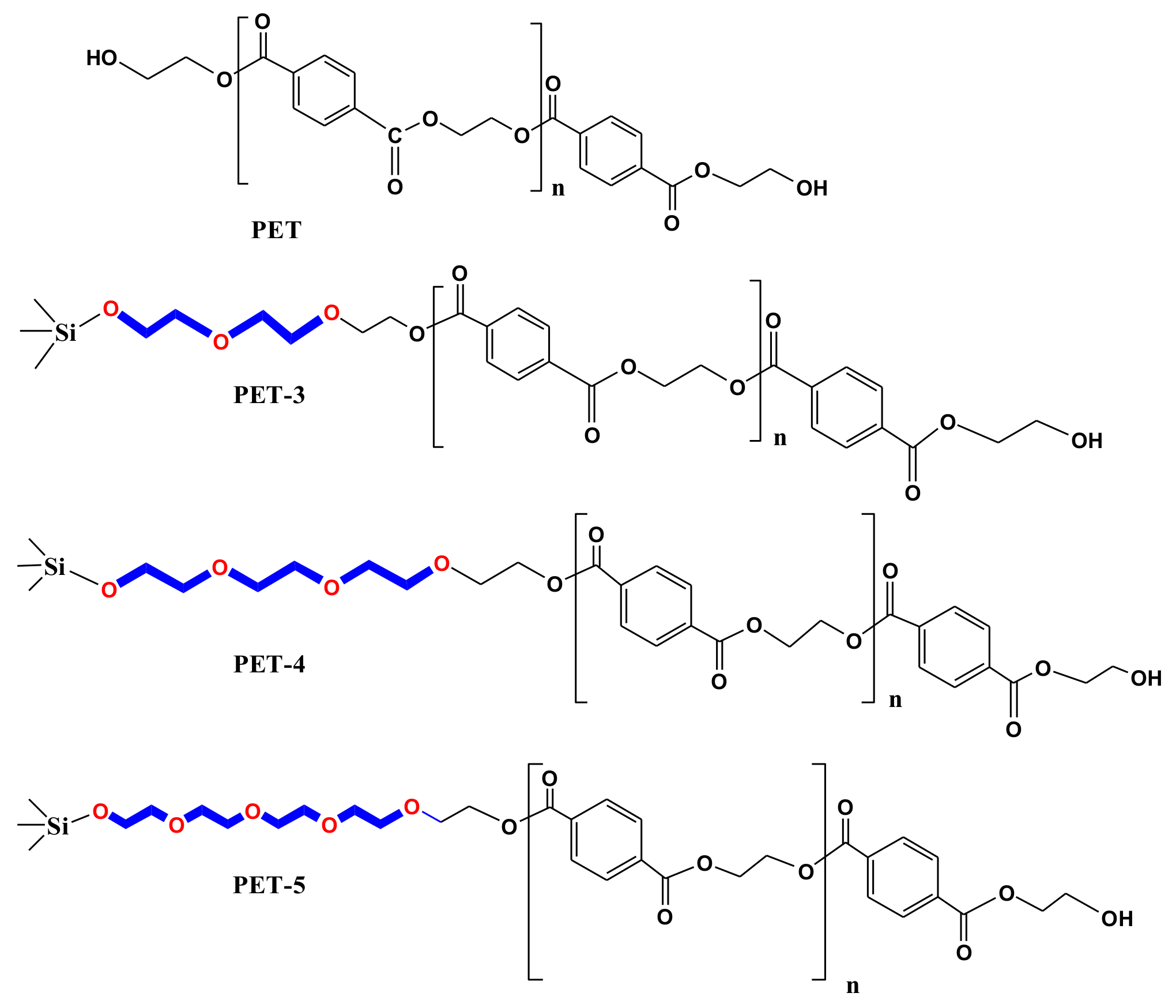 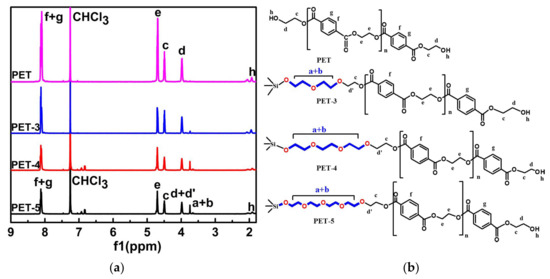 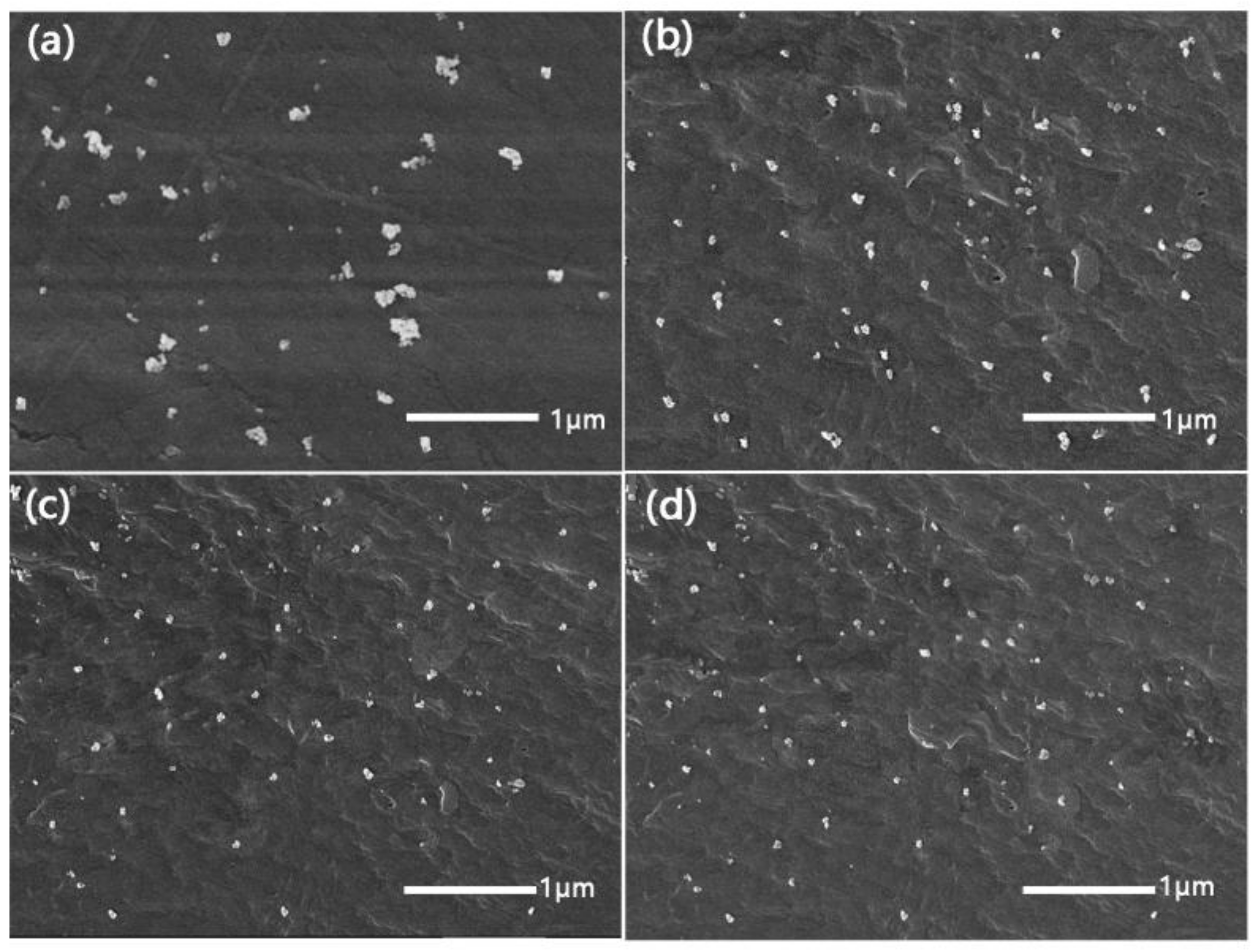 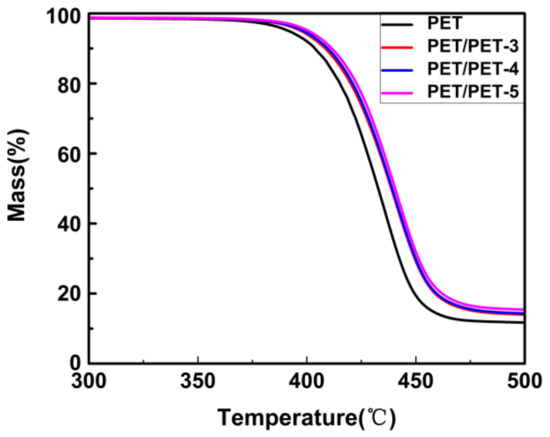 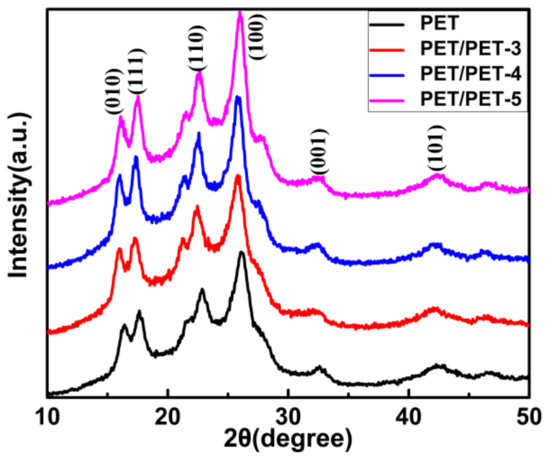 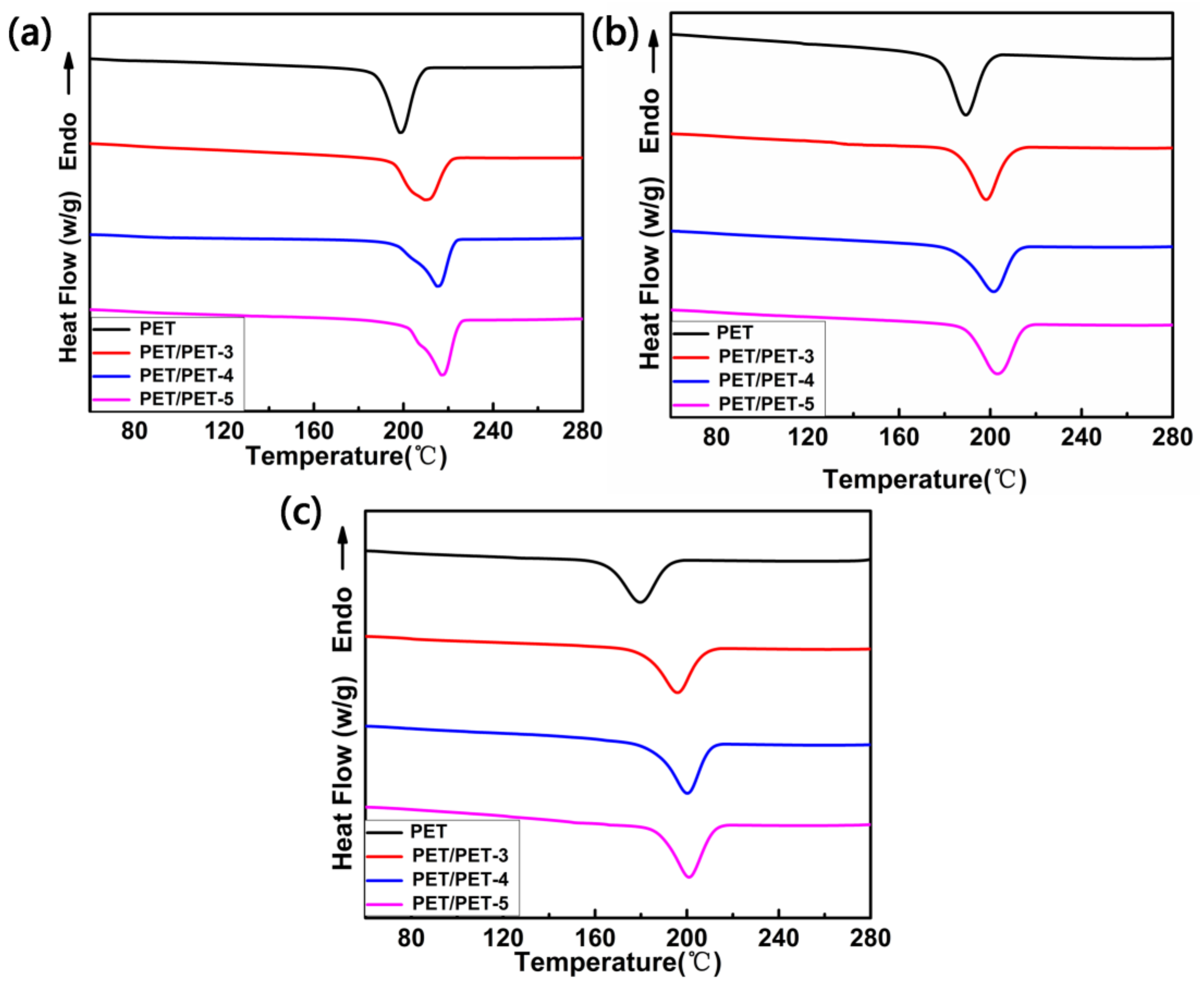 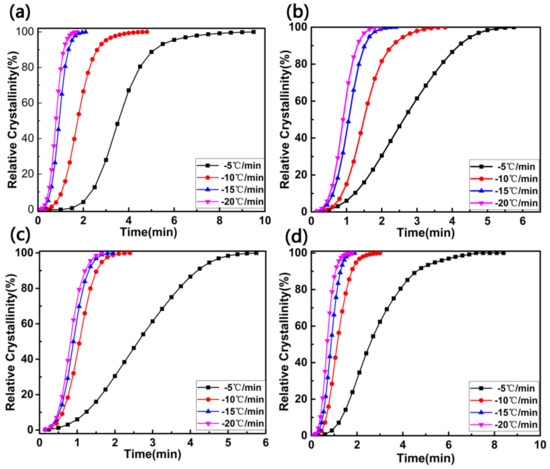