Nickel superalloys play a pivotal role in enabling power-generation devices on land, sea, and in the air. They derive their strength from coherent cuboidal precipitates of the ordered γ’ phase that is different from the γ matrix in composition, structure and properties. In order to reveal the correlation between elemental distribution, dislocation glide and the plastic deformation of micro- and nano-sized volumes of a nickel superalloy, a combined in situ nanoindentation compression study was carried out with a scanning electron microscope (SEM) on micro- and nano-pillars fabricated by focused ion beam (FIB) milling of Ni-base superalloy CMSX4. The observed mechanical response (hardening followed by softening) was correlated with the progression of crystal slip that was revealed using FIB nano-tomography and energy-dispersive spectroscopy (EDS) elemental mapping. A hypothesis was put forward that the dependence of material strength on the size of the sample (micropillar diameter) is correlated with the characteristic dimension of the structural units (γ’ precipitates). By proposing two new dislocation-based models, the results were found to be described well by a new parameter-free Hall–Petch equation. View Full-Text
Keywords: micropillar; nanoindentation; dislocation; superalloys micropillar; nanoindentation; dislocation; superalloys
►▼ Show Figures 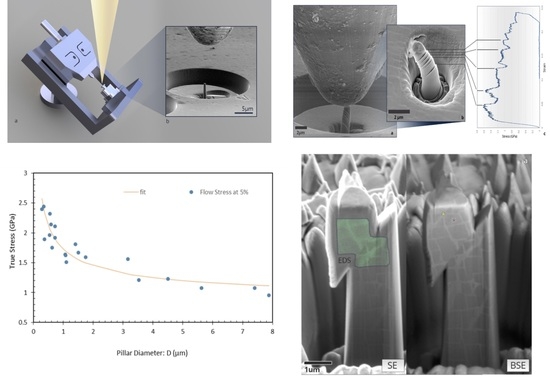