Investigating the Mechanism behind ‘Ant Nest’ Corrosion on Copper Tube

3D printing technologies have been used gradually for the fabrication of sand molds and cores for castings, even though these molds and cores are dense structures. In this paper, a generation method for lattice-reinforced thickness-varying shell molds is proposed and presented. The first step is the discretization of the STL (Stereo Lithography) model of a casting into finite difference meshes. After this, a shell is formed by surrounding the casting with varying thickness, which is roughly proportional to the surface temperature distribution of the casting that is acquired by virtually cooling it in the environment. A regular lattice is subsequently constructed to support the shell. The outside surface of the shell and lattice in the cubic mesh format is then converted to STL format to serve as the external surface of the new shell mold. The internal surface of the new mold is the casting’s surface with the normals of all of the triangles in STL format reversed. Experimental verification was performed on an Al alloy wheel hub casting. Its lattice-reinforced thickness-varying shell mold was generated by the proposed method and fabricated by the binder jetting 3D printing. The poured wheel hub casting was sound and of good surface smoothness. The cooling rate of the wheel hub casting was greatly increased due to the shell mold structure. This lattice-reinforced thickness-varying shell mold generation method is of great significance for mold design for castings to achieve cooling control. View Full-Text
Keywords: 3D printing; computer-aided design; casting; heat transfer; solidification 3D printing; computer-aided design; casting; heat transfer; solidification
►▼ Show Figures 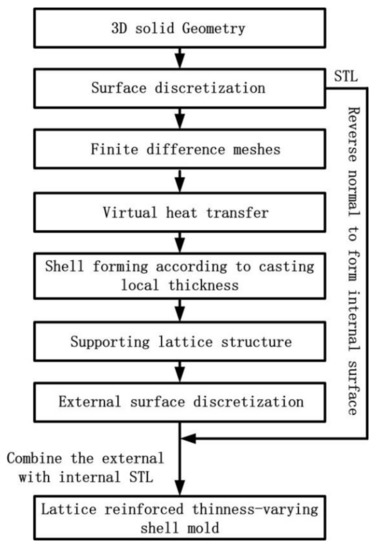