Prefabricated and modular steel structures are gaining more and more popularity in China recently. By prefabricating modular sections or components that are assembled to complete construction, project time and cost can be significantly reduced [1,2,3].
A 30-storey hotel building was completed in just 15 days using prefabricated and modular construction technology in China [4]. The hotel was assembled using modular steel columns, floor assemblies and light-frame walls. It was reported that this high-efficient construction mode takes only 7% of the total construction hours and 20% of the energy consumption when compared with the conventional construction mode and it saves 10~30% of the construction costs [5].
The Chinese code requires that columns in high-rise buildings have a fire resistance rating of either 2.5 h or 3.0 h, depending on the type of the building [6]. To meet the requirements, steel columns in the prefabricated and modular construction must be protected [7,8,9,10,11,12,13]. However, the fire protection must be optimized to fit the process of prefabrication in factory and modular assembly on-site.
Generally, there are various methods of protection to reduce the rate of heat transfer to structural steel and the most popular methods include the use of spray-applied materials, concrete encasement and board products and so forth [14,15,16,17,18,19,20]. In order to achieve factory-made efficiency and optimize the on-site installation process, spray-applied materials and concrete encasement on structural steel are not favorable methods of protection for prefabricated and modular technology.
Using board products as membrane protection, fire rated gypsum board is the most commonly used material to protect structural steel. However, to achieve a fire resistance of 2.5 h or 3.0 h, the thickness and number of layers of gypsum boards must be considerably increased and this does not favor the factory process at all. Therefore, a board product, namely fiber reinforced calcium silicate (FRCS) board, is considered as an option for the fire protection of steel columns in prefabricated and modular construction. The FRCS is manufactured from siliceous and calcareous materials reinforced with fibers and autoclaved to produce a stable crystalline structure. The stable crystalline structure and autoclaving makes the board very strong, durable and stable at high temperatures.
The fire performance of the tubular steel column with protections has attracted more and more attention in recent years. Mariappan [16] reviewed some recent work related to the development of an intumescent fire protective coating, which was suitable for the protection of non-flammable substrates, such as structural steel, against fire. Alam et al. [21] investigated the later load resistance of non-insulated steel columns under fire exposure using finite element analysis. Torić et al. [8] presented a newly developed numerical model for the behavior of steel structures exposed to fire, capable of taking into account the effect of steel creep at high temperatures by using an implicit creep model, as well as the experimental verification of the model. Yang and Yu [10] tested a series of fire-resistant steel columns with three different slenderness ratios under a sustained load under a uniform temperature for up to six hours in order to evaluate the creep upon three selected factors—temperature, applied load and column slenderness. Choe et al. [12] presented the behavior of axially loaded steel columns subjected to thermal gradients through their cross sections. Chen et al. [15] conducted twenty tests to investigate the efficiency of the intumescent coating designed to protect steel plate at an elevated temperature, by means of electrical furnace. Agarwal et al. [13] evaluated the behavior and design of steel columns subjected to thermal gradients due to fire loading numerically and experimentally. Liu et al. [22] report a full-scale fire testing of a concrete filled thin-walled steel tubular (CFST) column-wall structure.
This research was intended to study the fire resistance of steel tubular columns used in prefabricated and modular construction. Three tubular columns with different membrane protections were tested in a full-scale column furnace to study the fire resistance of columns. This paper concludes appropriate fire protection methods for the steel tubular columns to meet the code requirements. The test results provide necessary knowledge for the fire resistance design of steel columns used in prefabricated modular construction.

Three specimens were prepared for the fire resistance tests. The specimens are tubular columns, representing typical columns used in prefabricated and modular construction. The columns have hollow structural sections (HSS) in a square shape of 200 × 200 mm, with different steel thicknesses of 10, 20 and 30 mm. A specimen has a net section height of 2830 mm, connecting to column seats at each end with 16 bolts. The total height of each specimen is 3750 mm. The column details are shown in Table 1 and Figure 1.
The columns were made of Q345B steel, of which the steel yield strength is 345 MPa. The column design strengths are given in Table 1, calculated based on the Chinese steel structure standard [23].
The three specimens were protected using different materials, as shown in Table 1. For HSS-C1, the protection materials were rock wool fiber and one layer of FRCS board; for HSS-C2, rock wool fiber and two layers of FRCS boards were used; for HSS-C3, the steel column was wrapped up with 25 mm thick Fiberfrax and then protected with rock wool fiber and two layers of FRCS boards. To install the protections, C-shape light gauge steel studs (50 × 50 × 0.7 mm) were used to attach FRCS boards. Rock wool fibers were filled up in cavities between steel studs. The FRCS boards had an average density of 950 kg/m2 and the thermal conductivity of 0.15 W/(m·K) at 20 °C. The rupture strength of FRCS boards was 6.0 MPa. The Fiberfrax blanket products are manufactured from alumina-silica materials and exhibit thermal stability at high temperatures with low thermal conductivity. Rock wool is made from molten volcanic rock (typically basalt or dolomite), spun into a fiber-like structure, which provides a high-quality of insulation.
Figure 2 shows fabrication of the column protection. The column protection details are shown in Figure 3 in a cross-section view.
For each column specimen, twelve thermocouples were installed on two planes to measure specimen temperatures at different locations. Six of them were located in a plane at the middle height of the column (marked as M) and the other six were located in a plane at the top (marked as T), shown in Figure 1. On each plane, thermocouple A1 (B1) represents steel temperatures; thermocouple A2 (B2) represents temperatures in the middle of the insulation; A3 (B3) represents temperatures between the FRSC board and insulation. Figure 3 shows the thermocouple locations on each plane. The gaps between FRCS boards were sealed up with a mortar, which was made from mixed water-glass (sodium silicate) and refractory cement. This mortar exhibited good performance at high temperatures and stayed in place as observed during the tests.
Liner variable displacement transducers (LVDTs) were also installed to measure the axial contraction of the columns.
In order to avoid damage of columns during transportation, precautions should be made. Cushions were used to prevent any possible collision of prefabricated columns during transportation.

The column tests were conducted using a full-scale column furnace, shown in Figure 1. The furnace has interior dimensions of 3000 × 3000 × 3000 mm (Width × Height × Depth). The loading system is capable of applying a 15,000 kN compressive axial load.
The furnace temperatures can be measured and controlled by 9 K-Type thermocouples. The average time-temperature curve followed the Chinese standard curve (GB/T 9978.1 [24]). The curve is equivalent to the ISO 834-1 curve [25].
Failure of the column is deemed to occur if the axial contraction exceeds h/100 (mm), or the rate of axial contraction exceeds 3 h/1000 (mm/min), where h (mm) is the initial height of the column. 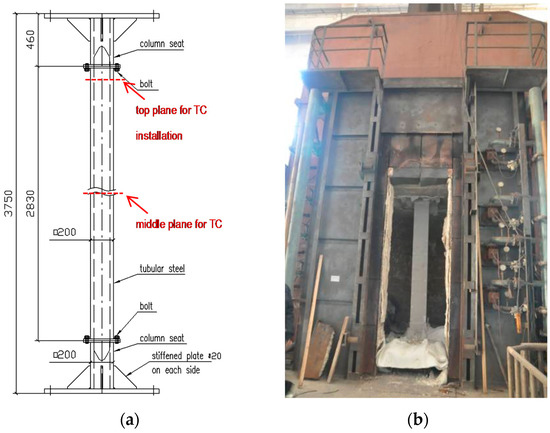 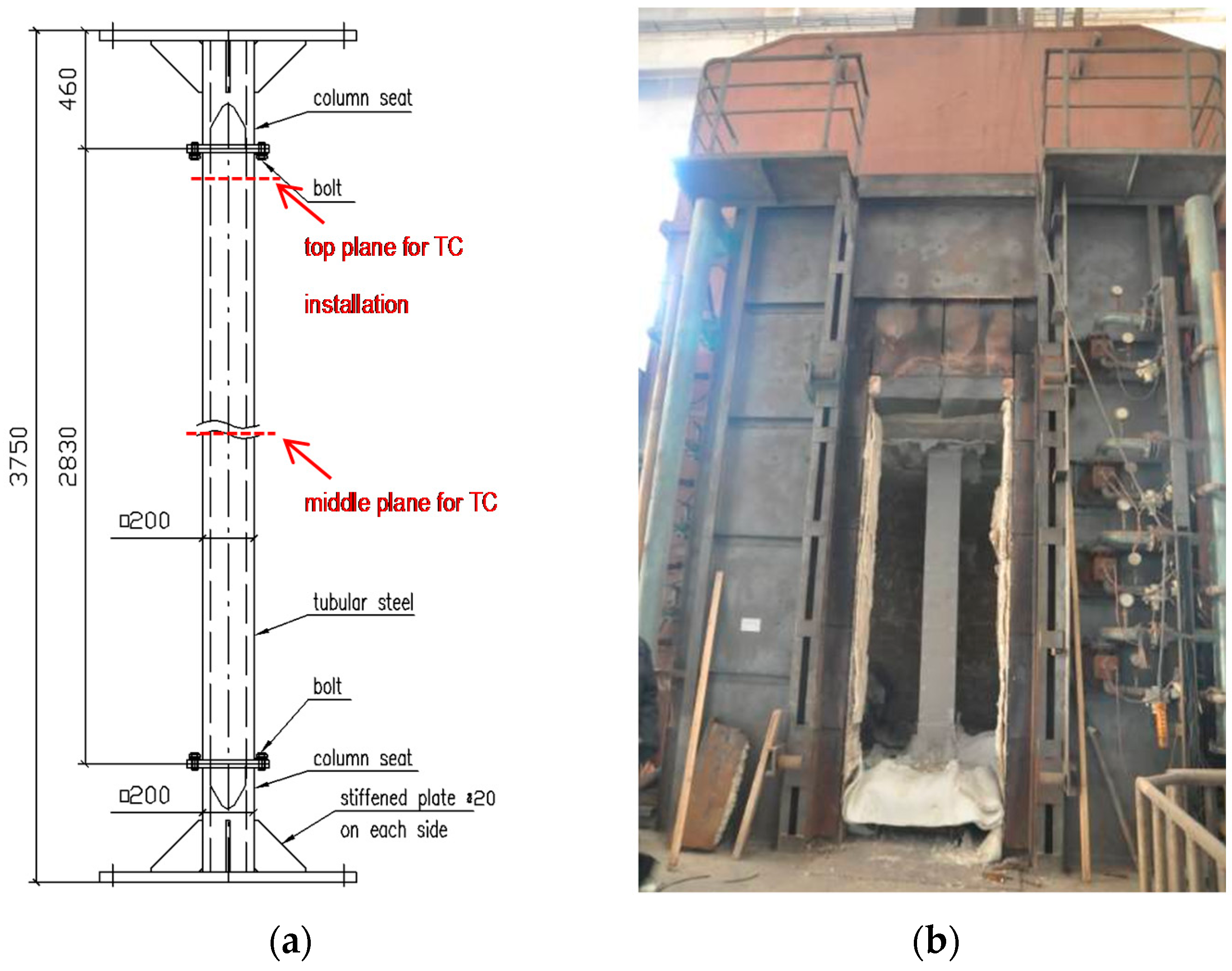 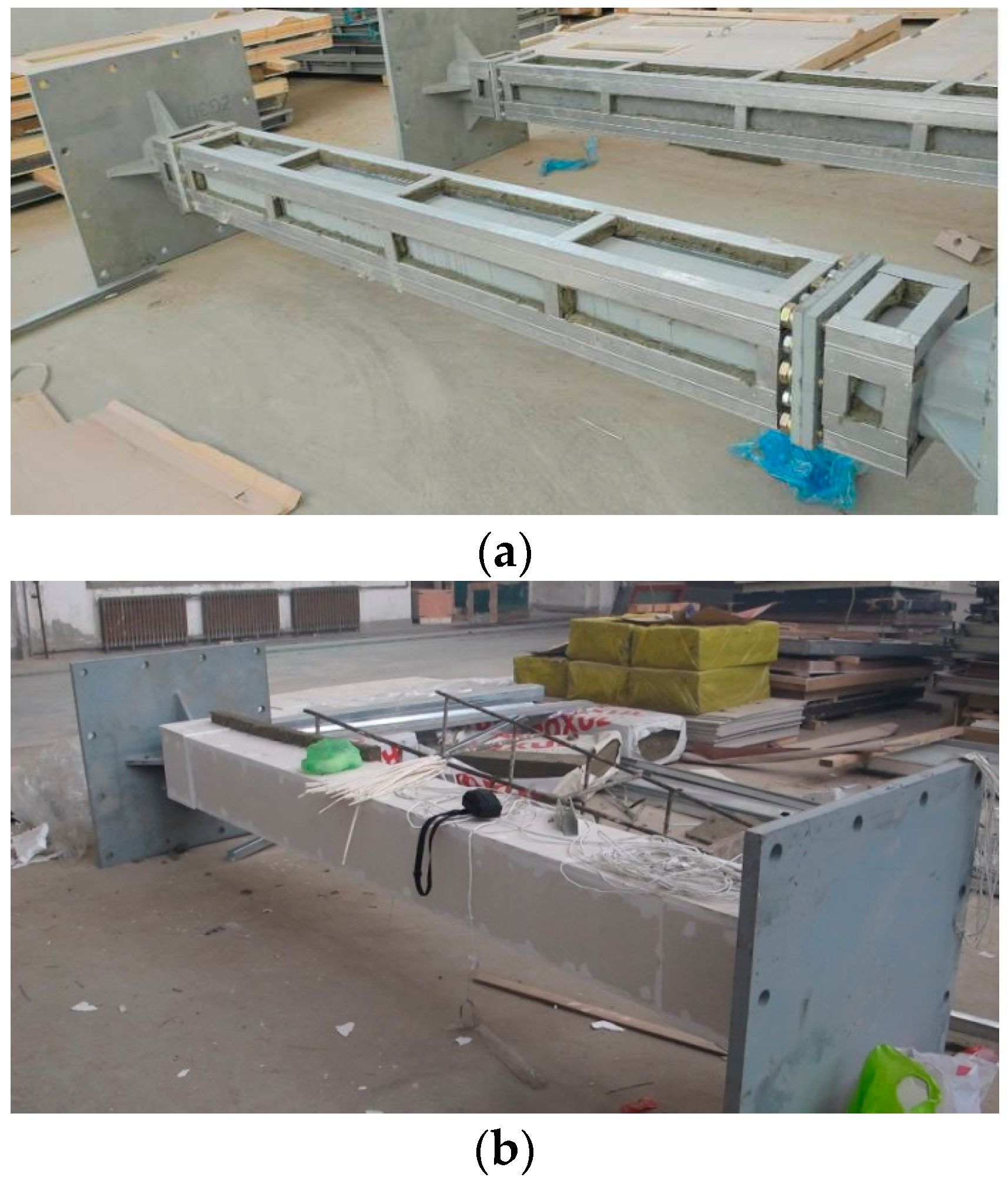 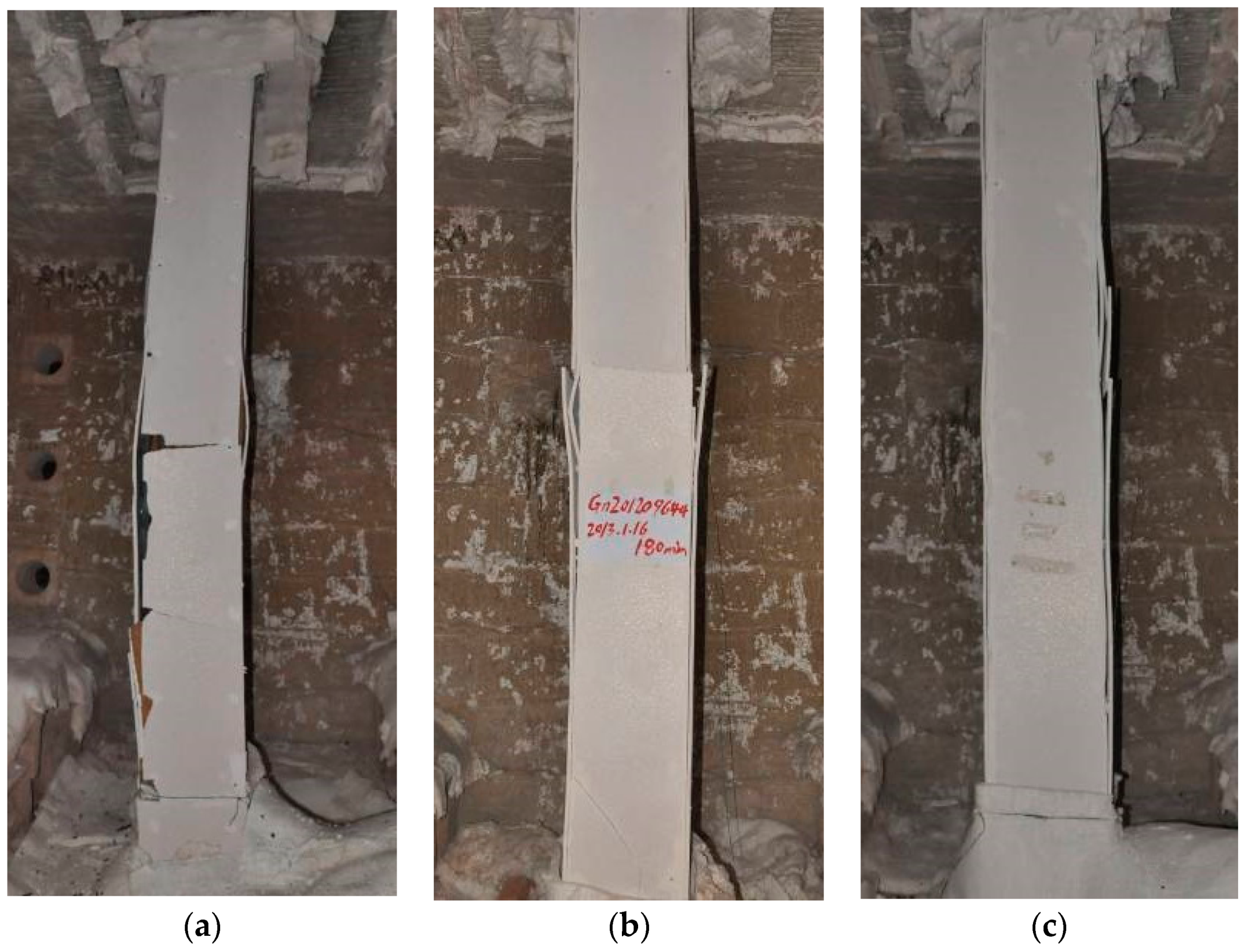 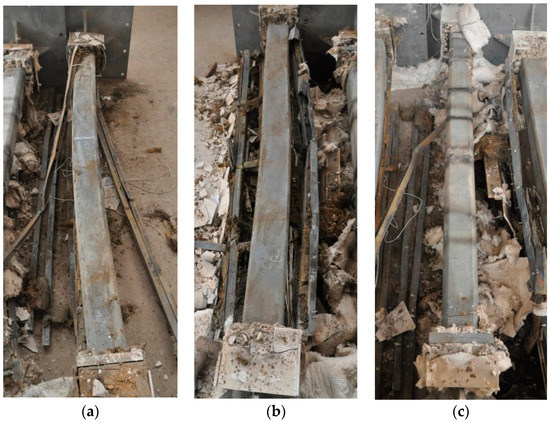 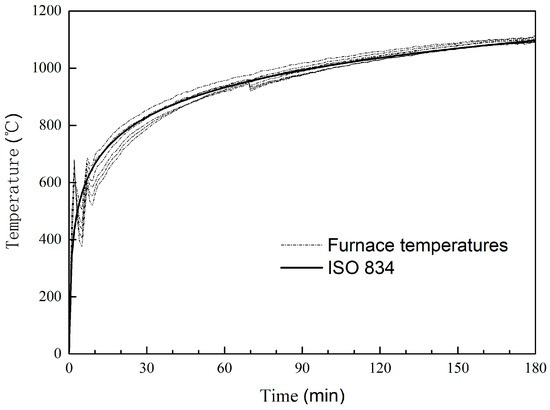 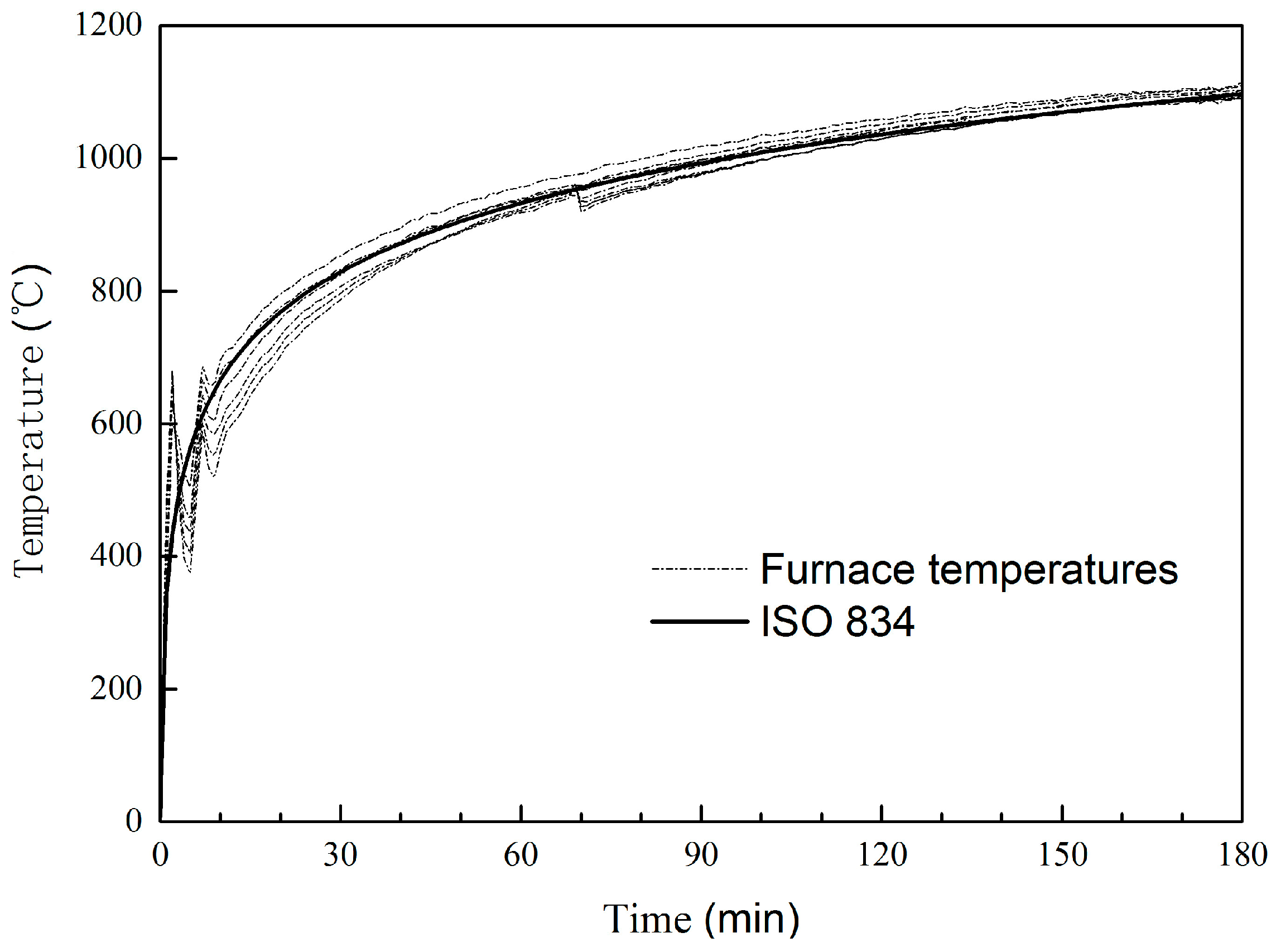 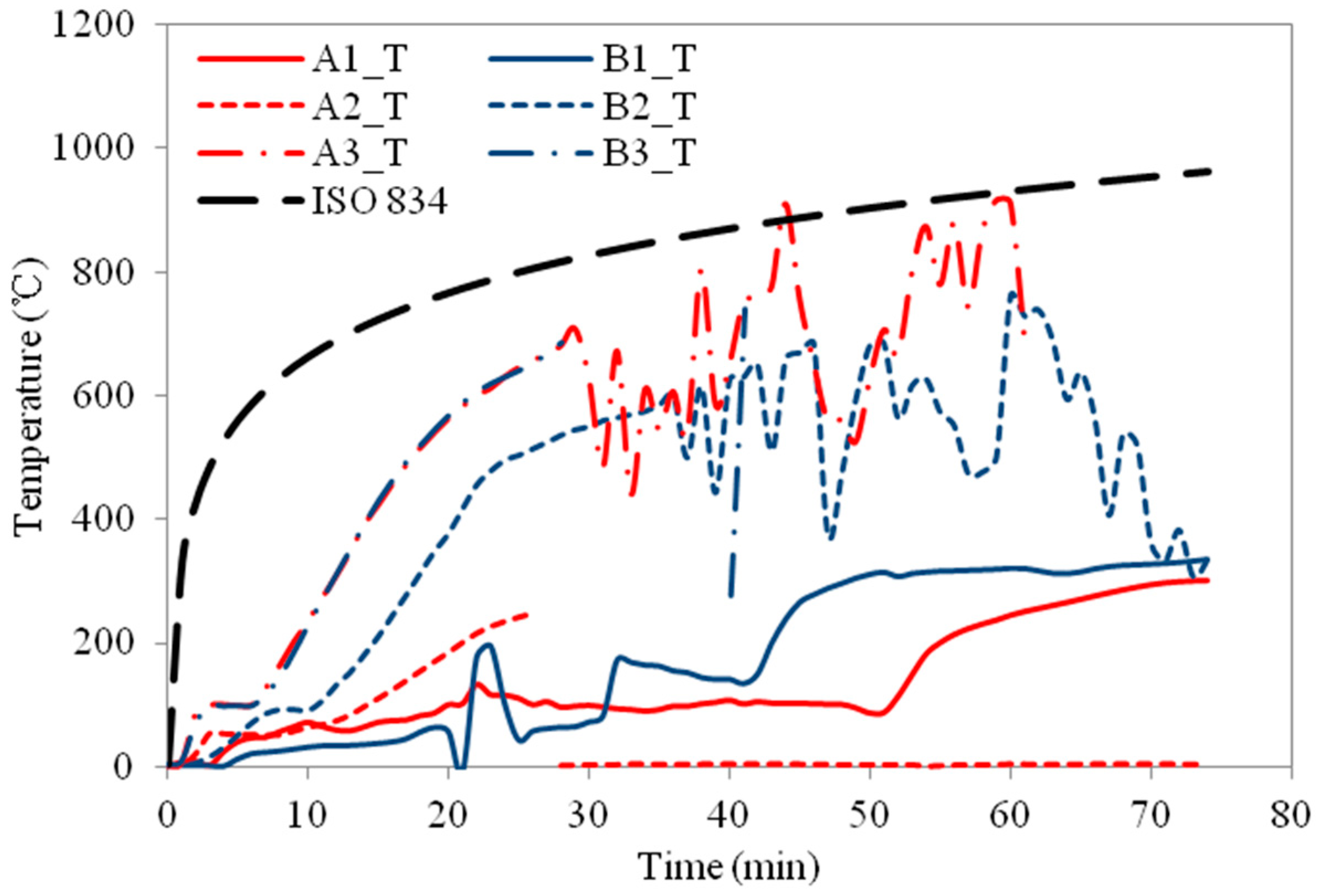 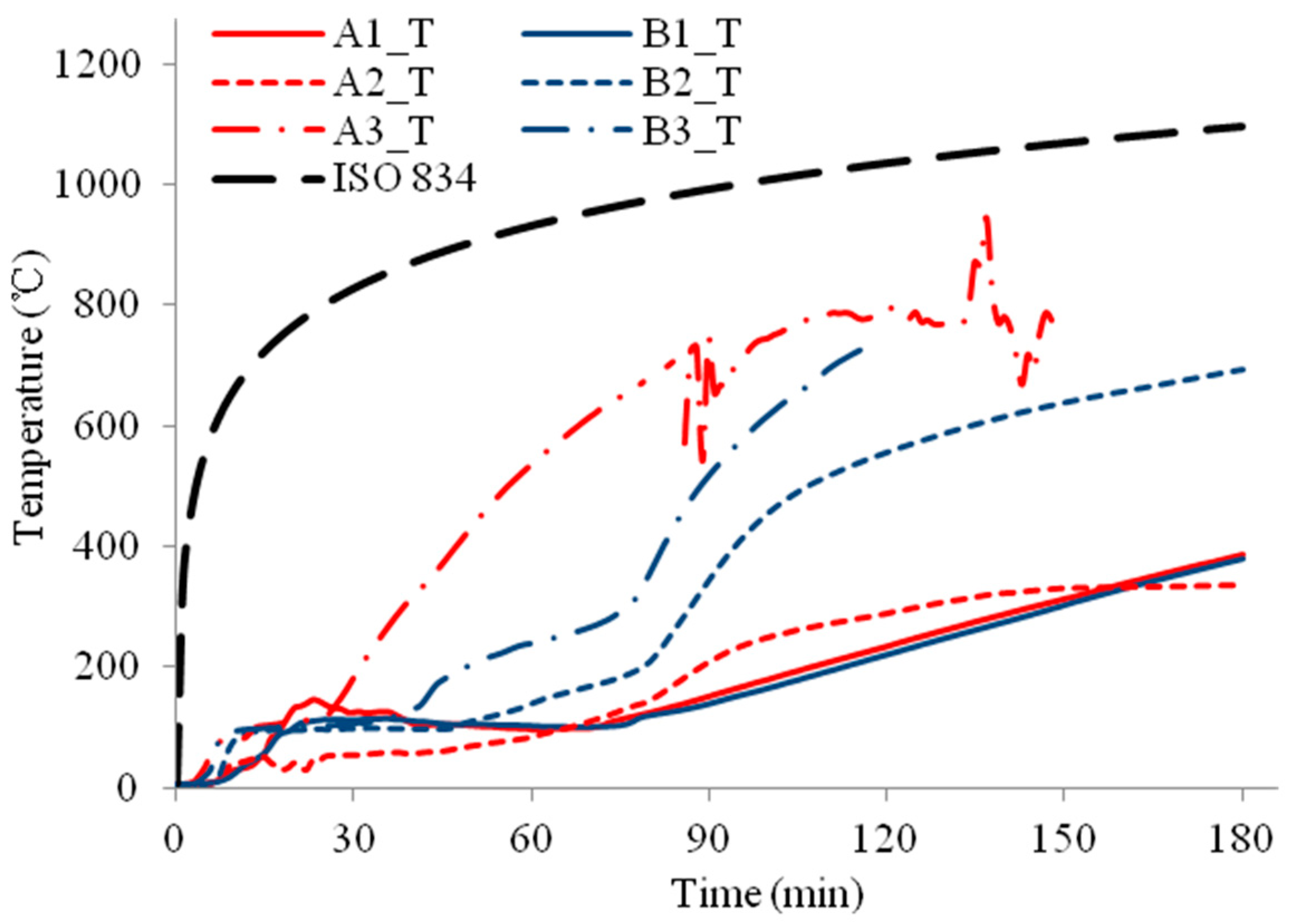 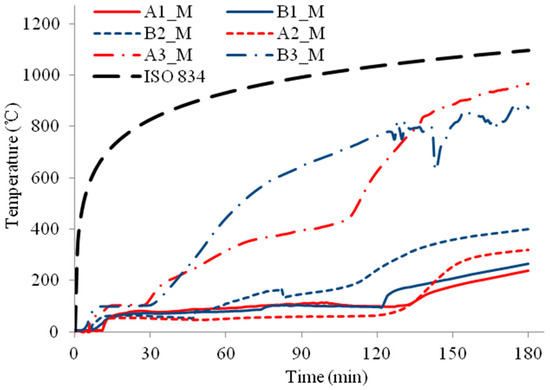 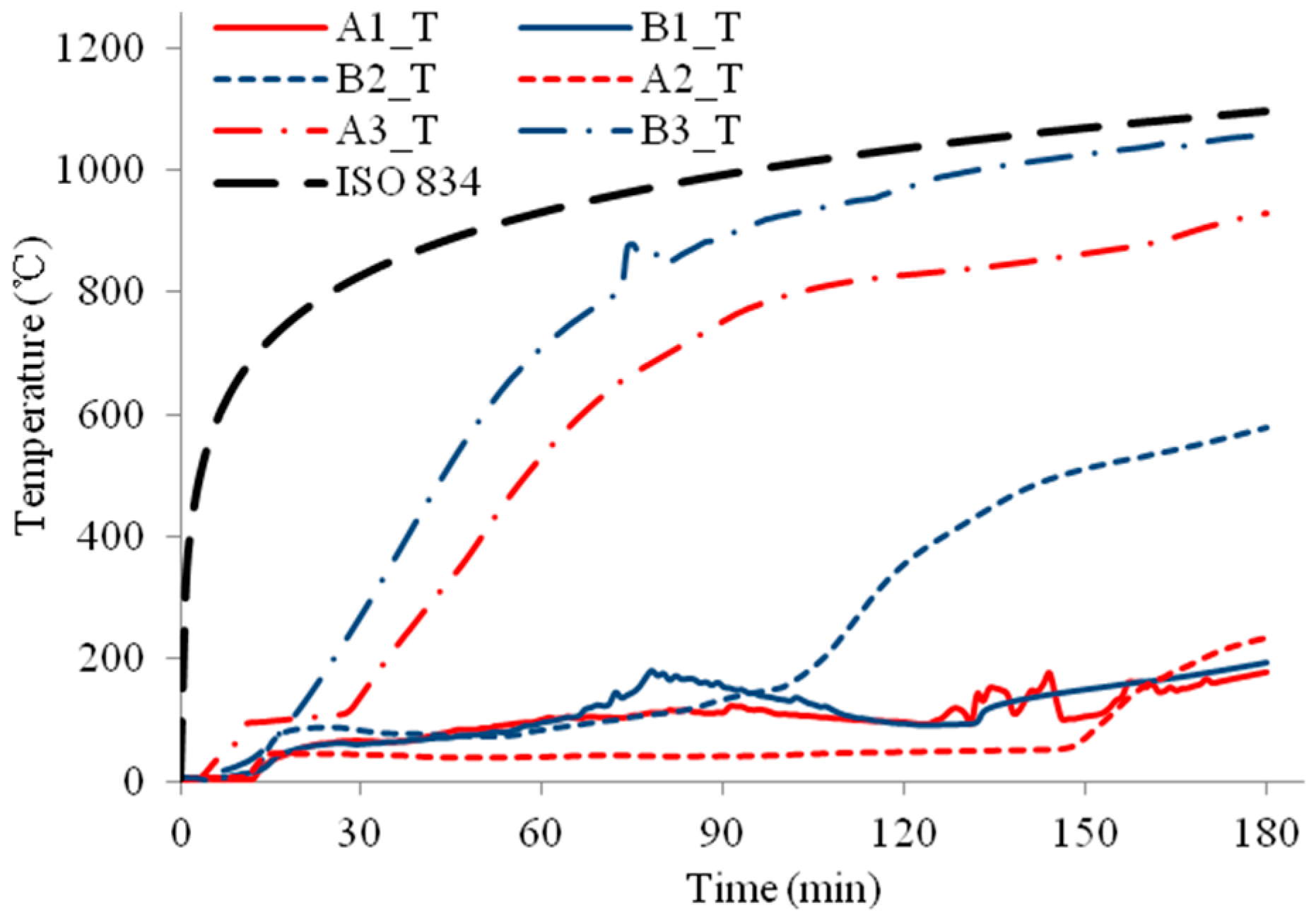 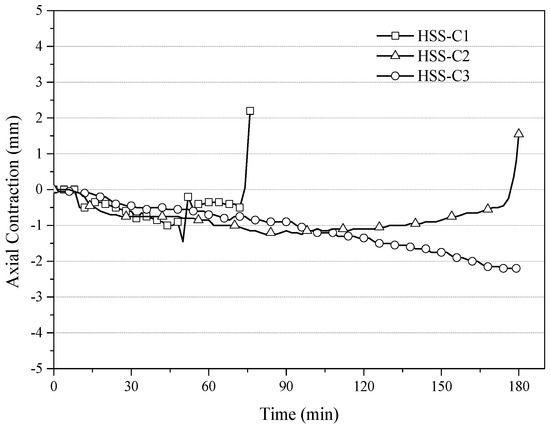 Table 2. Test results of the columns.
Table 2. Test results of the columns.
© 2018 by the authors. Licensee MDPI, Basel, Switzerland. This article is an open access article distributed under the terms and conditions of the Creative Commons Attribution (CC BY) license (http://creativecommons.org/licenses/by/4.0/).
We use cookies on our website to ensure you get the best experience. Read more about our cookies here.
Accept
We have just recently launched a new version of our website. Help us to further improve by taking part in this short 5 minute survey here. here.
Never show this again