Owing to the worldwide increase of population and raise of life expectancy, there is an increasing demand for bone grafts or synthetic materials that can potentially replace, repair or regenerate bone defects [1]. Tissue engineering (TE) is one of the fundamental solutions, implemented to challenge this problem [2]. Natural and synthetic materials, which are used to supply, replenish or enhance the living tissue functionality, are regarded as ‘biomaterials’ [3]. Within them, ‘bioceramics’, to be used for repairing and reconstructing of diseased or damaged parts of the musculo-skeletal system, - also known as ‘bioceramics’, are classified as bioinert (alumina, zirconia), bioresorbable (tricalcium phosphate) or even bioactive (hydroxyapatite, bioactive glasses, and glass-ceramics) [4]. A highly porous structure is often appreciated, e.g., for tissue ingrowth [5].
The bioactivity attributed to some glasses is due to the formation of a hydroxyl carbonated apatite layer (HCA) on their surface similar to bone mineral [5]. This HCA layer forms as a result of a rapid sequence of chemical reactions on the surface of the implant when in contact with body fluids. A well-recognized method to estimate the bone-bonding potential ability of a material, according to Kokubo et al. [6], involves its immersion into simulated body fluid (SBF), followed by the evaluation of bone-like apatite formation on the surface. In other words, the behavior in vivo may be predicted by using the SBF method in vitro, and observing the occurrence of several reactions, including the rapid release of soluble ionic species and the formation of a high surface area layer, consisting of hydrated silica and polycrystalline carbonated hydroxyapatite (HCA) [7,8], under rather strict conditions of pH. In fact, it is known that osteoblasts prefer a slightly alkaline medium (pH = 7.8) [9]; severe changes in pH, as a result of ion release, can inhibit osteoblast activity and can cause cell necrosis or apoptosis [10,11].
CEL2 bioactive glass, belonging to the SiO2–P2O5–CaO–MgO–K2O–Na2O system, was specifically tailored to control pH variations, due to ion leaching phenomena, when in contact with physiological fluids. Therefore, CEL2 glass features a lower overall alkali content (less than 20 mol %) and a slightly higher P2O5 content (3 mol %) compared to commercial bioactive glasses. CEL2 glass-ceramic was effectively found to be highly biocompatible and bioactive; in addition, unlike in many bioactive glasses, the positive effect on the mechanical properties imparted by the partial crystallization is not negatively counterbalanced by any decrease of its bioactivity [12,13].
As mentioned above, many bioceramics are in form of highly porous, open-celled bodies, also known as ‘scaffolds’. Glass and glass-ceramic scaffolds can be prepared by using different methods, such as free form fabrication techniques [14], sponge replication [15,16], starch consolidation [17] and burn-out of sacrificial polymeric particles [18]. Concerning CEL2 glass-ceramic, macroporous scaffolds for possible use as bone substitutes were prepared both by sponge replication [13] and burn-out method [19]. Both methods imply the quite delicate removal, by thermal degradation, of an organic phase, acting as a template for the cellular structure (e.g., operating with polyurethane sponge) or for the pores (e.g., operating with fugitive pore formers), followed by viscous flow sintering of glass powders, in turn accompanied by a partial crystallization. Especially in the case of sponge replication, the obtainment of high quality components relies on a careful selection of all processing conditions. Before thermal processing, the impregnation of the starting sponge, with an aqueous slurry of glass powders added with a binder (polyvinyl alcohol, PVA), must be absolutely uniform. Upon firing, the viscous flow of the glass should be enough to fill the cavities left by the burn-out of former polymeric struts otherwise low mechanical strength can be expected [20].
The present paper illustrates the extension to CEL2 glass-ceramics of a gel casting process, recently established [21,22]. The method implies the obtainment of cellular structures by direct foaming of engineered glass slurries, followed by sintering. More precisely, CEL2 glass powders were exposed to an alkaline solution, with partial dissolution. The gelation of partially dissolved products (‘inorganic gel casting’) caused a marked hardening of glass suspensions, so that they could be significantly foamed by air incorporation, under intensive mechanical stirring, with the help of a surfactant. Highly porous cellular structures could be tuned simply by adjusting the formulation of slurries; the crystallization of CEL2, upon firing, was significant in ‘freezing’ the microstructure, impeding any viscous collapse.

The chosen bioactive glass used as a reference material for the present investigation consisted of a glass belonging to the SiO2–P2O5–CaO–MgO–Na2O–K2O system. This reference glass, named CEL2, had the following molar composition: 45% SiO2, 3% P2O5, 26% CaO, 7% MgO, 15% Na2O, 4% K2O. The glass was prepared by melting reagent-grade reactants in a platinum crucible at 1400 °C for 1 h. The molten glass was poured into water to obtain a frit that was subsequently ball-milled to obtain powders, which were later manually sieved. CEL2 glass powder was analyzed through differential thermal analysis (DTA, Netzsch STA 429, Selb, Germany), with heating rate of 10 °C/min up to 1000 °C in air, to evaluate its characteristic temperatures. For foaming experiments, only powders with a diameter below 75 µm were considered.

2.2. Preparation and Microstructural Characterization of Foams

To fabricate CEL2 glass-ceramic scaffolds for bone substitutions, fine CEL2 glass powders were mixed with an aqueous solution containing 1 M NaOH (reagent grade, Sigma-Aldrich, Gillingham, UK), for a solid loading of 58 and 60 wt %. The glass slurries were kept under low speed mechanical stirring (500 rpm) for 3h, for alkaline activation and partial gelation, and then cast in several polystyrene cylindrical moulds (60 mm diameter). After the addition of 4 wt % Triton X-100 (polyoxyethylene octyl phenyl ether—C14H22O(C2H4O)n, n = 9–10, Sigma-Aldrich, Gillingham, UK), consisting of a non-ionic surfactant that does not interfere with ceramic dispersions [23], the slurries were foamed by vigorous mechanical mixing (2000 rpm), for 5 min.
The foamed slurries were later left at 40 °C for 24 h, in order to complete the gelation, before demolding. The obtained ‘green’ foams could be easily handled and placed in a muffle furnace, for the final sintering treatments, at 900–1000 °C for 1 h, followed by natural cooling. The thermal treatment comprised an intermediate step at 300 °C for 2 h to remove any absorbed water and organic residues, after a slow heating phase (2 °C/min); the subsequent heating up to the selected firing temperature was performed at 5 °C/min. Figure 1 describes the process used for manufacturing CEL2 glass-ceramic foams.

For understanding the thermal behavior, CEL2 glass powders and foamed gels were subjected to thermogravimetric analysis (TGA, STA409, Netzsch Gerätebau GmbH, Selb, Germany).
Fourier transform IR spectroscopy (FTIR, FTIR model 2000, Perkin Elmer Waltham, MA, USA) measurements were made for the dry CEL2 glass powder and for CEL2 glass foams, with a solid load of 60 wt %, in form of green foams and after heat treatment at 900 °C. FTIR analysis were conducted on solid discs (with 13 mm diameter), prepared by mixing powdered samples with KBr powder (2 mg dispersed in 200 mg of KBr). The FTIR spectra were collected in the 4000–400 cm−1 range.
The phase assemblages were performed by means of X-ray diffraction on powdered samples (XRD; Bruker D8 Advance, Bruker AXS GmbH, Karlsruhe, Germany), supported by data from PDF-2 database (ICDD-International Centre for Diffraction Data, Newtown Square, PA, USA) and Match! program package (Crystal Impact GbR, Bonn, Germany). X-ray diffraction analysis were performed using a scanning range 2θ from 10° to 70° with a scanning rate of 0.05°/step, and an analysis time of 2 s/step.
Nano-CT (SkyScan 1272, Bruker microCT, Kontich, Belgium) experiments were performed on CEL2 glass-ceramic foams with different solid loads, using a X-ray beam generated by a tungsten filament charged by a voltage of 70 kV and a current of 142 µA. Samples were analyzed over a rotation range of 180°, with a step of 0.02°, an exposure time of 3250 ms per projection and a pixel size of 5.37 µm. The so-collected shadow images have been first reconstructed using a filtered back-projection algorithm (NRecon, Bruker, Bruker microCT, Kontich, Belgium), then sample 3-D structures was obtained from the reconstructed images by means of a specific software (Bruker CTvox software, Mannheim, Germany). A volume of interest (VOI) was selected for each sample in order to analyze its structural parameters (Bruker CTan Software, Mannheim, Germany), after image binarization. In particular, for the analysis of pore interconnectivity the “shrink wrap” function has been applied in the 3D VOI. This function allows shrinking the outside boundary of the VOI through any openings whose connection size is larger than a threshold value (set in this work from 0 µm to 170 µm), identifying consequently the inaccessible regions of the scaffold comprised in the VOI. For each threshold value, the % interconnectivity has been calculated applying the following equation: where V is the total VOI volume, Vshrink-wrap is the total volume after the application of the shrink-wrap function and Vm is the scaffold volume comprised in the VOI.
Microstructural characterizations were performed by optical stereomicroscopy (AxioCam ERc 5 s Microscope Camera, Carl Zeiss Microscopy, Thornwood, NY, USA) and scanning electron microscopy (SEM, FEI Quanta 200 ESEM, FEI Company, Eindhoven, The Netherlands) equipped with energy dispersive spectroscopy (EDS).
The geometrical density (ρgeom) of CEL2 glass foams was evaluated by considering the mass to volume ratio. The apparent (ρapp) and the true (ρtrue) density values were measured by using a helium pycnometer (AccuPyc 1330, Micromeritics, Norcross, GA, USA), operating on bulk or on finely crushed samples, respectively. The three density values were used to compute the amounts of total and open porosity.
The compressive strength (σc) of CEL2 glass-ceramic foams was measured at room temperature, by means of an Instron 1121 UTM (Instron, Danvers, MA, USA) operating with a cross-head speed of 1 mm/min. Each data point represents the average value of 5 to 10 individual tests.

We may conclude that:

For this paper, Enrico Bernardo and Chiara Vitale Brovarone formulated research ideas, supervised the experiment on porous CEL2 glass-ceramic materials and planned the structure of the article. Hamada Elsayed and Acacio Rincón Romero performed the general experimentation except µ-CT measurements and its data interpretation, which were done by Giulia Molino. Hamada Elsayed and Enrico Bernardo have written and edited the article. 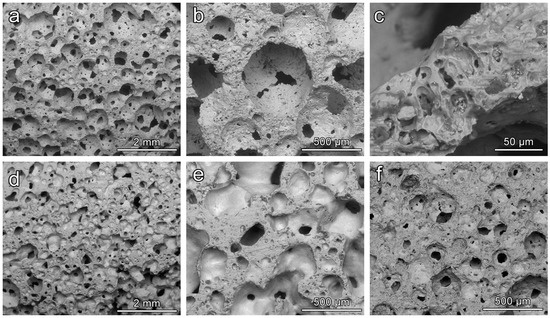 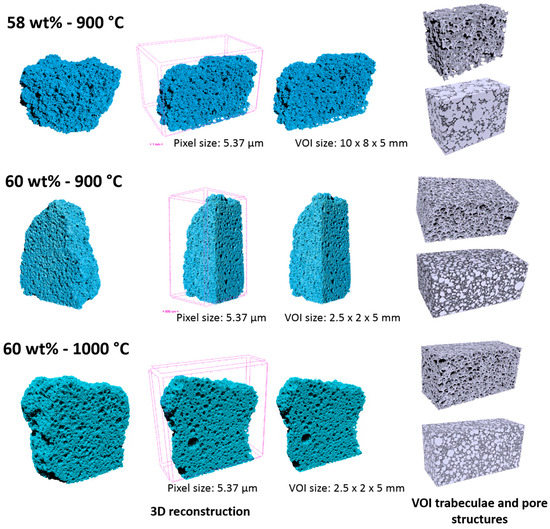 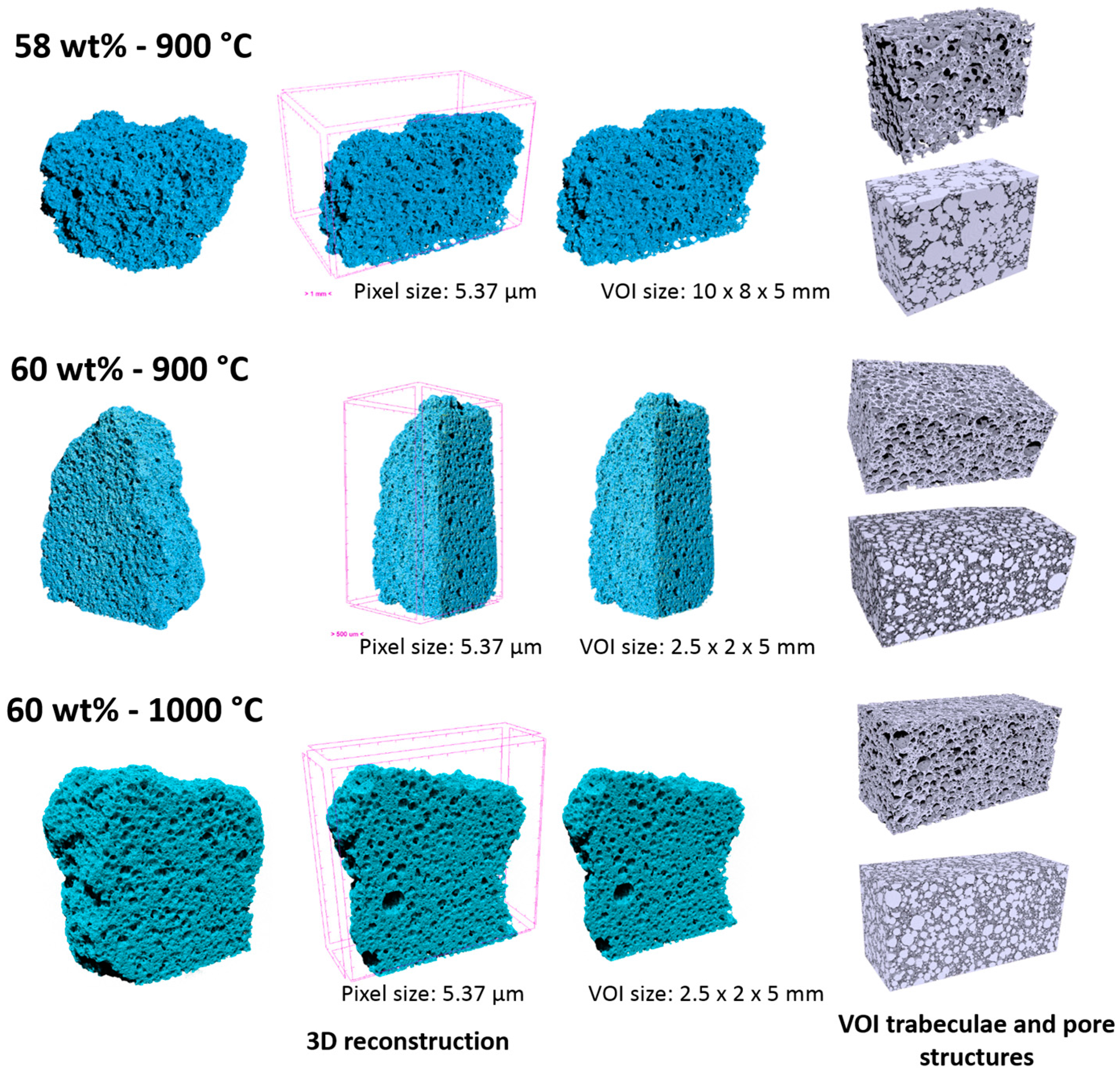 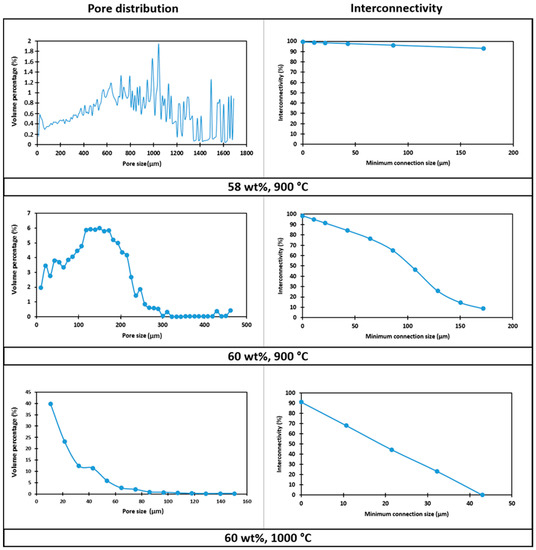