The anti-microbial activity of calcium hydroxide pastes used in endodontics is dependent on establishing high levels of hydroxyl ions in dentine. This study investigated hydroxyl ion diffusion from different commercial calcium hydroxide pastes using a novel colourimetric method. In this method, human tooth roots were stained with anthocyanin dye, which changed their colour according to the local pH conditions. Prepared root canals were filled with pastes formulated with the vehicle of water (Pulpdent™, Calasept Plus™), polyethylene glycol (PEG) (Calmix™) or a mixture of water, PEG and ibuprofen (Odontocide™). The changes in dye colour at fixed distances from the canal wall were monitored using standardised digital photography over a period of 3 weeks. A repeated measures analysis tracked changes in each root from baseline. Release of hydroxyl ions varied between the different commercial compositions containing water or PEG as solvents. The colour changes in the dentine, due to released hydroxyl ions, were greatest and more prolonged for completely non-aqueous compositions, when using PEG 400 as the vehicle. When water was present in the product, the duration of the pH changes was shorter. This was attributed to the presence of hydroxyl ions in the water (the common-ion effect) and a more vigorous buffering of hydroxyl ions by dentine proteins. View Full-Text
Keywords: calcium hydroxide; hydroxyl ions; polyethylene glycol; solvent; vehicle; intracanal medicament; pastes calcium hydroxide; hydroxyl ions; polyethylene glycol; solvent; vehicle; intracanal medicament; pastes
►▼ Show Figures 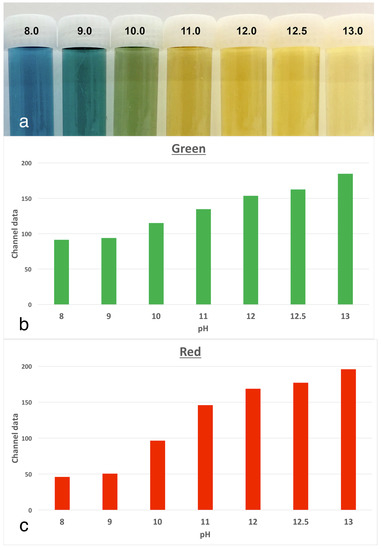