The objective of this paper was to explore the bond–slip relationship between carbon fiber-reinforced polymer (CFRP) sheets and concrete under cyclic loading through experimental and analytical approaches. Modified beam tests were performed in order to gain insight into the bond–slip relationship under static and cyclic loading. The test variables are the CFRP-to-concrete width ratio, and the bond length of the CFRP sheets. An analysis of the test results in this paper and existing test results indicated that the slope of the ascending segment of the bond–slip curve decreased with an increase in the number of load cycles, but the slip corresponding to the maximum shear stress was almost invariable as the number of load cycles increased. In addition, the rate of reduction in the slope of the ascending range of the bond–slip curve during cyclic loading decreased as the concrete strength increased, and increased as the load level or CFRP-to-concrete width ratio enhanced. However, these were not affected by variations in bond length if the residual bond length was longer than the effective bond length. A bilinear bond–slip model for CFRP sheets that are externally bonded to concrete under cyclic loading, which considered the effects of the cyclic load level, concrete strength, and CFRP-to-concrete ratio, was developed based on the existing static bond–slip model. The accuracy of this proposed model was verified by a comparison between this proposed model and test results. View Full-Text
Keywords: carbon fiber-reinforced polymer; concrete; interface; bond–slip model; cyclic loading carbon fiber-reinforced polymer; concrete; interface; bond–slip model; cyclic loading
►▼ Show Figures 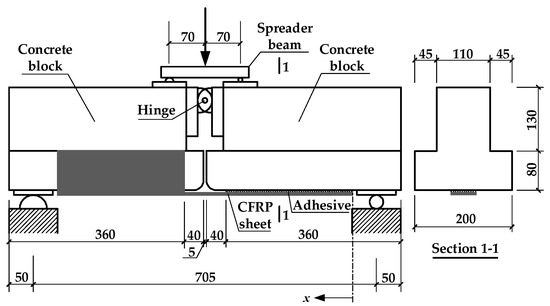