The Use of Municipal Solid Waste Incineration Ash in Various Building Materials: A Belgian Point of View

Carbon fiber-reinforced polymer (CFRP) composites have been increasingly used in spacecraft applications. Spacecraft may encounter highenergy-density X-ray radiation in outer space that can cause severe damage. To protect spacecraft from such unexpected damage, it is essential to predict the dynamic behavior of CFRP composites under X-ray radiation. In this study, we developed an in-house three-dimensional explicit finite element (FEM) code to investigate the dynamic responses of CFRP composite under X-ray radiation for the first time, by incorporating a modified PUFF equation-of-state. First, the blow-off impulse (BOI) momentum of an aluminum panel was predicted by our FEM code and compared with an existing radiation experiment. Then, the FEM code was utilized to determine the dynamic behavior of a CFRP composite under various radiation conditions. It was found that the numerical result was comparable with the experimental one. Furthermore, the CFRP composite was more effective than the aluminum panel in reducing radiation-induced pressure and BOI momentum. The numerical results also revealed that a 1 keV X-ray led to vaporization of surface materials and a high-magnitude compressive stress wave, whereas a low-magnitude stress wave was generated with no surface vaporization when a 3 keV X-ray was applied. View Full-Text
Keywords: X-ray radiation; CFRP composite; dynamic behavior; BOI momentum; FEM code X-ray radiation; CFRP composite; dynamic behavior; BOI momentum; FEM code
►▼ Show Figures 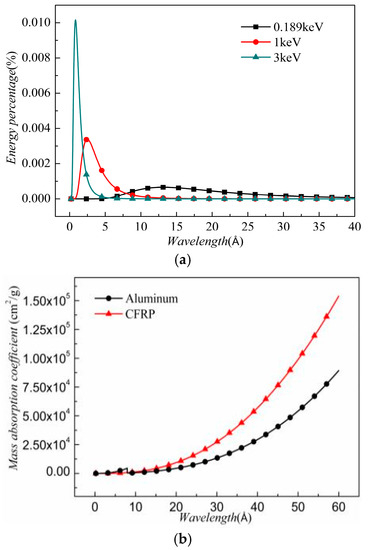