Synthesis and Characterization of “Ravine-Like” BCN Compounds with High Capacitance

Metamaterials consist of periodic subwavelength unit cell which can provide more possibility to construct the desired constitutive parameters. As new artificial medium, metamaterials have great applications in many fields, such as superlenses [1,2,3], invisibility cloaks [4,5,6], and perfect absorbers [7,8,9,10]. For the field of electrometric wave absorbing medium, the perfect metamaterial absorber was firstly proposed based on three-layered configuration of metal-dielectric-metal [7]. The strong resonance from the metallic metamaterial and the loss from the dielectric substrate worked together contributing to nearly perfect absorption at one frequency. Based on this, various MAs with one-, two- or multi-band absorption were proposed [8,9,10,11,12,13]. However, highly effective absorption is always accompanied with the narrow bandwidth, which was the fundamental obstacle limited the practical application.
To achieve broadband MAs, many attempts were carried out. First, the combination of multi-unit exciting contiguous resonances can be thought as a direct way to construct a continuous broadband absorption [14,15,16,17,18,19]. On the one hand, the multi-unit with adjacent absorption peaks can be assembled together on the same plane [14,15]. However, the inherent contradiction between the absorbing efficiency and the duty radio always hindered the further enhancement of broadband absorption. On the other hand, the varied units with the contiguous absorption peaks can also be arranged along the wave vector to achieve outstanding broadband absorption [16,17,18]. However, the expansion of absorption bandwidth was carried out at the sacrifice of ultrathin thickness and light weight characteristic. Then, loading lumped elements to MA was demonstrated to be an effective way to achieve broadband MA [19,20,21,22]. More specifically, when loading lumped resistor and capacitor to MA, several absorption peaks will not only be adjusted to more adjacent frequencies, but they also exhibit low Q factor in the spectrum. The several absorption peaks with low Q factor finally overlapped together contributing highly effective and broadband absorption. Meanwhile, with the development of fabricated technology, a series of innovated materials got a lot of attention. They were also introduced to the MA in pursuit of outstanding broadband absorption performance [23,24,25,26]. For example, resistive patch with strong ohmic loss was introduced to construct broadband MA in electromagnetic wave [27,28,29,30,31,32,33]. Compared with the aforementioned MA based on metal-dielectric-metal configuration, resistive MAs easily achieved highly effective and broadband absorption as well as other advantages, such as lightweight, low cost, and easy fabrication. However, with deep research of resistive MAs, it was also demonstrated that the further enhancement of broadband absorption, especially for lower-frequency absorption, was not easy to carry out when the total thickness of the resistive MA was given.
In this paper, aiming at the target of lower-frequency absorption enhancement in resistive MA, we attempted to load MRs to the resistive MA to reconfigure the broadband absorption performance. As a proof, the three-dimensional resistive patch array standing on the metal backplane was firstly introduced for broadband absorption. Then, the metallic bamboo joints as MRs were adhered to the resistive patches. The strong resonance inspired by the MRs at low frequency broke the original broadband absorption. Simulation showed that the proposed MA can effectively separate partial absorption peak to the lower frequency, while keeping the broadband absorption at rest frequencies unchanged. Meanwhile, after combining multi-unit, the stair-stepping broadband absorption was also achieved. Finally, three samples were fabricated for experimental demonstration. It is expected that a wide range of applications will emerge from the proposed attempt.

Using resistive patch to construct broadband MA has been widely adopted. Here, our method attempted to use resistive patch array stand on the metal backplane as three-dimensional resistive MA. As shown in Figure 1a,b, the height, the width and the sheet resistance of each resistive patch are d, a and fz, respectively. The resistive patch arranged along x-axis direction on the square backplane with the size of p. The gap between adjacent resistive patches was s. The F4B3 substrate (WANGLIN, Taizhou, Jiangsu, China) was used here as a supporter for the construction of the resistive patch array with height d, width p, and thickness t. The relative permittivity and loss tangent of the F4B3 substrate are 2.65 and 0.001, respectively. The copper plate was used here as backplane with a frequency independent conductivity σ = 5.8 × 107 S/m and the thickness tc = 0.017 mm. In the simulation, the electric field of the incidence should be set along x-axis, while the magnetic field was along y-axis to obtain the broadband absorption. The absorptive efficiency of the three-dimensional resistive MA under normal incidence can be defined as A(ω) = 1 − R(ω) − T(ω) = 1 − |S21|2 − |S11|2, where A(ω), |S11|2 and |S21|2 are the absorbance, reflectivity and transmissivity, respectively. Due to the existence of metal backplane, the transmission (S21) is zero. Thus, the absorbance can be calculated by A(ω) = 1 − |S11|2 in this paper. After optimization, when the thickness was given as d = 8.0 mm, the three-dimensional resistive MA can achieve broadband electromagnetic wave absorption with efficiency more than 90% ranging from 4.6 to 21.4 GHz, as shown in Figure 1c. Meanwhile, during the optimization process, some parameters were noted to affect the broadband absorption performance, and are also discussed here. As shown in Figure 2a–d, when increasing the size a of resistive patch from 10.1 to 10.7 mm or decreasing the gap s between adjacent resistive patches from 0.9 to 0.3 mm, the broadband absorption would further move to the lower frequency with very slight extent. The sheet resistance of the resistive patch can be seen as an assistant factor for the improvement of absorption during the operating frequencies. As a comparison, the height of resistive patch played an important role in the enhancement of broadband absorption. With the increase of height from 7.0 to 10.0 mm, the low boundary frequency of absorption bandwidth with efficiency more that 90% would further expand from 7.3 to 4.6 GHz. Thus, it can be concluded that there was less space for further enhancement of lower-frequency absorption when the height of the three-dimensional resistive MA was given.

To fabricate the three samples in Figure 8, the screen printing technology was firstly introduced to fabricate the resistive patch. Twenty-seven metallic bamboo joints were printed on the rectangular F4B3 substrate with the different widths l = 1.0, 2.0, 3.0 and 4.0 mm. Then, the resistive patches were adhered to the other side of the F4B3 substrate periodically, and the basic components of the proposed MA were achieved. Meanwhile, the implemented 297 × 297 mm2-sized copper plate with foam-fabricated card slots was also fabricated. The multi-unit MA components (two units, three units, and four units) were selected here and then were inserted into the card slots to construct the finished samples, as shown in Figure 9.
The experimental measurements of the fabricated three samples were performed by the arch measurement system in a microwave anechoic chamber. The system is based on an Agilent E8363B network analyzer (Santa Clara, CA, USA) with two pair of broadband antenna horns, respectively, working in the frequency bands of 2–8 GHz, 8–12 GHz, and 12–20 GHz. As shown in Figure 8b, the agreement between simulations and measurements of the three samples indicated that resistive MA loaded with MRs can effectively enhance the lower-frequency absorption with almost no change to the absorbing structure and lightweight characteristic. 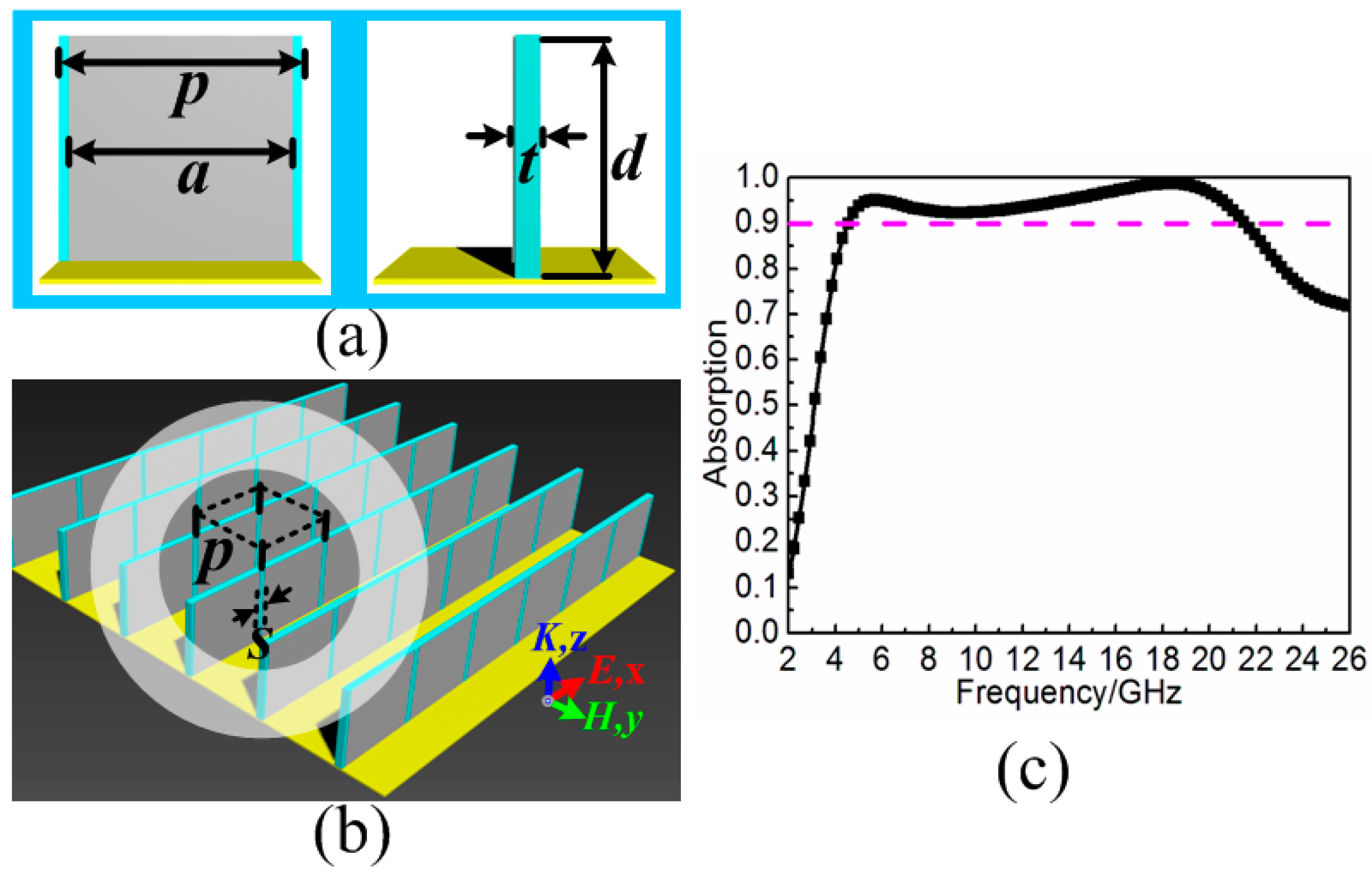 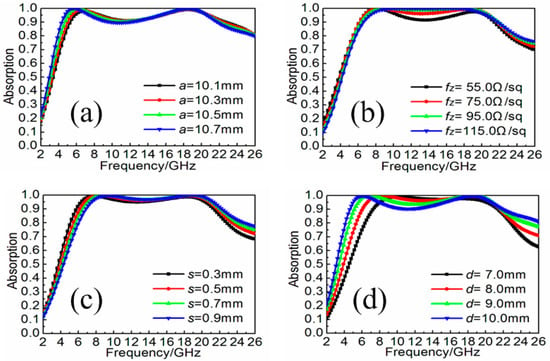 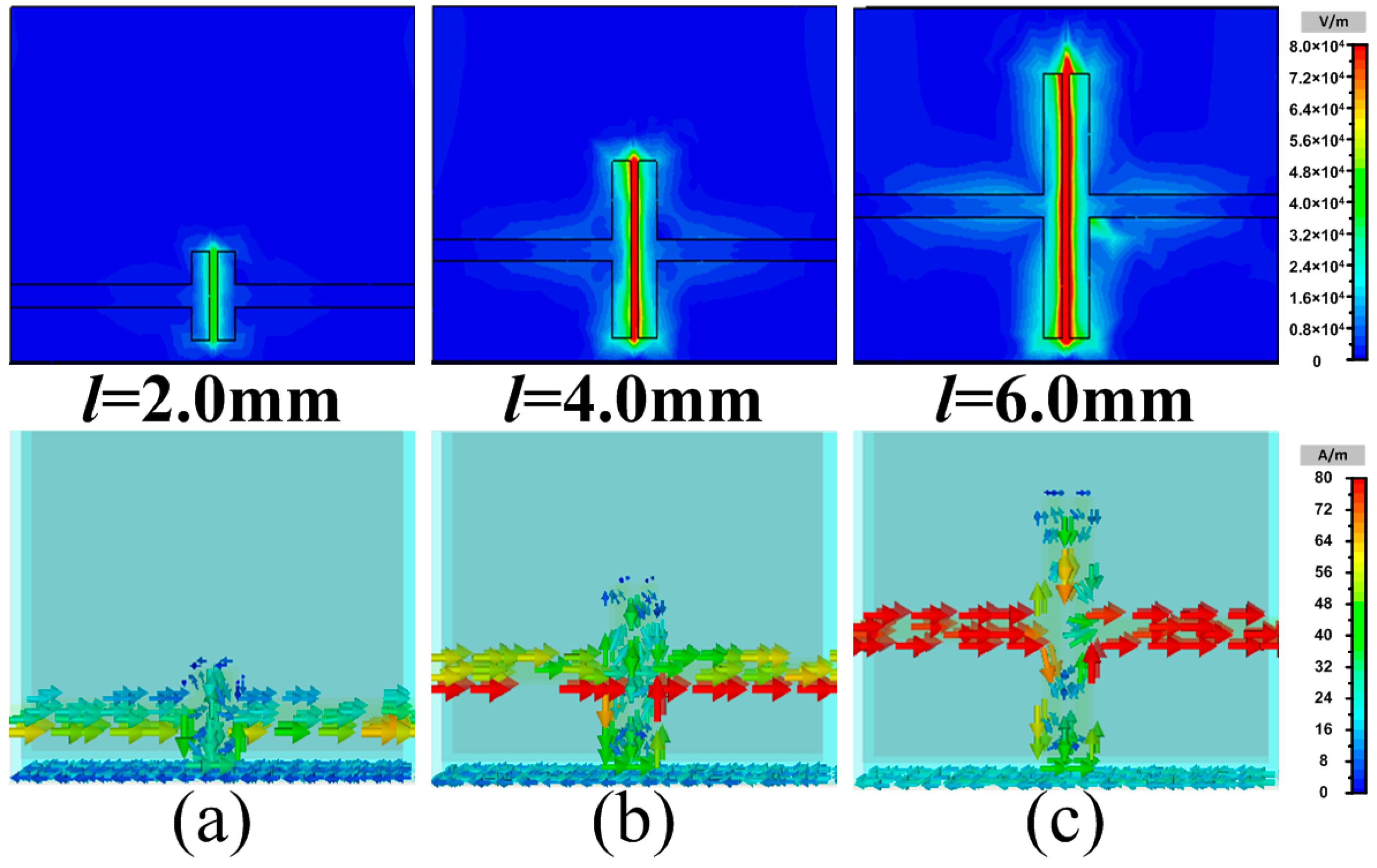 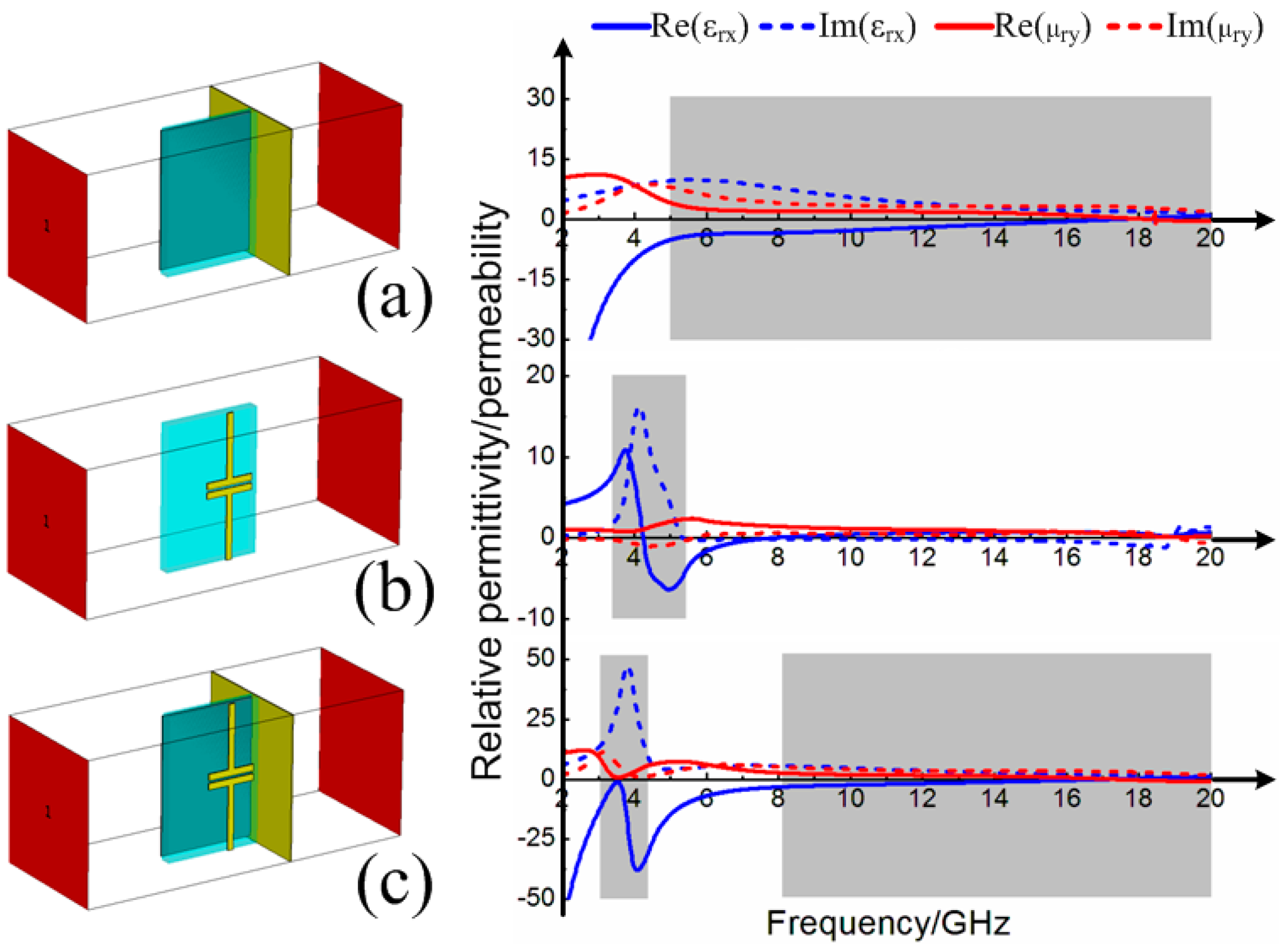 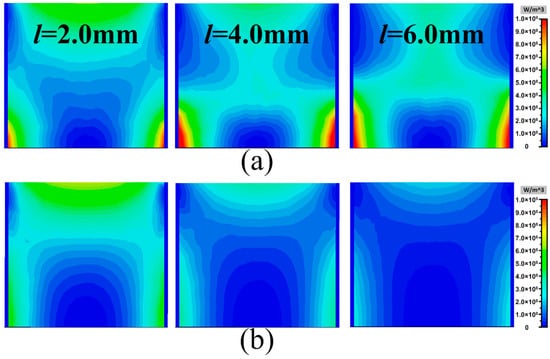 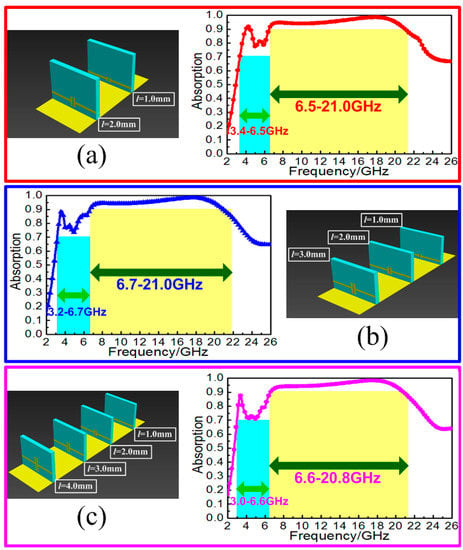 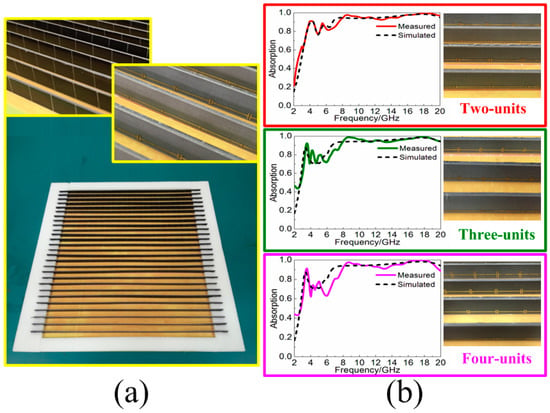 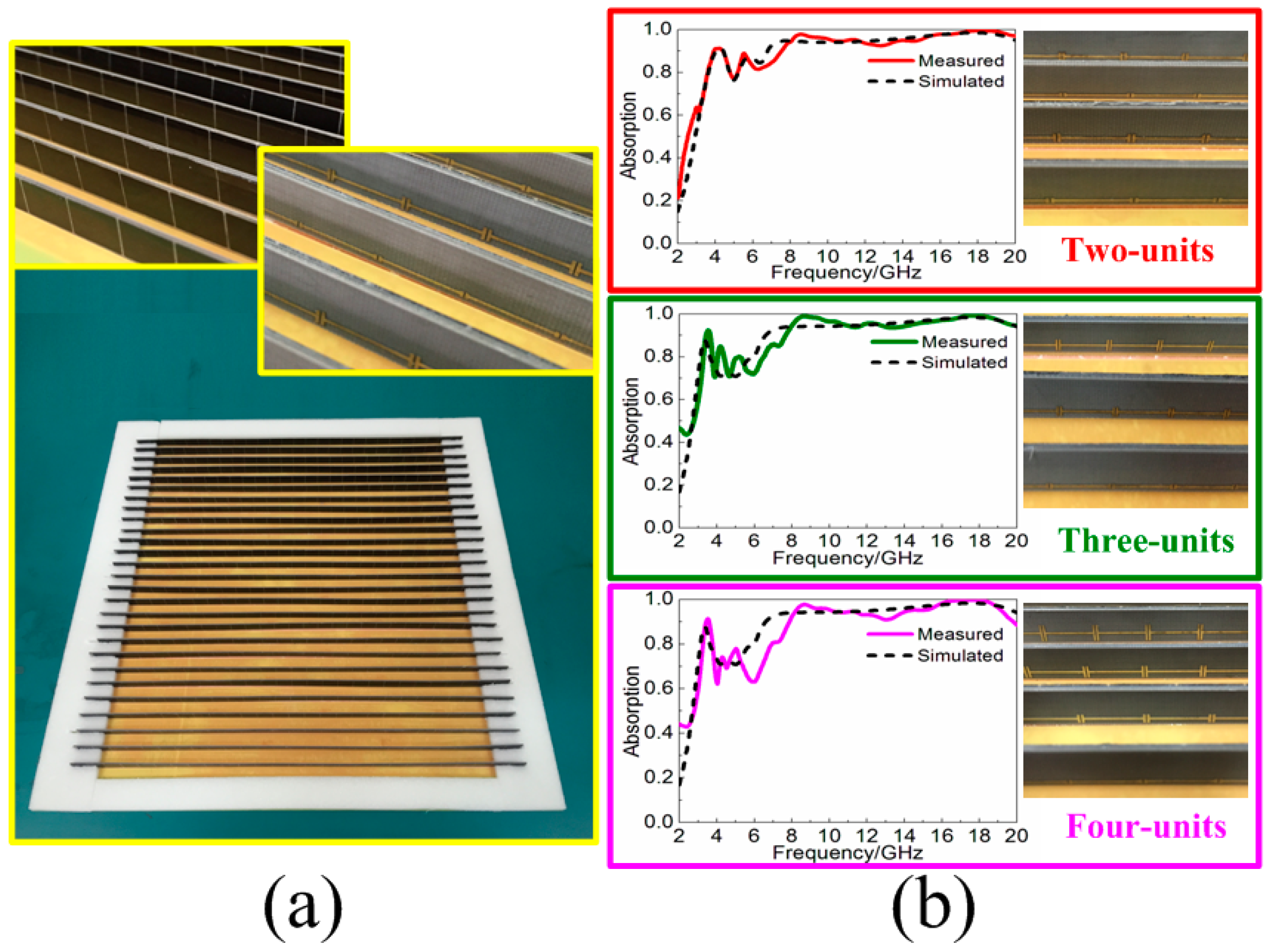