Application of High-Density Electropulsing to Improve the Performance of Metallic Materials: Mechanisms, Microstructure and Properties
Next Article in Special Issue

From Fibrils to Toughness: Multi-Scale Mechanics of Fibrillating Interfaces in Stretchable Electronics
Previous Article in Journal

Smart electronic devices have attracted much attention due to the expectation that they can be easily stretched, compressed, bended, twisted, folded, and knotted. As a type of electronic device, providing an essential functionality, stretchable electroluminescent devices with high conformity and excellent light-emitting properties are of particular interest [1,2,3,4]. Such devices would enable a plethora of new applications, such as stretchable displays [5,6,7], electronic textiles [8,9], advanced biomedical imaging and lighting [10], conformable visual readouts in arbitrary shapes [11], and novel health-monitoring devices [12]. For example, Wang and co-workers have developed stretchable electroluminescent devices using ionic conductors [13]. Recently, Larson and co-workers have described a highly-stretchable electroluminescent skin for optical signaling and tactile sensing [14]. Nevertheless, all these pioneering works are geared toward developing stretchable electroluminescent devices based on the structure of their conventional counterparts.
It is highly desirable to develop stretchable and high performance smart devices based on fibers to enable wide usage in smart electronic products. Compared to conventional planar electronic devices, devices based on fibers have been attracting increasing interest due to the beneficial combination of miniaturization, adaptability, and wearability. To date, supercapacitors [15], solar cells [16], triboelectric nanogenerators [17], human health monitors [18], and artificial muscles [19] have been reported as stretchable fiber devices. For example, Yang and co-workers fabricated a highly-stretchable supercapacitor fiber with a tensile strain of 100% [15]. Peng and co-workers developed a stretchable polymer solar cell fiber on an elastic substrate with a spring-like structure [16]. Baughman and co-workers reported highly-stretchable (up to 1320%) sheath-core conducting fibers created by wrapping carbon nanotube sheets oriented in the fiber direction on stretched rubber fiber cores [19]. However, highly-stretchable alternating current electroluminescent (ACEL) fibers, which enable both excellent light-emitting performance and stretchability, are yet to be explored. Challenges in stretchable electroluminescent fiber devices are their requirements in electrode transparency and conductivity and in the stretchability of dielectric materials. Additionally, the electroluminescent phosphors tend to be non-stretchable. Furthermore, difficulties in the complicated fabrication process of devices employing stretchable and fiber structures may be encountered. Moreover, it is important to find an all-encompassing process to fabricate electroluminescent fiber devices that can be woven into various flexible textiles or integrated into soft electronics systems for use in portable light-emitting electronic devices [20].
Here, we present a flexible and stretchable ACEL fiber via an all solution-processed scalable method. The ACEL fiber comprises an elastic core fiber from polydimethyl-siloxane (PDMS), two electrodes (inner and outer) from silver nanowires (AgNWs), and an emissive layer from ZnS:Cu phosphors/PDMS composite. The luminance of the resulted ACEL fiber is largely independent of the stretching strains. Notably, it maintained a stable luminance performance during 6000 stretch-release cycles within a 9% variation. The flexible and stretchable ACEL fiber provides high luminance with low hysteresis and demonstrates excellent mechanical and optical stability during operation.

PDMS was prepared from a base polymer and its curing agent (Sylgard 184, Dow Corning, Midland, MI, USA) with the weight ratio of 10:1. The mixture was degassed in vacuum oven for 15 min. The bubbleless mixture was injected into an airtight 2.5-mm-diameter plastic tube template. The mixture was cured at 60 °C for 90 min. Then, the stretchable PDMS fiber was removed from the template.

Starting solution of 10 mg/mL AgNWs ethanol dispersion was obtained from ColdStones Tech. Co. Ltd. (Suzhou, China), wherein the diameters and lengths of the AgNW were 90–110 nm and 30–40 μm, respectively. This solution was diluted to 0.5 mg/mL by adding more ethanol. The AgNWs were spray coated onto PDMS fiber. In order to obtain a homogeneous layer, the PDMS fiber was rotated along with its axis while being heated during spray-coating processes. Electroluminescent phosphor particles (ZnS:Cu) were purchased from Lonco Co. Ltd. (Hong Kong, China) and blended with PDMS at a weight ratio of 2:1. The composite was diluted by adding n-hexane to 25% the weight of the phosphor. The light-emitting layer was obtained by dip coating this diluted composite onto the AgNWs coated fiber. Then the fiber with light-emitting layer was cured at 60 °C for 90 min. Finally, AgNWs were spray-coated as the outer electrode.

All measurements were performed under ambient conditions. Copper tape was used to electrically connect the AgNW electrodes of the fiber devices to the external power source for further tests. The as-fabricated fiber device was placed in a tensile stage with two clamps which can control the stretch accurately. A function generator (DG4102, Rigol, Beijing, China) connected with a power amplifier (Model 615-10, Trek, Medina, NY, USA) was used to power the as-fabricated fiber device. The electroluminescence emission spectra and luminance were measured by a spectroradiometer (SpectraScan PR-788 with a MS-55 lens, Photo Research, Syracuse, NY, USA). The surface morphology was imaged by SEM measurement (Supra55, Zeiss, Oberkochen, Germany).

In conclusion, we have reported an alternating current electroluminescent fiber device, which provides unprecedented features, including high stretchability, stability, and excellent light-emitting performance without any noticeable hysteresis, through a simple, scalable, and low-cost fabrication process. In particularly, we found the fabricated fibers provide uniform luminance regardless of viewing angles and maintained a stable electroluminescent performance when subjected to bending, stretching, and knotting. These exceptional features endow our ACEL fiber a luminance of 14.63 cd/m2 at 200 Vp and 1 kHz when it was stretched to 80% strain, and a maximum luminance of 307.3 cd/m2 at 500 Vp and 5 kHz at 20% strain. Furthermore, the remarkable stability was demonstrated by performing over 6000 stretching-releasing cycles to 50% strain, where the device maintained a stable luminance. In addition, the experimental results fit well with classic theoretical predictions. Due to the easy fabrication process, stable light-emitting performance, and good stretchability of the developed fibers, we believe our stretchable ACEL fiber will conceivably open up new prospective fields and affect various devices encompassing wearable light-emitting electronics, biomedical devices, and other unprecedented applications for the next generation of optoelectronic devices. 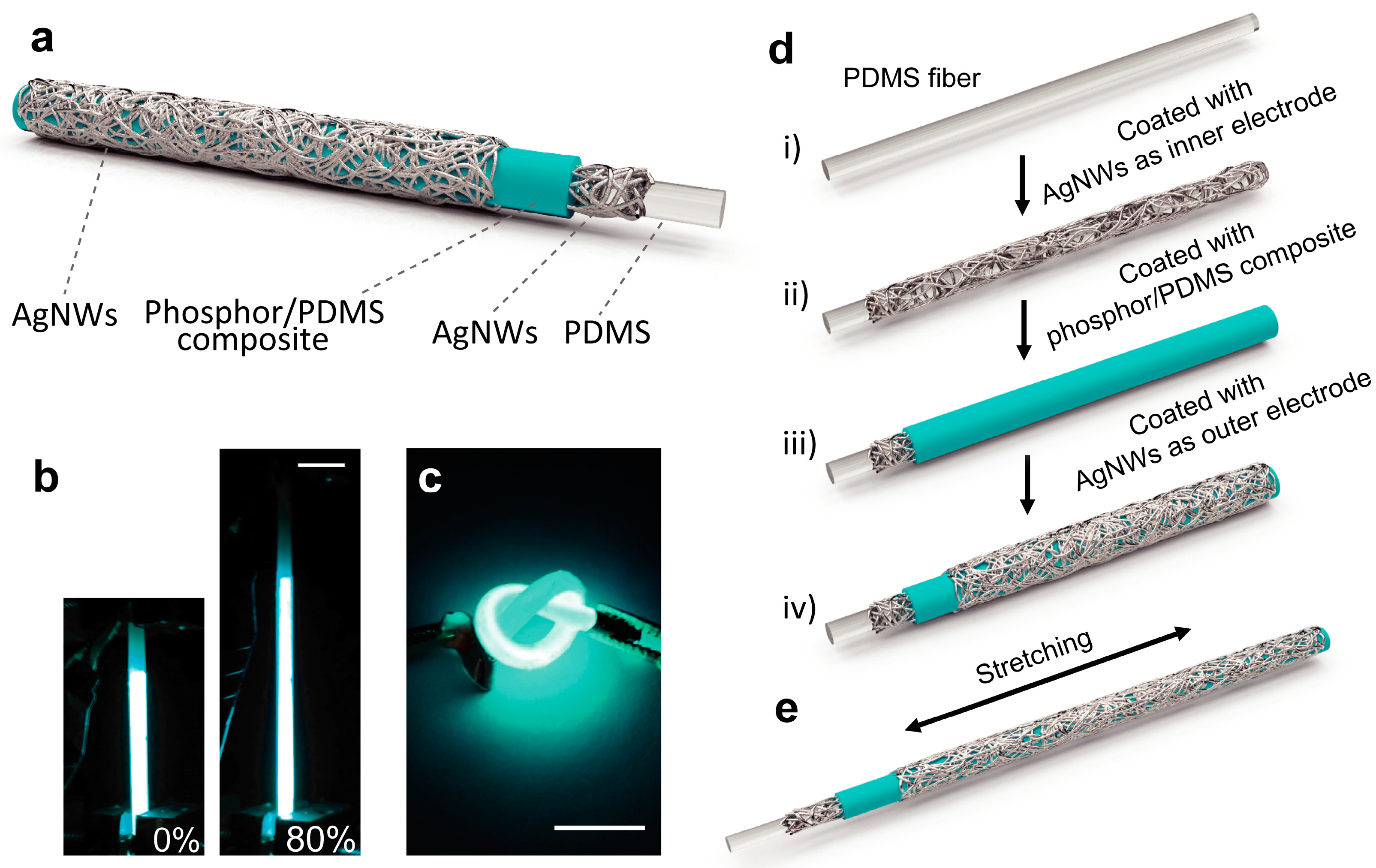 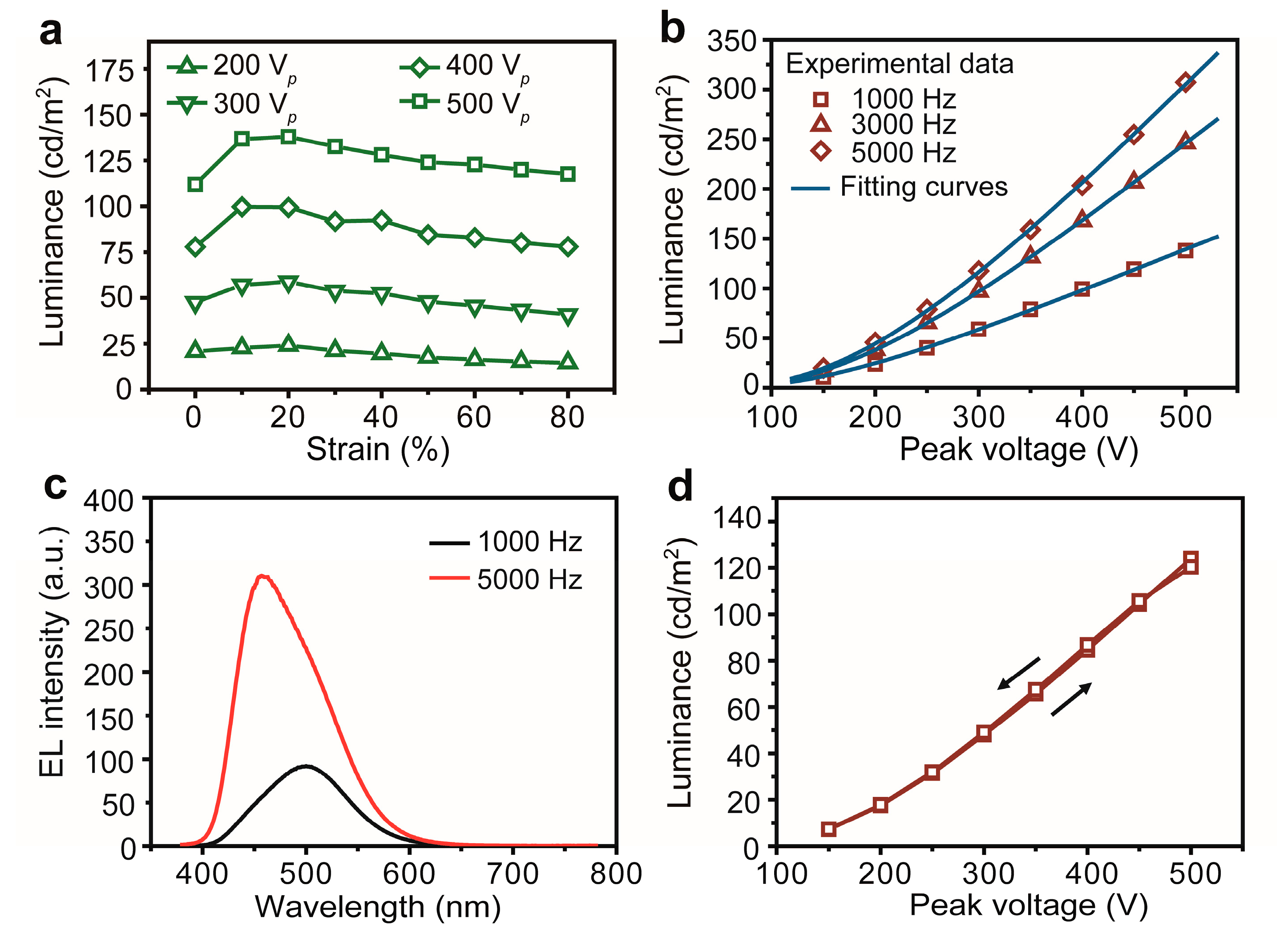 Table 1. Brief summary of performances reported on light-emitting fibers.
Table 1. Brief summary of performances reported on light-emitting fibers.
a) ES is for electrospinning technique; b) Our current work.
© 2018 by the authors. Licensee MDPI, Basel, Switzerland. This article is an open access article distributed under the terms and conditions of the Creative Commons Attribution (CC BY) license (http://creativecommons.org/licenses/by/4.0/).
We use cookies on our website to ensure you get the best experience. Read more about our cookies here.
Accept
We have just recently launched a new version of our website. Help us to further improve by taking part in this short 5 minute survey here. here.
Never show this again