Review on the Production of Polysaccharide Aerogel Particles

The purpose of this work was to investigate the effect of multifunctionality on material properties of synthetic polymer aerogels. For this purpose, we present the synthesis and characterization of monolithic dendritic-type urethane-acrylate monomers based on an aliphatic/flexible (Desmodur N3300), or an aromatic/rigid (Desmodur RE) triisocyanate core. The terminal acrylate groups (three at the tip of each of the three branches, nine in total) were polymerized with 2,2′-azobis(isobutyronitrile) (AIBN) via free radical chemistry. The resulting wet-gels were dried with supercritical fluid (SCF) CO2. Aerogels were characterized with ATR-FTIR and solid-state 13C NMR. The porous network was probed with N2-sorption and scanning electron microscopy (SEM). The thermal stability of aerogels was studied with thermogravimetric analysis (TGA). Most aerogels were macroporous materials (porosity > 80%), with high thermal stability (up to 300 °C). Aerogels were softer at low monomer concentrations and more rigid at higher concentrations. The material properties were compared with those of analogous aerogels bearing only one acrylate moiety at the tip of each branch and the same cores, and with those of analogous aerogels bearing norbornene instead of acrylate moieties. The nine-terminal acrylate-based monomers of this study caused rapid decrease of the solubility of the growing polymer and made possible aerogels with much smaller particles and much higher surface areas. For the first time, aliphatic/flexible triisocyanate-based materials could be made with similar properties in terms of particle size and surface areas to their aromatic/rigid analogues. Finally, it was found that with monomers with a high number of crosslinkable groups, material properties are determined by multifunctionality and thus aerogels based on 9-acrylate- and 9-norbornene-terminated monomers were similar. Materials with aromatic cores are carbonizable with satisfactory yields (20–30% w/w) to mostly microporous materials (BET surface areas: 640–740 m2 g−1; micropore surface areas: 360–430 m2 g−1). View Full-Text
Keywords: acrylate; aerogel; dendritic; free radical polymerization; polymeric material; polyurethane aerogels; supercritical drying; porous networks acrylate; aerogel; dendritic; free radical polymerization; polymeric material; polyurethane aerogels; supercritical drying; porous networks
►▼ Show Figures 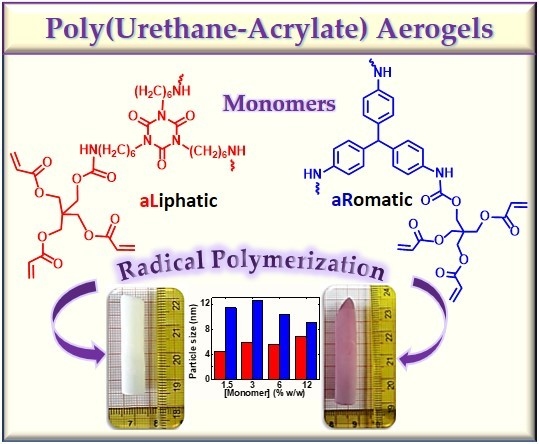