The medium-range atomic structure of magnesium and barium aluminosilicate glasses doped with Gd2O3 as a model rare earth oxide is elucidated using molecular dynamics simulations. Our structure models rationalize the strong dependence of the luminescence properties of the glasses on their chemical composition. The simulation procedure used samples’ atomic configurations, the so-called inherent structures, characterizing configurations of the liquid state slightly above the glass transition temperature. This yields medium-range atomic structures of network former and modifier ions in good agreement with structure predictions using standard simulated annealing procedures. However, the generation of a large set of inherent structures allows a statistical sampling of the medium-range order of Gd3+ ions with less computational effort compared to the simulated annealing approach. It is found that the number of Si-bound non-bridging oxygen in the vicinity of Gd3+ considerably increases with growing ionic radius and concentration of network-modifier ions. In addition, structure predictions indicate a low driving force for clustering of Gd3+, yet no precise correlation between the atomic structure and luminescence lifetimes can be conclusively established. However, the structure models provided in this study can serve as a starting point for future quantum mechanical simulations to shed a light on the relation between the atomic structure and optical properties of rare earth doped aluminosilicate glasses. View Full-Text
Keywords: glass; atomistic simulations; rare earth; aluminosilicates glass; atomistic simulations; rare earth; aluminosilicates
►▼ Show Figures 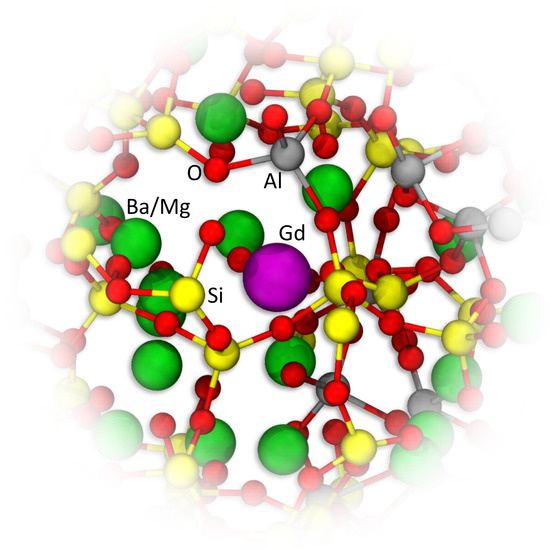