There is an increasing interest in developing porous metals or metallic foams for functional and structural applications. The study of the physical and mechanical properties of porous metals is very important and helpful for their application. In this paper, a novel sintered multilayer wire mesh porous plate material (WMPPs) with a thickness of 0.5 mm–3 mm and a porosity of 10–35% was prepared by winding, pressing, rolling, and subsequently vacuum sintering them. The pore size and total size distribution in the as-prepared samples were investigated using the bubble point method. The uniaxial tensile behavior of the WMPPs was investigated in terms of the sintering temperature, porosity, wire diameter, and manufacturing technology. The deformation process and the failure mechanism under the tensile press was also discussed based on the appearance of the fractures (SEM figures). The results indicated that the pore size and total size distribution were closely related to the raw material used and the sintering temperature. For the WMPPs prepared by the wire mesh, the pore structures were inerratic and the vast majority of pore size was less than 10 μm. On the other hand, for the WMPPs that were prepared by wire mesh and powder, the pore structures were irregular and the pore size ranged from 0 μm–50 μm. The experimental data showed that the tensile strength of WMPPs is much higher than any other porous metals or metallic foams. Higher sintering temperatures led to coarser joints between wires and resulted in higher tensile strength. The sintering temperature decreased from 1330 °C to 1130 °C and the tensile strength decreased from 296 MPa to 164 MPa. Lower porosity means that there are more metallurgical joints and metallic frameworks resisting deformation per unit volume. Therefore, lower porosities exhibit higher tensile strength. An increase of porosity from 17.14% to 32.5% led to the decrease of the tensile strength by 90 MPa. The coarser wires led to a bigger contact area between the interconnecting wires, resulting in a stronger sintering neck that exhibited higher tensile strength. The wire diameter increased from 81 μm to 122 μm and the tensile strength increased from 296 MPa to 362 MPa. The fracture morphology showed that the wires experience necking deformation and ductile fracture.
Keywords: stainless steel; metal porous materials; pore size distribution; tensile behavior; tensile strength stainless steel; metal porous materials; pore size distribution; tensile behavior; tensile strength

Porous metal materials not only possess the overall characteristics of metal, but also a series of special properties, such as a high specific strength, high specific stiffness, high damping capacity, high thermal insulation, and so on. Products, such as ultra-light structural components, damping devices, filtration or purification plants, heat-sinks, and cooling systems are produced by metal porous materials and play a significant role in environmental protection, aerospace and many other fields. In most case, the mechanical properties of materials decide their usability [1,2,3,4,5,6]. The mechanical properties of metal porous materials depend on the original metals, but the manufacturing process, porosity, and pore structure of the metal porous materials also exert a great influence on their mechanical properties. For examples, Fei Xu and his companions [7] investigated the tensile behaviors of sintering stainless steel powder porous materials and discovered that when the porosity is raised from 22.1% to 40%, the tensile strength decrease from 150 MPa to 45 MPa; when the sintering temperature decreased from 1200 °C to 1150 °C, the tensile strength decrease from 150 MPa to 125 MPa. Russian professor Kostornov investigated the tensile properties at room temperature and at high temperature for the sintering metal fiber porous materials [8]. The results indicated that elongation decreases with the increase in porosity and that the tensile strength at room temperature is much higher than the tensile strength at high temperature. Recently, foamed aluminum has received much attention and research due to its high porosity and light mass. The constitutive model, named the Gibson-Ashby model, accurately describes the structure and performance of the open-cell foamed aluminum, and this model is widely approved in international community [9]. The completed research shows that when the relative density of the foamed aluminum is 25%, the tensile strength ranges between 6.2 MPa–10.8 MPa, and the Young modulus ranges between 4.1 GPa–6.0 GPa. Thus, it is clear that the mechanical properties of foamed aluminum are strongly associated with its porosity. On the other hand, this research also verifies the applicability of the Gibson-Ashby model.
The sintered metal wire/fiber porous materials are produced by compaction and the subsequent vacuum solid-phase sintering of metal wires or metal fibers. A Japanese professor Chino, Yasumasa put forward a methodology that takes advantage of the magnetic field force to layer the short metal fiber directionally, and based on the directional short fiber, to fabricate metal fiber felt. Thus, the metal skeleton and pores showed some form of regularity [10]. Professor Guo He developed the entangled metallic wire material, which was fabricated by long steel wires [11,12,13]. The steel wire was preformed through wire distortion and then sintered in a vacuum furnace. The uniaxial tensile property and compressive property for this porous metal was also investigated by their team. Professor Zhaoyao Zhou and his team provided a new method to fabricate a type of porous metal, known as porous twisted wire material by using the short fiber [14]. The wire skeleton and the pore structure of this porous metal were completely random and the pore size distribution was also irregular. Their research showed that when the porosity of the porous metal was 46%, the tensile strength was 112.75 MPa, which is much higher than that of the sintering powder porous metal at the same porosity [7]. The sintered multi-layer stainless steel wire mesh porous plate (WMPPs) had been designed and fabricated in this paper and the structure characteristics WMPPs had been investigated. In addition, the tensile tests for the WMPPs had been performed to investigate the effects of sintering parameters, porosities and wire diameters on the tensile properties. The deformation under the tensile stress and the fracture mechanism also had been analyzed.

According to different weaving techniques by warp and weft wires, there are three textile constructions: the plain-weave, the twill-weave and the stain-weave. The plain weave is the simplest and the constructions of the front and the back are all the same. In this paper, the plain-weave wire mesh of stainless steel was used to fabricate the sintered multilayer wire mesh porous plate (WMPP); stainless steel powder was also used. The fabrication method of the WMPP can be described in the following steps. First, the stainless steel wire mesh is fastened to a fixture, and the fixture is assembled in the collecting roller of an electric winch. There is a rectangular plate (or a cylinder), called the core-plate, which belongs to the fixture. Once the electric winch is pulsed-on, the wire mesh will be enwound on the plate tightly and rapidly. Before enwinding on the core-plate, the wire mesh goes through a platform, which is covered with metal powder. Above the platform by about 0.5 mm is a baffle plate, which ensures that the powder lying on the wire mesh is at a certain thickness. The metal powder will be enclosed in the interlamination of the multilayer wire mesh during the enwinding process on the core-plate. The enwinding process is shown in Figure 1a. After the enwinding process, a composite board that consists of the core-plate and the multilayer wire mesh with metal powder is obtained. Then, the core-plate is taken down from the composite board, and the remaining wire mesh and powder constitute the sample. The core-plate is of modular design for easy disassembly of the enwinding wire mesh and the core-plate, shown in Figure 1b. Next, the sample is pressed in a hydropress, and then the compacted sample is rolled in a rolling mill. In this way, the preform of the WMPP is obtained. Finally the sample is put into a vacuum furnace to sinter. The complete fabrication processes is shown in Figure 1c.

The pore structure and the pore skeleton were observed by an ultra-depth microscope (Keyence VHX-5000, KEYENCE, Osaka, Japan). A scanning electron microscope (Nova NANOSEM-430, Thermo Fisher Scientific Inc, Hillsboro, AK, America) was also used to observe the bonding state between the interlayers of the wire meshes and the appearance of fractures in the tensile samples. The tensile test was performed with an electronic universal mechanical testing machine (NO: AG-100NX, Shimadzu, Kyoto, Japan).
The pore size and pore distribution are the primary parameters of the structural characteristics of the porous materials. In this paper, the pore size and pore distribution of the WMPPs were tested by use of the bubble point method. An Integrity Test Instrument (NO: GAOQ FLA-40, GaoQ Functional Materials Co., Ltd. Nanjing, China) was used to measure the pore size and the total size distribution. When the pores of porous materials are blocked by a wetting agent, a certain pressure is needed in order to open the pores. Because of the surface tension of the wetting agent and the small size of the pores, a high pressure is needed. In this experiment, the pores of the WMPPs were full of alcohol, and it was discharged by means of gas pressure. The relationship between gas pressure and pore size is formulated as: where D is the pore diameter (μm), γ is the surface tension of wetting agent (N/m), θ is the wetting angle, ΔP is the differential pressure of the two sides of as-prepared samples (KPa).
The average porosities of sintered wire mesh porous plate (WMPP) are calculated by the quality-volume method, which is formulated as: where P is the average porosity of WMPP, M is the mass of WMPP (g), V is the volume of WMPP (cm3), and is the density of the solid metal of original wire mesh (g/cm3).

This research work was supported by the Science and Technology Program of Guangzhou, China (No. 201604016015). 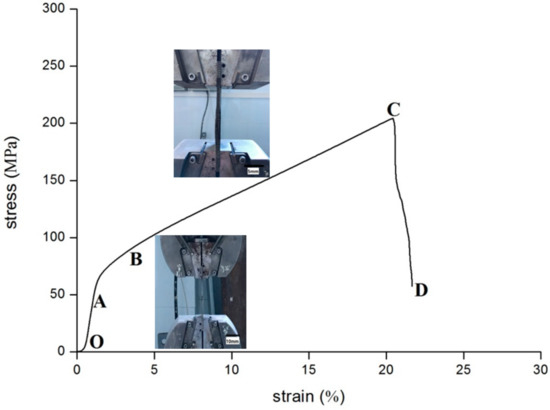 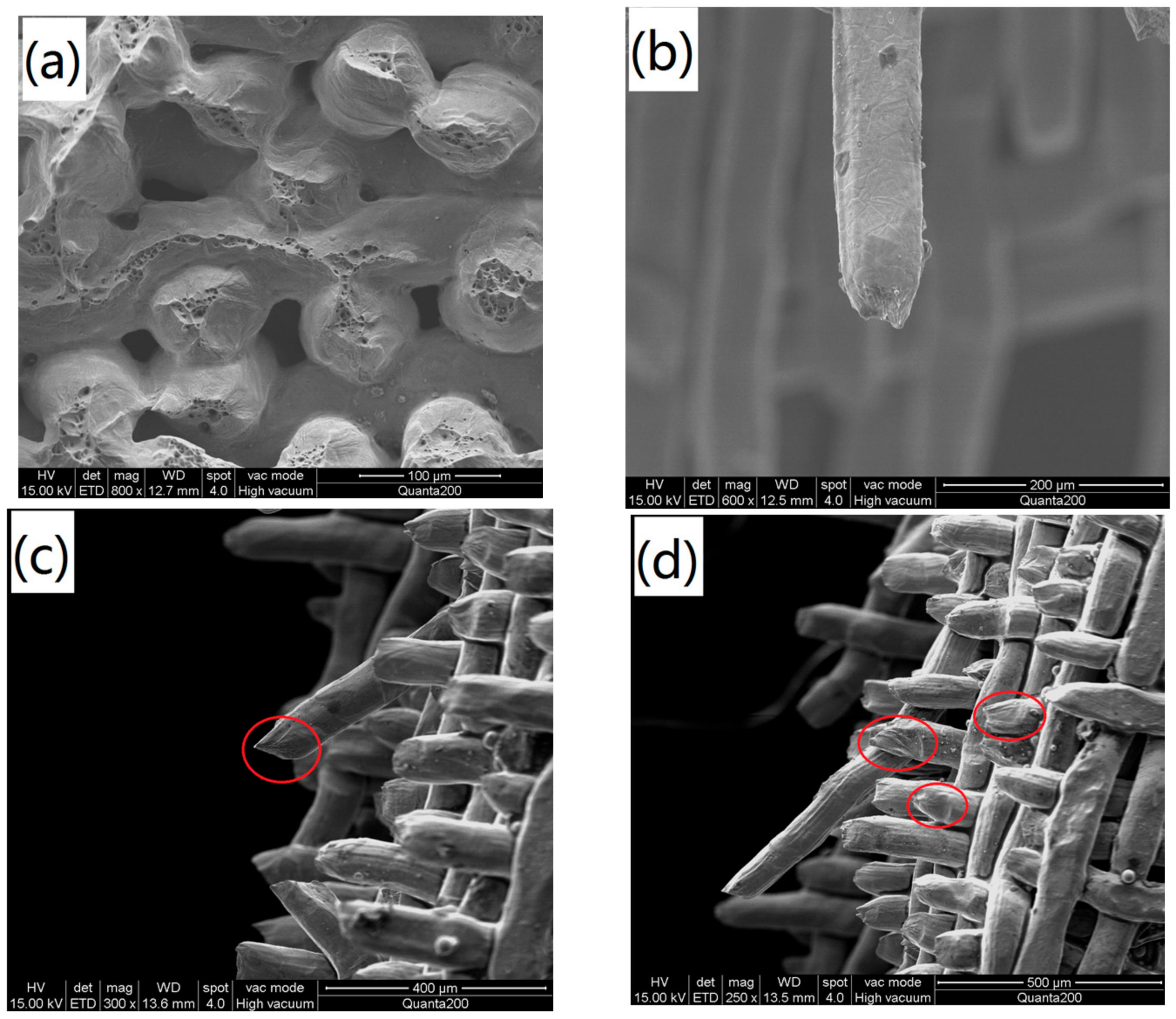