:
The biodegradable inhibitors, which could effectively reduce the rate of corrosion of carbon steel, were investigated by potentiodynamic polarization and electrochemical impedance spectroscopy (EIS). The mixed-type inhibitors extracted from Eriobotrya japonica Thunb. leaf exhibited excellent inhibition performance, and the inhibition efficiency for carbon steel reached 90.0% at 298 K in hydrochloric acid. Moreover, the adsorption mechanism of the inhibitors on a carbon steel surface is described by the Langmuir adsorption isotherm. Simultaneously, the corrosion morphology of the carbon steel and the inhibitor structure were analyzed by scanning electron microscope (SEM) and Fourier transform infrared spectroscopy (FT-IR), respectively.
Keywords:
carbon steel; Eriobotrya japonica Thunb.; corrosion inhibitor

At present, various corrosion inhibitors such as inorganic and synthetic inhibitors have been employed in descaling and metal pickling processes [1,2]. However, their low bio-degradability and high cost severely limit their applications. Thus, the development of environmentally friendly, low-cost inhibitors is desirable and urgent [3,4]. Plant extracts are biodegradable in a natural environment, which allows them to serve as environmentally friendly inhibitors in acid solution [5]. Hydrochloric acid is one of the most widely used inorganic acids for metal pickling and descaling in industrial processes [6,7]. However, the acid is highly corrosive to metals and their alloys, especially for carbon steel (C-steel). Corrosion inhibitors have been extensively used to slow down the corrosion rate of C-steel [8]. Therefore, the development of plant extract inhibitors for C-steel pickling provides a new direction for these industrial processes. In recent years, green plant extracts of morus alba pendula [9], Justicia gendarussa [10], Zenthoxylum alatum [11], Salvia officinalis [12], Ginkgo [13], Musa paradisica [14], Tagetes erecta [15], Gum arabic [16], Artemisia pallens [17], lupine [18], Jasminum nudiflorum Lindl. [19], Dendrocalamus brandisii [20], aqueous garlic peel [21], henna [22], Nypa fruticans Wurmb [23], Damsissa [24], Mentha pulegium [25], olive [26], and Nigella sativa L. [27] have been widely studied and examined as effective inhibitors. However, to our knowledge, the corrosion inhibition behavior of Eriobotrya japonica Thunb. leaf extract (EJTLE) on C-steel in hydrochloric solution has not yet been reported.
Eriobotrya japonica Thunb. belongs to the genus Rosa, which is prevalent in most provinces of southern China. The fruit of this plant, one of the important subtropical fruits, and its leaves have been used medicinally to treat coughs, colds, chronic bronchitis, phlegm, high fever, and gastro-enteric disorders [28].
The chemical composition of EJTLE largely consists of ursolic acid, oleanolic acid, and flavonoids. The molecular structures of ursolic acid [29], oleanolic acid, and flavonoids [30] are shown in Figure 1. These chemical constituents have anti-corrosion effects due to their heterocyclic structures and have been extensively researched. In general, these organic compounds contain heteroatoms such N, S, and O and are classified as heterocyclic compounds, which are regarded as effective adsorption centers.
In this work, the corrosion effect of EJTLE on C-steel was investigated by potentiodynamic polarization, electrochemical impedance spectroscopy (EIS), Fourier transform infrared spectroscopy (FT-IR), and scanning electronic microscopy (SEM). The adsorption behavior of EJTLE on the surface of carbon was also investigated.

Figure 2 shows the open circuit potential curves of C-steel in 1 M HCl solution with different concentrations of EJTLE at different temperatures prior to electrochemical analysis. In Figure 2, the shape of the inhibition curves is similar to that of the uninhibited ones, suggesting that lower concentrations (below 0.06 g·L−1) of inhibitors did not significantly change the corrosion behavior of C-steel. Interestingly, the open circuit potential curve of carbon steel (C-steel) increases at first and then slowly decreases in the acid solution with higher concentrations of corrosion inhibitors (above 0.06 g·L−1). This phenomenon is related to the adsorption of inhibitors on the C-steel surface. The inhibitors contain heteroatoms and π bonds adsorbed on the electrode surface, resulting in higher electron density on the C-steel surface and negative electrode potential.

The Nyquist impedance plots and Bode plots of C-steel in 1 M HCl solution with and without different concentrations of EJTLE are shown in Figure 4. After the addition of inhibitors, the Nyquist and Bode diagrams of C-steel were similar to the Nyquist and Bode diagrams of the blank corrosion solution and only occured as capacitive arcs. The capacitive arc reflects the relaxation process of the interface double layer and the charge transfer resistance. The diameter of the capacitive arc increases with increasing inhibitor concentration, which indicates that the corrosion of the C-steel electrode in 1 M HCl solution is inhibited. In combination with the corresponding Bode diagram, this means that the inhibited corrosion of C-steel was controlled by a time constant. Obviously, there is no Warburg impedance or inductive reactance arc in Nyquist plots.
We used the equivalent circuit model shown in Figure 5 to fit the data results of the electrochemical impedance spectroscopy (EIS). Figure 6 shows the variation of inhibition efficiency (η) in the presence of different concentrations of EJTLE at 298 K, 308 K, and 318 K. The inhibition efficiency of the plant inhibitors increased with increasing concentration. Additionally, the inhibition efficiency of the plant extract decreased as temperature increased. The results show that the plant inhibitors exhibit enhanced anti-corrosion performance, which can be used for high-efficient inhibitors in C-steel pickling and descaling processes.

Generally, organic inhibitors have been accomplished by the adsorption of a protective film at the metal-solution interface, and the mechanism can be described by an adsorption isotherm. Figure 7 represents the fitting of C/θ versus C with a linearly dependent coefficient near 1.

It can be seen from Figure 9 that the polished C-steel surface is smooth and without obvious scratches. Figure 10 shows the surface graphs of the C-steel surface exposed to 1 M HCl in the absence and presence of 0.5 g·L−1 EJTLE at three temperatures. It can be clearly seen from Figure 10a–c that the rough surface with several grooves was caused by uniform corrosion in acid solution. Conversely, in the presence of 0.5 g·L−1 plant inhibitors, the surface (Figure 10d–f) of C-steel shows relatively smooth polishing scratches. In light of these findings, we can conclude that the plant inhibitors do prevent the corrosion of carbon steel in 1 M HCl solution by the formation of adsorbed molecules on the surfaces of C-steel specimens.

All electrochemical experiments were performed with a CHI660B electrochemical workstation (CHI Co., Shanghai, China) in a conventional three-electrode cell system with Q235 C-steel (1.0 cm × 1.0 cm) embedded in epoxy resin holders as the working electrode (WE), a platinum gauze as the counter electrode (CE), and a silver-silver chloride (Ag/AgCl) electrode (saturation concentration KCl) with a Luggin-Haber capillary as the reference electrode (RE). In this test, all electrochemical experiments were conducted after the metal specimens were immersed in 1 M HCl solution at open circuit potential (OCP) for 1 h until a steady state was obtained. The potentiodynamic polarization experiments employed the following parameter: scanning from −300 to +300 mV (versus OCP) at a scanning rate of 0.5 mV·s−1. The electrochemical impedance spectra were measured at OCP with 10 mV AC amplitude over a frequency range of 100 kHz to 10 mHz. EIS data analysis was performed via ZView 3.0 version software (Scribner Associates Inc., Southern Pines, NC, USA).

The corrosion microscopy of the C-steel surface before and after immersion in 1 M HCl solution with and without 0.5 g·L−1 EJTLE at different temperatures for 1 h was characterized by TESCAN MIRA 3 (TESCAN, Brno, Czech Republic) scanning electronic microscopy (SEM). The accelerating voltage for SEM was 15 kV. In addition, FT-IR analysis (KBr pellet method) was performed with a Nicolet iS50 FT-IR Spectrometer (Thermo Fisher Scientific, Waltham, MA, USA) to characterize the product structure of EJTLE.

This work is supported by the National Natural Science Foundation of China (No. 61271059), the Natural Science Foundation Project of Chongqing (No. 2010BB4246), the Student Research Training Program (No. CQU-SRTP-20163360), and the Graduate Students Research Project of Chongqing (No. CXB14220). We thank LetPub (www.letpub.com) for its linguistic assistance during the preparation of this manuscript. 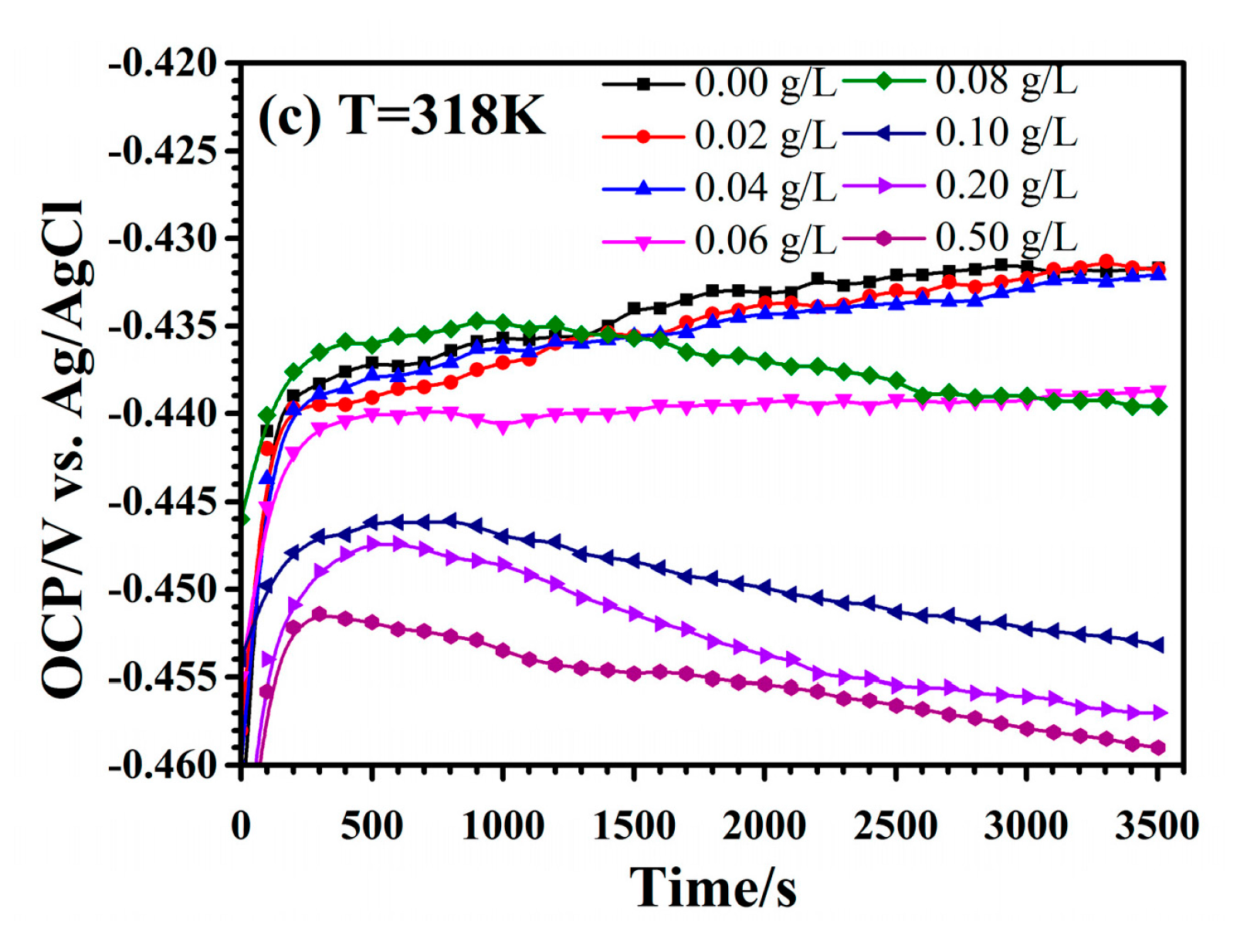 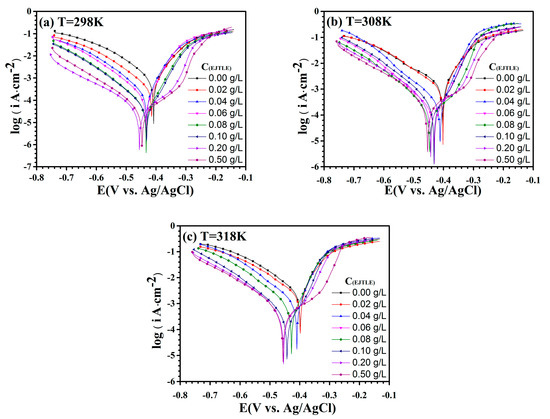 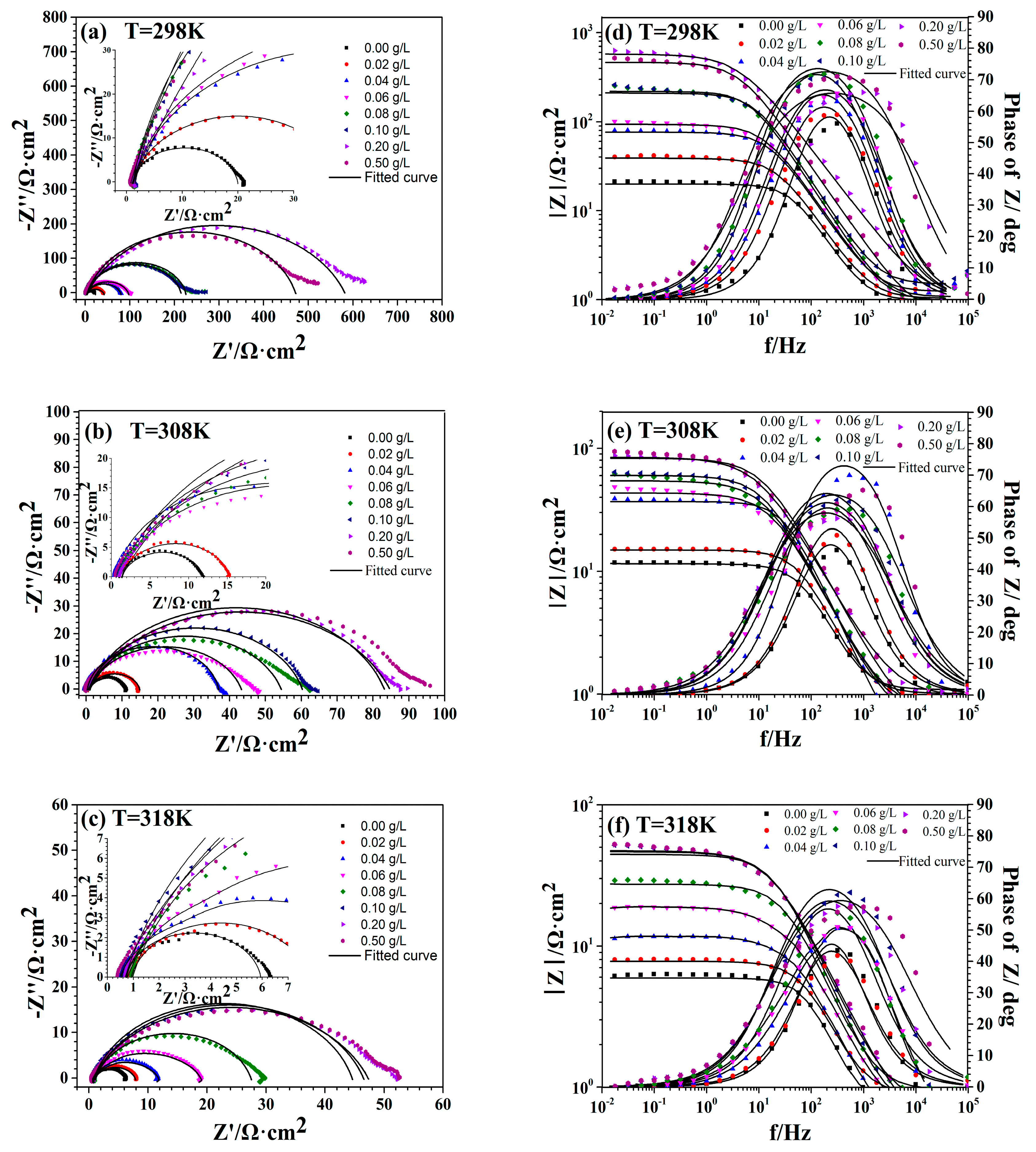 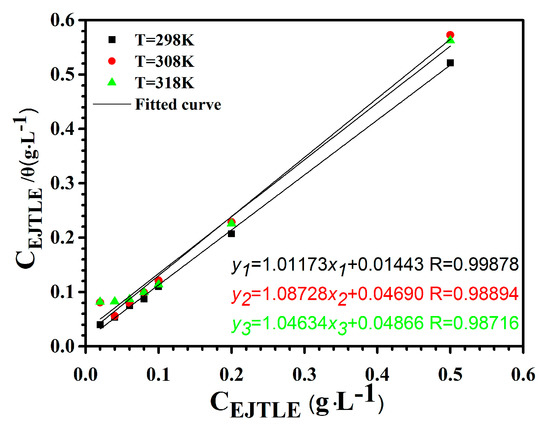 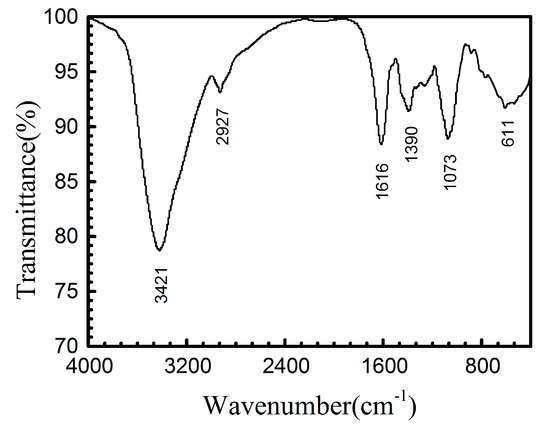 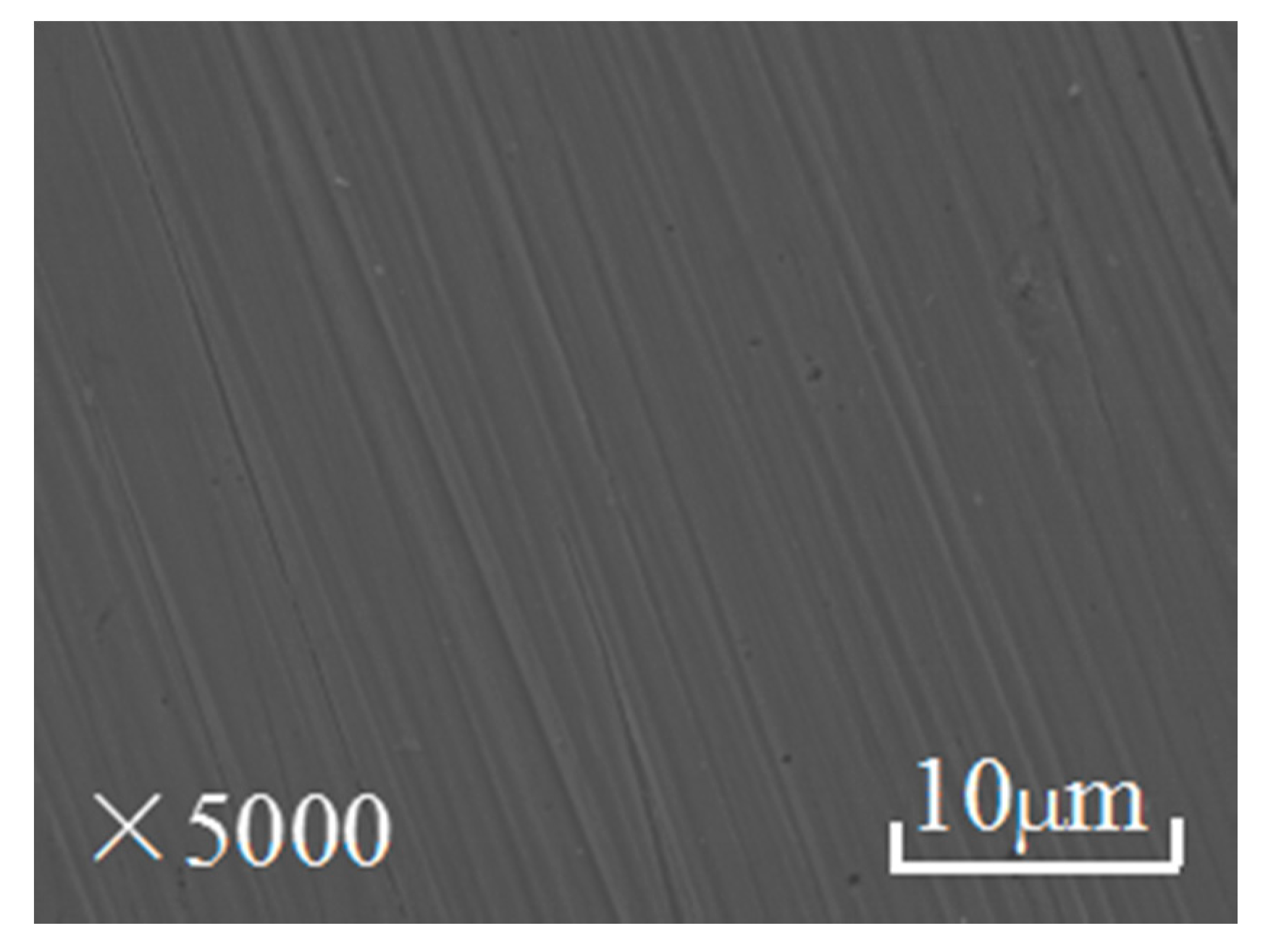