In this review, we give an overview of the properties and applications of samarium monosulfide, SmS, which has gained considerable interest as a switchable material. It shows a pressure-induced phase transition from the semiconducting to the metallic state by polishing, and it switches back to the semiconducting state by heating. The material also shows a magnetic transition, from the paramagnetic state to an antiferromagnetically ordered state. The switching behavior between the semiconducting and metallic states could be exploited in several applications, such as high density optical storage and memory materials, thermovoltaic devices, infrared sensors and more. We discuss the electronic, optical and magnetic properties of SmS, its switching behavior, as well as the thin film deposition techniques which have been used, such as e-beam evaporation and sputtering. Moreover, applications and possible ideas for future work on this material are presented. Our scope is to present the properties of SmS, which were mainly measured in bulk crystals, while at the same time we describe the possible deposition methods that will push the study of SmS to nanoscale dimensions, opening an intriguing range of applications for low-dimensional, pressure-induced semiconductor–metal transition compounds. View Full-Text
Keywords: SmS; switchable material; thin films; magnetic properties; optical properties; deposition techniques SmS; switchable material; thin films; magnetic properties; optical properties; deposition techniques
►▼ Show Figures 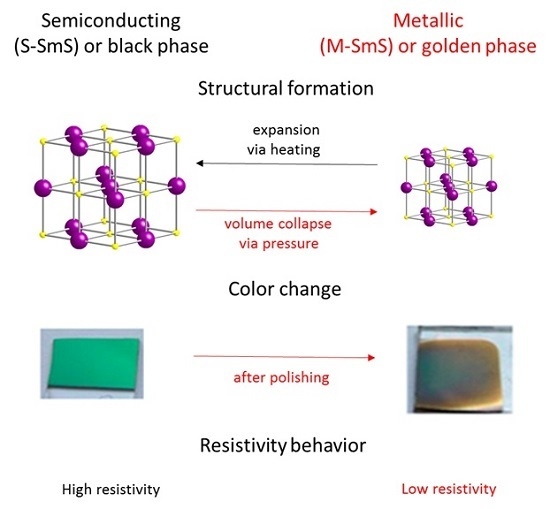