We investigated the preparation of well-dispersed core-shell ceria-poly(vinylpyrrolidone) (PVP) nanoparticles with an average particle size of around 20 nm which were used to produce a hybrid film with a polymer coating of dipentaerythritol hexaacrylate (DPHA). We obtained good dispersion of the nanoparticles in a mixed solvent of 48% 1-methoxy-2-propanol (MP), 32% 3-methoxy-3-methyl-1-butanol (MMB), and 20% methyl i-butyl ketone (MIBK). An ink of the polymer coating consisting of 68.7 wt% nanoparticles and 31.3 wt% DPHA with a polymerization initiator was prepared using this solvent mixture. The surface of the hybrid film showed low roughness and the nanoparticles formed a densely packed structure in the DPHA matrix. The resulting coating possessed excellent transparency and a high refractive index of 1.69.
Keywords: core-shell nanoparticles; cerium oxide; poly(vinylpyrrolidone); refractive index; dipentaerythritol hexaacrylate core-shell nanoparticles; cerium oxide; poly(vinylpyrrolidone); refractive index; dipentaerythritol hexaacrylate

Polymer coatings have attracted much attention for applications in optical devices, such as lenses and displays. For anti-reflective coating applications, coatings with irregular surfaces for scattering reflected light were investigated [1,2], where control of the refractive index of the coating decreased the intensity of reflected light [3,4,5]. Such coatings should possess a low refractive index, ideally with a value equal to the square root of the refractive index of the substrate [3], however, it is difficult to prepare lower refractive index coatings. In order to solve this problem, a method for producing multilayer coatings having low and high refractive indices has been investigated. The development of transparent films with a high refractive index is required for this structure.
Many research groups have presented methods for improving the properties of polymer coatings, such as modification of the organic materials used in the coatings to increase the refractive index [6,7]; and adding inorganic fillers into the polymer matrix to achieve UV-blocking properties [8,9], improve the mechanical and thermomechanical properties [10,11,12], improve antistatic performance [13], add a hydrophobic property on the surface [14], and increase the refractive index [15,16,17]. For industrial application of these technologies, such investigations should be carried out under the conditions used in industry. Considering the solvent for inks to prepare polymer coatings, methyl i-butyl ketone (MIBK) is widely used in industry due to advantages related to volatility, viscosity, and price. It is expected that coatings made from inks containing MIBK and/or other solvents possessing properties corresponding to those of MIBK could be easily applied in industry. Moreover, for the application of such coatings for flat panel displays, it is necessary to investigate the coatability of the ink on polyethylene terephthalate (PET) and triacetylcellulose (TAC) substrates. Therefore, we propose that investigating the development of high-refractive-index transparent coatings should also be carried out under industrially-relevant conditions.
We previously investigated the preparation of UV-blocking hybrid films containing core-shell ceria-poly(vinylpyrrolidone) (PVP) nanoparticles [9]. Cerium oxide possesses high ultraviolet absorbance [18] and a high refractive index [19,20]. Nanoparticles of cerium oxide have been prepared by several different synthesis methods [21,22,23,24,25,26]. We also previously reported the synthesis and characterization of core-shell ceria-PVP nanoparticles [23,24,25,27]. The core-shell ceria-PVP nanoparticles were obtained using the simple polyol method, which was only a reflux of polyethylene glycol solution with cerium nitrate and PVP [23,24,25]. We previously investigated the use of nanoparticles with an average grain size of 37 nm and pentaerythritol triacrylate as a monomer for hard coating materials for UV-blocking coatings. These nanoparticles are difficult to disperse in aprotic solvents, so 20% 3-methoxy-3-methyl-1-butanol (MMB) was mixed with MIBK to improve the dispersibility; we then prepared inks for preparing hybrid films containing 29.0 wt% nanoparticles and 71.0 wt% polymer matrix [9].
In this study, we investigated the preparation of hybrid films containing nanoparticles in order to produce a high-refractive-index material. The loading of the nanoparticles in hybrid films should be sufficiently high to increase the refractive index. In this study we increased the loading of the nanoparticles to 68.7 wt%. Since we have empirical knowledge that the polymer matrix of dipentaerythritol hexaacrylate (DPHA) is harder than pentaerythritol triacrylate, the DPHA was used as a monomer in the polymer matrix to maintain the hardness of the film with a high loading. We used nanoparticles with an average particle size of 21.1 nm. Figure 1 shows a schematic diagram of the core-shell ceria-PVP nanoparticles and a corresponding field emission scanning electron microscopy (FE-SEM) image. These particles were sufficiently small to maintain translucency of the hybrid films. In industry, such nanoparticles are supplied as slurries using 1-methoxy-2-propanol (MP) or water as the solvent. The nanoparticles did not disperse well in a solvent mixture of 20% MP/80% MIBK or 20% MMB/80% MIBK, unlike nanoparticles with an average grain size of 37 nm. Firstly, we investigated the preparation of well-dispersed nanoparticle dispersions using a solvent mixture including MIBK and subsequently prepared hybrid films to evaluate their optical properties.

Commercially available water-based slurries of core-shell ceria-PVP nanoparticles with an average particle size of 21.1 nm were provided by Hokko Chemical Industry (Tokyo, Japan), who synthesized the nanoparticles in accordance with our previous report [24]. The average particle size was confirmed by FE-SEM observations, using a JSM-6335FM microscope (JEOL; Tokyo, Japan). The water-based slurry was centrifuged at 18,000 rpm for 90 min to collect the nanoparticles using a Himac CR20GII (Hitachi; Tokyo, Japan) centrifugal separator. Candidate protic solvents for the coating inks are listed in Table 1, along with their viscosities, boiling points, and saturated vapor pressures. We mixed 0.1 g of the nanoparticle sediment with 2 mL of solvent (loading to a nanoparticle concentration around 25 g/L). The mixtures were sonicated at 600 W for 5 min using a UH-600S ultrasonic homogenizer (SMT; Tokyo, Japan). Next, the dispersions were left to stand for five days to test the stability. The state of the dispersion was classified by their dispersion behavior (no dispersion, white cloudy dispersion, yellowish cloudy dispersion, deep yellowish cloudy dispersion, slightly transparent dispersion, or transparent dispersion) and their precipitation behavior (no precipitation, slight precipitation, large amount of precipitation). The particle size distributions of the dispersions in the solvents were analyzed using an FPAR-1000I dynamic light scattering (DLS) analyzer (Otsuka Electronics; Osaka, Japan).

Figure 2 shows the preparation scheme for the nanoparticle/DPHA hybrid films. The water slurry was centrifuged, and the resulting sediment was dispersed in a solvent mixture of MP/EL or MP/MMB by sonication. The centrifuge/sonication process was repeated twice. The suspensions were filtered three times through polypropylene membrane filters with 5, 2, and 0.8 μm pore sizes (Roki Techno; Tokyo, Japan). DPHA as a precursor of the polymer film (57% triester; Shin-Nakamura Chemical, Wakayama, Japan) and 1-hydroxycyclohexyl phenyl ketone (HCPK) as a photopolymerization initiator (Ciba Specialty Chemicals; Basel, Switzerland) were dissolved in MIBK. Inks for making the films were prepared by mixing the nanoparticle suspensions, the DPHA/HCPK solution, and the MIBK. The weight ratio of nanoparticles:DPHA:HCPK was 46:20:1, and the concentrations of the solutes (DPHA and HCPK) and nanoparticles were 11.4 and 25.1 g/L, respectively. The concentration of nanoparticles was 68.7 wt% in the hybrid film when the solvent was evaporated completely. The volume ratios of MP:EL:MIBK and MP:MMB:MIBK were both 48:32:20. The inks were coated on polyethylene terephthalate (PET; Toray; Tokyo, Japan) and triacetylcellulose (TAC; Toray; Tokyo, Japan) substrates, using a K101 bar coater (RK Print Coat Instruments; Litlington, UK). The thickness of the films was controlled by the wire diameter of the bar (#2 with a 124 μm pitch). After coating, the substrates were irradiated for 8 min with UV light using a 1.5 kW mercury lamp equipped with an IR cut-off filter to polymerize the DPHA (Jatec; Tokyo, Japan).

The surfaces of the hybrid films were observed using FE-SEM. The haze value was measured using an NDH 5000 haze meter (Nippon Denshoku Industries; Tokyo, Japan), equipped with a white light emitting diode as the light source. Refractive indices of the hybrid films were measured using an M-2000 spectroscopic ellipsometry (J. A. Woollmam; Lincoln, NE, USA) over a wavelength range of 195–1680 nm and angles of incidence of 65°, 70°, and 75°. In the calculation of the refractive index, models of the dielectric function and the film thickness were adjusted to minimize the mean square errors of Δ (phase difference) and ψ (amplitude reflectance) between the model and measured data using the WVASE32 software supplied with the instrument.

3.1. Dispersibility of Core-Shell Ceria-PVP Nanoparticles in an MP/MIBK Solvent Mixture

3.3. Relationship between the Condition of Dispersant and the DLS Particle Size

As mentioned above, we conducted dispersibility tests, in which the ratios of MP, MMB, and EL solvent were adjusted, and then subsequently mixed with MIBK. Among these solvents, MP has a boiling point, viscosity, and saturated vapor pressure the closest to those of MIBK, as shown in Table 1. Since EL and MMB have higher boiling points and lower saturated vapor pressures than MIBK, it is considered that adding large amounts of these solvents would affect the drying process of the film. Therefore, we prepared well-dispersed MP/MMB and MP/EL dispersions at appropriate mixing rates, and subsequently added MIBK.
Table 4 shows the dispersion behaviors of the MP/MMB solvent mixtures. The 40% MP/60% MMB and 60% MP/40% MMB dispersions were slightly transparent, where a small amount of precipitate was observed after five days. Subsequently, MIBK was added to the 40% MP/60% MMB and 60% MP/40% MMB dispersions. Table 5 shows the dispersion behaviors of MP/MMB/MIBK solvent mixtures. The well-dispersed MP/MMB dispersions maintained their slightly transparent state when 20% MIBK was added, while higher concentrations resulted in poorly dispersed (cloudy white) suspensions.
Table 6 shows the dispersion behaviors of MP/EL solvent mixtures. The 40% MP/60% EL and 60% MP/40% EL mixtures resulted in slightly transparent dispersions without any precipitate visible after five days. Subsequently, MIBK was added to the MP/EL dispersions and the dispersion behaviors of the MP/EL/MIBK solvent mixtures are shown in Table 7. The well-dispersed MP/EL dispersions also maintained their slightly transparent condition for MIBK additions up to 20%.
In conclusion, we obtained four kinds of well-dispersed solvent mixtures containing MIBK. As mentioned above, it would be preferable to reduce the amounts of EL and MMB for the film coating process. We therefore used 48% MP/32% MMB/20% MIBK and 48% MP/32% EL/20% MIBK dispersions for preparing films.

We investigated the selection of appropriate solvents for the dispersion of core-shell ceria-PVP nanoparticles and the preparation of novel high refractive index hybrid films consisting of DPHA and nanoparticles. In the case of a single solvent, the nanoparticles dispersed well in EL and MMB where the dispersions were slightly transparent. We prepared good dispersions of the nanoparticles in solvent mixtures of 48% MP/32% MMB/20% MIBK and 48% MP/32% EL/20% MIBK. FE-SEM images of the surface of DPHA films prepared from inks containing 48% MP/32% MMB/20% MIBK showed low roughness and a densely packed nanoparticle structure in the DPHA matrix, whereas the DPHA film formed from the 48% MP/32% EL/20% MIBK ink shows high roughness and many pores. We propose that EL had low affinity for the PVP shell and DPHA, so EL molecules would be localized within the DPHA and nanoparticle matrix during evaporation. The resulting coating possessed excellent transparency and a high refractive index of 1.69.

The following are available online at www.mdpi.com/1996-1944/10/7/710/s1, Table S1: Dispersion conditions of the nanoparticles in aprotic solvents. 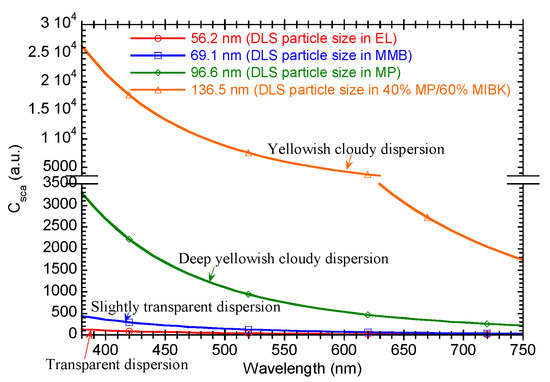 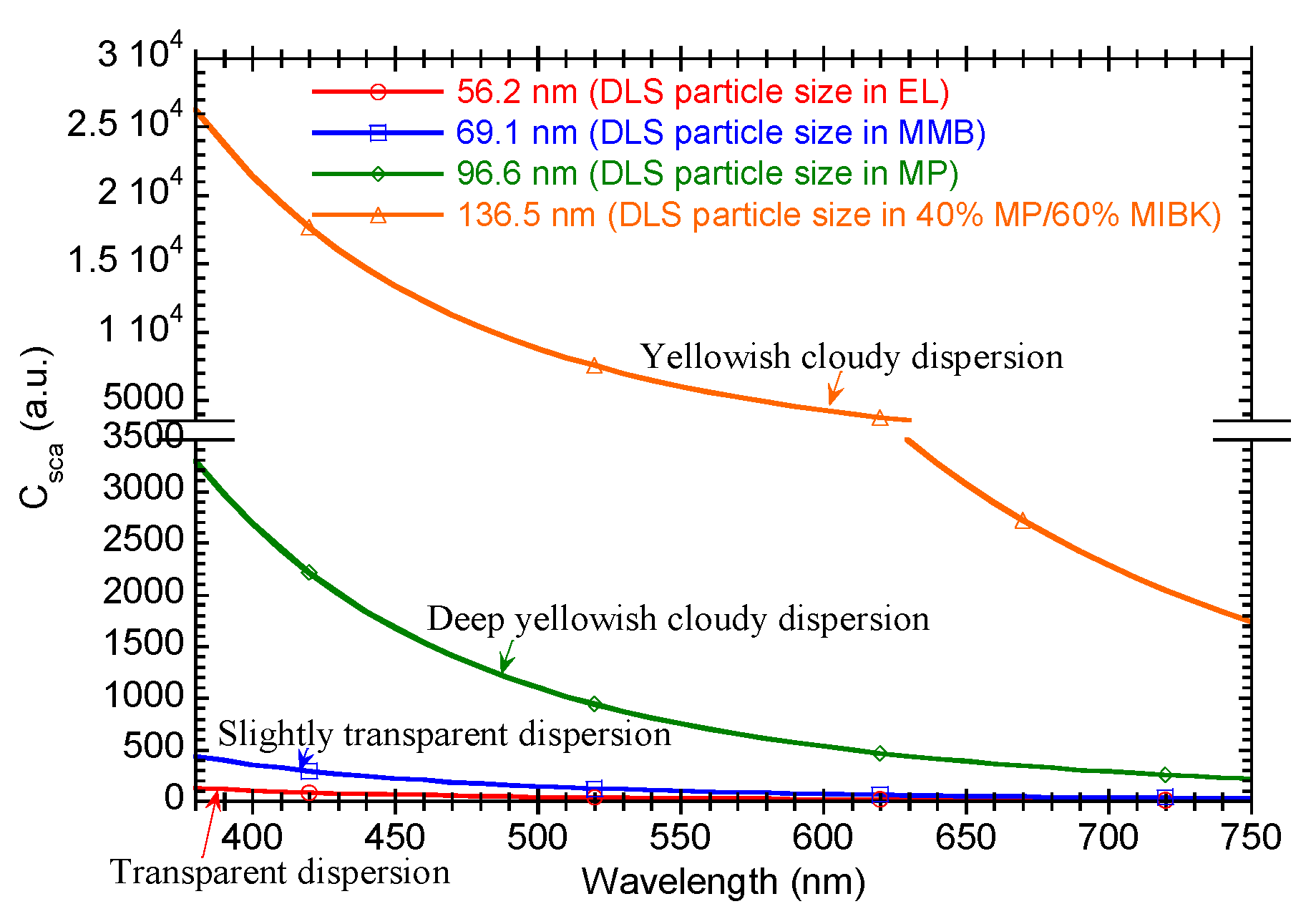 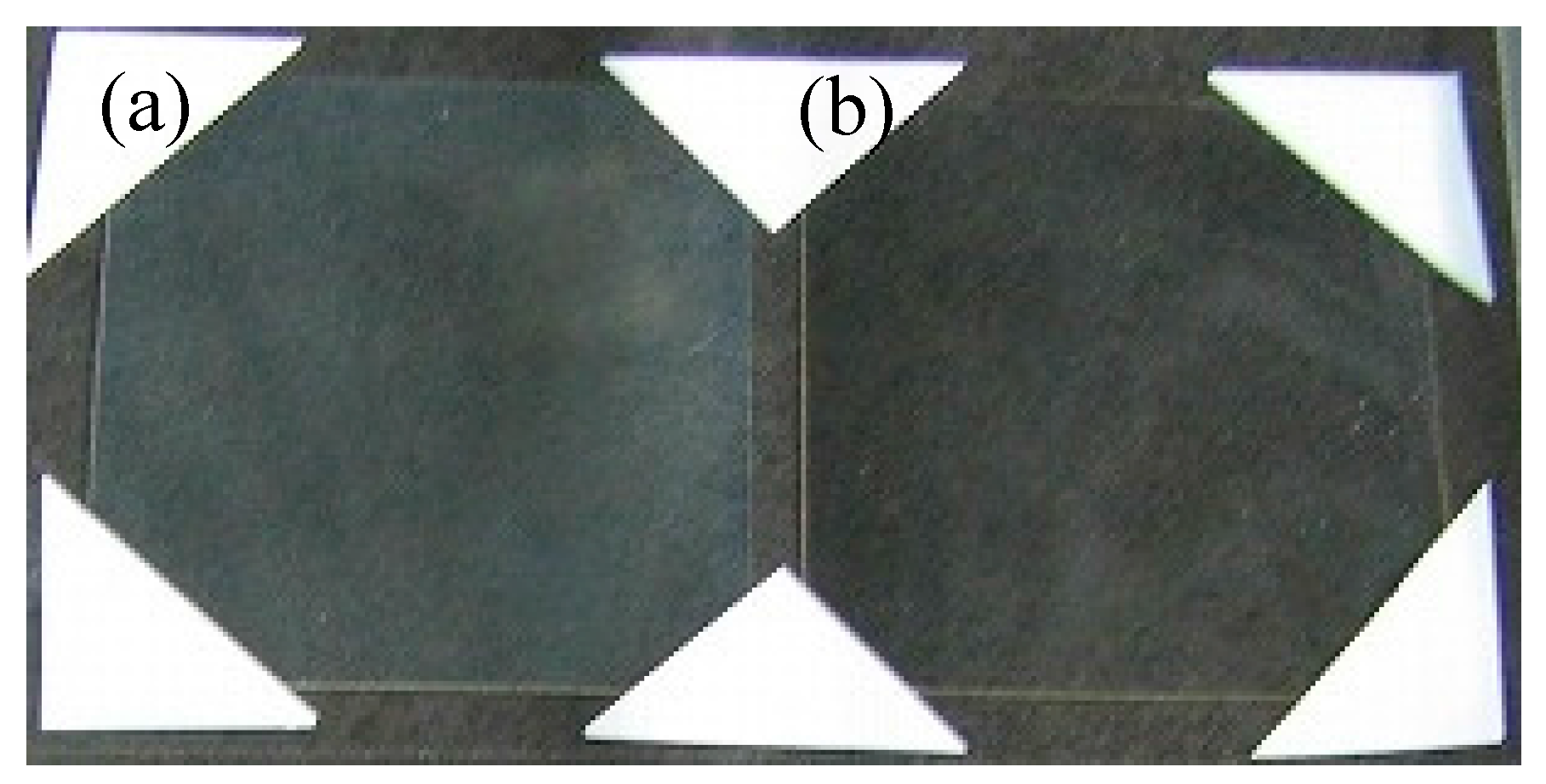