This work deals with the use of hydrotalcite nanoparticle post-diffusion in layer by layer (LbL) coatings with the aim of improving their flame retardant action on cotton. The selected LbL components, which encompass polydiallyldimethylammonium chloride and deoxyribonucleic acid, aim at the deposition of an intumescent coating. Infrared spectra pointed out a super-linear growth of the investigated assembly, indicating the ability to deposit thick coatings while maintaining a relatively low deposition number. A post-diffusion process, performed by exposing the LbL-treated fabrics to two different concentrations of hydrotalcite water suspensions (0.1 or 1 wt %), was carried out to improve the fireproofing efficiency of these coatings. Coatings treated with the lowest concentration suspension partially swelled as a consequence of their structural rearrangements while the use of the highest concentration led to nanoparticle aggregates. Horizontal flame spread tests were used for assessing the achieved flame retardant properties. The post-diffusion performed at the lowest hydrotalcite concentration lowers the minimum number of Bi-Layers required for obtaining cotton self-extinguishment while samples treated with the highest concentration showed detrimental effects on the performances of treated fabrics. This behavior is ascribed to the effects of hydrotalcite particles on the intumescence of LbL coatings, as evidenced by the morphological analyses of post-combustion residues. View Full-Text
Keywords: layer by layer; cotton; flame retardancy; combustion; hydrotalcite; nanoparticles layer by layer; cotton; flame retardancy; combustion; hydrotalcite; nanoparticles
►▼ Show Figures 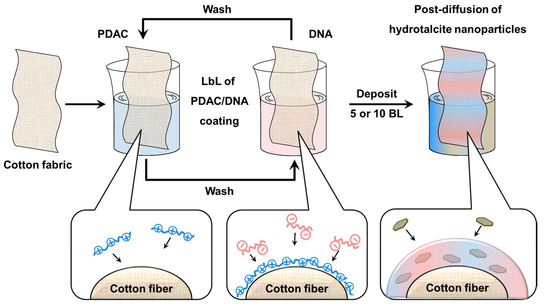