Effects of Cold-Rolling/Aging Treatments on the Shape Memory Properties of Ti49.3Ni50.7 Shape Memory Alloy
Next Article in Special Issue

Transparent Electrodes Based on Silver Nanowire Networks: From Physical Considerations towards Device Integration

Comparative Study on ZnO Monolayer Doped with Al, Ga and In Atoms as Transparent Electrodes

Transparent anodes are indispensable components for optoelectronic devices. Two-dimensional (2D) materials are attracting increasing research interest due to their unique properties and promising applications. In order to design novel transparent anodes, we investigated the electronic, optical, and electrical properties of 2D ZnO monolayers doped with Al, Ga, and In using the first-principles calculation in combination with the Boltzmann transport theory. When the doping concentration of Al, Ga, and In is less than 12.5 wt %, we find that the average transmittance reaches up to 99% in the visible and UV regions. Moreover, the electrical conductivity is enhanced for the Al, Ga, and In doped systems compared to that of the pristine ZnO monolayer. In particular, a good electrical conductivity with a significant improvement for the In doped ZnO monolayer is achieved compared to Al and Ga doping at the 6.25 wt % level. These results suggest that the ZnO monolayer based materials, and in particular the In doped ZnO monolayer, are promising transparent anodes for nanoscale electronic and optoelectronic applications.
Keywords: ZnO monolayer; electronic structure; optical properties; transport proprieties; First-principle ZnO monolayer; electronic structure; optical properties; transport proprieties; First-principle

Zinc oxide (ZnO) has emerged as a promising semiconductor material because of its particular electric and optical properties. It has a wide band gap (3.37 eV) at room temperature and a large excitation binding energy [1,2]. Such properties make it well suited for a variety of applications such as those in transparent electronics, ultraviolet (UV) light emitters, and piezoelectric devices [3,4,5]. Therefore, research on ZnO has become a hot topic in the optoelectronic fields.
The doping technique is an efficient approach for tuning the physical properties and improving the optical and electrical properties of the ZnO materials. Al doped ZnO has been extensively explored as transparent conducting films with high electrical conductivity [6]. Ng et al. [7] found a high resistivity and a significant transparency around 90% in the 370–800 nm wavelength range for Ga and Al doped ZnO by using the sol-gel spin coating technique. Hsu et al. [8] noted an increase in gap energy after doping with Ga and In, but a reduced band gap for Al doped ZnO compared to pristine ZnO. Meanwhile, Kuprenaite et al. [9] showed that doping ZnO with Al, In, and Ga enhances the transmittance of the materials and decreases their resistivity at low dopant concentrations. These results show that doping ZnO with group III elements makes it a good transparent conducting electrode for optoelectronic device applications.
Up to now, most of the existing research on group Ш element doped ZnO focused on bulk and thin films forms [10,11,12,13]. Recently, 2D materials are attracting increasing research interest due to their unique properties, such as the electron confinement of 2D materials without interlayer interactions, the maximum mechanical flexibility, high optical transparency, large lateral size, and ultrathin thickness. They have obtained large interest for potential applications in the fabrication of highly flexible and transparent optoelectronic devices [14]. To the best of our knowledge, there are few investigations on 2D ZnO monolayers doped with group Ш elements [15]. The discovery of 2D graphene has led to the intense interest in other potential 2D materials with novel properties [16]. As the allotrope of the superior bulk ZnO, the 2D ZnO sheet logically triggers scientists’ interest [17,18,19,20,21,22,23,24,25]. Freeman et al. [26] first theorized that free-standing thin films of wurtzite ZnO are less stable than a phase based on 2D ZnO. Tusche et al. [27] observed two-monolayer-thick ZnO (0001) films grown on Ag substrates through surface X-ray diffraction and scanning tunneling microscopy. Our research and previous studies show that the 2D ZnO monolayer exhibits distinct properties when compared with the bulk and film ZnO due to the quantum confinement effect [28]. Thus, it is desirable to explore the potential of group Ш element doped ZnO monolayers as novel transparent electrode materials and furthermore propose the choice of the dopant from these candidates to obtain a transparent conducting oxide (TCO) with good properties.
Good TCOs should have a large transmittance in the visible region and high electrical conductivity. Therefore, the present study is dedicated to investigating the electronic, optical, and electrical properties of group Ш element doped ZnO monolayers by means of the first principles calculation in combination with the Boltzmann transport equation. We have found that the average transmittance reaches up to 99% in the visible and UV regions when the Al, Ga, and In doping concentration is less than 12.5 wt %. Meanwhile, the electrical conductivity of In doped at 6.25 wt % concentration is larger than that of the Al and Ga doped ZnO monolayers. Our results may provide guidance for designing novel transparent electrodes based on ZnO monolayers.

All of the calculations were performed with the CASTEP code 8.0 and the ultrasoft pseudopotentials method, which were based on the density functional theory [29]. All of the structures were treated with periodic boundary conditions. The supercell was large enough to ensure a vacuum spacing greater than 15 Å. The exchange correlation functional was described by the generalized gradient approximation (GGA) in the form of Perdew-Burke-Ernzerhof (PBE) [30]. The structure optimization and the ground state calculations were performed with a cut-off energy of 400 eV for the basis set and a 4 × 4 × 1 Monkhorst-Pack grid for the Brillouin zone (BZ) sampling [31]. The convergence of the total energy was considered to be achieved when two iterated steps with an energy difference less than 10−6 eV occurred. The structural relaxation was performed until the forces on each atom were smaller than 0.02 eV Å−1.
The standard density functional theory (DFT ) underestimates the band gap of many transition metal oxides. Therefore, to obtain a more accurate representation of the electronic structure of ZnO, we adopt the DFT + Ud + Up method to investigate all of the structures, which was also used in our previous study [28]. The Ud value for Zn 3d and the Up value of O 2p were considered as 10 eV and 7 eV, respectively. The calculated band gap (3.37 eV) is in good agreement with the experimental measurements [5]. Meanwhile, the lattice parameters are a = 3.313 Å and c = 5.329 Å, which are close to the experimental values of a = 3.249 Å and c = 5.206 Å [32].
In order to describe all of the optical properties of the structures, the dielectric function is expressed as , which is mainly contributed from the electronic structures. and are the real part and the imaginary part of the dielectric function, respectively. is calculated as follows [33] where is the frequency of light, is the conduction band, is the valence band, is the first Brillouin Zone, is the reciprocal lattice vector, and is the dipole matrix.
is obtained from by using the Kramer-Kronig transformation [34].
The derivation of the absorption coefficient ( and the reflection coefficient ( based on the dispersion relations and transition probability can be described as follows [35,36,37]. where stands for the refractive index.
To calculate the electrical properties of the pristine and doped ZnO monolayer, the calculated band structure data from DFT is fitted into the Boltzmann package that is based on the semi-classic Boltzmann theory and the rigid band approach [38,39]. It follows from these approaches that the dependence of the conductivity on the transport distribution can be given by:
In the above relation, denotes the number of k-points that are sampled in the BZ and presents the band structure. The k-dependent transport tensor is read as:
In this equation, and stand for the band index and wave vector, respectively, denotes the relaxation time, is the component of the group velocities, and is the electron charge.
By integrating the transport distribution over the energy, the electrical conductivity can then be written as a function of the temperature, T, and the chemical potential, , via the following equations: where and stand for the tensor indices, and , , and denote the volume of the unit cell, Fermi level of the carriers, and the carrier Fermi-Dirac distribution function, respectively.
Due to the complexity of carrier scattering mechanisms in the solid, the exact solution of the Boltzmann equation cannot be obtained. For this reason, the relaxation time approximation is adopted to overcome such difficulty, where the relaxation time is treated as an energy-independent constant.

The optimized structure of Al, Ga, and In doped in ZnO monolayers is shown in Figure 1. The atomic structure of the 2D ZnO monolayer was cut from the initial bulk ZnO (0001) plane. We have a periodic 4 × 4 × 1 supercell of the ZnO monolayer, which consists of 32 atoms with one to three Zn atoms replaced by Al, Ga, and In atoms corresponding to 6.25, 12.5, and 18.75 wt % of group Ш elements in the ZnO monolayer. In order to understand the effect of the group Ш elements on the structure of the ZnO monolayer, we have listed the structural parameters with various concentrations after the structure optimization in Table 1. It can be seen that the average length of the bonds between the Al and Ga atoms and the nearest neighbor O atoms are slightly shorter than that of the ZnO bond length. However, the average bond length between the In atoms and the nearest neighbor O atoms is around 2.1 Å, which is longer than those of Zn–O (1.9 Å). The O–Al–O bond angle and O–Ga–O bond angle is approximately 119°, and it can be known that the Al and Ga doping causes little change in the bond angle. However, the O–In–O bond angle decreased more apparently than O–Zn–O bond angle. This is due to the large difference in the atomic radii of Al, Ga, and In. The radii of Al3+ (0.54 Å) and Ga3+ (0.62Å) are less than that of Zn2+ (0.74 Å) and the radius of In3+ (0.80 Å) is larger than that of Zn2+.

The authors acknowledge the support of the National Natural Science Foundation of China (Grant Nos. 51471064 and 51301054); the Program for New Century Excellent Talents (Grant No. 1253-NCET-009); and the Program for Youth Academic Backbone in Heilongjiang Provincial University (Grant No. 1251G022). 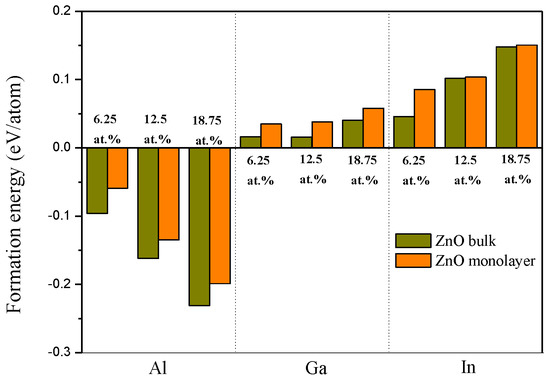