GaN thin films are promising candidates for many optoelectronic, high-temperature, and high-power applications [1]. GaN is almost commonly observed as the stable wurtzite 2H polytype (w-GaN), but can also crystallize in a metastable zinc-blende 3C structure (z-GaN) or the metastable (fcc) rock salt structure (c-GaN). Several physical and chemical technologies (e.g., molecular beam epitaxy or metal-organic chemical vapor deposition) are applied to synthesize GaN films. A general unsolved problem of the manufacturing of such films, which restricted the application of GaN films in optoelectronic and electronic devices, is the crystalline quality. Especially, the high concentration of background n-type carrier induced by lattice defects and the lack of the highly lattice-matched substrates commonly requires thick films up to 10 µm, because the defect concentration is reduced with increasing film thickness. Consequently, deposition technologies are wanted, which are capable to deposit thin GaN films with high crystalline quality.
Technologies which are based on the low-energy ion-solid surface interaction are of particular significance in many fields of thin film technology, including sputter deposition, smoothing, cleaning and etching, ion beam lithography, depth profiling and formation of nanostructures. The ability of low-energy ions (less than some keV) to influence the nucleation of thin films, crystallinity, morphology, and defect concentration, as well as the surface topography, can provide significant modification of the thin film properties [1].
In conjunction with conventional deposition techniques, low-energy ions can assist the modifying film structure and composition. The ion beam assisted deposition (IBAD) refers to all those using energetic ions to change the thin film properties and/or modify its structure during the deposition. Ion energy and flux, as well as the arrival rate of ions to deposited atoms (ion to atom ratio, I/A) are the crucial parameters to control the film structure and properties. In almost all experiments and ion beam technologies to fabricate thin films, ions with energy between 1 keV and 10 keV are utilized, although it is well-known that an increase of the ion energy leads to a significant increase of the defect concentration in the growing film. Consequently, a modern trend is to use so-called hyperthermal ions with kinetic energy smaller than 100 eV to modify the properties of thin films [2,3].
Here, a special variant of the IBAD technology, the ion beam assisted molecular beam epitaxy (IBA-MBE) is deployed to prepare thin GaN films with high crystalline quality. It could be demonstrated, that this method is very successful for direct growth (i.e., without buffer layer) of epitaxial GaN films [4]. In IBA-MBE, low energetic nitrogen ions (<100 eV) are delivered to the surface of the growing thin film during the deposition process. Subsequently, the surface mobility of the landing adatoms is enhanced and synthesis of GaN thin films with a low density of extended defects is possible. Since the overall quality of GaN thin films is strongly influenced at the initial stage of thin film formation, a detailed knowledge on the real structure of the GaN film/6H-SiC substrate interface and of the first few atomic layers is essential for optimization of deposition conditions and for identifying an application potential of IBA-MBE for GaN growth.
In this article, results are presented on the crystalline structure of two-dimensional (2D) and three-dimensional (3D) GaN films on 6H-SiC(0001) prepared by IBA-MBE with hyperthermal nitrogen ions, determined using reflection high-energy electron diffraction, X-ray diffraction, scanning tunnelling microscopy, and high-resolution transmission electron microscopy. The optimum conditions for epitaxial growth and high crystalline quality are discussed in terms of the nitrogen ion to gallium atom ratio and a mechanism of misfit accommodation at the GaN/6H-SiC interface are reported.

GaN thin films were grown by ion beam-assisted molecular beam epitaxy (IBA-MBE) consisting of three interconnected ultra-high vacuum chambers for film deposition including reflection of high-energy electron diffraction (RHEED) for in situ studies of film growth, for film analysis by Auger electron spectroscopy (AES) and low-energy electron diffraction (LEED) and for surface inspection by scanning tunneling microscopy (STM) [4]. The residual gas pressure prior deposition was 10−7 Pa. Ga was deposited by an effusion cell at temperatures between 950 °C and 1050 °C. In this temperature range the deposition rate ΦGa varied between 5 × 1013 and 2 × 1014 Ga atoms/cm² according to the calibration relation ΦGa = 8 × 107 × exp (TEC/71) obtained by Rutherford backscattering spectroscopy (TEC is the temperature of the effusion cell). A hollow-anode ion source, based on the principle of a constricted continuous current (DC) glow-discharge [19], was utilized to generate atomic nitrogen ions N+ and molecular ions N2+, where the ratio of N+/N2+ is roughly of order ¼. The maximum kinetic energy of these hyperthermal ions was 25 eV, and the nitrogen ion flux of 1.6 × 1014 ions/cm² was kept constant.
As substrate material, super-polished (0001)-oriented 6H-SiC was chosen as the most suitable material due to its small lattice mismatch of 3.5% and quite similar thermal and mechanical properties. The temperature of the substrate during deposition was kept constant at 700 °C. This temperature was found to be the optimal temperature for growing of dense GaN thin films with high crystalline quality [4].
The deposition process was monitored in situ by reflection high energy electron diffraction (RHEED) with an electron acceleration voltage of 30 kV. The electron beam was in the azimuth of hexagonal GaN and of the SiC substrate. The incidence angle of the electron beam with respect to the sample surface was ca. 2°.
The evaluation of the crystalline quality of the GaN thin films was performed by ex situ X-ray diffraction (XRD) for evaluating the average tilt and twist rotation angles of the crystallites by means of the rocking curve method. For the rocking curve (ω-scan) measurements a high-resolution diffractometer using a collimated and monochromatic Cu-Kα1 beam with a wavelength of 0.15406 nm was applied. The diffractometer with a four-axis goniometer allows tilt (polar angle χ, 0–88°) and rotation (azimuthal angle ϕ, 0–360°) of the sample with respect to the X-ray beam to align the sample accurately, as well as to perform texture goniometry measurements, where angular step widths of 1° in both χ and ϕ were adjusted. The rocking curve measurement (ϕ-scan) for the determination of the crystallite twist component was done with a high-resolution diffractometer equipped with an in-plane diffraction arm for in-plane measurements using a parallel beam. The in-plane ϕ-scans were performed at grazing incident beam of 0.25° to the sample surface (horizontal).
The surface topography was studied by in situ scanning tunnelling microscopy (STM) by movement of the samples from the preparation chamber into the STEM chamber without interruption of high vacuum.
The microstructure of deposited GaN films was studied by aberration-corrected scanning transmission electron microscopy (Cs-corrected STEM). For STEM investigations, cross-sectional TEM specimens were prepared by the focused ion beam (FIB) technique. The FIB lamellae were cut out using a Ga ion beam with beam energy of 30 keV and beam current of 4 nA. The lamellae were polished to electron transparency with a 5 keV Ga ion beam at a beam current of 50 pA. To reduce the TEM specimen thickness further and to improve the surface quality, the lamellae were processed with a focused argon ion beam in a NanoMill system. Ion energies from 900 eV down to 400 eV were used to remove implanted Ga ions and amorphous regions caused by the FIB process [20].
STEM work was performed with a probe Cs-corrected TEM (Titan cubed G2 60–300) operated at 300 kV. The Cs value was adjusted to be smaller than 200 nm. The C5 parameter was tuned by the manufacturer to be close to 400 µm. These microscope parameters were also used for the image simulations. Before STEM work, the TEM specimens were treated in a plasma cleaner for 10 min with a H2/O2 plasma recipe. All STEM images were slightly digitally filtered by a radial difference filter for noise reduction. Annular ranges of 79.5–200 mrad for the HAADF detector and 19–106 mrad for the low-angle ADF (LAADF) detector were applied. A probe forming aperture of 25 mrad was used in the HAADF and LAADF experiments. Image simulations were performed with the xHREM/xSTEM software package, based on the Fast Fourier Transform (FFT) multislice algorithm. The probe size was set to 0.07 nm which corresponds to the specified spatial resolution of the STEM instrument as identified from FFT image calculated from a high-resolution HAADF-STEM micrograph of GaN w-GaN .

Growth characteristics, microstructure, and defects of thin GaN films, which were directly deposited on 6H-SiC(0001) substrates by ion-beam assisted molecular beam epitaxy (IBA-MBE) using hyperthermal nitrogen ions, was studied. Combined in situ RHEED and in vacuo STM investigations revealed that the film growth mode can be controlled by varying the ion to atom ratio I/A. Accomplished 2D growth resulted in films characterized by a smooth topography, a high crystalline quality, low biaxial stress, and low defect density. As a consequence, coalescence thicknesses below 10 nm (~30 GaN monolayers) could be achieved.
The misfit accommodation mechanism and structural defects in epitaxial GaN thin films deposited by ion-beam assisted molecular-beam epitaxy on super-polished 6H-SiC (0001) substrates are also reported. The misfit strain is relieved by the generation of edge dislocations in the first and second monolayers of GaN thin films and of misfit interfacial dislocations between the GaN thin films and 6H-SiC substrates, suggesting two possible mechanisms of misfit strain accommodation. The dislocations are formed during initial stage of thin film growth by the formation of coherent GaN/SiC interface due to pseuodomorphic growth of GaN as a result of the high mobility of Ga and N species on the SiC surface. Threading dislocations having various nucleation sources are, in addition, found in the GaN thin films. Typical structural defects in the GaN thin films were identified as basal plane stacking faults, low angle grain boundaries forming between w-GaN and z-GaN and twin boundaries.
Thus, hyperthermal ion assistance during epitaxial growth can lead to thin GaN films of high quality.

The financial support of the European Union and the Free State of Saxony (LenA Project No. 100074065) and the Leipzig School of Natural Science BuildMoNa is gratefully acknowledged. 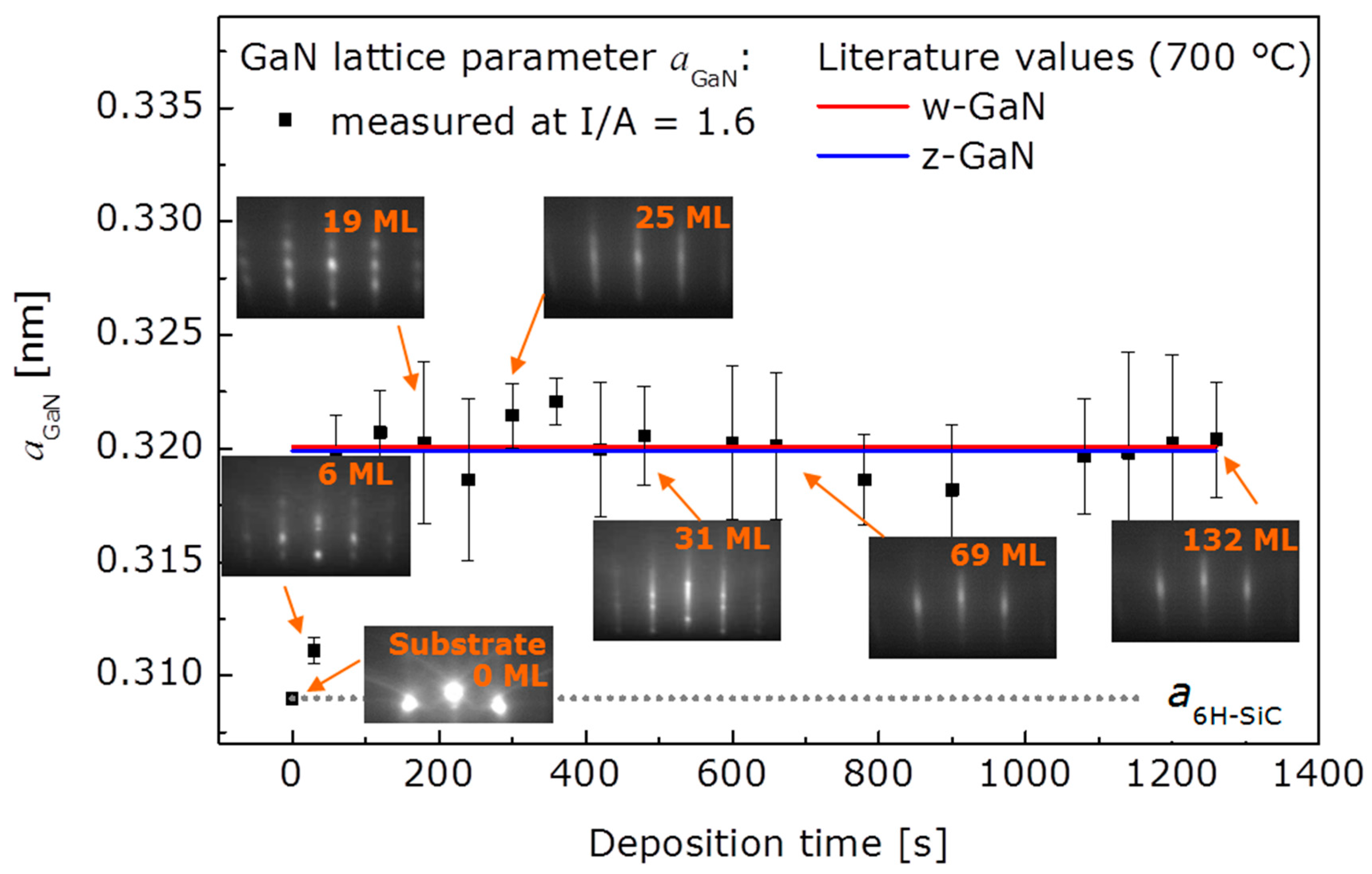 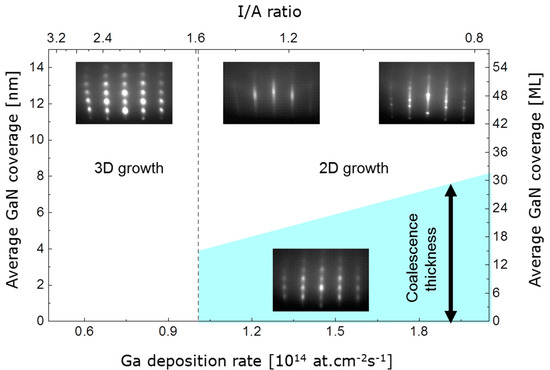 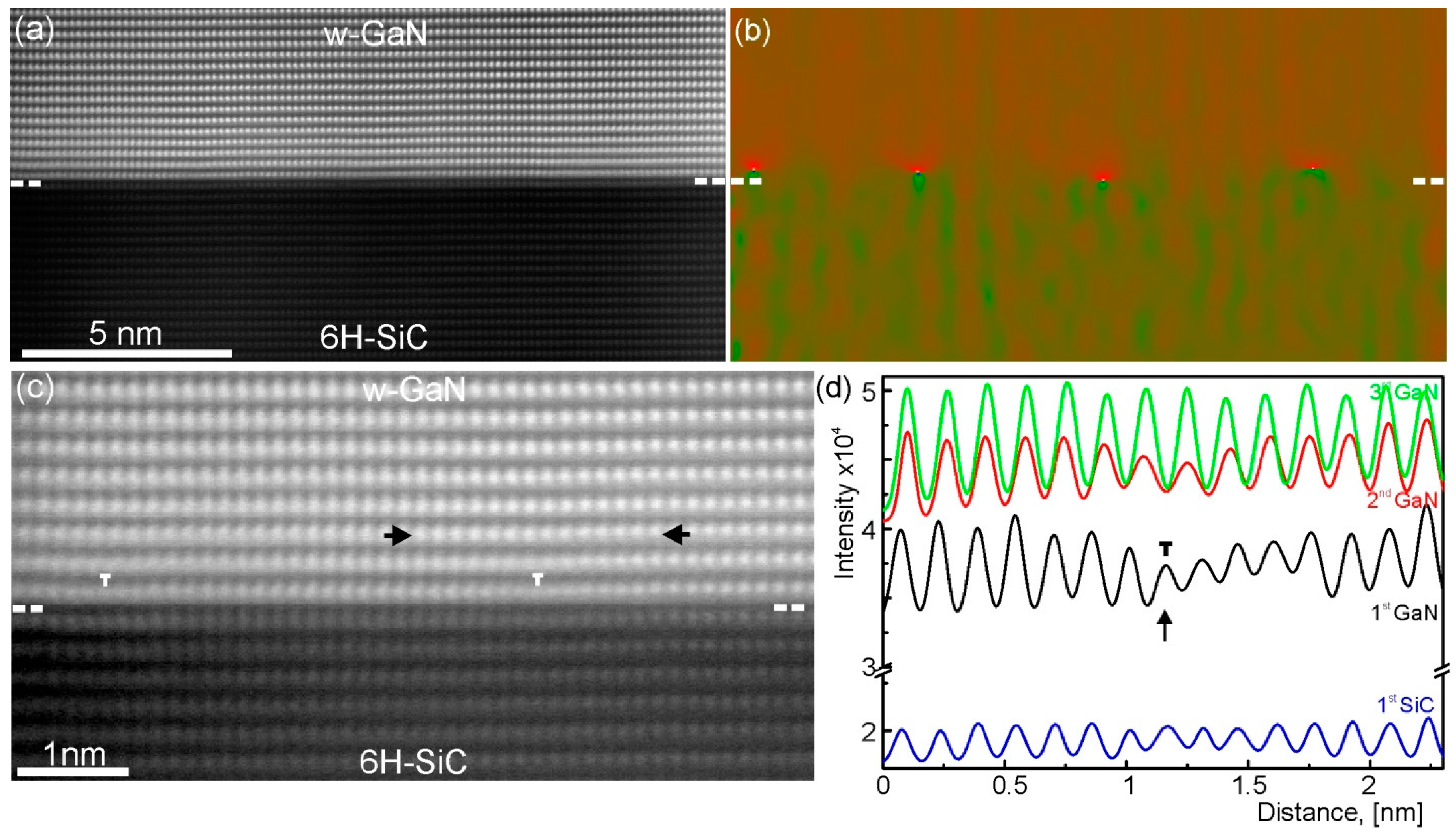 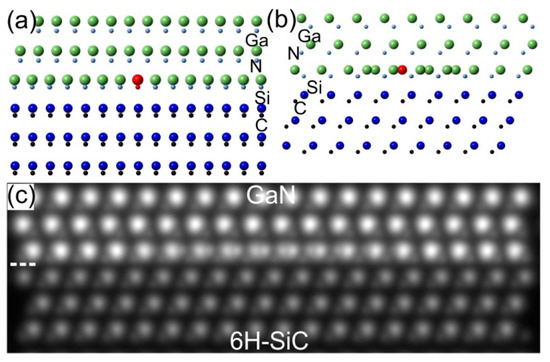 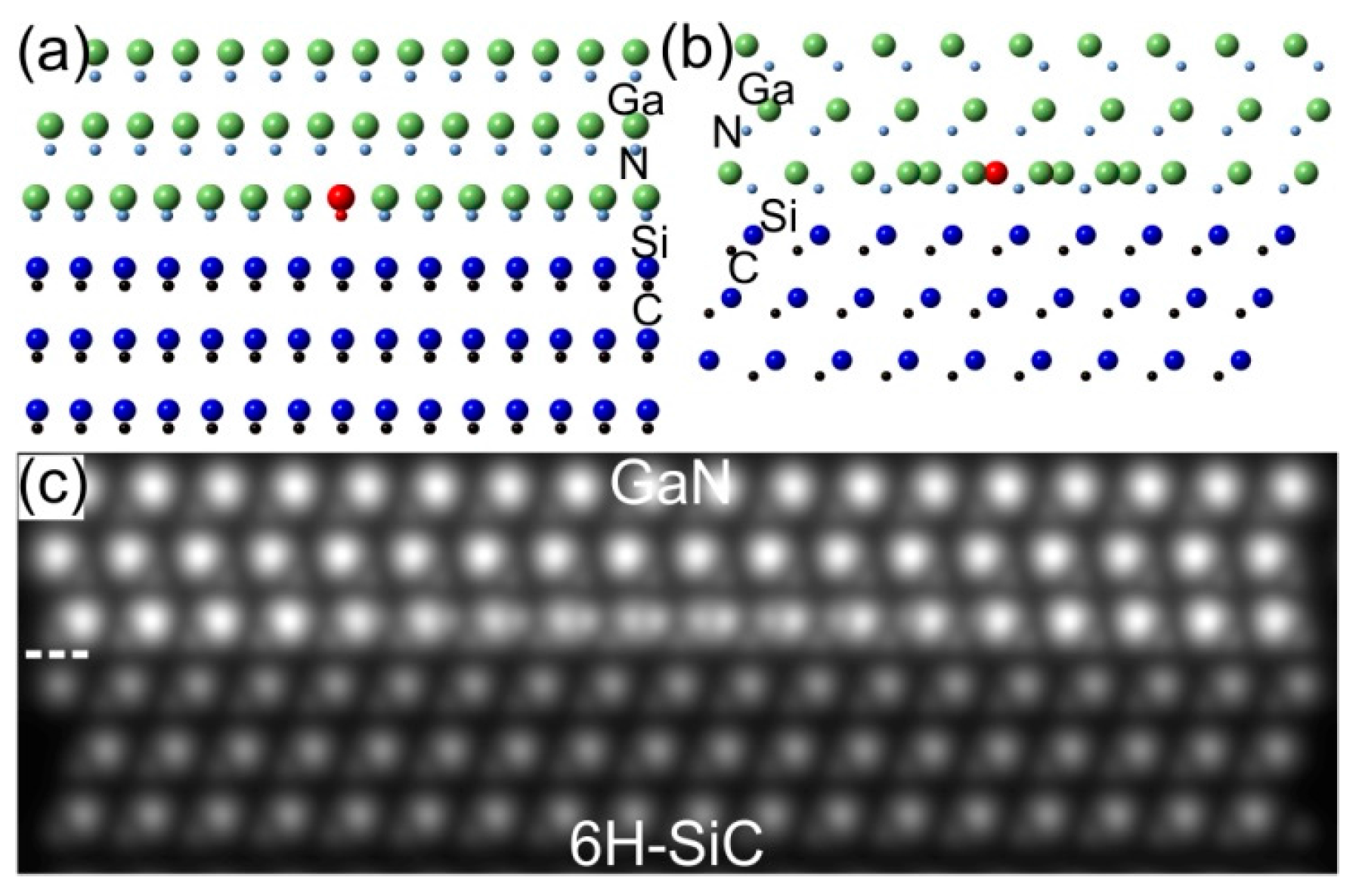 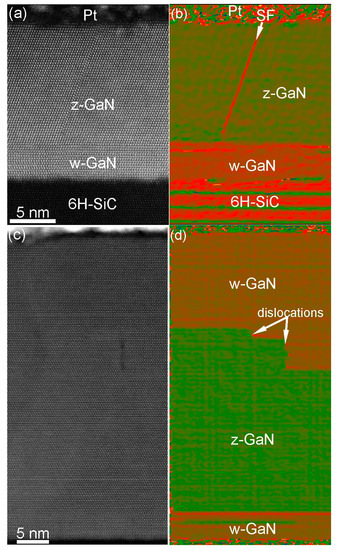 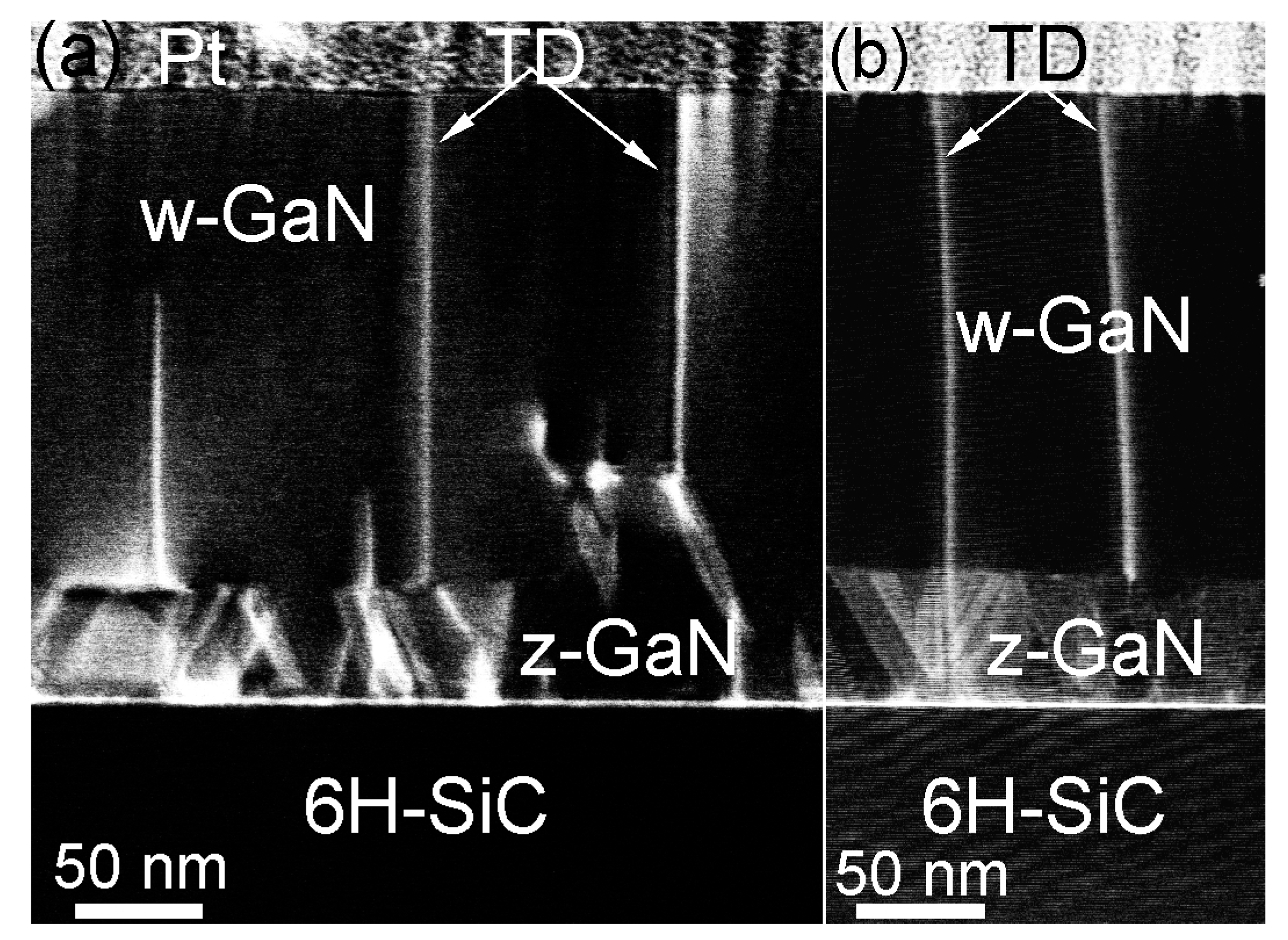