In recent years, the materials manufacturing industry has become more and more interested in aluminum alloys production, especially Al-Si alloys. This is due to the advanced properties of such alloys, such as high thermal and electrical conductivity, and relatively low density which is, only one third of that of steel [1]. Unfortunately, aluminum alloys still show relatively lower mechanical properties compared to those of iron-based alloys. Traditionally, strengthening of Al is achieved by an alloying process, involving the addition of different compounds that affect the metal structure formation and, as a result, influence its mechanical properties.
Al-Si hypoeutectic casting alloys are commonly used in automotive and aerospace industries due to their high strength at elevated temperatures. Therefore, investigation of these alloys’ mechanical properties is of great interest in the light alloy foundry industry. Mostly, the alloys’ strength improves by the alloying approach [2,3,4,5,6,7]. Such works also demonstrate the mechanical properties improvement using the ultrasound method, which affects the metal solidification process [8,9,10].
Over the last two decades, we have found that the improvement of metals’ mechanical properties can be achieved by a method that involves the addition of various nanomaterials into the melt. Several published works pointed out that the mechanical properties of A356 alloy can be improved by the addition of Al2O3, TiB2, TiC or WC nanoparticles during the casting process [11,12,13,14].
Vibration treatment is an additional approach which is widely applied during metal solidification to improve their macro- and microstructures and consequently their mechanical properties. The majority of these works explain the effect of vibration treatment and attribute it to the cavitation phenomenon [15,16]. Jian et al. described a significant refinement of the microstructure of aluminum A356 alloy by ultrasonic vibration [17]. Later, Gencalp and Saklakoglu illustrated the microstructural changes of Al A380 alloy as the result of the vibration frequency changing [18]. Identical microstructural behavior has been also described by Limmaneevichitr and co-workers. Here, more globular and finer microstructures of Al A356 alloy were obtained as the vibration increased [19]. The similar effect of obtaining small globular aluminum grains was also described in the investment casting of Al alloy by Barbosa and Puga [20].
In some works, we can even find the improvement of physical and mechanical properties simultaneously, e.g., Okayasu et al. showed the effect of ultrasonic vibration on Al casting alloys and pointed out that the electric conductivity was about 10% higher compared to wrought Al alloy, while at the same time the treatment improved the mechanical properties of the Al casting alloy [21].
The object of the current work is study of the vibration treatment, modification by ultrafine particles, and a combined treatment approach on the solidification effect and mechanical properties of Al-Si casting alloy. Through image analysis, macro- and microstructures will be investigated, as well as the mechanical properties of the obtained alloys. Additionally, X-ray diffraction (XRD) studies will be performed to reveal any changes in the phase composition of the alloy.

Commercial aluminum 356 casting alloy was used as the bulk material. The composition of the alloy is given in Table 1.
A 100 kg portion of ingots of 356 alloy was melted in an industrial electric resistance furnace and superheated up to 680 °C, and then subjected to the addition of commercial degassing compound Degasal T200 (Schaefer Chemiche Fabrik, Hennef (Sieg), Germany) to clean the melt from the oxides and hydrogen. After 10 min, the melt was poured into a cast iron permanent mold with an average diameter of 60 mm, a wall thickness of 5 mm, and a height of 150 mm. First, the mold was preheated up to 400 °C and then the melt was poured at 720 °C ± 5 °C. The pouring process was applied with various vibration frequencies, 100 Hz, 150 Hz, and 200 Hz, and with the same amplitude of 0.7 mm; the schematic illustration of the device shown in Figure 1. Additionally, the as-cast, untreated alloy was poured for comparison.
A combined treatment of the modification approach followed by the vibration treatment was made by a specially prepared homemade “Typhoon-Z” modifier, which is based on the mixture of ultrafine oxide powders in the size range of 3–5 μm; its composition is presented in Table 2.
0.1 wt % of the modifier was added into the melt and, after 10 min of holding, the melt was poured and subjected to the vibration treatment. For comparison reasons, a modified alloy which was not subjected to the vibration treatment was poured into the mold as well. Table 3 presents the samples under different conditions performed in the experimental research.
Microscopic examinations were carried out using an Olympus BX53MRF-S (Tokyo, Japan) optical microscope. All specimens were analyzed after etching by Keller-Wilcox’s reagent (3 mL HCl, 5 mL HNO3, 1 mL HF, and 190 mL H2O). For measuring the size of the α-Al grains and a percentage of the eutectic phase area, Clemex image analysis software (Longueuil, QC, Canada) was applied.
The mechanical properties were measured by a testing machine FP 100 (Heckert, Germany) according to the ASTM B 108-01. Comparisons were made between the as-cast alloy, the modified alloy by a homemade modifier, the alloy after vibration treatment, and the alloy after a combined treatment using vibration and modification. A schematic illustration of the specimen subjected to mechanical properties tests is shown in Figure 2.
Macrostructure and shrinkage defects were analyzed by the obtained solidified ingots. Each ingot was cut vertically in order to present the formation of the complete cast.
Phase analysis of the modified and unmodified alloys was identified by a Panalytical X’Pert Pro X-ray powder diffractometer (Panalytical, Almelo, The Netherlands) at 40 kV and 40 mA. The patterns were measured and recorded at the 2Θ range from 20° to 100° (step size/time per step: 0.02°/1 s).
The density of the aluminum alloys was determined by a hydrostatic weighing approach with the accuracy of 0.001 g/cm3. Crack- and cavity-free samples were weighed in air and in carbon tetrachloride (CCl4) by using analytical scales. The density of the alloys was calculated by the following equation: where

The effect of vibration, modification, and a combined treatment on aluminum casting 356 alloy structure and mechanical properties has been investigated. The following was concluded: 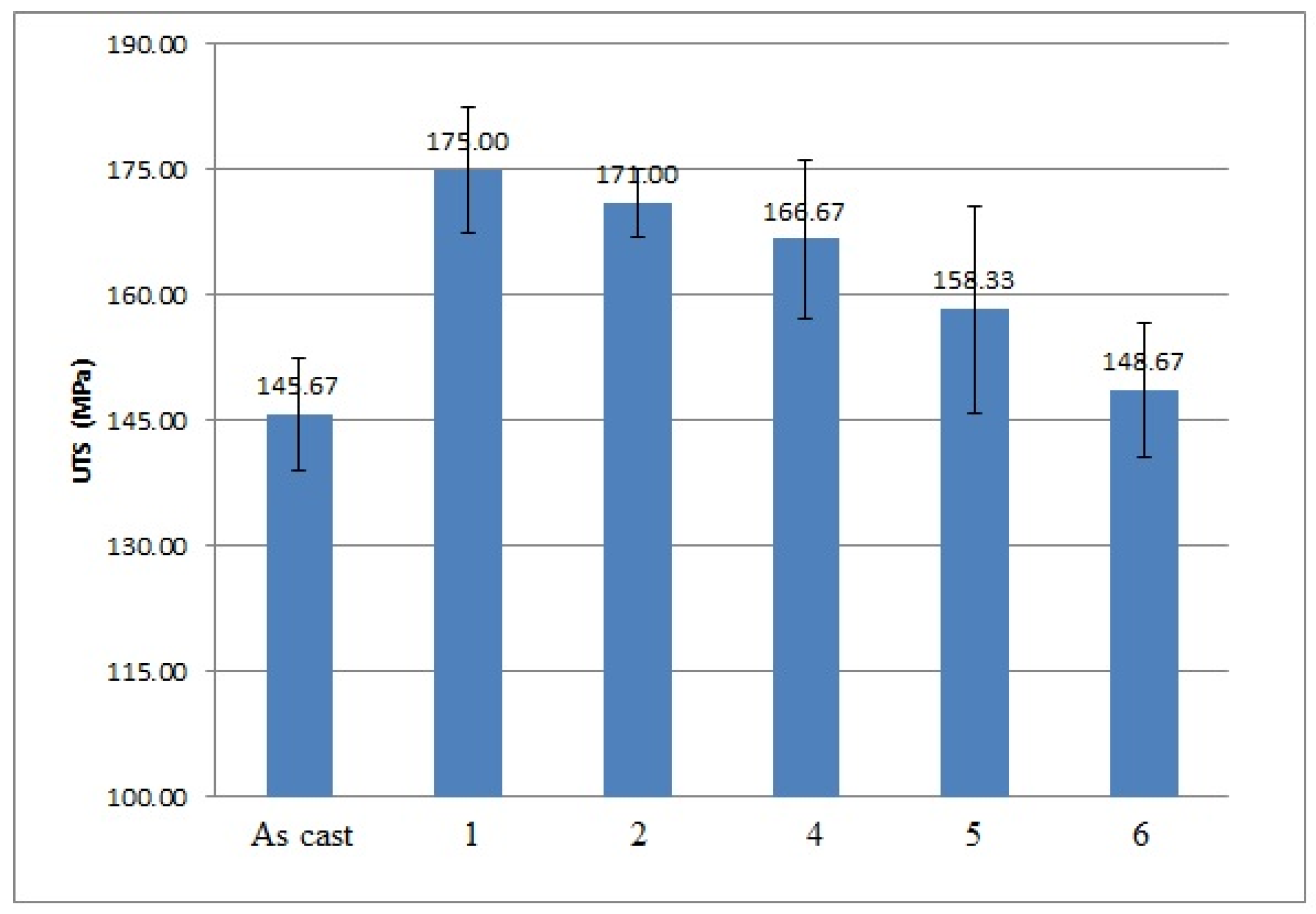 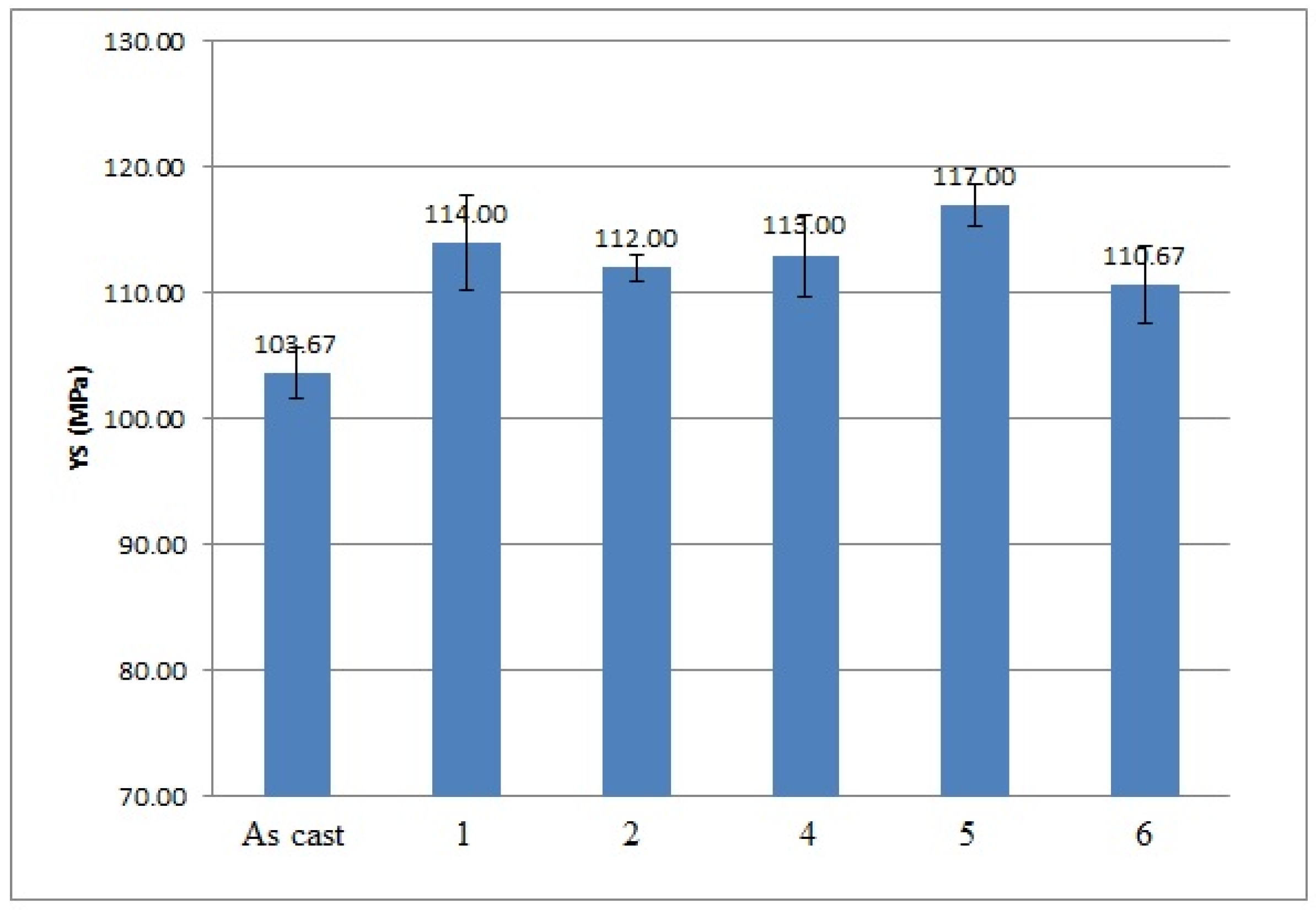 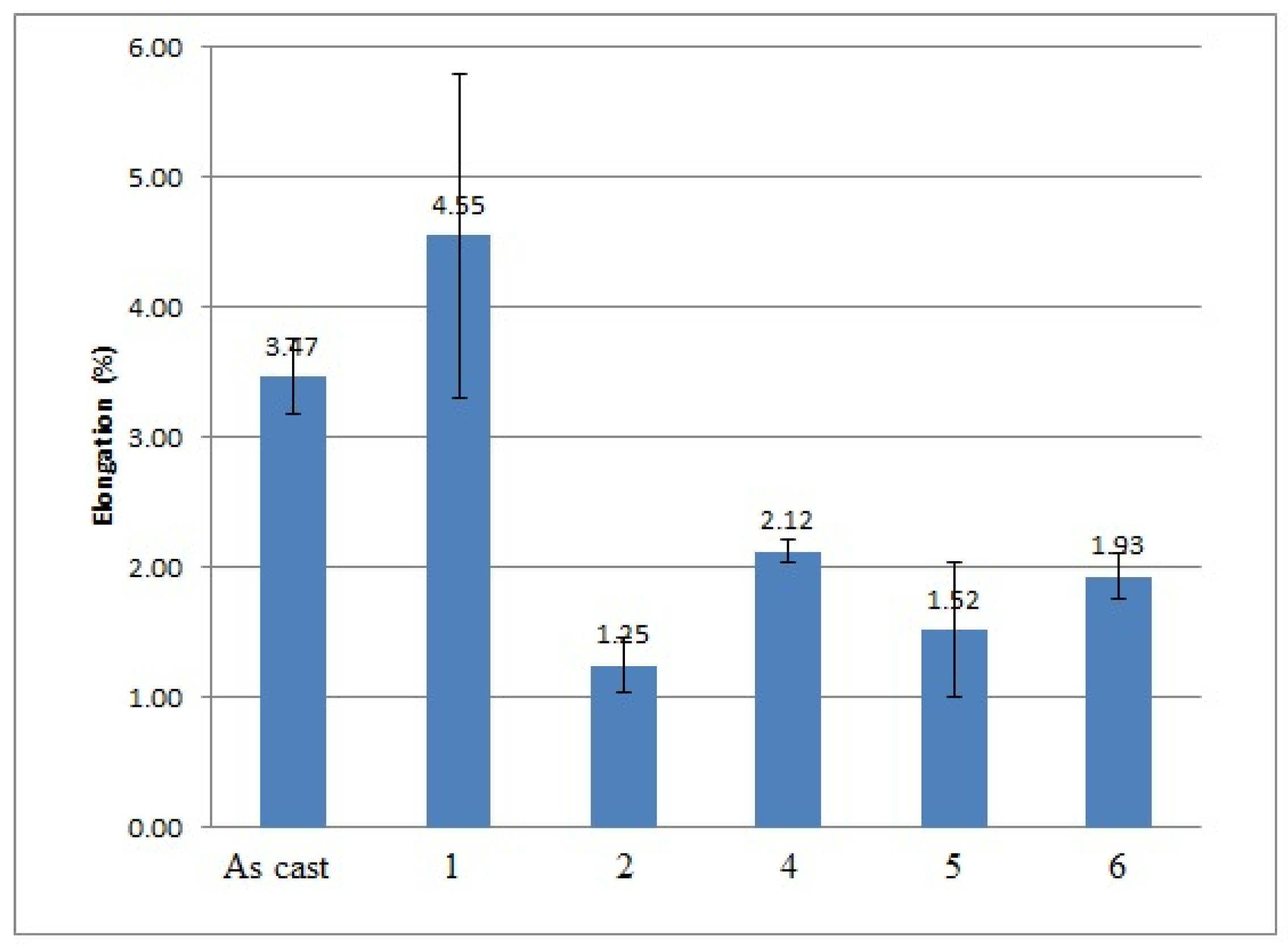 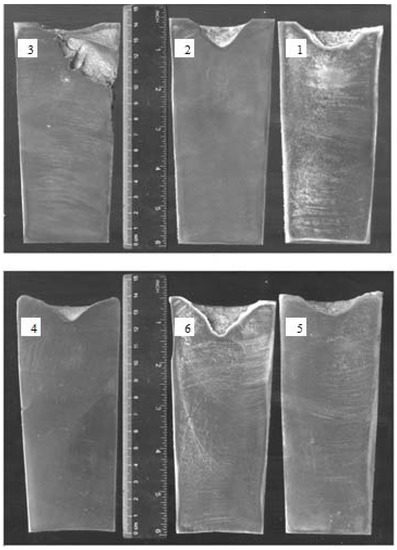 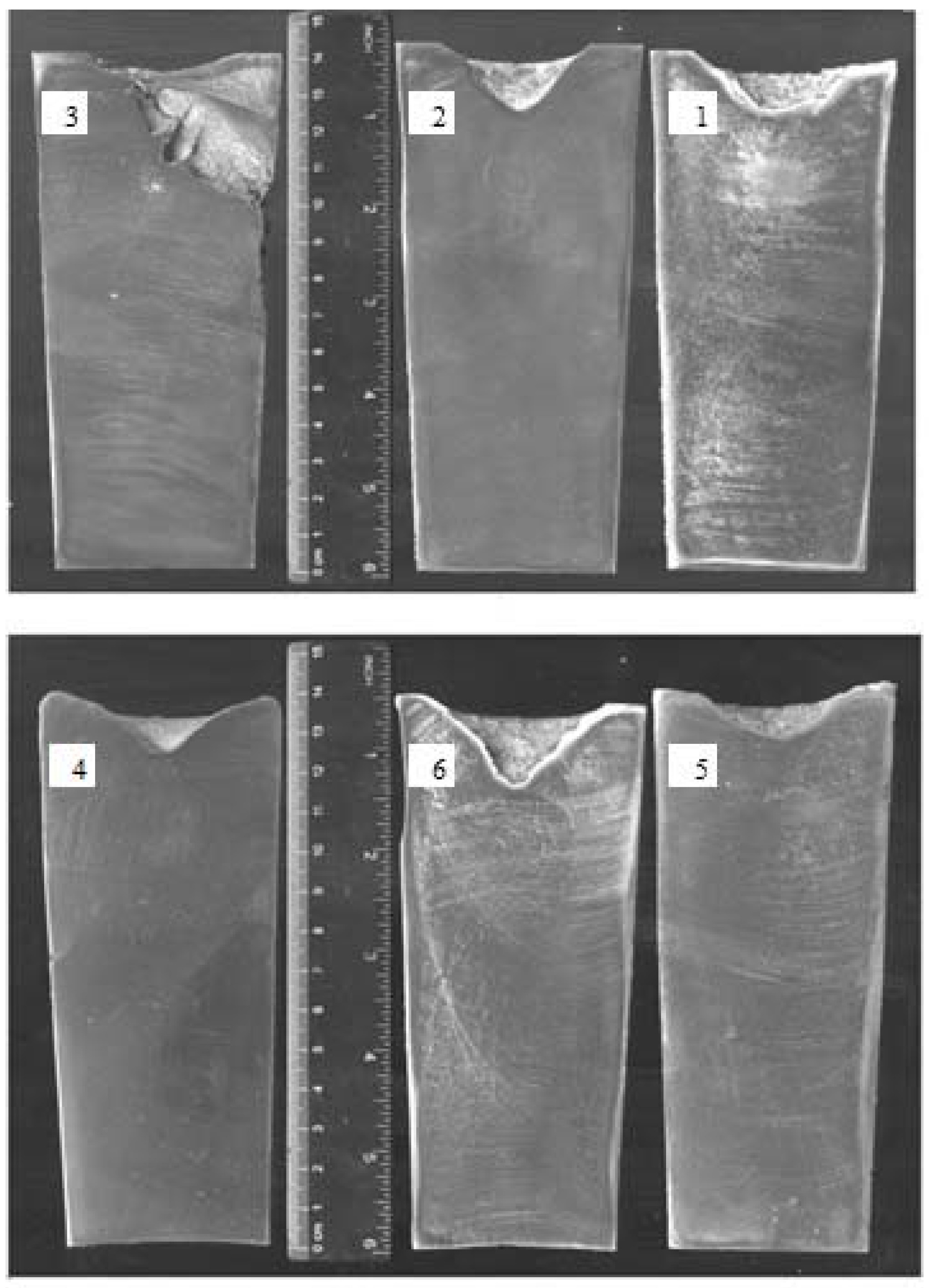 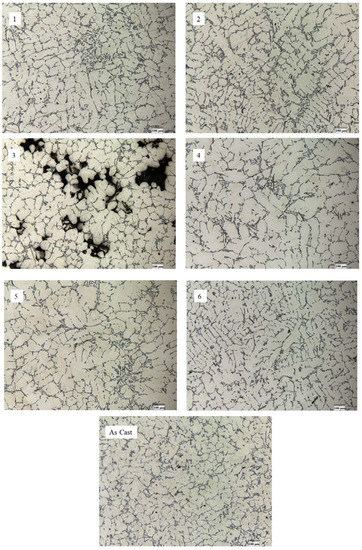 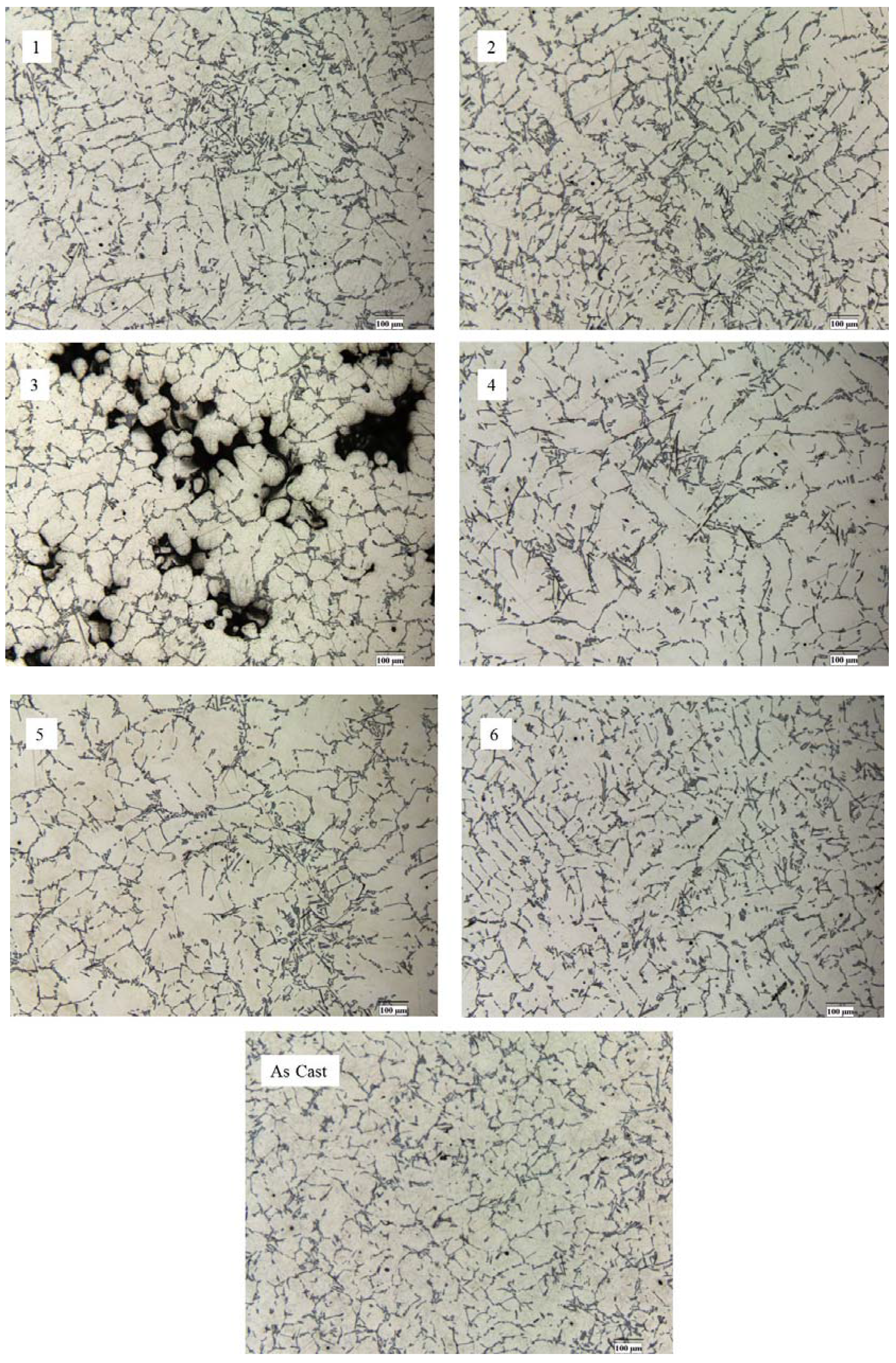 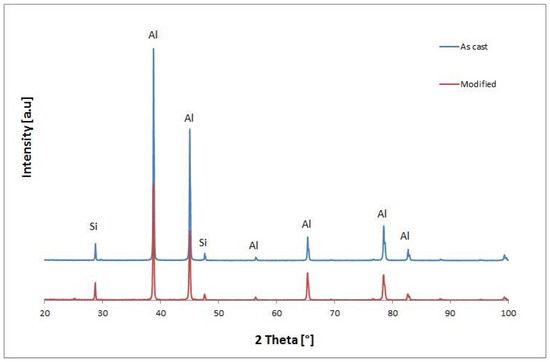