Metamorphosis in the Porosity of Recycled Concretes Through the Use of a Recycled Polyethylene Terephthalate (PET) Additive. Correlations between the Porous Network and Concrete Properties
Next Article in Special Issue

The mixed Co(II)/Ni(II) complex, [Co2.67Ni1.33L4(CH3COO)2][BPh4]2·0.75H2O where HL = 4-(salicylaldimine)antipyrine, was isolated as an orange solid from the reaction of 4-(salicylaldimine)antipyrine, with mixed cobalt(II) acetate and nickel(II) acetate in ethanol. The complex was characterized by Frustrated Total Internal Reflection (FTIR), UltraViolet Visible spectroscopy (UV-Vis), X-ray single crystal diffraction, and by elemental analysis. The complex is composed of two symmetry independent cationic units, A and B. The two units are essentially isostructural; nevertheless, small differences exist between them. The units contain four metal atoms, arranged at the corners of a distorted cubane-like core alternately with phenoxy oxygen of the Schiff base. The overall eight corners occupied by metal ions in the asymmetric unit are shared between cobalt and nickel in a 5.33:2.67 ratio. Each metal divalent cation binds three coordinated sites from the corresponding tridentate Schiff base ligand, the fourth one is bound by the acetate oxygen, the fifth and the sixth donor sites come from the phenolate oxygens of other Schiff base ligands. Intermolecular hydrogen bonds join the complexes to the water molecules present in the crystal packing. The magnetic characterization was carried out for this new complex and for its isostructural counterpart containing only cobalt ions. The magnetic measurements for the cobalt(II)/nickel(II) mixed compound indicate either antiferromagnetic interactions among the two cubanes or an anisotropic contribution, whereas a ferromagnetic interaction is observed within the cubane, for both the complexes, as expected by geometrical considerations. A comparison between the magnetic properties of the pure cobalt(II) derivative and similar systems discussed in literature, is presented. View Full-Text
Keywords: mixed Co/Ni; cubane; Schiff base; crystal structure; magnetic properties mixed Co/Ni; cubane; Schiff base; crystal structure; magnetic properties
►▼ Show Figures 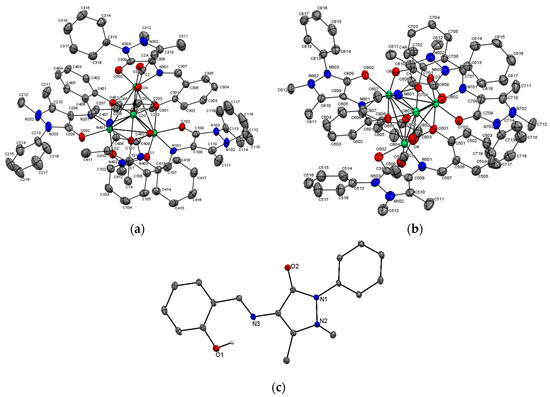