In this work, an accelerating etching method for glass named thermal electrical modified etching (TEM etching) is investigated. Based on the identification of the effect in anodic bonding, a novel method for glass structure micromachining is proposed using TEM etching. To validate the method, TEM-etched glasses are prepared and their morphology is tested, revealing the feasibility of the new method for micro/nano structure micromachining. Furthermore, two kinds of edge effect in the TEM and etching processes are analyzed. Additionally, a parameter study of TEM etching involving transferred charge, applied pressure, and etching roughness is conducted to evaluate this method. The study shows that TEM etching is a promising manufacture method for glass with low process temperature, three-dimensional self-control ability, and low equipment requirement.
Keywords: thermal electrical modification; accelerating etching; multi-scale structures; glass thermal electrical modification; accelerating etching; multi-scale structures; glass

Glass structures have been extensively studied in Biomedical microelectromechanical systems (Bio-MEMS) [1], optical devices [2], energy [3], and sensors [4] applications, such as capillary chip, fluid channel, diffraction gratings, anti-glare glass, and self-cleaning glass. These devices are often with features of micro/nano scale, high surface quality, and mass production. Therefore, highly accurate and cost-effective practical manufacturing methods are essential. Due to high chemical stability, the common structure micromachining methods for glass are limited to wet etching [5,6], dry etching [7], sandblast [8], laser [9], drilling [10], and imprint [11]. All of the methods (with their respective pros and cons as shown in Table 1) can be categorized as forming an accelerating etching rate in a particular area, which are further characterized as two standards: a. Mask patterning on glass, b. Etching faster.
By comprehensive consideration of resolution and surface quality, wet etching and imprint are the two most appropriate methods for glass micro/nano structure micromachining. Both have their advantages and disadvantages with respect to “mask patterning” and “etching”. Since chemical etching based on hydrogen fluoride (HF) solution needs only simple devices, and a high quality surface is easy to achieve [12], wet etching is still the common choice for glass structure micromachining. However, from the perspective of “mask patterning”, wet etching is remarkably restrained by the disadvantages of photolithography, such as wave diffraction, scattering, interference, and backscattering—especially for nano scale [13]. Currently, nano-photolithography also requires sophisticated equipment and a restricted manufacturing environment, limiting the extensive application in low-cost glass manufacturing. On the contrary, glass imprint effectively solves the problem of nano-photolithography by directly replicating mould onto glass. The process is fast and highly accurate [14]. Since the “etching” of the imprint is hot embossing, it involves the heating of the glass above its transition temperature (˃550 °C for borosilicate glass [15]) to squeeze into the mould cavity, and then releasing the glass from the mould after cooling down [16]. Obviously, the glass plastic deformation benefits the squeezing in high temperature, but it leads to higher demands for demoulding. The mould defects—such as rough sidewall, improper slanting angle, undercuts, and wavy textures—will all cause interlocking between the squeezed glass and the mould, resulting in undesired shear force during demoulding. In addition, high temperature strengthens the chemical bonding between the mould and the glass, which also introduces a destructive adhesion in the contact area [17]. Thus, resolving the contradiction between high temperature plastic deformation and low-damage anti-sticking demoulding has become an important challenge for glass imprint.
Herein, an interesting modification phenomenon on glass named thermal electrical modified etching (TEM etching) is reported, and it is utilized for glass structure micromachining. In the work, the basis phenomenon—initially found during anodic bonding—is featured with an accelerated chemical etching rate on glass. So, this phenomenon already meets the second standard mentioned above, which is “etching faster”. Furthermore, a novel strategy—referring to the fast, highly accurate “mask pattering” process of imprint—is introduced to extract the modified SiO2 from the anodic bonding joint onto the particular areas of the glass surface. Then, micro/nano structures are chemically etched by the difference of the etching rate. The new glass structure micromachining method has the advantages of both wet etching and imprint, while avoiding their disadvantages. It might be a promising solution for the aforementioned problems.

Compared with the cross-section of non-etching anodic bonding wafer shown in Figure 1a, a uniform gap appears along the Silicon/Glass joint after HF etching in Figure 1b. It can be inferred that a special layer of modified SiO2 once existed in the gap, which etches faster than the bulk Pyrex 7740 glass. It is confirmed in Figure 1c that the modified SiO2 belongs to the Pyrex 7740 glass at the Silicon/Glass joint. Moreover, another interesting phenomenon is demonstrated in Figure 1d—the modified SiO2 can be cured by post annealing, so the annealed bonding samples are without gap after HF etching.
To evaluate the influencing factors of the SiO2 modification, parameter studies involving voltage and temperature were conducted. Figure 2a shows that the etched gap increased with increasing applied voltage from 400 V to 1200 V under “current control mode”. However, keeping the charge constant (108 mA·s) while increasing the applied voltage, the width of etched gaps remained at almost 600 nm. The results reveal that the voltage is not directly related to the width variation, but it is actually the transfer charge that bridges the gap width and the voltage. Higher voltage results in more transfer charges, leading to the increment of gap width. The coefficient of the fitted curve for charge density (Qd) and gap width (W) is 3317 mA/mm2/nm in Figure 2b.
Secondly, the temperature influence on the gap width is plotted in Figure 3a. It seems that the temperature shares the same mechanism with the voltage by increasing the transfer charge. As shown in Figure 3b, however, the corresponding coefficient between charge density and gap width was 3937 mA·mm−2/nm, which is larger than that in Figure 2b. In addition, under “charge control mode” (red squares in Figure 3a, constant transfer charge of 72 mA·s), the width still increased with the bonding temperature. Therefore, it can be inferred that the temperature also affects the gap width in other ways besides the transfer charge.

3.2. A Novel Method for Micro/Nano Structure Micromachining by TEM Etching

According to the phenomena listed in Section 3.1, TEM SiO2 possesses three characteristics: (a) the modified depth is proportional to charge transfer; (b) the modified depth is proportional to bonding temperature; and (c) the modified SiO2 can be cured by thermal annealing.
Since different compositions in SiO2 seriously impacts the wet etching rate [24], and the charge transfer in TEM changes alkali (Na) distribution, it is reasonable to infer that the Na concentration may determine the SiO2 etching rate. However, by comparing TEM samples with and without post annealing shown in Figure 15, there is no significant re-doping phenomenon in the annealing samples, and both maintain a gradient of Na concentration. So, it is deduced that the etching rate acceleration in TEM does not depend on the Na compositions.
It is known that component change and thermal treatment might induce crystallization, and the crystallization leads to anisotropic etching. Therefore, 7740 glass, TEM glass, and TEM glass with post annealing were checked for crystallization using XRD. The results plotted in Figure 16 reveal that all of the samples are amorphous, which means that TEM and post annealing does not result in crystallization. Thus, the assumption that crystallization accelerates etching rate also does not hold.
Another supposed reason for TEM acceleration may originate from the stress. Stress-corrosion for glass has been verified, revealing that stress concentrators are responsible for a local corrosive acceleration [25]. For anodic bonding wafer, residual stress caused by differences of thermal expansion coefficient of Si/glass has been sufficiently studied. Both experimental results and FEM simulation show that the stress concentrates on the bonding interface [26]. Charge transfer is also proven to be a stress implantation process due to Na gradient [27] and ions replaced [28,29]. The stress induced by charge transfer locates in the sodium depletion layer near the bonding interface. Moreover, residual stress in anodic bonding can be cured by >500 °C [30], which is consistent with aforementioned “characteristic c”. Based on the above analysis, it is reasonable to assume that stress-corrosion may lead to TEM acceleration. Relevant experiment about stress assumption and more research will be carried out in future work.

This work was supported by China Aviation produce-learn-research projects (No. cxy2013XD31) and Major Science and Technology Projects of Fujian Province (No. 2015H6022). 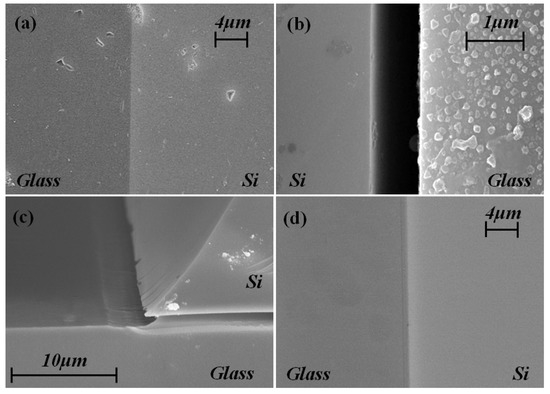 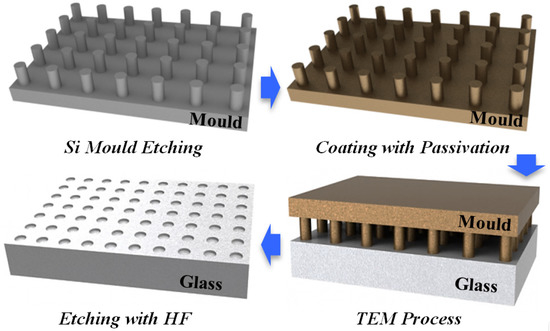 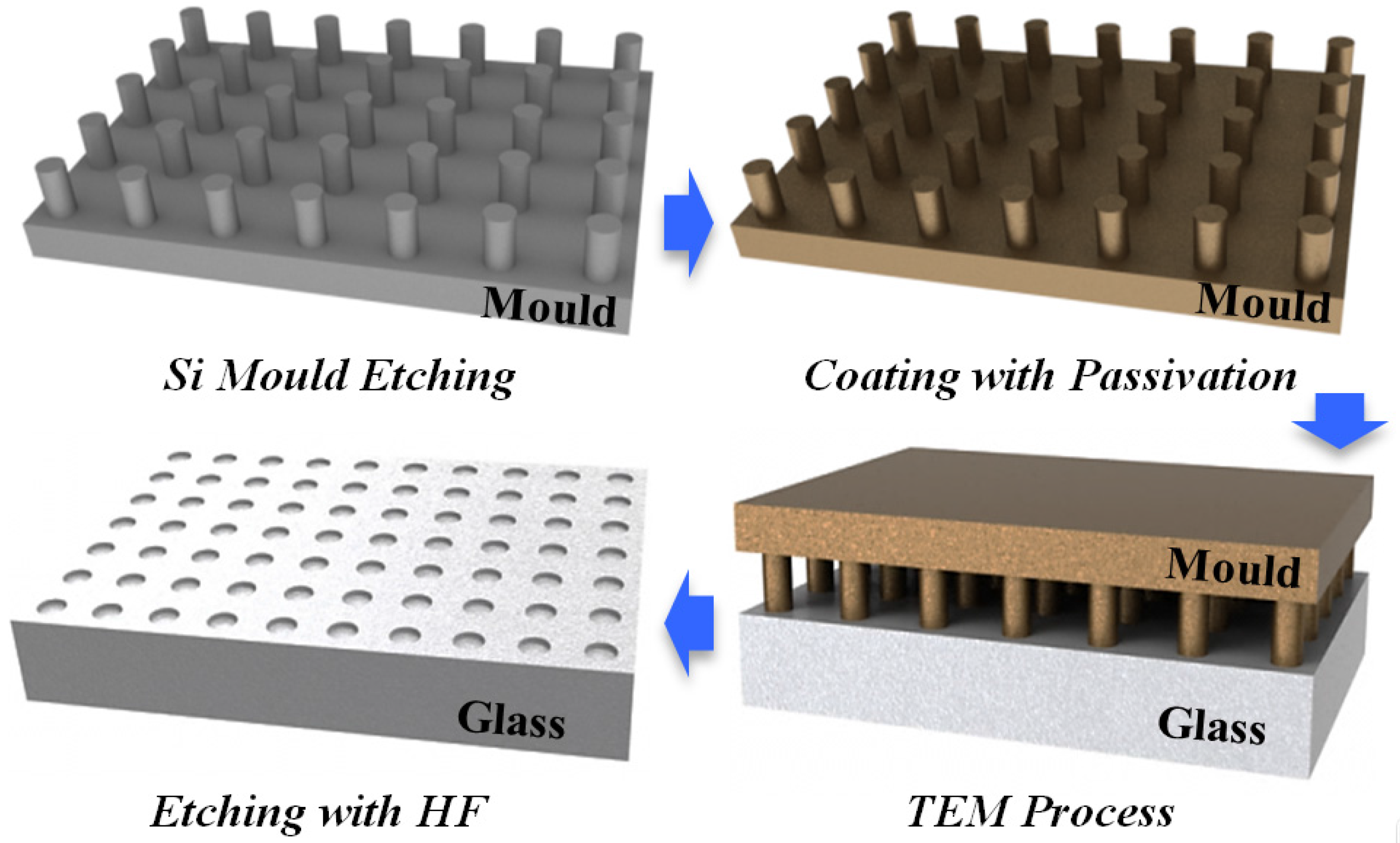 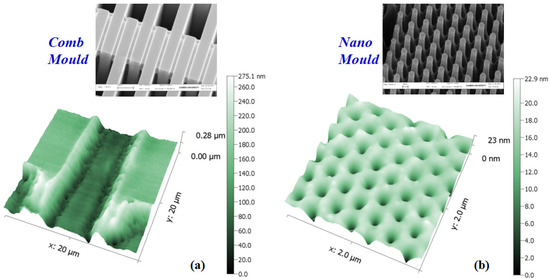 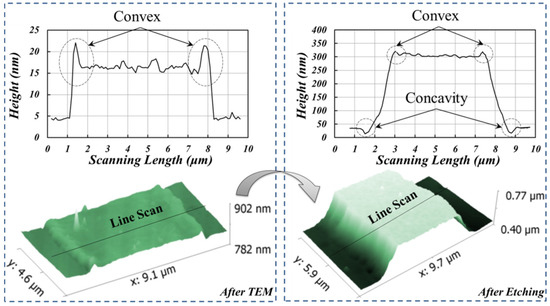 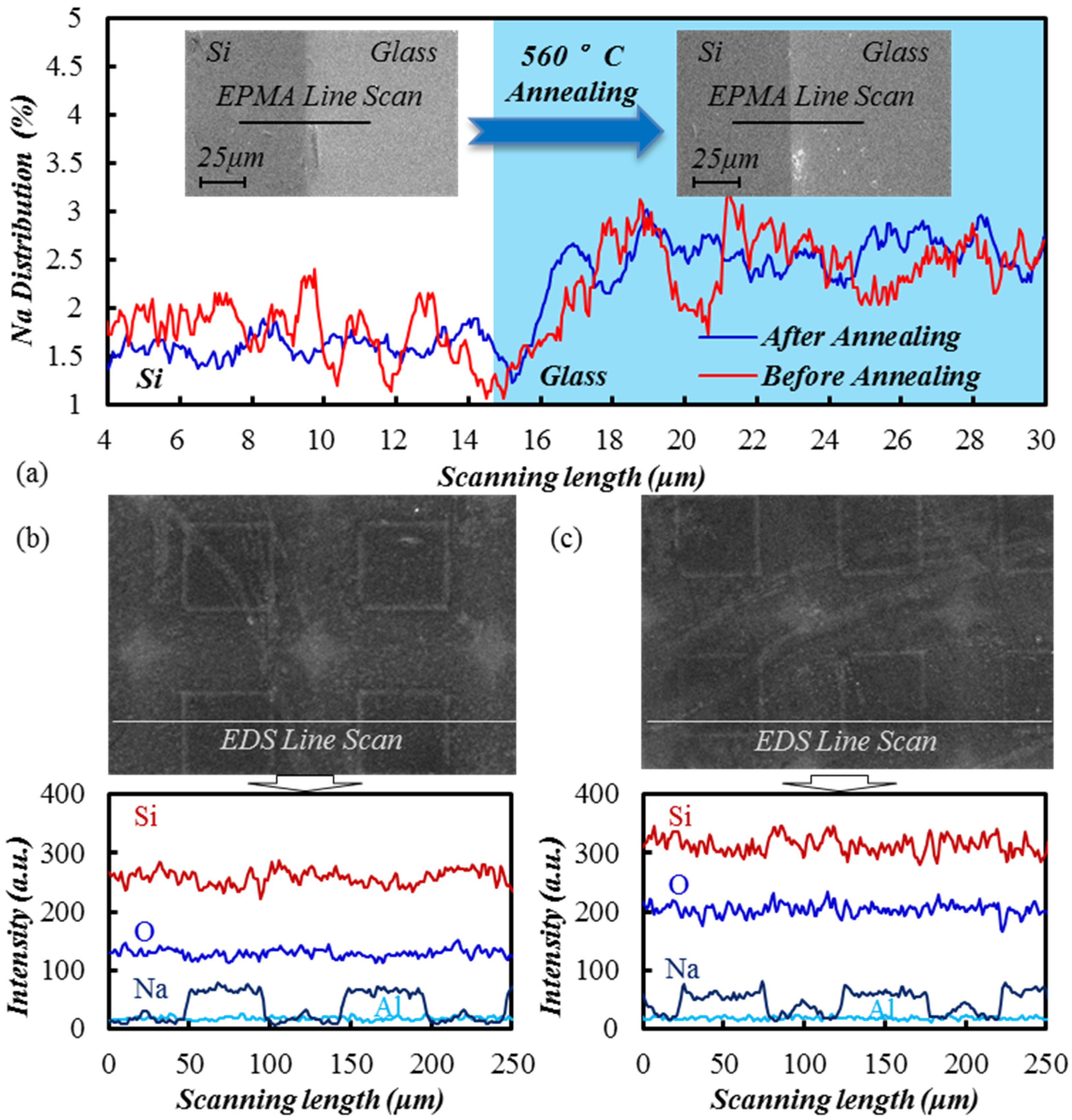 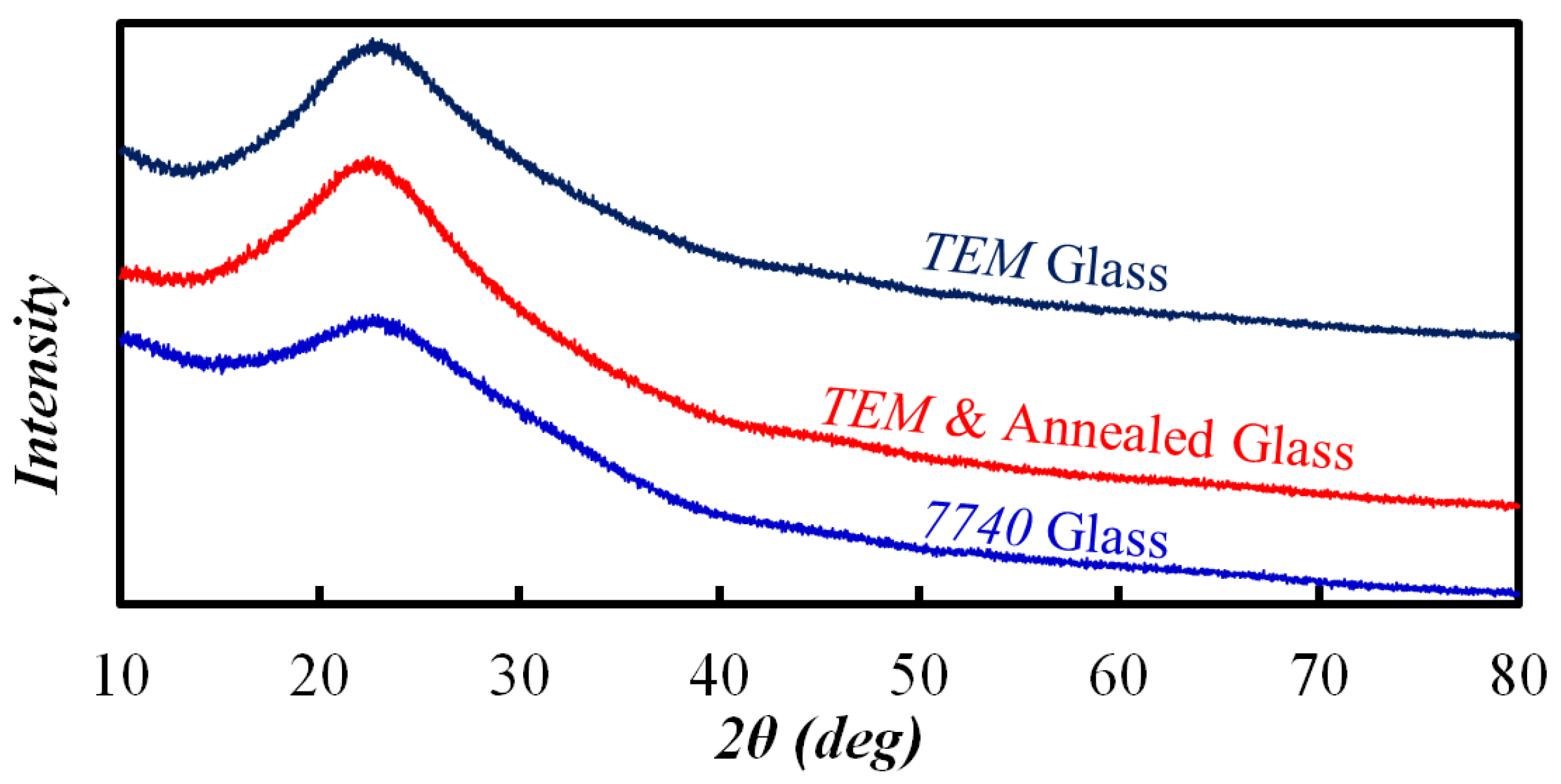