Properties of Residue from Olive Oil Extraction as a Raw Material for Sustainable Construction Materials. Part I: Physical Properties
Previous Article in Journal

Nanostructured hydrogenated carbon nitride (CNx:H) thin films were synthesized on a crystal silicon substrate at low deposition temperature by radio-frequency plasma-enhanced chemical vapor deposition (PECVD). Methane and nitrogen were the precursor gases used in this deposition process. The effects of N2 to the total gas flow rate ratio on the formation of CNx:H nanostructures were investigated. Field-emission scanning electron microscopy (FESEM), Auger electron spectroscopy (AES), Raman scattering, and Fourier transform of infrared spectroscopies (FTIR) were used to characterize the films. The atomic nitrogen to carbon ratio and sp2 bonds in the film structure showed a strong influence on its growth rate, and its overall structure is strongly influenced by even small changes in the N2:(N2 + CH4) ratio. The formation of fibrous CNx:H nanorod structures occurs at ratios of 0.7 and 0.75, which also shows improved surface hydrophobic characteristic. Analysis showed that significant presence of isonitrile bonds in a more ordered film structure were important criteria contributing to the formation of vertically-aligned nanorods. The hydrophobicity of the CNx:H surface improved with the enhancement in the vertical alignment and uniformity in the distribution of the fibrous nanorod structures. View Full-Text
Keywords: chemical vapor deposition; carbon nitride; nanostructures; hydrophobic chemical vapor deposition; carbon nitride; nanostructures; hydrophobic
►▼ Show Figures 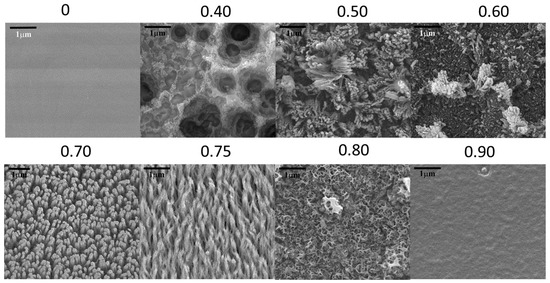