On the Piezoelectric Detection of Guided Ultrasonic Waves

In order to quantify the wave motion of guided ultrasonic waves, the characteristics of piezoelectric detectors, or ultrasonic transducers and acoustic emission sensors, have been evaluated systematically. Such guided waves are widely used in structural health monitoring and nondestructive evaluation, but methods of calibrating piezoelectric detectors have been inadequate. This study relied on laser interferometry for the base displacement measurement of bar waves, from which eight different guided wave test set-ups are developed with known wave motion using piezoelectric transmitters. Both plates and bars of 12.7 and 6.4 mm thickness were used as wave propagation media. The upper frequency limit was 2 MHz. Output of guided wave detectors were obtained on the test set-ups and their receiving sensitivities were characterized and averaged. While each sensitivity spectrum was noisy for a detector, the averaged spectrum showed a good convergence to a unique receiving sensitivity. Twelve detectors were evaluated and their sensitivity spectra determined in absolute units. Generally, these showed rapidly dropping sensitivity with increasing frequency due to waveform cancellation on their sensing areas. This effect contributed to vastly different sensitivities to guided wave and to normally incident wave for each one of the 12 detectors tested. Various other effects are discussed and recommendations on methods of implementing the approach developed are provided. View Full-Text
Keywords: guided ultrasonic waves; detector calibration; receiving sensitivity; Lamb waves; acoustic emission guided ultrasonic waves; detector calibration; receiving sensitivity; Lamb waves; acoustic emission
►▼ Show Figures 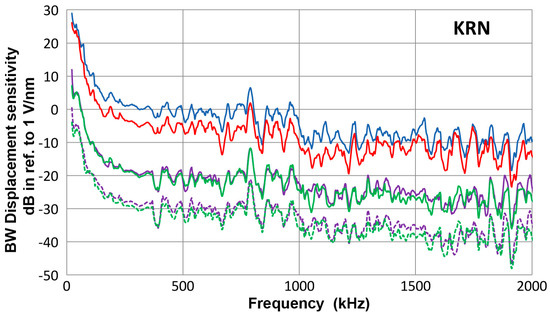