Cellulose nanocrystals (CNCs) were isolated from corn stalk using sulfuric acid hydrolysis, and their morphology, chemical structure, and thermal stability properties were characterized. The CNCs had an average length of 120.2 ± 61.3 nm and diameter of 6.4 ± 3.1 nm (L/D = 18.7). The degree of crystallinity of the CNCs increased to 69.20% from the 33.20% crystallinity of raw corn stalk fiber, while the chemical structure was well kept after sulfuric acid hydrolysis. Thermal stability analysis showed that the degradation temperature of the CNCs reached 239.5 °C, which was higher than that of the raw fiber but lower than that of the extracted cellulose. The average activation energy values for the CNCs, evaluated using the Friedman, Flynn-Wall-Ozawa (F-W-O) and Coats-Redfern methods, were 312.6, 302.8, and 309 kJ·mol−1 in the conversion range of 0.1 to 0.8. The isolated CNCs had higher values of activation energy than did the purified cellulose, which was attributed to the stronger hydrogen bonds present in the crystalline domains of CNCs than in those of cellulose. These findings can help better understand the thermal properties of polymer/CNC composites. View Full-Text
Keywords: corn stalk; fiber; cellulose nanocrystal; thermal properties; activation energy corn stalk; fiber; cellulose nanocrystal; thermal properties; activation energy
►▼ Show Figures 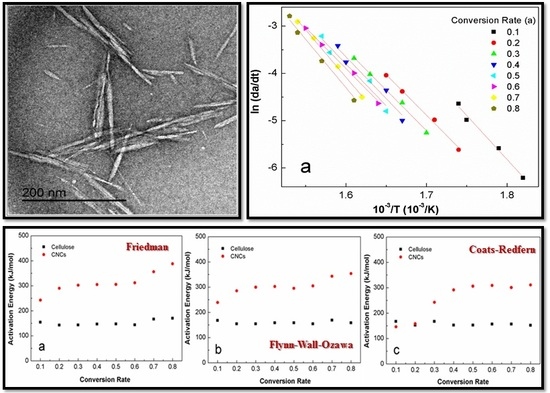