A near-optimal rule-based mode control (RBC) strategy was proposed for a target plug-in hybrid electric vehicle (PHEV) taking into account the drivetrain losses. Individual loss models were developed for drivetrain components including the gears, planetary gear (PG), bearings, and oil pump, based on experimental data and mathematical governing equations. Also, a loss model for the power electronic system was constructed, including loss from the motor-generator while rotating in the unloaded state. To evaluate the effect of the drivetrain losses on the operating mode control strategy, backward simulations were performed using dynamic programming (DP). DP selects the operating mode, which provides the highest efficiency for given driving conditions. It was found that the operating mode selection changes when drivetrain losses are included, depending on driving conditions. An operating mode schedule was developed with respect to the wheel power and vehicle speed, and based on the operating mode schedule, a RBC was obtained, which can be implemented in an on-line application. To evaluate the performance of the RBC, a forward simulator was constructed for the target PHEV. The simulation results show near-optimal performance of the RBC compared with dynamic-programming-based mode control in terms of the mode operation time and fuel economy. The RBC developed with drivetrain losses taken into account showed a 4%–5% improvement of the fuel economy over a similar RBC, which neglected the drivetrain losses. View Full-Text
Keywords: plug-in hybrid electric vehicle (PHEV); mode control strategy; drivetrain component losses; dynamic programming (DP) plug-in hybrid electric vehicle (PHEV); mode control strategy; drivetrain component losses; dynamic programming (DP)
►▼ Show Figures 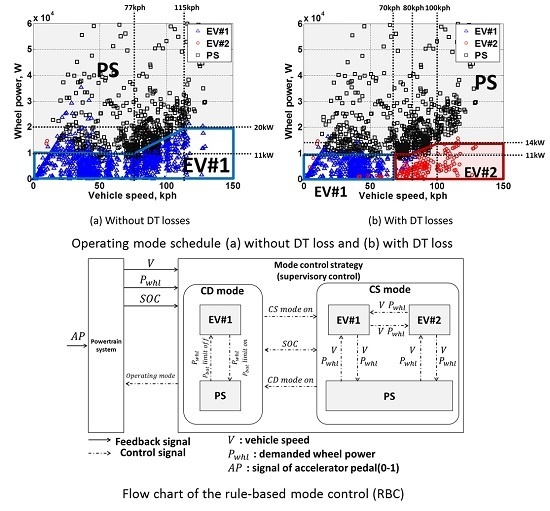