The results in this work show the influence of long-term operation on the decomposition of working fluids in eight different organic rankine cycle (ORC) power plants (both heat-led and electricity-led) in a range of 900 to 2 . All case study plants are using octamethyltrisiloxane (MDM) as a working fluid; the facilities are between six to 12 years old. Detailed analyses, including the fluid distribution throughout the cycle, are conducted on one system. All presented fluid samples are analyzed via head space gas chromatography mass spectrometry (HS-GC-MS). Besides the siloxane composition, the influence of contaminants, such as mineral oil-based lubricants (and their components), is examined. In most cases, the original working fluid degrades to fractions of siloxanes with a lower boiling point (low boilers) and fractions with a higher boiling point (high boilers). As a consequence of the analyses, a new fluid recycling and management system was designed and tested in one case study plant (Case Study #8). Pre-post comparisons of fluid samples prove the effectiveness of the applied methods. The results show that the recovery of used working fluid offers an alternative to the purchase of fresh fluid, since operating costs can be significantly reduced. For large facilities, the prices for new fluid range from € 15 per liter (in 2006) to € 22 per liter (in 2013), which is a large reinvestment, especially in light of filling volumes of 4000 liters to 7000 liters per unit. Using the aforementioned method, a price of € 8 per liter of recovered MDM can be achieved. View Full-Text
Keywords: organic rankine cycle (ORC); siloxane; working fluid; fluid stability; operational experience; fluid recycling organic rankine cycle (ORC); siloxane; working fluid; fluid stability; operational experience; fluid recycling
►▼ Show Figures 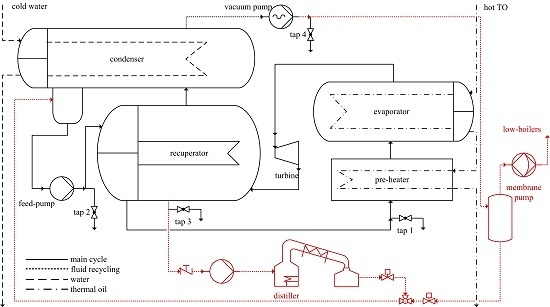