The information on the number of fuel cell vehicles on the road and hydrogen refueling stations in operation is based on a broad data collection effort organized by the core group of authors of this article under the umbrella of the AFC TCP. This survey was performed for the fifth year in a row, following those published in the period 2018–2021 [6,23,24,25]. To enable a solid comparison base over the years, each survey is started at the beginning of a year to capture the numbers as of 31 December of the previous year (2017–2020). In this article, the survey results from the data collection as of 31 December 2021 will be presented. The main information input for the numbers comes from the AFC TCP members on the basis of the survey input. However, as the data collection aimed to assess the global status, further data sources were utilized to obtain the global picture and include countries that are not members of the AFC TCP. Furthermore, this complementary approach enables a cross-check of the results, so that the most up-to-date and precise information sources are used for the global assessment. As the collected numbers are also provided to the IEA for the annual Global EV Outlook publication, a further check of the data was undertaken.
The survey focuses on road vehicles; therefore, fuel cell material handling devices are not included in the numbers. Similarly, fuel cell trains were not included in the analysis. The numbers reflect those vehicles on the roads, namely registered vehicles. Vehicles that were previously utilized in demonstration projects and already taken out of operation are not included. Similarly, vehicles that were produced and not yet put on the road are also not counted. The vehicle numbers were grouped into five categories, which are listed in Table 1.
Table 1 also includes the nomenclature used throughout this paper. The term fuel cell vehicle (FCV) refers to all five vehicle classes listed in Table 1. In comparison, the term fuel cell–electric vehicle (FCEV) is only used to refer to passenger cars. The category light commercial vehicles (LCV) is included as an additional category, but based on the experience from previous years, in some countries the number of light commercial vehicles instead pertains to passenger cars. To avoid double counting, this category is present in the survey despite the low number of vehicles reported in this category. Bigger vans for passenger transport are included in the passenger car category, whereas the definition bus is only valid with eight or more passengers carried. The trucks are divided into two categories, namely medium-duty (MD) and heavy-duty (HD) trucks, given that, in recent years, the fuel cell trucks were primarily in the MD category and there were the first indications of a developing HD fuel cell truck market. To follow this development, the trucks are classified into two categories.
The survey on the number of hydrogen refueling stations focuses on the stations that were built and entered operation. Stations that are being constructed or planned are not included in the numbers. The collected numbers represent both public and non-public stations based on the available information. For some countries, the number of public stations is also available, whereas in others it was not possible to distinguish between public, private and private accessible stations. Where available, further information on the stations will also be given in the results section, such as the number of public stations.

3. Results of the Data Collection

This section is divided into two parts. First, the number of fuel cell vehicles as of the end of 2021 will be presented in detail. Second, the state of the global hydrogen refueling station network at the end of year 2021 will be outlined. The collected data on both parts can be found in tabulated form in the Supplementary Materials.

After the analysis of the numbers of FCVs in different countries and for different vehicle classes in the previous section, this section presents the survey results for the number of hydrogen refueling stations in operation as of the end of 2021.
In the survey, 729 hydrogen refueling stations (HRSs) were counted as those in operation for the reporting date of 31 December 2021. For Austria [65], Canada [30], Croatia [66], China [67], Denmark [68], France [69], Germany [70], Japan [37], Korea [71], Spain [72], Sweden [73], Switzerland [70], and the U.S. [74], the information was delivered by the AFC TCP member countries as part of the survey. Numbers on the stations in Belgium, Czech Republic, Iceland, Netherlands, Norway, U.K., and Slovenia were provided by the Clean Hydrogen Partnership Programme Office [47]. The information from Australia is based on an IPHE country update [56]. For Costa Rica, Hungary, India, Latvia, Malaysia, Saudi Arabia, Taiwan, and the United Arab Emirates, the information was drawn from h2stations.org [75].
As Figure 7 shows, the top three countries, and at the same time those operating more than 100 HRS as of the reporting date, are Japan (169), China (147), and South Korea (114). With this, Japan maintained its leading position with the highest number of HRSs in operation, with a large share of 156 public stations. Thus, Japan is also the country with the highest number of public HRSs. In China, 65 additional stations were built but not taken into operation, eight stations were on pause and 10 under construction at the end of 2021 [67]. Germany, the U.S., and France are the other three countries that operate more than 50 HRSs each. In Germany and France, all reported stations are public or public accessible, whereas in the U.S. 49 of the 67 stations are public.
Figure 8 presents the distribution of hydrogen refueling stations across the different continents. Asia leads the picture with almost 60% of HRSs, followed by 29% in Europe, 10% in North America, and 1% in the rest of the world. In Asia, there is an almost balanced distribution between Japan (39%), China (34%), and South Korea (26%). In Europe, two-thirds of the stations are situated in two countries, namely Germany and France. However, the presence of further HRSs in many other European countries provides a positive contribution to hydrogen-based transportation in Europe. Finally, in North America, more than 90% of the stations are in the U.S. However, the Canadian stations extend hydrogen-driven transport in North America, and are therefore very important. In the U.S., 52 of the 67 stations are located in California. Hawaii, Massachusetts, Michigan, Ohio, each have two stations, whereas Arizona, Colorado, Connecticut, Delaware, New York, Virginia, and Washington each have one [74].

Data collection by the Advanced Fuel Cells Technology Collaboration Programme (AFC TCP) Executive Committee Members. The authors are deeply grateful to all Executive Committee Members of the AFC TCP who delivered data for the annual data collection. Special thanks also to the Clean Hydrogen Partnership Programme Office for supplying the European data. The results from the data collection were originally provided to the Global EV Outlook 2022 publication of the International Energy Agency (IEA). The authors thank Elizabeth Connelly and Jacob Teter from the IEA Secretariat for the excellent collaboration and information exchange. 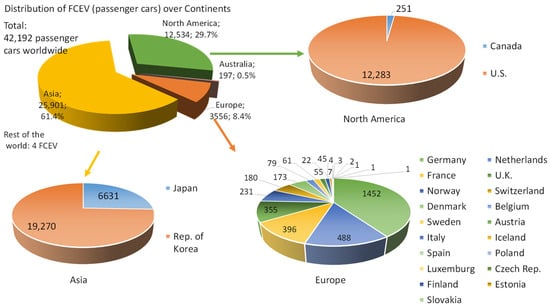 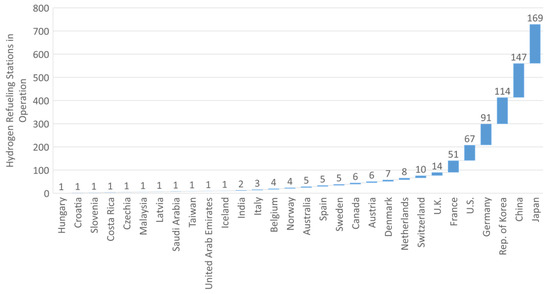 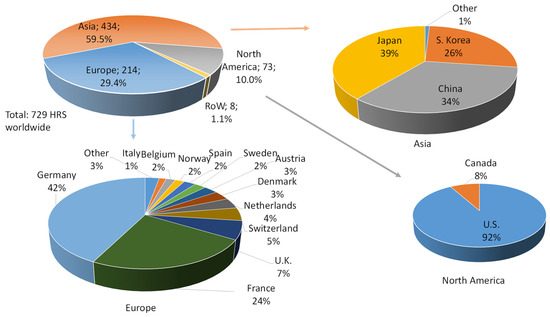 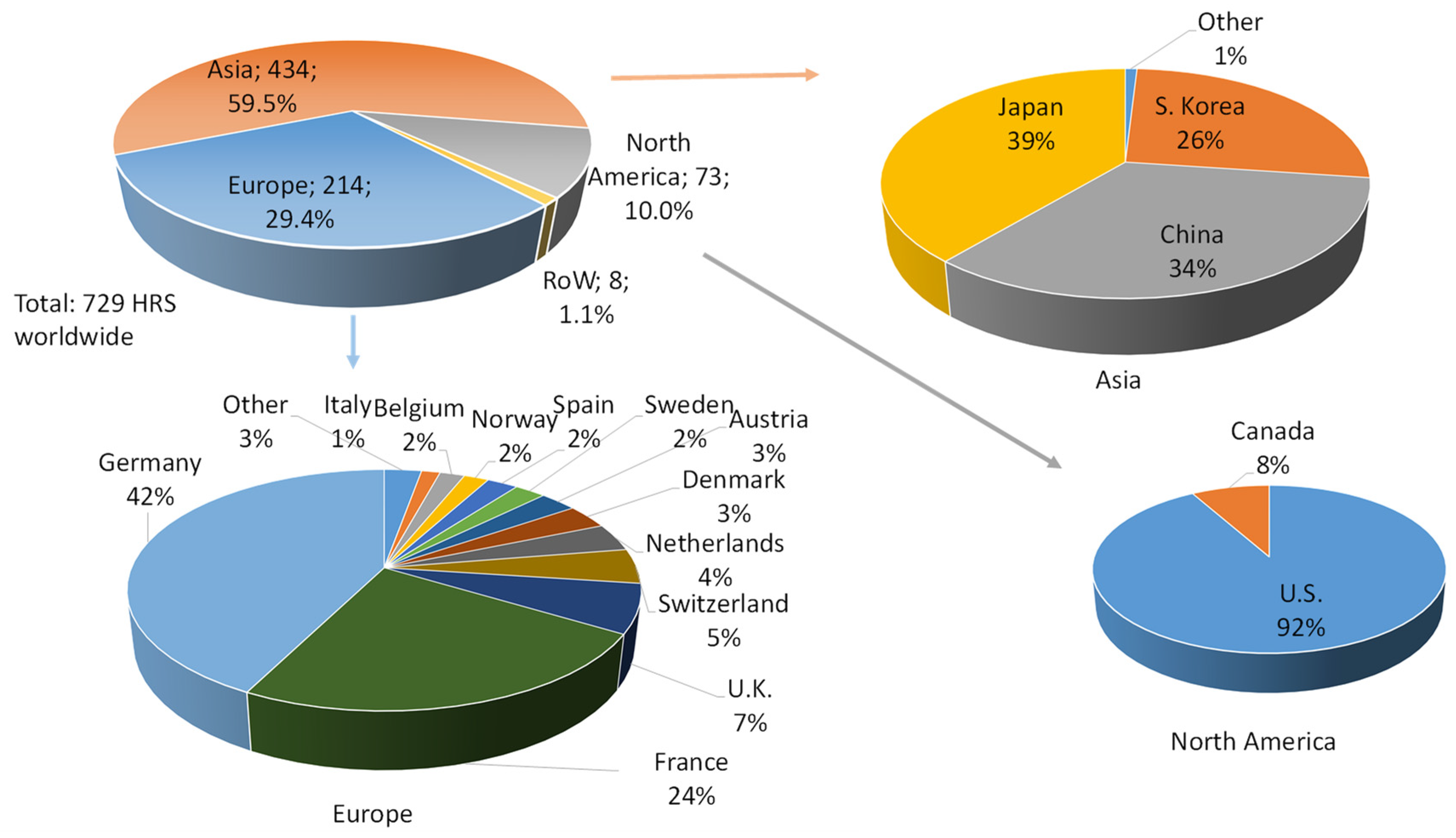 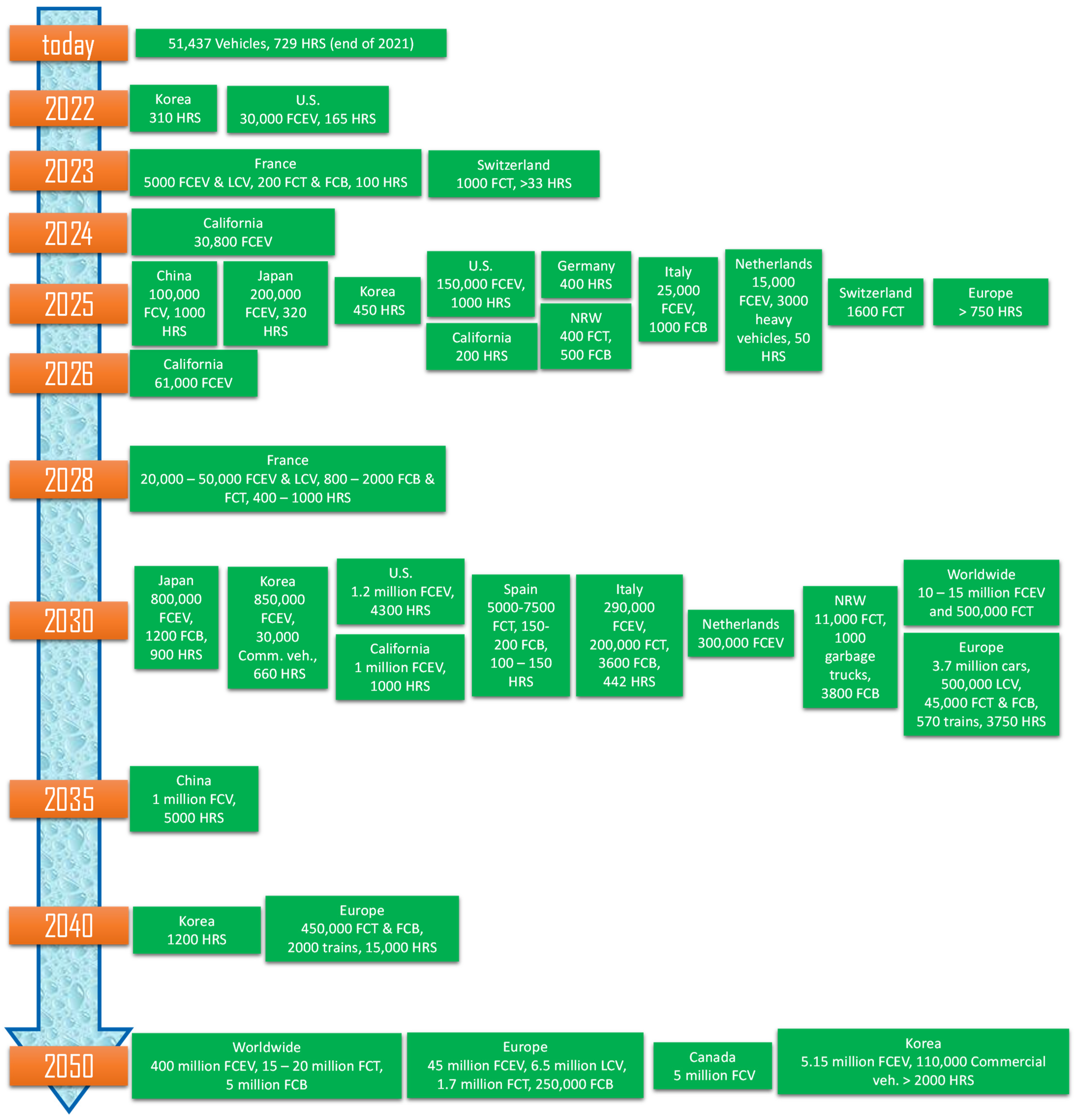 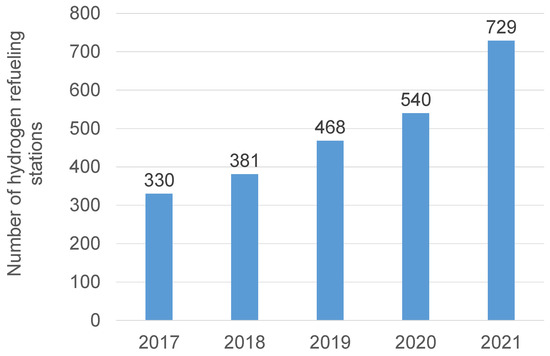 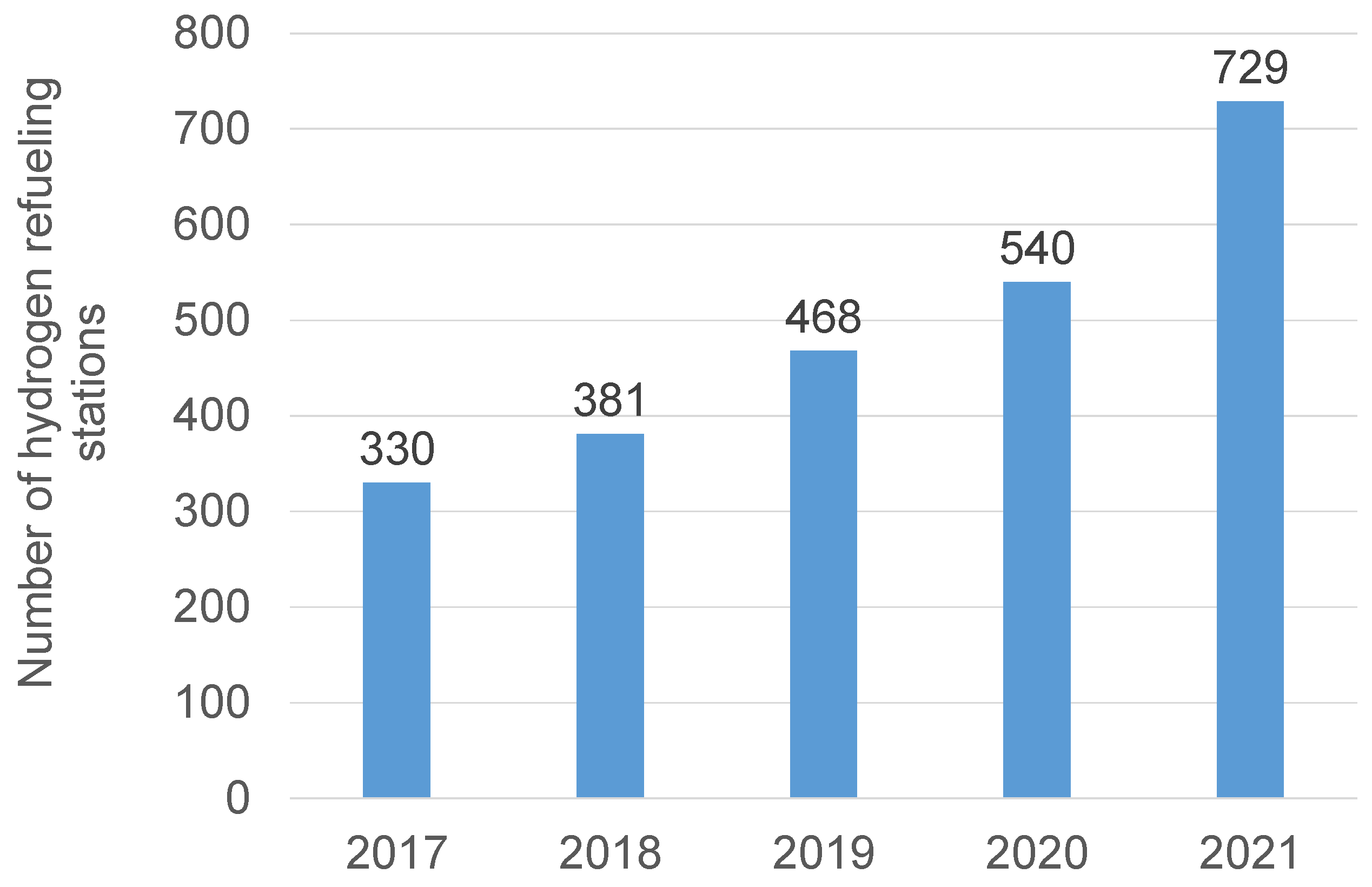 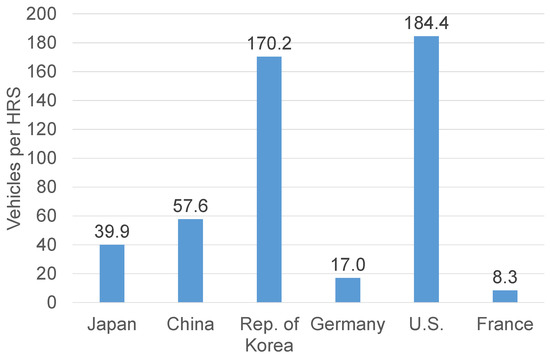 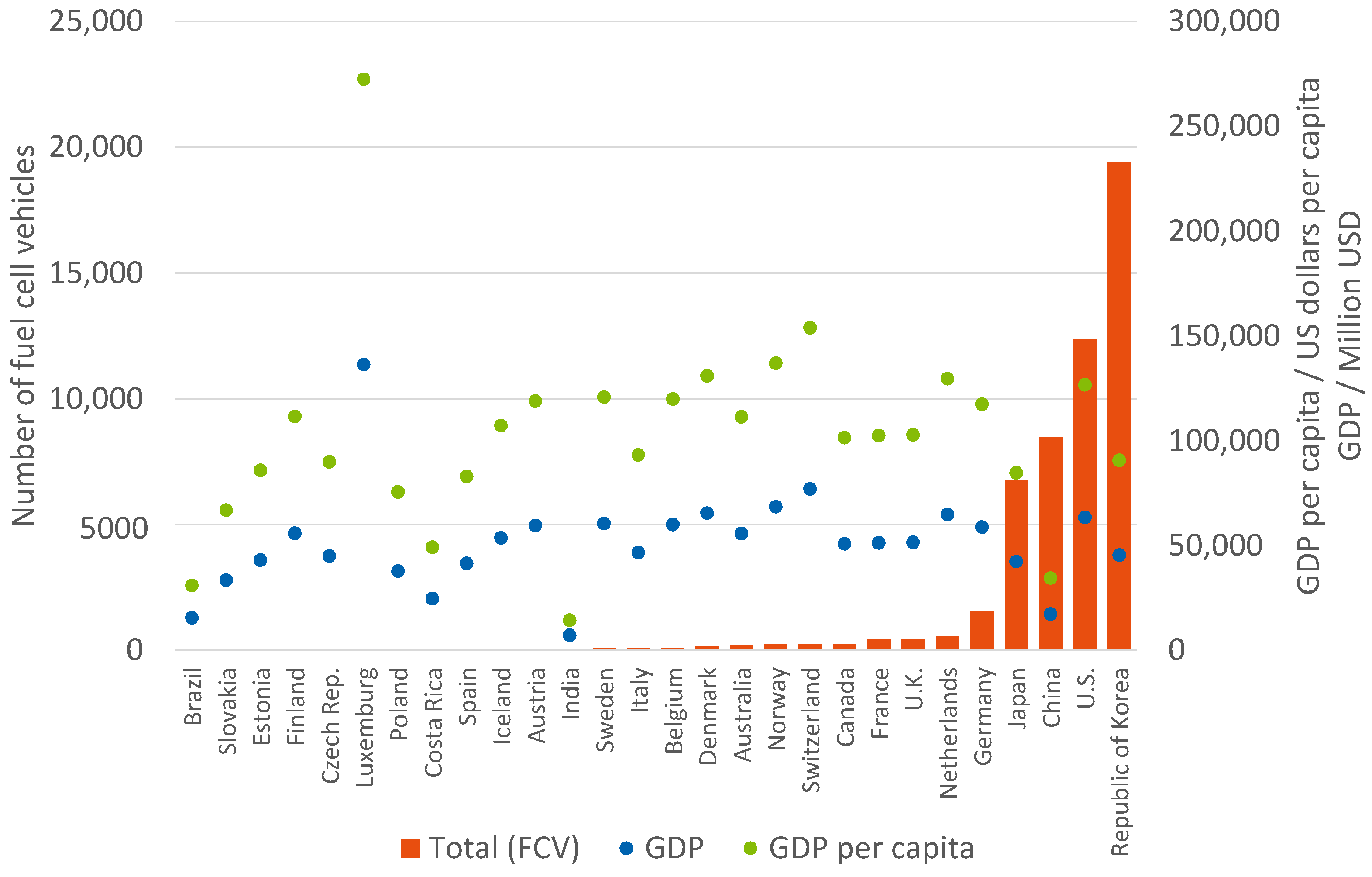 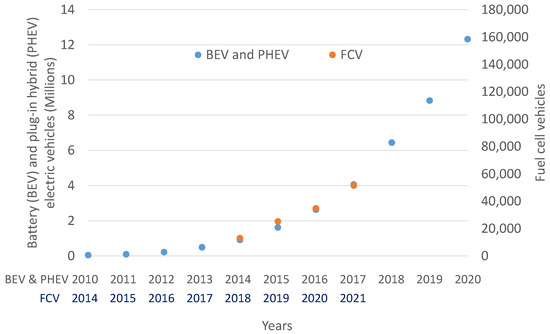 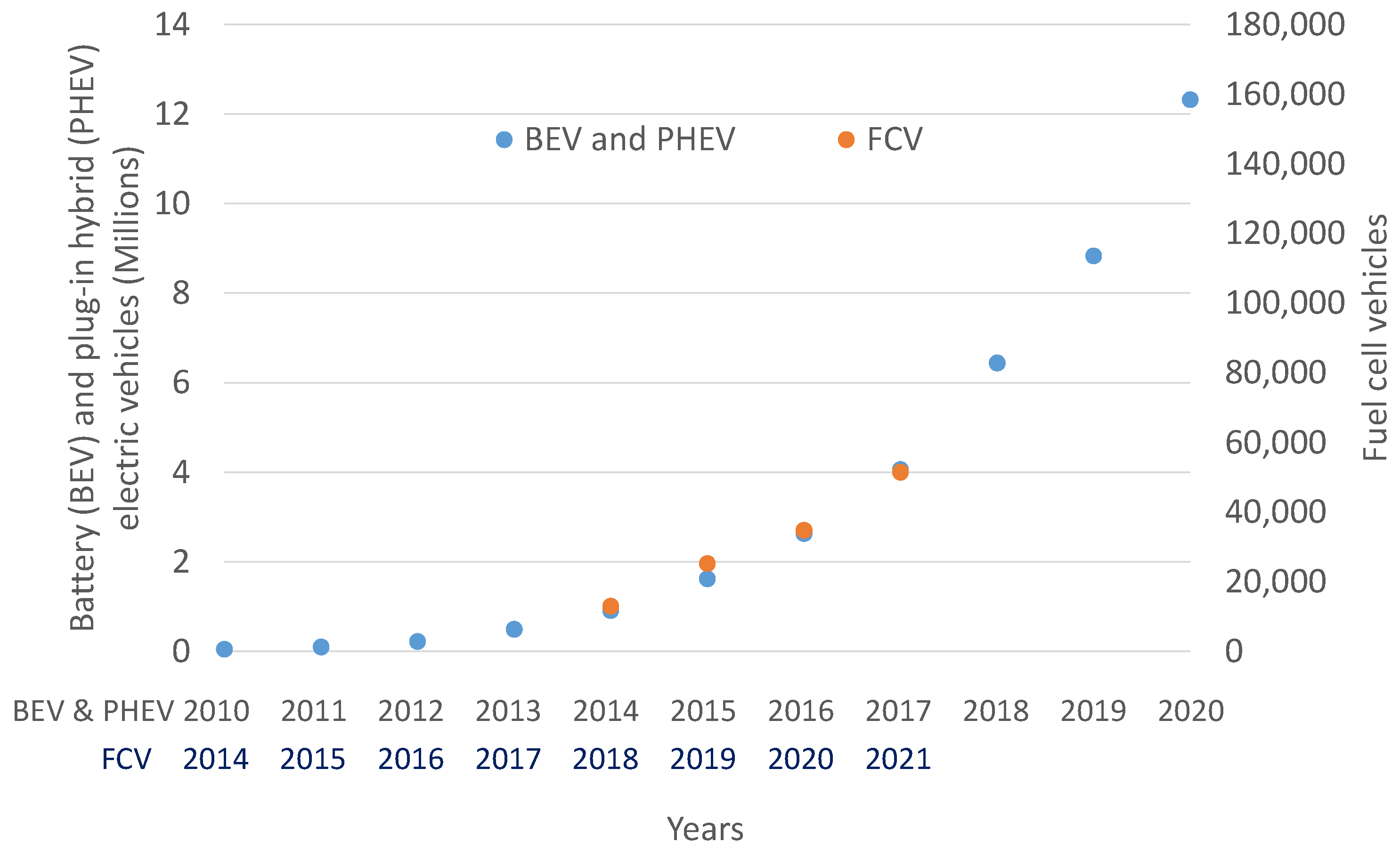