The article presents the application of the Fourier series to theoretical considerations on the method of maximum temperature control in thermodynamic cycles of internal combustion engines equipped with an additional independent kinematic system. The analysis assumes that the processes are zero-dimensional and the gases consumed in the engine cycles are perfect, simplifying the considerations for temperature control as a function of the two variables, pressure and volume, of which the volume as a geometric quantity can be completely controlled. In view of this fact, a predetermined temperature curve was assumed, ultimately reducing the considerations of specific volume changes, that is to say a kinematic system that could implement these changes. Moreover, in the analysis of volume changes, a cycle not used so far in the description of internal combustion engines was used. In the next step, the cycle was modified using the popular Vibe function, which was replaced in the theoretical cycle by two isochoric and isothermal transformations. Heat exchange was completely omitted in the considerations, in that it is of secondary importance, ultimately bringing the temperature function to the function of one variable, the angle of rotation of the crankshaft. Then, the kinematics was divided into the kinematics of the crank-piston system and the additional system, which was approximated with five words from the Fourier series, which in the technique correspond, for example, to the system of oscillators. At the end of the article we have explained one of the ways of actual technical implementation using a single nonlinear oscillator, the so-called ACC system equivalent to a few words from the mentioned Fourier series. View Full-Text
Keywords: Carnot; Otto; Atkinson; theoretical thermodynamic cycle; Fourier series; ACC engine; Vibe function Carnot; Otto; Atkinson; theoretical thermodynamic cycle; Fourier series; ACC engine; Vibe function
►▼ Show Figures 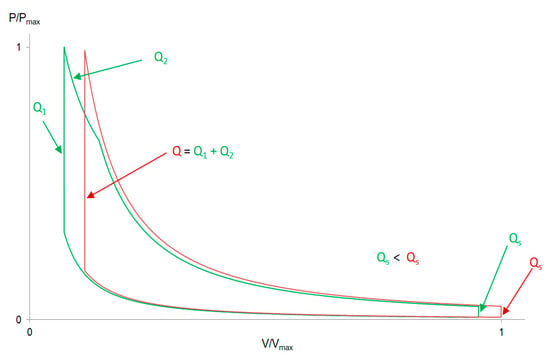