:
To investigate the optimum layouts of small vertical-axis wind turbines, a two-dimensional analysis of dynamic fluid body interaction is performed via computational fluid dynamics for a rotor pair in various configurations. The rotational speed of each turbine rotor (diameter: D = 50 mm) varies based on the equation of motion. First, the dependence of rotor performance on the gap distance (gap) between two rotors is investigated. For parallel layouts, counter-down (CD) layouts with blades moving downwind in the gap region yield a higher mean power than counter-up (CU) layouts with blades moving upwind in the gap region. CD layouts with gap/D = 0.5–1.0 yield a maximum average power that is 23% higher than that of an isolated single rotor. Assuming isotropic bidirectional wind speed, co-rotating (CO) layouts with the same rotational direction are superior to the combination of CD and CU layouts regardless of the gap distance. For tandem layouts, the inverse-rotation (IR) configuration shows an earlier wake recovery than the CO configuration. For 16-wind-direction layouts, both the IR and CO configurations indicate similar power distribution at gap/D = 2.0. For the first time, this study demonstrates the phase synchronization of two rotors via numerical simulation.
Keywords:
wind energy; vertical-axis wind turbine; computational fluid dynamics; dynamic interaction; closely spaced arrangements; phase synchronization; wind farm; dryland

Examples of the DFBI-CFD results presented as color contours of flow velocity (x-direction component) around the tandem layouts are illustrated in Figure 11. Figure 11a,b show results of the TCO layouts; Figure 11c,d, the TIR layouts; Figure 11a,c, the case of gap/D = 1; and Figure 11b,d, the case of gap/D = 10. In the case involving a short gap length (Figure 11a,c), the downwind rotor R2 was almost completely within the wake of the upwind rotor R1. As the two rotors rotated in the same direction in the TCO layout shown in Figure 11a, the flow speed in the region below the rotor pair became higher than that in the region above because of the constructive interference caused by the induced velocities. In the case involving a long gap length (Figure 11b,d), although the effects of the wake of R1 on R2 became less prominent, part of the meandering wake of R1 flowed into R2.
Figure 12a,b show the gap dependence of the normalized angular velocity and normalized power of each rotor in the tandem layouts, respectively. As shown in Figure 12a, the angular velocity of the upwind rotor R1 was smaller than that of an isolated single rotor until the gap space reached gap/D = 8, indicating the effect of downwind rotor R2 on upwind rotor R1. Even in the case where the two rotors separated from each other and reached a length of gap/D = 10, the angular velocity of R2 was 70–80% that of an isolated single rotor, and the power was 40–50%. The 3D CFD analysis of a straight-bladed VAWT conducted by Miyashita et al. [26] demonstrated approximately 90% wake recovery at a distance of x/D ~ 5. Therefore, the slow recovery of the wake shown in Figure 12 is attributable to the 2D calculation. The gap dependence of the angular velocity and the power between the TCO and TIR layouts differed only slightly until gap/D = 6. Beyond gap/D = 8, however, the power of the downwind rotor R2 in the TIR layout became larger than that in the TCO layout. Comparing Figure 11b,d, it was observed that in the TCO layout, the induced velocity of the downwind rotor R2 (rotating counterclockwise) caused the upward-deflected wake of the upwind rotor R1 (rotating counterclockwise) in front of R2 to be drawn downward; meanwhile, in the TIR layout, as the induced velocity of R2 (rotating clockwise) deflected the wake of R1 further, the region with higher velocity flowed into R2.
In a previous report [22] on the wake of the tandem layouts where the calculation time was shorter, little difference was observed between the TCO and TIR. However, we observed a significant difference in the wake between the TCO and TIR in our study (see Figure 12b).

3.4. Comparison between CFD and Experimental Results

In this study, computational fluid dynamics (CFD) simulations were performed for a two dimensional closely spaced vertical-axis wind turbine (VAWT) rotor pair using the dynamic fluid-body interaction (DFBI) method. The counter-down (CD) layout yielded a higher average power of the two rotors than the counter-up (CU) layout owing to the effects of induced velocity. The average power of the two rotors in the CD layout with gap/D = 0.5–1 was 23% higher than the power of an isolated single rotor. In the case involving a long gap in the tandem layouts, the downwind rotor in the tandem inverse-rotating (TIR) layout tended to generate more power than that in the co-rotating (TCO) layout. This is attributed to the wake deflection caused by the induced velocity of the downwind rotor. Under the assumption of a virtual isotropic wind speed distribution, the mean power generated in the co-rotation (CO) configuration was higher than that in the inverse-rotation (IR) configuration. When the gap space reached twice the rotor diameter, the 16-wind-direction distribution in terms of the averaged power of the two rotors in the CO and IR configurations became similar. The present study demonstrated the phase synchronization of two VAWT rotors via CFD analysis for the first time. In the synchronized state, the phase of torque difference between the two rotors investigated advanced that of the angular velocity difference by π/2. The mechanism of phase synchronization, as explained based on Bernoulli’s law, was attributed to the acceleration and decompression of fluid between mutually approaching blades.
However, the DFBI-CFD analysis conducted in this study is a 2D analysis that overestimates the performance of a 3D experimental rotor model and cannot consider 3D effects, such as tip loss. Moreover, its computational cost is high. To consider the 3D effects, further studies on the interactions between rotors are necessary. To achieve the final objective of determining the optimal layout of a VAWT wind farm, we intend to develop a low-cost method using a simple model based on the results obtained by the DFBI-CFD analysis in our future work.

This research was supported by JSPS KAKENHI Grant Number JP 18K05013 and the International Platform for Dryland Research and Education (IPDRE), Tottori University.

The data that support the findings of this study are available from the corresponding author, Y.H., upon reasonable request.

The authors would like to thank Shu Yamamoto for conducting the CFD analysis in the early stages of the study. 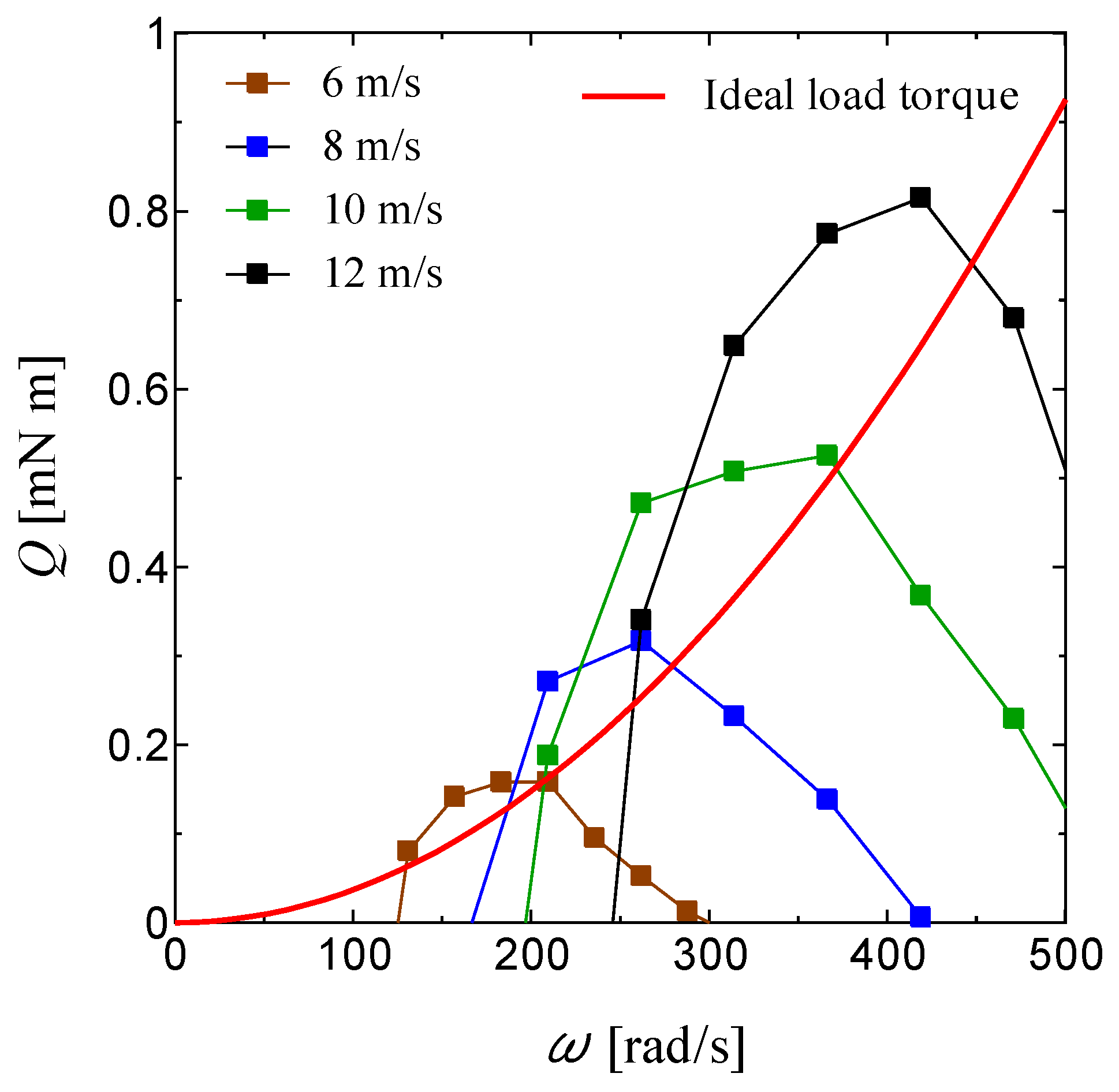 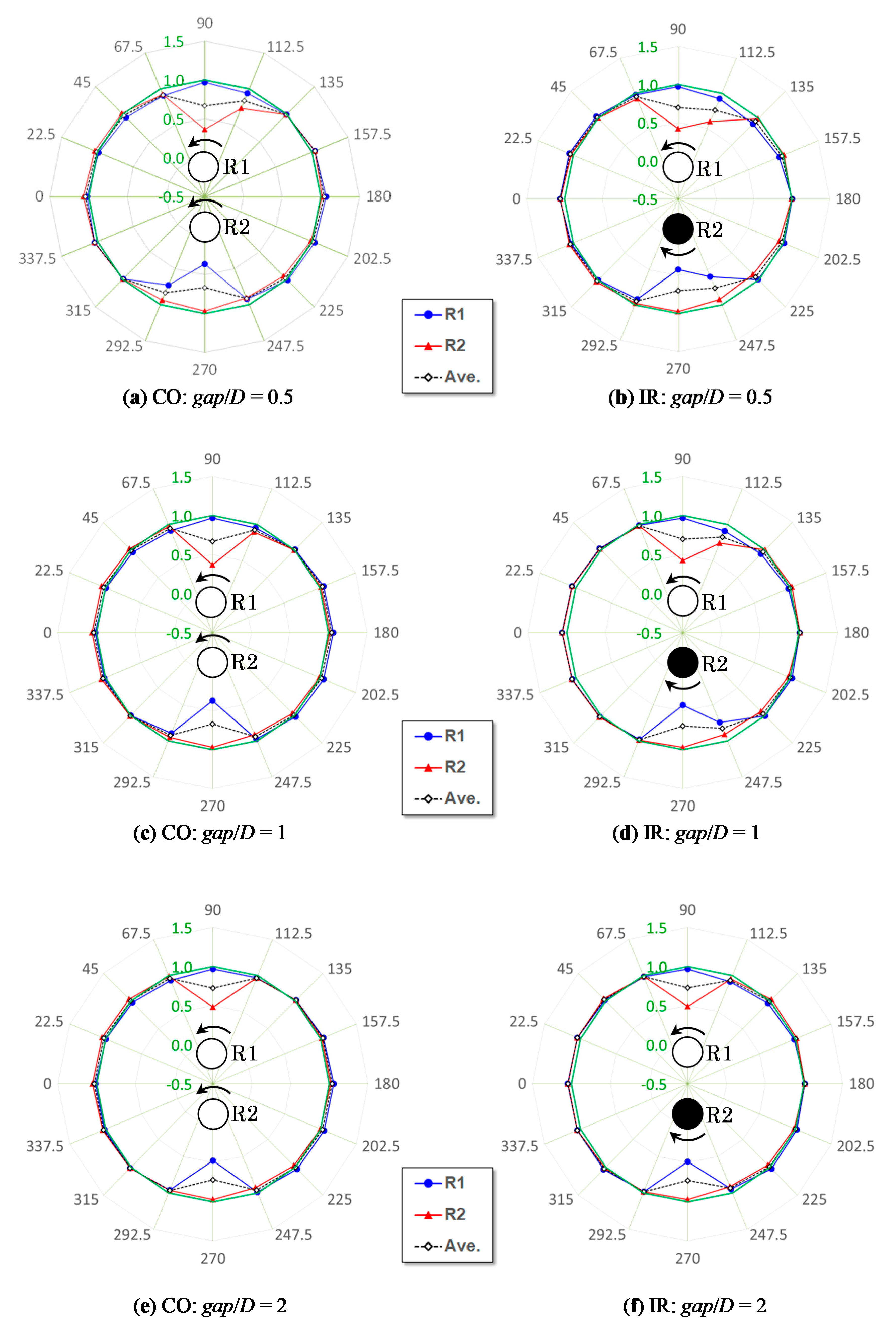 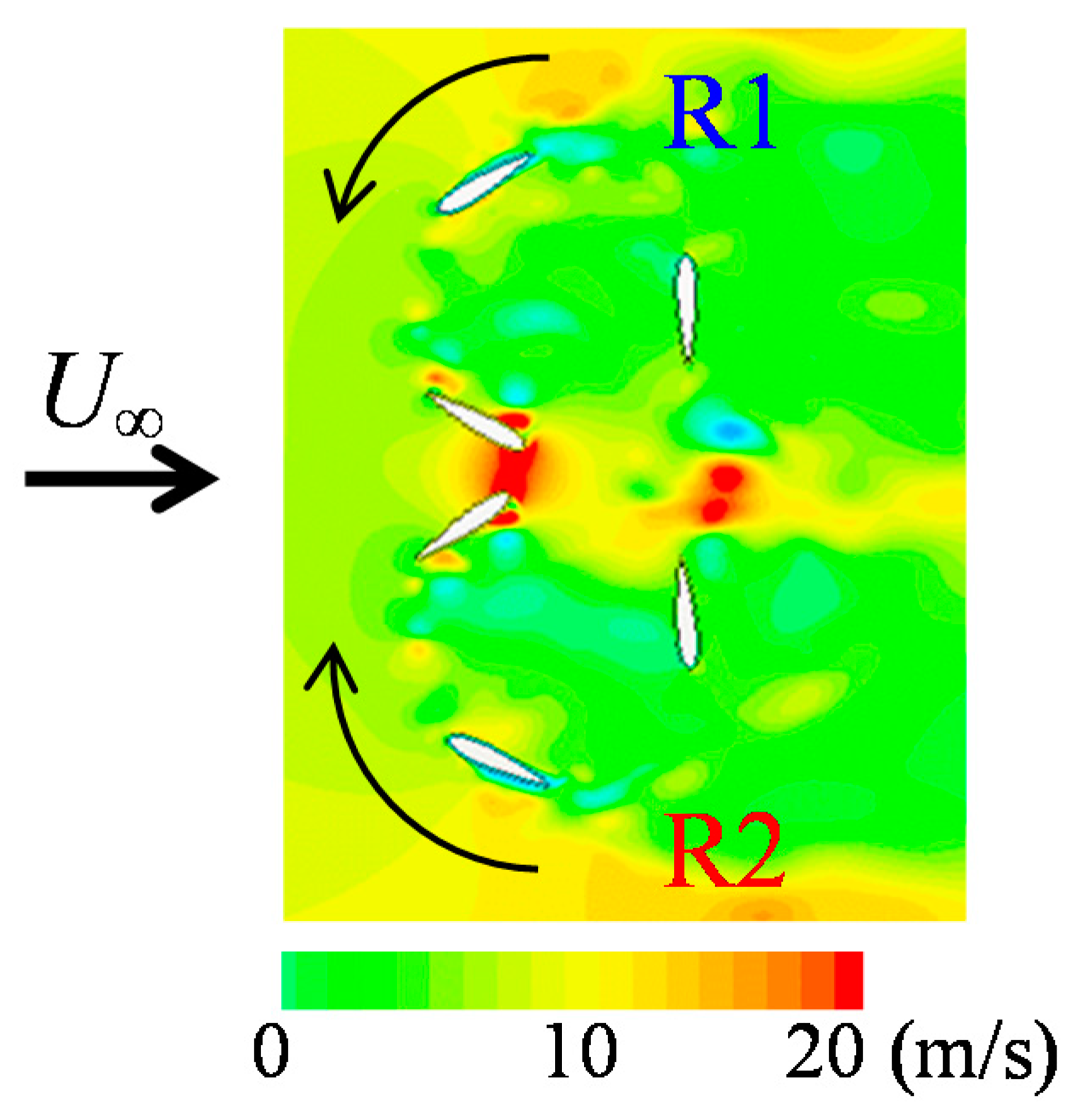 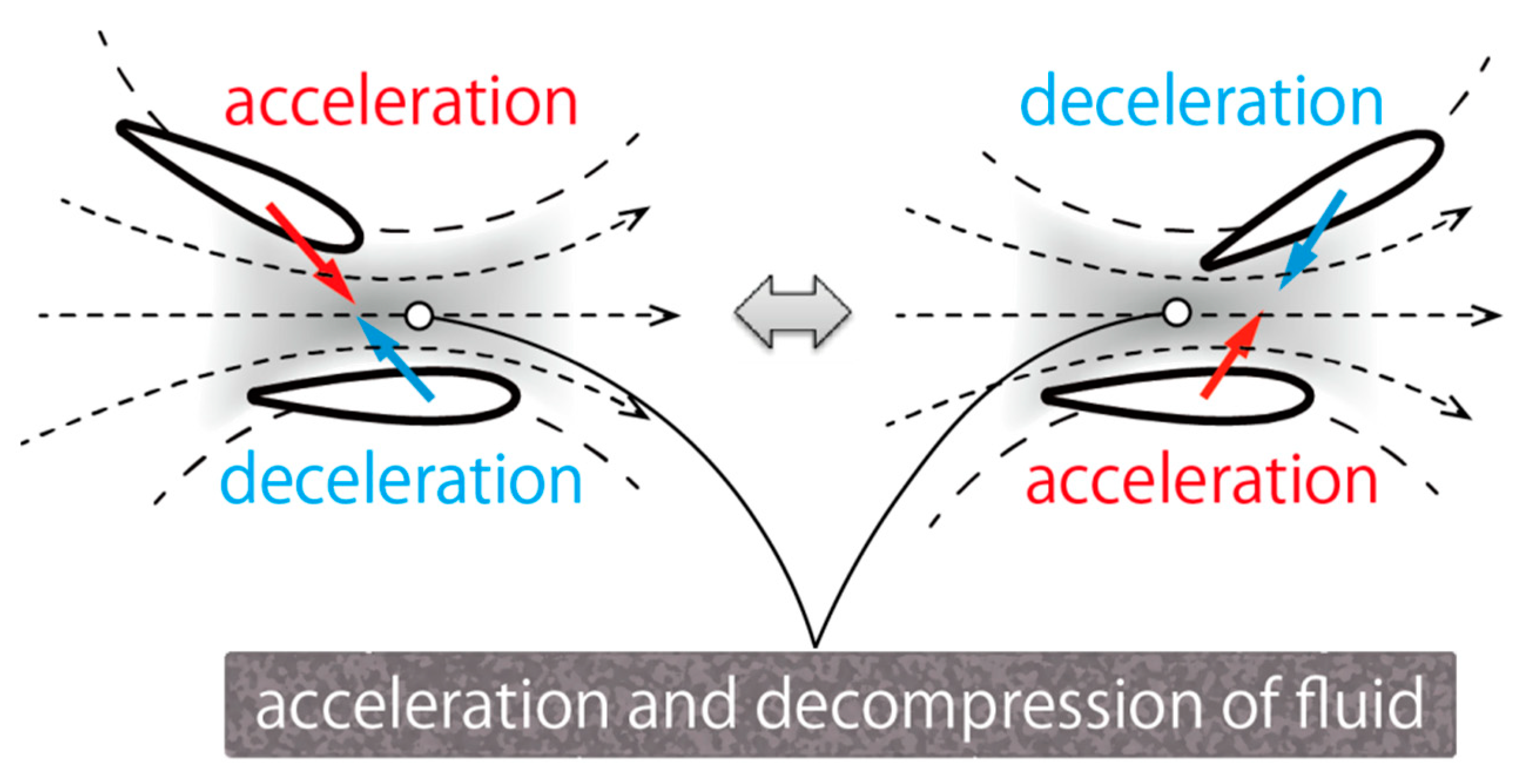