:
Soiling severely reduces solar mirror performance, requiring dispendious water consumption for cleaning operations and causing an increase in the levelized cost of energy (LCOE). An emerging technology for facing this problem consists of developing transparent self-cleaning coatings, able to be washed with a small amount of water by virtue of the modulation of surficial wetting properties. Nevertheless, the beneficial effects of coatings decrease in the first year, and coated mirrors show even higher soiling than non-coated ones. Moreover, it is important that coating production processes are economically convenient, consistent with the intended reduction of overall costs. The aim of this work is the research and development of a cheap and scalable solution, compatible with mirror fabrication steps and, in such a sense, economically advantageous. It involves the substitution of the alumina last layer of solar mirrors with more hydrophobic, potentially auxetic aluminum compounds, such as nitrides. In particular, 2D inorganic aluminum nitride thin films doped with metals (such as aluminum and silver) and non-metals have been fabricated by means of reactive sputtering deposition and characterized for the purpose of studying their self-cleaning behavior, finding a trade-off between wetting properties, optical clarity, and stability.
Keywords:
solar mirrors; aluminum nitride; sputtering deposition; self-cleaning coatings; auxetic properties

Coatings produced in this work are mono- or multi-layered, deposited by means of the reactive sputtering technique, using a proprietary multi-cathode apparatus equipped with magnetron and dual-magnetron cathodes operating in DC or pulsed DC and in the medium frequency mode, respectively.
For greater clarity in identifying manufactured samples, Table 1 shows the sample identification names, distinctive experimental fabrication conditions (such as total pressure (P0 in mbar) and reactive gas flow (in sccm)), and the thickness of coatings.
Ag ultrathin layers were grown in DC sputtering mode at an Ar pressure of 1.0 × 10−3 mbar and with 1.65 W/cm2 power density applied to the Al cathode. AlN layers were grown by means of reactive sputtering at an Ar + N2 pressure ranging from 1.0 × 10−2 to 4.4 × 10−4 mbar with a power density of 7.75 W/cm2 applied to the Al cathode.
Al2O3 film was deposited by means of reactive sputtering at an Ar + O2 pressure of 1.0 × 10−3 mbar with a power density of 7.75 W/cm2 supplied to the Al cathode.
The thickness of single layers was measured by means of a Surface Profiler TENCOR P-10.
UV-VIS-NIR analysis was performed using a double-beam Perkin-Elmer mod. A Lambda 900 instrument, equipped with an integrating sphere, was used to measure global spectral reflectance and transmittance. Measurements were collected in the 200–2500 nm spectral range under ambient conditions. A halon white (PTFE) reflectance standard was used as the baseline.
Vibrational analysis of materials was performed by means of micro-RAMAN and FTIR techniques. Fourier Transform Infrared (FTIR) spectra were recorded with a Bruker Fourier transform spectrometer model Equinox 55, equipped with a Deuterated triglycine sulphate detector operating in the 400–4000 cm−1 range and an MCT detector operating in the 560–8000 cm−1. The resolution was 4 cm−1. Raman spectra were collected with a Renishaw visible Raman spectrometer system, equipped with a confocal microscope. Laser excitation at 514 nm (green) was supplied by a YAG double-diode pumped laser (20 mW).
The Static Water Contact Angle (WCA) was measured with the direct optical method of drop-shape analysis, by means of the contact angle meter KRUSS DSA-100.
The same Renishaw mod. inVia Raman spectrometer equipped with a 514 nm Argon ion laser and an 1800 L/mm grating was used to collect photoluminescence (PL) spectra in the 540–950 nm range.
Annealing tests were performed by exposing samples in a vacuum environment to thermal cycles at the temperatures of 470 °C (AlNpost) and 560 °C for 8 h (AlNpre2, AlNpost2).
Photocatalytic behavior was evaluated by means of a thin-film exposition test adapted from the normed method ISO10678, consisting of exposing samples immersed in a solution of Methylene Blue to UV lamp (253 nm) irradiation for 90 min and measuring the absorption of the chromophore at 653 nm before and after the test. The organic dye in the presence of UV radiation was degraded by photolysis promoted by the tested samples, which act as photo-catalysts.

This work illustrates the potential of using AlN-based politypoid metamaterials to change the wettability of solar mirrors, for the purpose of reducing water consumption in O&M and hence LCOE produced in concentrated solar power plants. In particular, it has been shown to be possible to change the wettability (from 61° to 100° WCA), promoting auxetic and photocatalytic properties in sputtered metamaterials, by means of mixed-phase polycrystalline nitrides 2D growth and doping with metals (such as aluminum and/or silver) and non-metals (such as nitrogen and/or oxygen), preserving optical clarity in the visible solar range. It is possible to find a trade-off between wetting performance and optical properties, granting appropriate durability over time.
In conclusion, via proper fabrication skills, self-cleaning metamaterials have been tailored, produced, characterized, and selected to function in a solar range. A similar original approach that combines hydrophobic and photocatalytic effects is promising for the goal of a significant reduction of water consumption in solar mirrors and their cleaning and maintenance. The proposed solution is cheap, scalable, and has a potentially easy integration in already-existing production lines of commercial solar mirrors.

The results presented in this paper have been obtained in the framework of the project “Concentrating Solar Power”, under the “Electric System Research” Programme 2019-2021, with the financial support of Italian MITE, Italian Ministry of Ecological Transition. 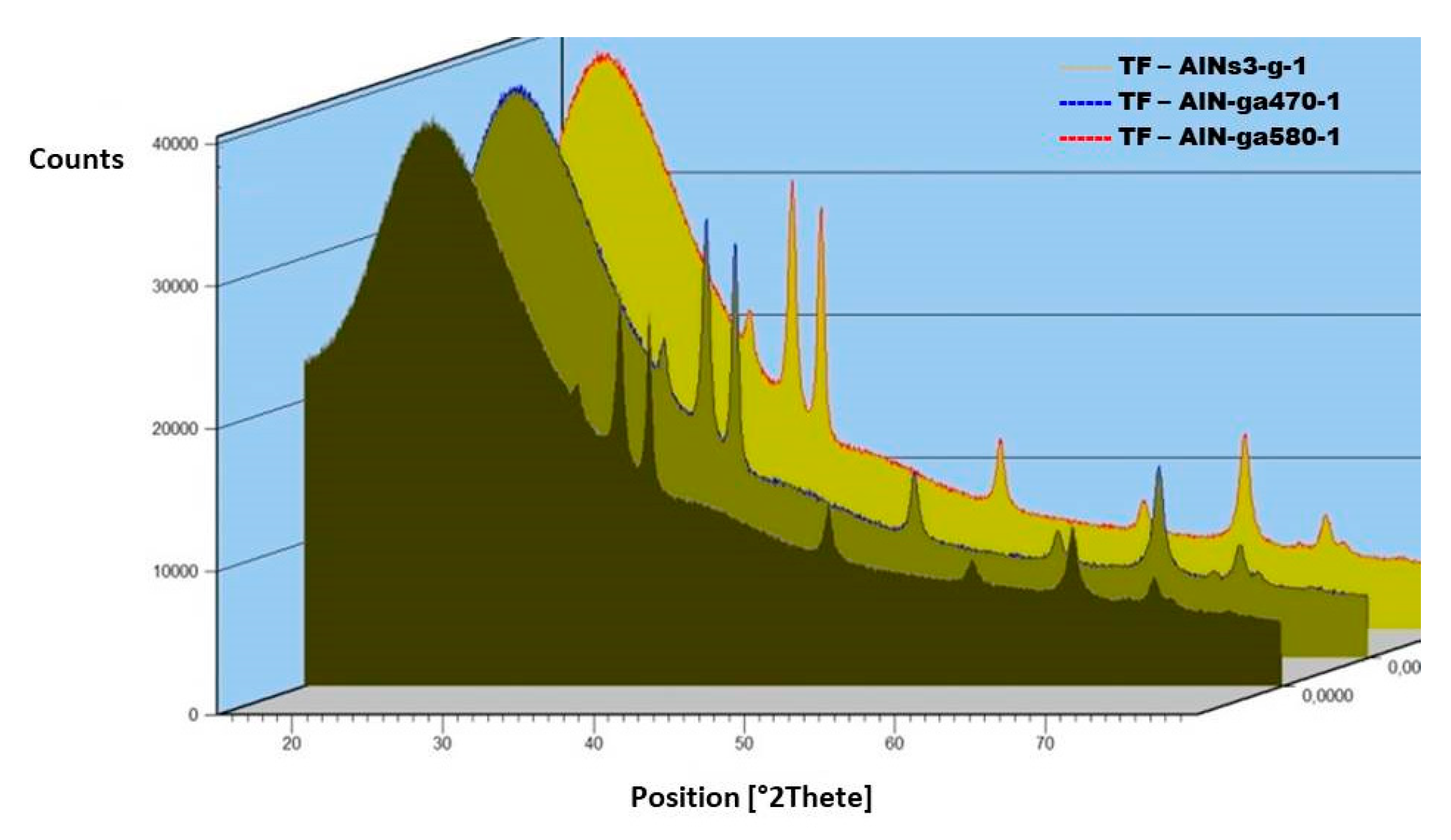 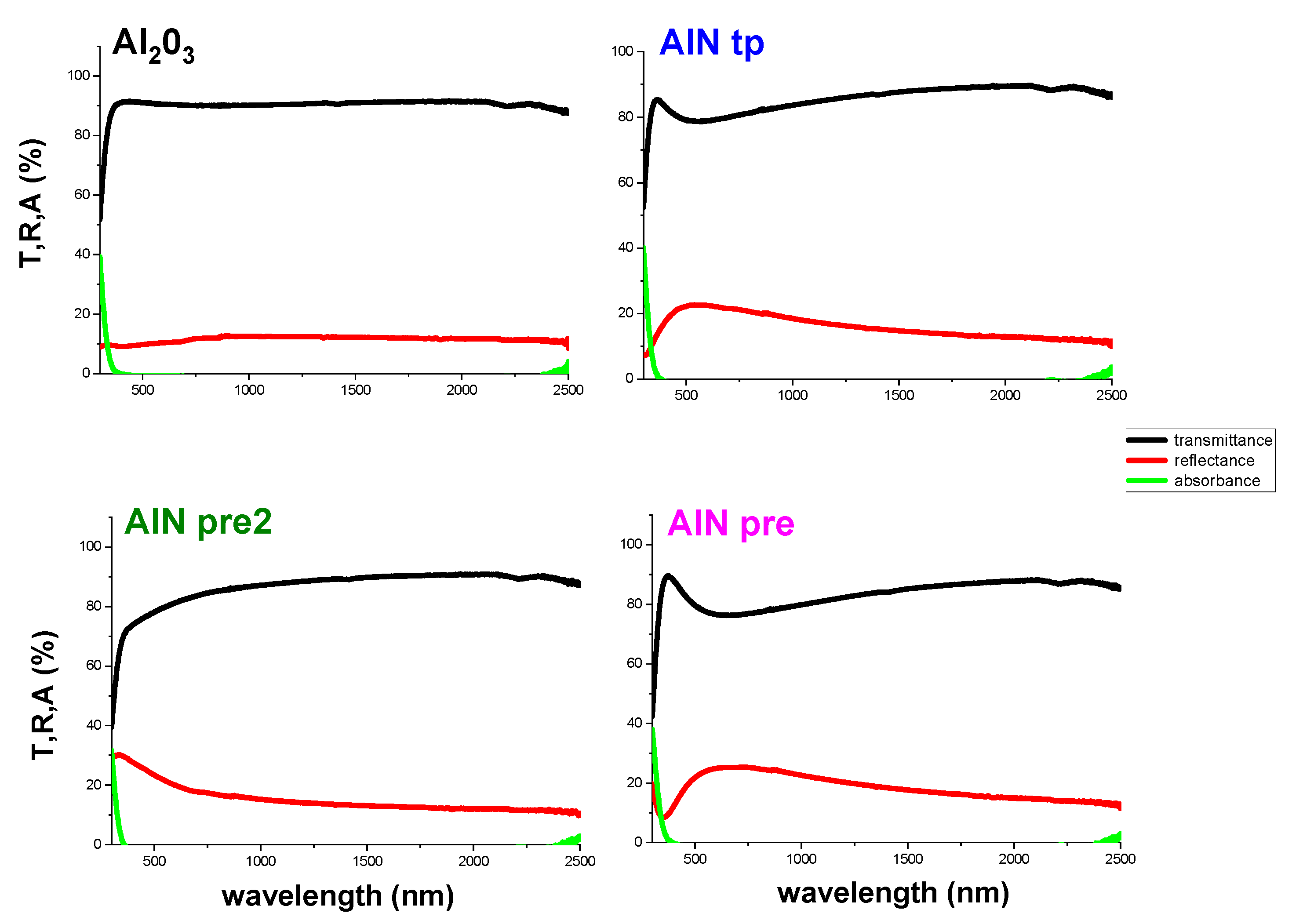 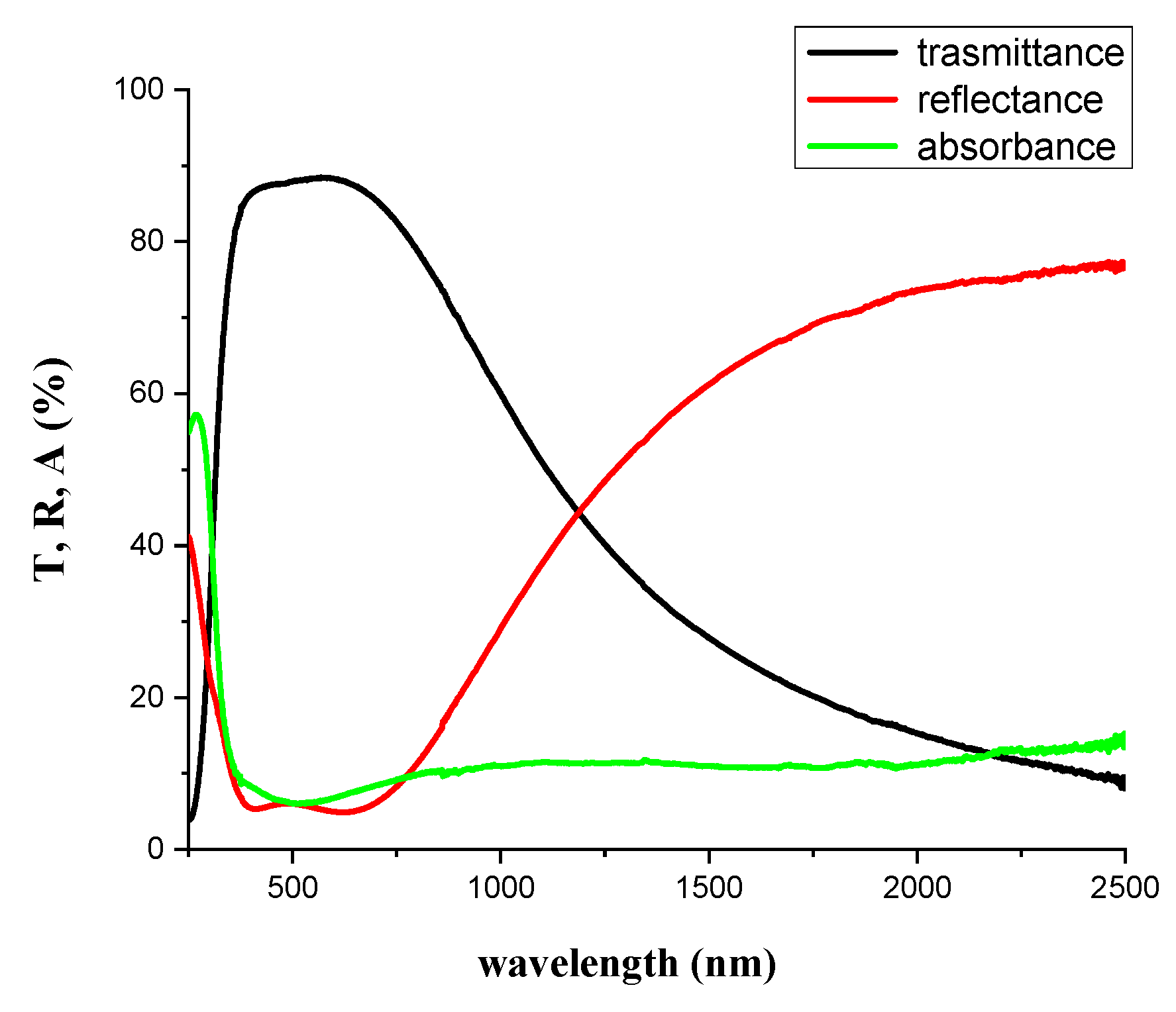 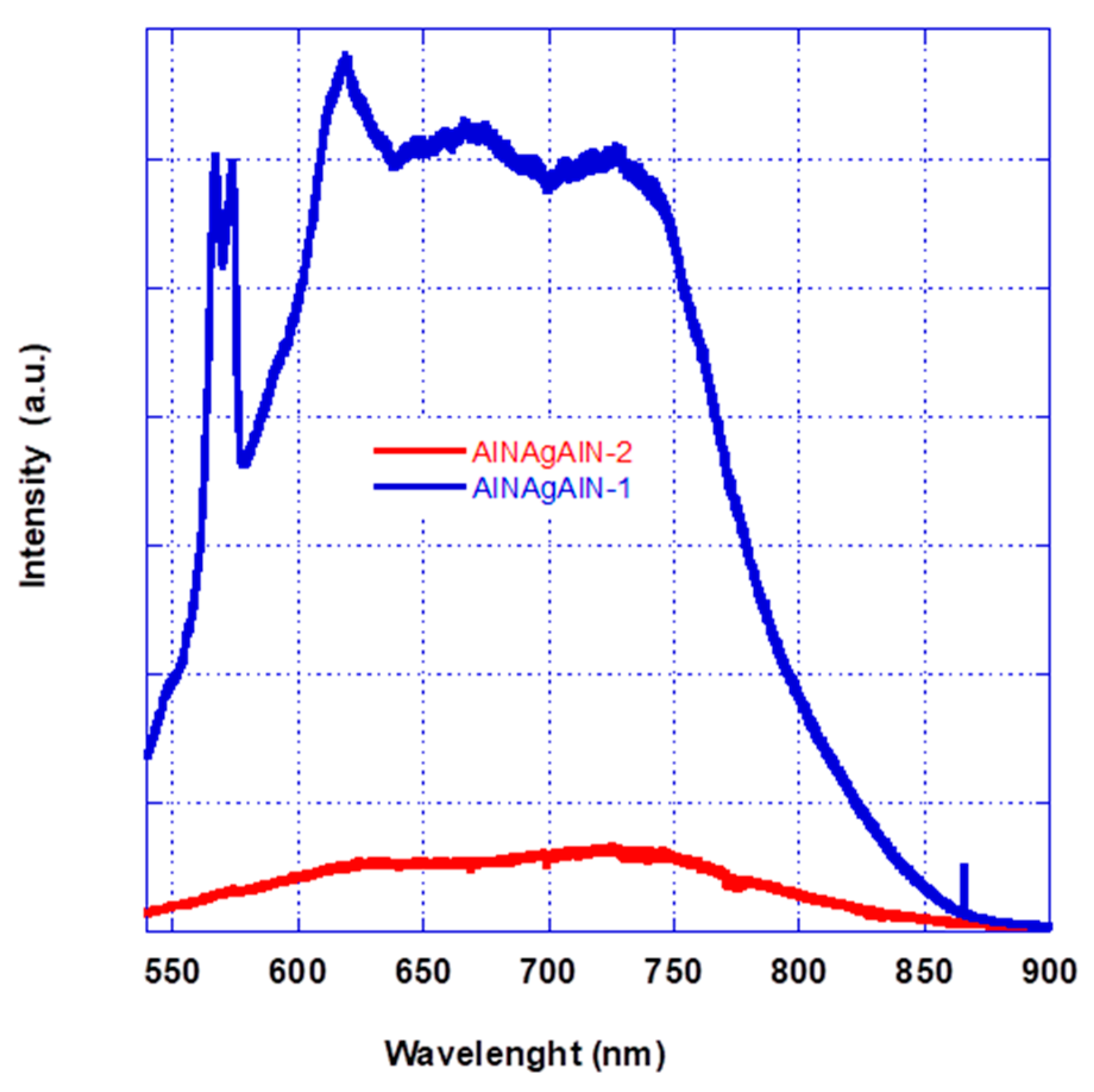