Life Cycle Assessment of Bioethanol Production: A Review of Feedstock, Technology and Methodology
Next Article in Special Issue

Refining and Reuse of Waste Lube Oil in SI Engines: A Novel Approach for a Sustainable Environment

:
This paper presents a comparison of the 24-month production of electricity and momentary power by two photovoltaic systems with a nominal power of 1000 Wp each. The analyzed systems are connected to the power grid and operate independently: a fixed system with optimal all-year-round angular positioning and an astronomical-sensor-controlled dual-axis tracking system. The systems under consideration consist of PV modules with a unit electrical power of 200 Wp, and the production technology of those modules is the same. The tested systems were located on the building rooftop of the Faculty of Control, Robotics and Electrical Engineering of the Poznan University of Technology in Poland (Central Poland, 52°24.4152′ N, 16°55.7958′ E) at a height of 30 m above ground level. The measurements take into account the consumption of electricity by the actuators of the dual-axis positioning system. Increases in the produced electricity by 35.6% and 44.7% were observed for local climatic conditions during the first and second measuring years, respectively, when comparing the use of the dual-axis tracking system with the use of fixed units. Results show that the analyzed region of central Poland, represented by the city of Poznań, creates favorable climatic conditions for the use of astronomical-sensor spatial positioning systems for photovoltaic modules, also in the case of a significant share of diffuse solar radiation in the global value. These results may make the planning of solar tracking investments easier and help with the estimate calculations of the total investment return period and operational costs.
Keywords:
sun tracking system; photovoltaic conversion; energy gain; spatial optimization; renewable energy source

The dual-axis tracking system allows for a change in the spatial orientation of photovoltaic modules using a control system that integrates astronomical positioning and sensor-based positioning. The mechanical system ensures a change in the angle of azimuth for the east–west direction in the range between −90 and 90° in relation to the southern azimuth and a change in the angle of inclination ranging between 0 and 90°. The choice of the control strategy depends on the value of the irradiation of the solar radiation measured by an additional sensor in the form of a pyranometer, installed close to the tested system. Any registration of an irradiance value exceeding 200 W/m2 causes the switching of the astronomical control to the sensor-based control.
Figure 6 presents the algorithm of the two-axis tracking system operation.
A schematic diagram of the tracking system is presented in Figure 7.
The inverters used in the maximum power point tracking system use the perturbation and observation method (P&O). In the P&O method, the operating voltage of the PV generator is disturbed by a small increase in dUPV, and as a consequence, there is a change in power dPPV. If the increase in power occurs, changes in operating voltage in the same direction should be continued. Otherwise, the direction of voltage increase should be changed. In the implemented method, the knowledge of the current–voltage characteristics of a PV generator is not required, which is the advantage of the method. The difficulty of the method is that with constant irradiation, the power of the generator oscillates around the maximum power point.
An image of the wiring diagram of the solar radiation detection block for the sensor-based control of each electrical actuator of the dual-axis tracking system is presented in Figure 8.
The detection part presented in Figure 8, built of semiconductor elements, operates in a differential configuration and sends a signal to the control unit to supply the executive elements in the form of electric actuators. Based on different levels of voltage signals from diode sensors D5–D6 and D7–D8, which determine the state of balance of the illuminated photodetectors, the linear slide actuator is powered. This enables a change in the spatial orientation of the set of photocells. The supply voltage of the actuator is maintained until the state of balance, understood as the identity of voltages in both detection branches of semiconductor elements D5–D6–D7–D8, is obtained. Transistors Q8 and Q5 are the elements controlled in the differential solar radiation detection system. Uneven illumination of the pairs of photodetectors causes an exit from the state of balance and the appearance of voltage which controls the relevant transistor. The achievement of the end position, signaled by the activation of the integrated microswitches, allows for the system to be switched off for sunrise and sunset. The additional element in the form of the twilight detection photoresistor U4 enables the detection block to be switched off if there is no solar radiation. The system moves to its initial position, which approximates the eastern direction with the appropriate location of the structure in relation to the southern azimuth. The used linear slide actuators allow for a change in the position with a resolution of 1 mm/380 imp.
The control algorithm implemented was provided using the Micro800 programmable controller. The determination of the position of the photovoltaic module is possible as a result of the application of incremental magnetic encoders. A sensor, in the form of an integrated circuit over which a magnet rotates in the axis of rotation of the actuator, measures the Hall voltage on electrode leads placed perpendicularly in relation to the magnetic field line, thus determining its strength, whose value depends on the actual tilt of the magnet. The task of the sensor is the detection of the angular translocation of the magnetic shield.
The use of the hybrid astronomical-sensor control is prompted by the frequent transmission of control signals and additional consumption of electricity in the situation of heavy cloud cover in the geographical location of the installation site of the photovoltaic modules. When the sky is covered partially or totally with clouds, the control system positioned the plane of photocells towards the brightest point on the sky, making the energy balance much worse.
Figure 9 presents the periodic consumption of electricity for the needs of the dual-axis positioning system for the first and second measuring year. Electricity was measured continuously for two years. On the basis of the daily values, the monthly values were determined.
An image of the single structure operating in the fixed system with the determined optimal angle of inclination and the dual-axis tracking system is presented in Figure 10.
The dual-axis tracking system works together with a vane anemometer to measure the speed and direction of the wind. This allows the plane of the photovoltaic modules to be set in a horizontal position if the pre-set wind speed is exceeded, in order to protect the system from mechanical damage.
Within the plane of the silicon modules, solar radiation power density sensors were also installed. These sensors consist of a microprocessor measuring system. The instrument is provided with a digital current interface with transients compliant with the RS232 standard. By using a converter, the meters were connected to the master data collection system. This enables registration of the total solar radiation within the plane of each photovoltaic module at 10-s increments, both in the fixed and tracking configuration. Each photovoltaic module works with a transformerless microinverter that operates the global tracking of the maximum power point (MPPT), which is connected directly to the power grid. The converters used enable the wireless transmission of the data being measured to the data archiving system in the form of a PC using Bluetooth technology.

The design and construction of photovoltaic units were conducted by A.B. The solar radiation model analyses presented in this manuscript and the evaluation were carried out by G.F.-J., A.B. and G.F.-J. supervised the research and prepared the manuscript. All authors have read and agreed to the published version of the manuscript. 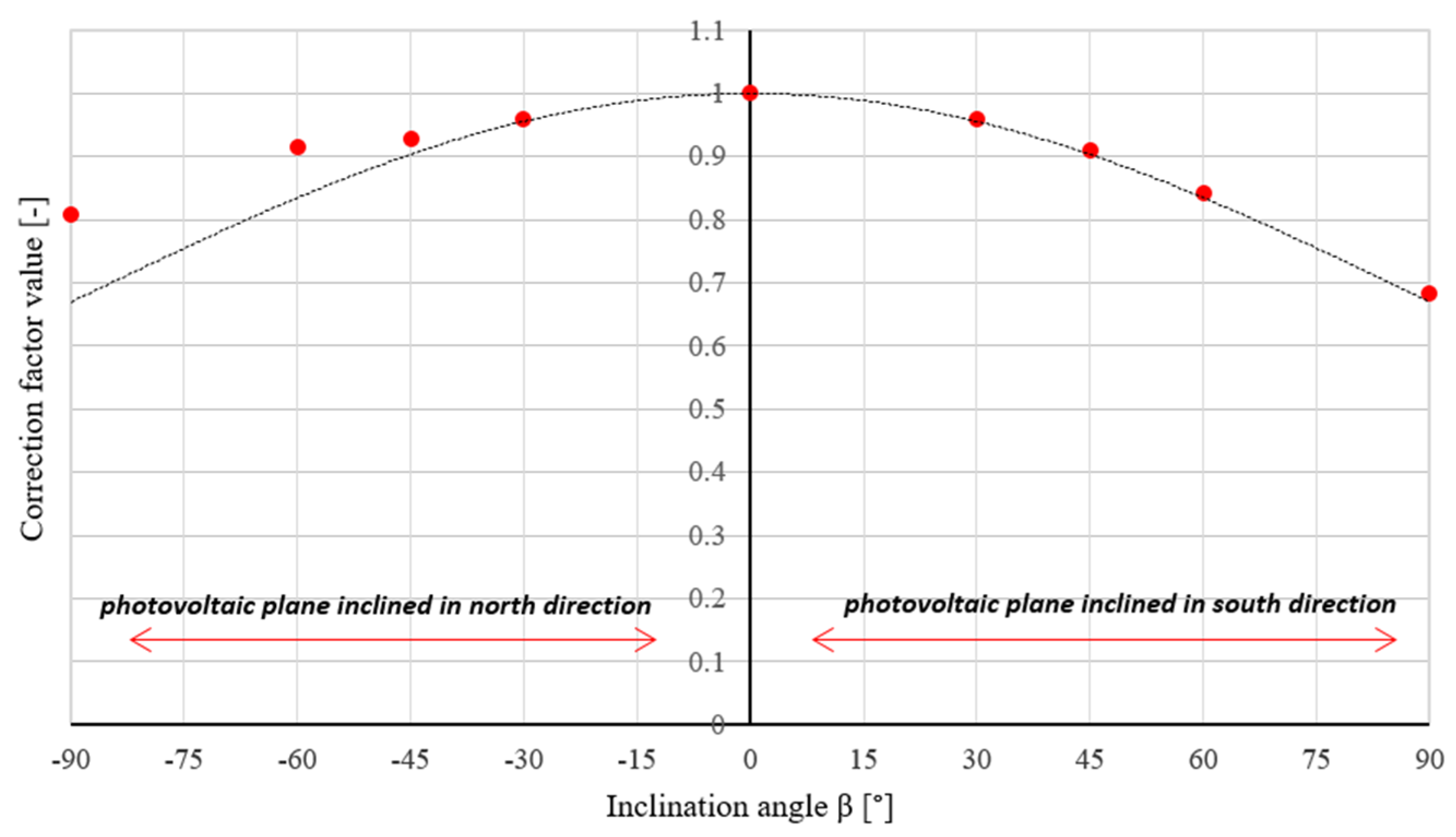 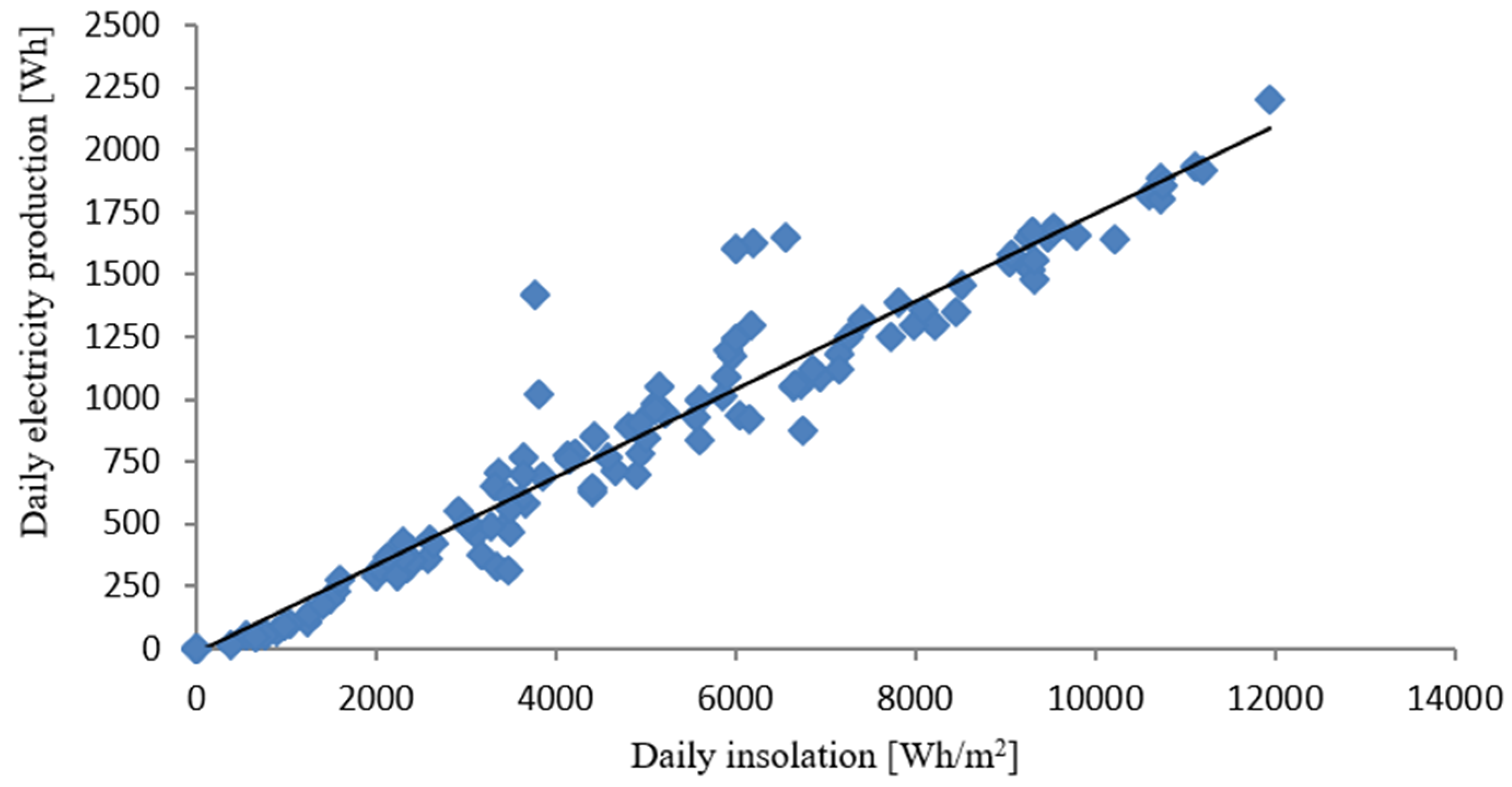 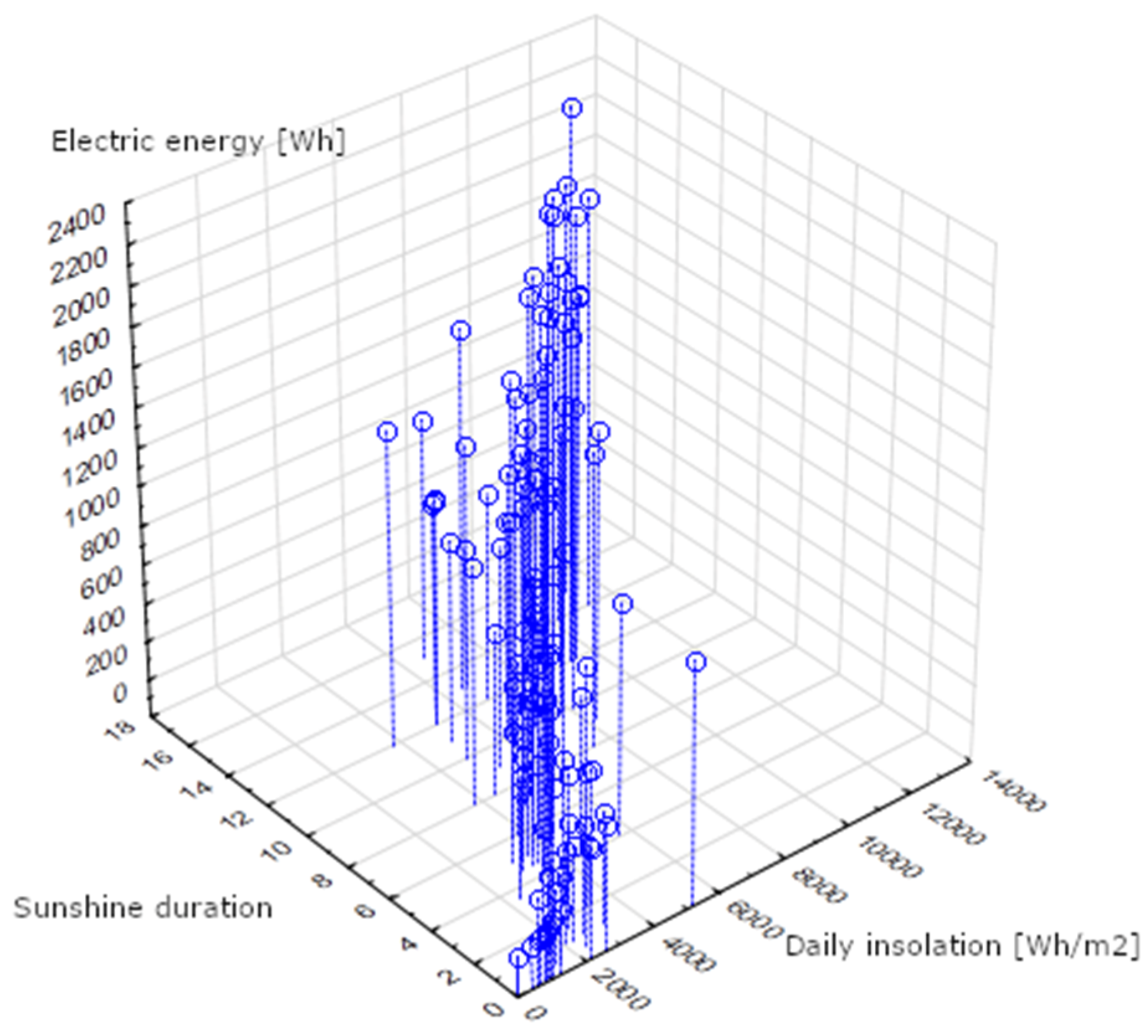 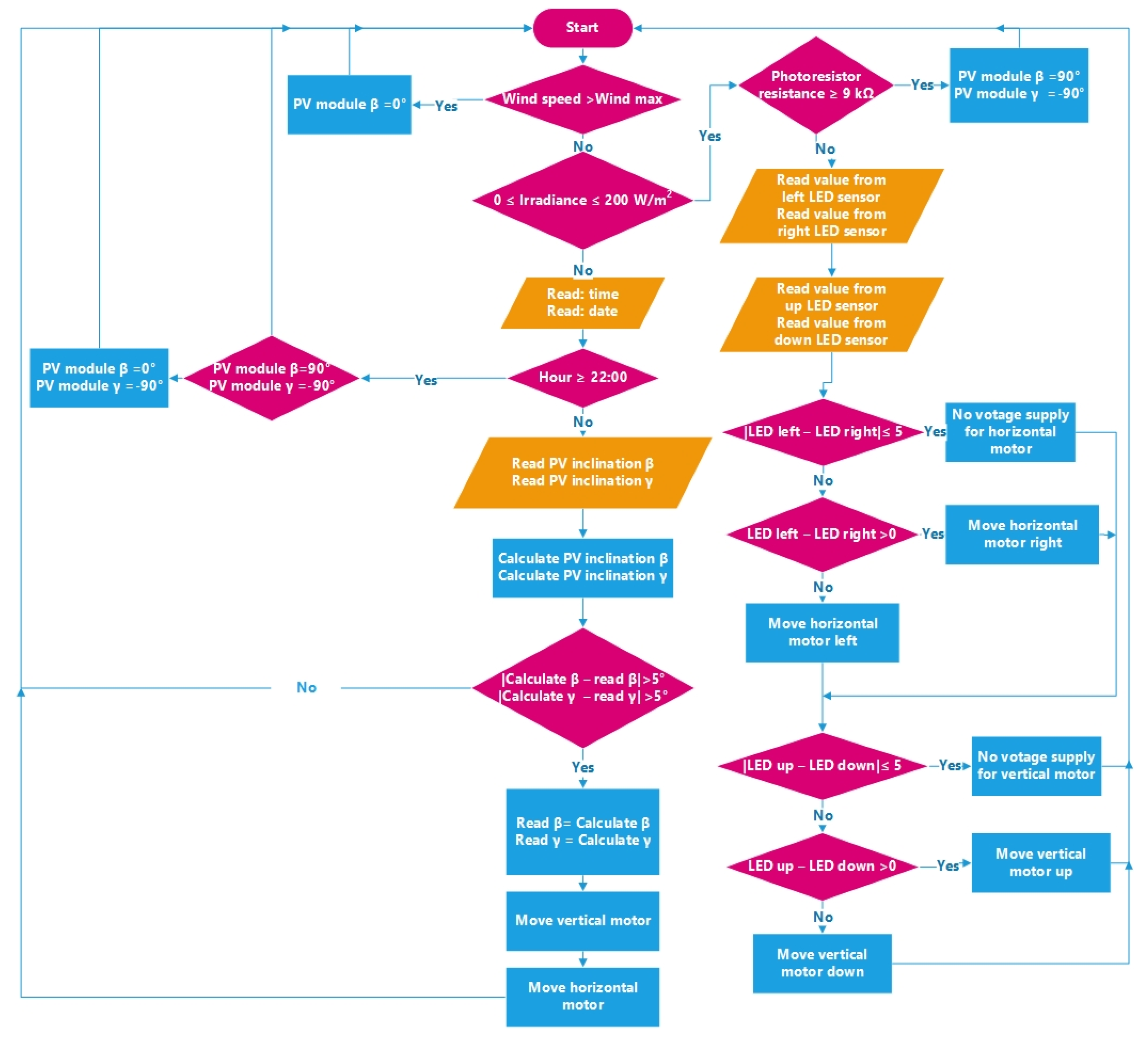 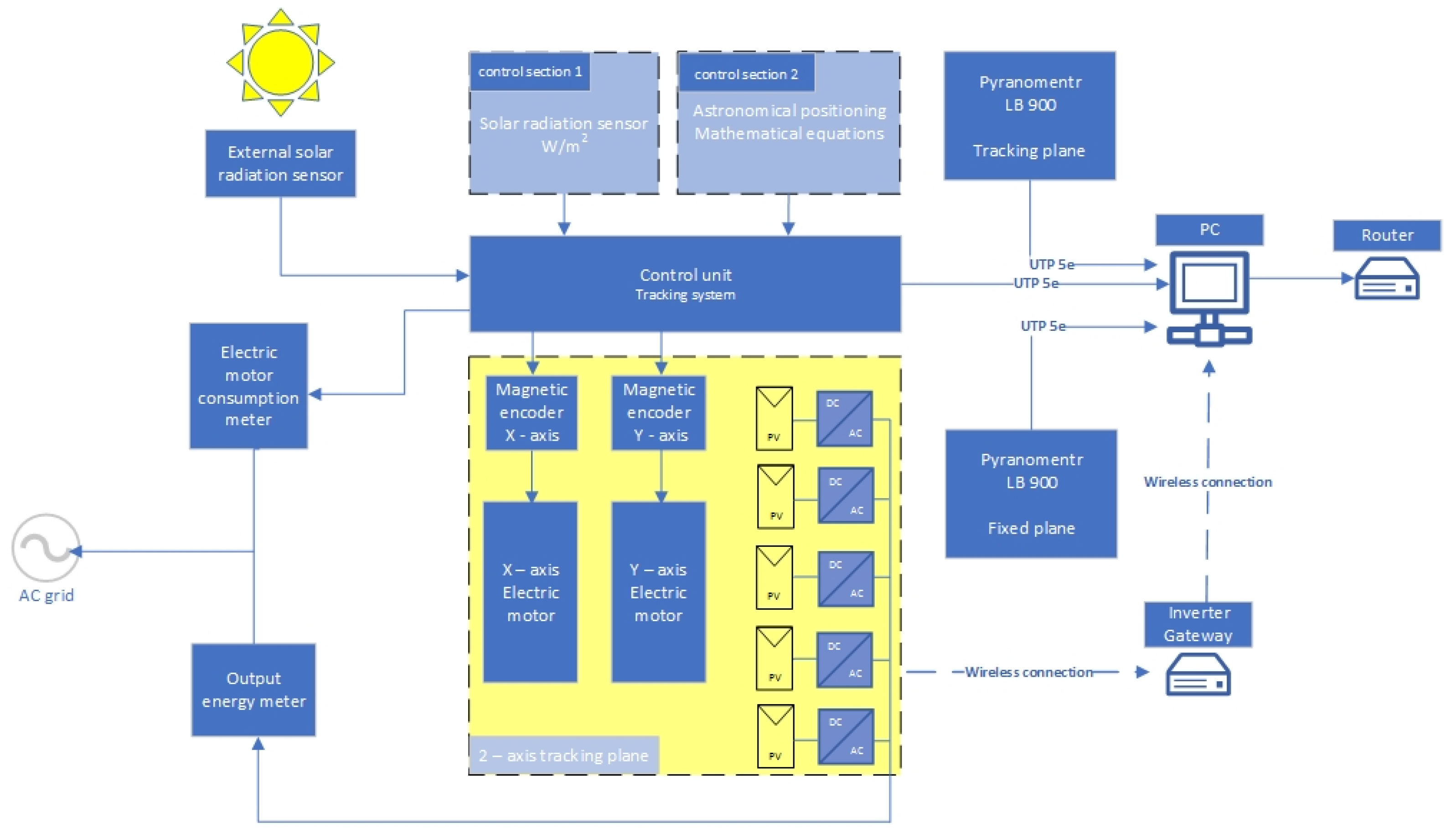 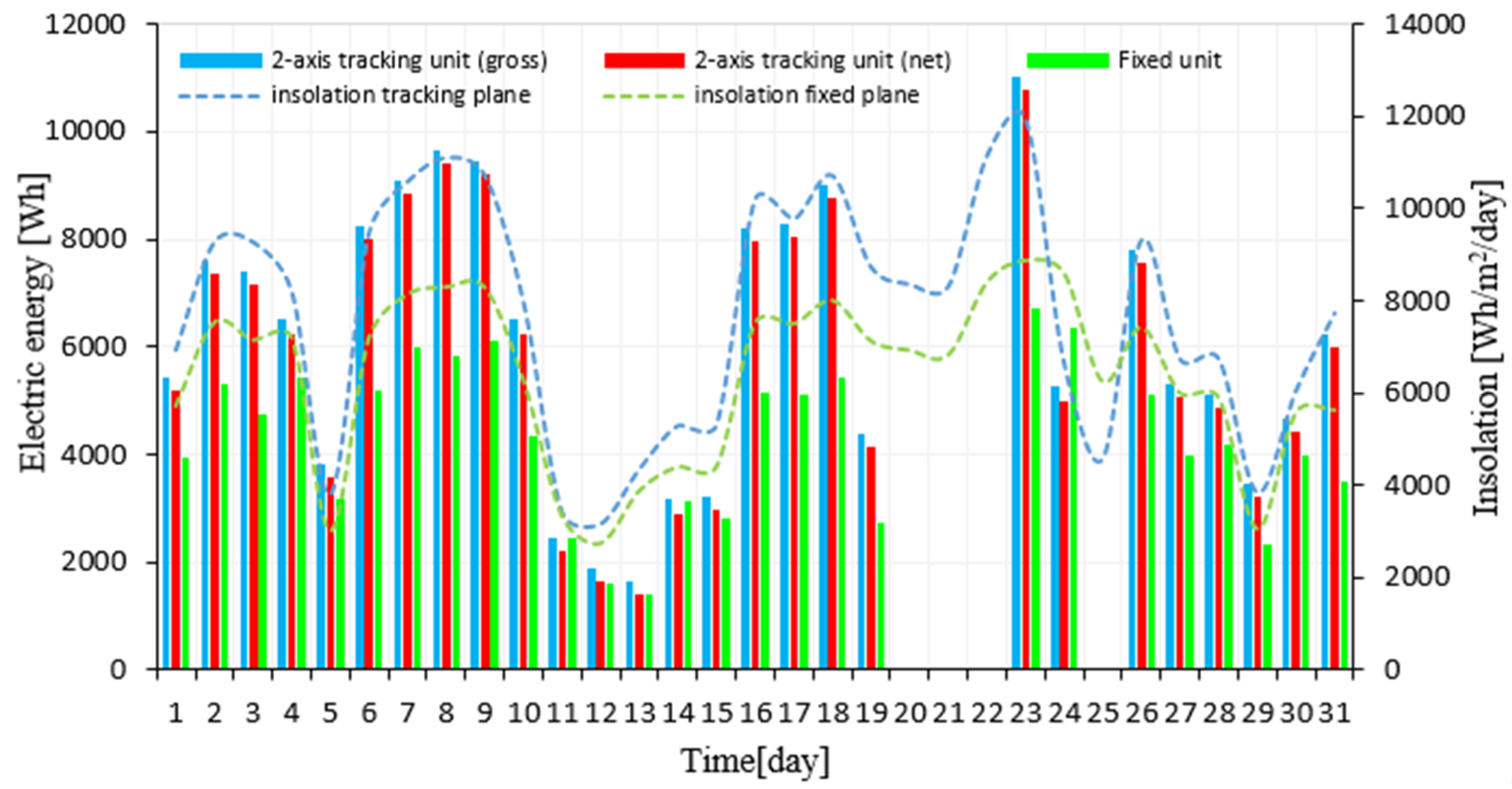