Where Will You Park? Predicting Vehicle Locations for Vehicle-to-Grid
Previous Article in Special Issue

Three load matching indicators (self-consumption rate, self-sufficiency rate, loss of load probability) and the CO2 emissions were evaluated for 55 Cypriot households with 3 kWp rooftop photovoltaic (PV) generators. The calculations were performed using 30-minute generation and consumption data from a large scale smart meter project in Cyprus. To investigate the effects of recent advances in local legislation, an analysis for higher PV capacities (5 kWp and 10 kWp) was also performed. The PV generation profiles for 5 kWp and 10 kWp PVs were obtained by scaling the 3 kWp PV generation profiles. The results showed that the self-consumption of the analyzed households varied seasonally, as it was related to their heating and cooling demand. More interestingly, the ratio between the households’ annual electricity generation and demand, formally defined here as generation-to-demand ratio (GTDR), was found to be related to the value ranges of the studied load matching indicators. Hence, on average, households with 3 kWp PV generators annually self-consumed 48.17% and exported 2,415.10 kWh of their PV generation. On the other hand, households with larger PV generators were characterized by a higher GTDR, but lower load matching capabilities. For the cases of 5 kWp and 10 kWp PV generators, the average self-consumption fell to 34.05% and 19.31%, while the exported PV generation was equal to 5,122.47 kWh, and 12,534.90 kWh, respectively. Along with lower load matching capabilities, households that generated more than they consumed were also found to have a lower potential for CO2 emissions reduction per installed kWp within the boundaries of the building. In this context, the GTDR could be used by stakeholders to characterize buildings, infer possible value ranges of more complex indicators and make evidence based decisions on policy and legislation. View Full-Text
Keywords: photovoltaics; self-consumption; self-sufficiency; load matching indicators photovoltaics; self-consumption; self-sufficiency; load matching indicators
►▼ Show Figures 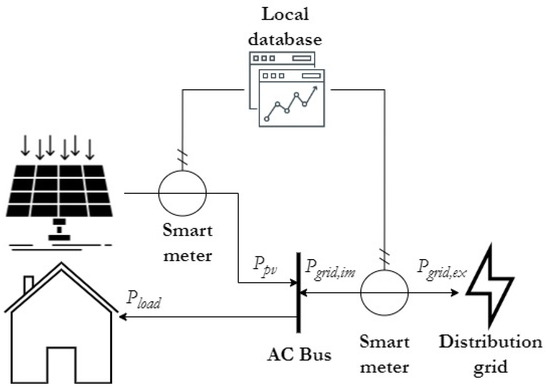