A Field Experiment on Wave Forces on an Energy-Absorbing Breakwater

Using salt caverns for an underground strategic petroleum reserve (SPR) is considered as an ideal approach due to the excellent characteristics of low porosity, low permeability, self-healing of damage, and strong plastic deformation ability of rock salt. Salt deposits in China are mostly layered rock salt structures, with the characteristics of many interlayers, bringing great challenges for the construction of SPR facilities. Studying the microscopic pore characteristics of the rock surrounding SPR salt caverns in different environments (with brine and crude oil erosion) is necessary because the essence of mechanical and permeability characteristics is the macroscopic embodiment of the microscopic pore structure. In this paper, XRD tests and SEM tests are carried out to determine the physical properties of storage media and surrounding rock. Gas adsorption tests and mercury intrusion tests are carried out to analyze the microscopic pore structure, specific surface area variation and total aperture distribution characteristics of SPR salt cavern host rock. Results show that: (1) Large numbers of cores in interlayer and caprock may provide favorable channels for the leakage of high-pressure crude oil and brine. (2) The blockage of pores by macromolecular organic matter (colloid and asphaltene) in crude oil will not significantly change the structural characteristics of the rock skeleton, which is beneficial to the long-term operation of the SPR salt cavern. (3) The water–rock interaction will bring obvious changes in the micro-pore structure of rock and increase the leakage risk of the storage medium. The results can provide theoretical bases and methods for the tightness analysis of China’s first underground SPR salt cavern.
Keywords: strategic petroleum reserve (SPR); bedded rock salt; salt cavern; pore characteristic; gas adsorption strategic petroleum reserve (SPR); bedded rock salt; salt cavern; pore characteristic; gas adsorption

The petroleum in the national strategic petroleum reserve plan generally refers to crude oil that has not been processed. It is usually a dark brown mixture of liquid hydrocarbons such as alkanes, cycloalkanes, aromatic hydrocarbons, and olefins. Its condensation point is between −50~35 °C. The relative density is generally between 0.75 × 103 and 0.97 × 103 kg/m3. Colloids and asphaltenes are the basic components of crude oil. The crude oil used in all the tests in this paper was obtained from Jianghan Oilfield of Sinopec. The basic physical parameters of the crude oil were measured in Jianghan Oilfield Exploration and Development Research Institute. The results are shown in Table 1.

The brine used in the test was obtained from the brine collection site of Jintan Salt Mine. The brine samples were divided into four groups (of which sample S-4 is the saturated brine sample of the salt mine). The chemical composition of the samples was analyzed. The analysis results are shown in Table 2. The results show that the main ions in the brine samples are Na+ and Cl−, containing a small amount of SO42−, Ca2+ and a very small amount of other ions such as Mg2+, K+, etc.

The samples of the surrounding rock are taken from the depth ranging from 840–1100 m of well M17 in Jintan salt mine. That is because the proposed depth of the SPR salt caverns range from 960–1060 m. Therefore, rock samples collected in this depth range will have better representativeness. The mineral composition of the rock was determined by the Bruker AXS D8-Focus X-ray diffractometer. The mineral compositions of rock salt, interlayer and cap rock are shown in Table 3, Table 4 and Table 5.
According to XRD test results, the average content of sodium chloride in rock salt samples is 92.13%. The main mineral components of the interlayer are albite, analcite, quartz, pyrite, spilite, feldspar, ankerite, rock salt, calcite, glauberite, and clay minerals. Quartz, albite and clay minerals account for 71.19% of the total mineral composition of the cap rock sample. This will play a decisive effect on the physical and mechanical properties of the cap rock.

The physical and mechanical properties of surrounding rock and its porosity and permeability depend on its mineral composition and skeleton structure composed of mineral particles. In order to analyze the microstructure of rock salt, interlayers and cap rock in SPR salt caverns, an SEM characterization was carried out. It can recognize the size, occurrence, and distribution of minerals, pore shape of rocks, throat size, the structure of particle epidermis and pore throat wall, etc. It can also identify the blockage of pore throats after contact with the fluid.
Scanning results of rock samples are shown in Figure 3. It can be seen that the surface of the rock salt sample is extremely compact. The crystal grains are large and the cementation between the crystal grains is extremely tight. After being magnified 2000 times, only a few pores on the surface of the crystal grains can be seen, which shows that the pores of the rock salt are far smaller than the micron level, while the pores larger than the micron level obtained through other pore size analysis experiments are more likely to be caused by micro-cracks in the rock salt sample. This reflects the essential reason for the extremely low permeability and porosity of rock salt. Mineral particles in interlayer samples are small and mostly in the form of clusters or sheets, with many surface pores and uneven pore size distribution. The cap layer samples have two distinct pore structures: crystal structure and lamellar structure. Compared with rock salt, the number of micropores in interlayer and caprock may provide favorable channels for the leakage of high-pressure crude oil and brine.

To study the pore structure characteristics of cavern surrounding rocks under crude oil immersion and brine immersion conditions, our research group independently designed a liquid phase immersion test device for the tests, as is shown in Figure 4. It can simulate the underground environment in the SPR caverns based on the in-situ stress and temperature data measured in the field. The pressure of the device ranges from 0 to 50 MPa, and its accuracy is 0.1 MPa. The control temperature of the device ranges from 0 to 110 °C, and its accuracy is 0.1 °C.
The temperature in this test was set at 50 °C according to the measured brine temperature at 1000 m depth. The pressure was set as the hydraulic pressure of the oil or brine applied to the mudstone interlayer at 1000 m depth. The hydraulic pressure is calculated as P = Pw + γliquidh, where Pw is the wellhead pressure; γliquid is the unit weight of brine or crude oil; h is the calculated depth. According to the previous research, the hydraulic pressure of the brine on the surrounding rock is about 12 MPa (γwater = 12 kPa/m, Pw = 0 MPa). The hydraulic pressure of the crude oil on the surrounding rock is about 14 MPa (γoil = 8.20 kPa/m, Pw = 6 MPa). The hydraulic pressure schematic graph of the SPR salt cavern are shown in Figure 5.
All of the gas adsorption test samples and mercury injection test samples in Section 4 and Section 5 were preprocessed by the immersion test device before testing.

A static nitrogen adsorption test was completed in the testing center of the Wuhan Institute of Geotechnical Mechanics, Chinese Academy of Sciences. Before the test, in order to eliminate the residual bound water and capillary water in the samples, all samples are vacuumed at 300 °C for 3 h. In the experiment, high purity nitrogen was used as the adsorbate, and the nitrogen adsorption capacity at different relative pressures was measured in a liquid nitrogen 77.35 K low-temperature environment. The adsorption isotherm is plotted with the relative pressure as the abscissa and the nitrogen adsorption amount as the ordinate.
According to the erosion of surrounding rock by different media during the construction and operation of the SPR salt cavern, the preparation of rock salt, interlayer and cap rock samples is divided into three different conditions: the natural environment, brine erosion and crude oil erosion. After that, static nitrogen adsorption tests are carried out. For rock salt samples we did not consider the brine erosion condition because of their water solubility. In order to characterize the influence of organic matter residue on surrounding rock pores, the samples saturated with crude oil are divided into two situations as control: crude oil erosion and oil washing (the samples eroded by crude oil are put into organic solvent for 24 h oscillation cleaning), considering that some organic matter in crude oil will remain after high temperature. Basic information about test samples and test conditions is shown in Table 6.

The core of changes in the pore characteristics of surrounding rock is the plugging effect of colloid and asphaltene in crude oil on rock pores and the erosion effect of brine. Although the above test results have verified this assumption, it is still only a reasonable inference based on test data. In order to directly characterize these phenomena, the samples under different erosion environments of interlayer were scanned by an electron microscope. The results are shown in Figure 15.
When the interlayer is eroded by crude oil, compared with the scanning results of electron microscopy under conventional conditions, the pores and microcracks on the surface of the sample are covered by a layer of medium, which directly confirms the assumption of the pore blockage being caused by macromolecular organic matter (colloid and asphaltene) in crude oil. However, it can be seen from the interface of the interlayer sample under brine erosion that a large number of microcracks appear at the interface due to brine erosion, the cementation between clay minerals and grains loosens, and a large number of grains and clay are dissolved and transported by brine, resulting in a significant increase in interlayer pores.

(1)
The surface of the rock salt sample is extremely dense, the crystal grains are large and the cementation between the crystal grains is extremely tight, which reveals the essential reason for the extremely low permeability and porosity of the salt rock. Compared with salt rock, a large number of voids in interlayer and caprock may provide favorable channels for leakage of high-pressure crude oil and brine;
(2)
Under the condition of crude oil erosion, the changes in the specific surface area and pore size distribution characteristics of salt rock, interlayer and cap rock samples are caused by the blockage of pores by macromolecular organic matter (colloid and asphaltene) in crude oil, which will not significantly change the structural characteristics of the rock skeleton, which is beneficial to the long-term operation of the SPR salt cavern;
(3)
Under brine erosion, the change in the specific surface area and pore size distribution characteristics of interlayer and caprock samples is caused by the dissolution and migration of a large number of crystal grains and clay by brine due to water–rock interaction, leading to the observation that some micro-pores of interlayer and caprock samples turn into macro-pores. This brings obvious changes in the pore structure of the rock and increases the leakage risk of the storage medium. It is suggested that the circulation time of brine in the SPR salt cavern should be reduced as much as possible after the completion of cavern construction.

Conceptualization, N.Z. and X.S.; Methodology, Y.Z.; Investigation, N.Z. and W.L.; Writing—original draft preparation, N.Z. and P.S.; writing—review and editing, X.S. and P.S. All authors have read and agreed to the published version of the manuscript.

The authors are sincerely grateful to J.J.K Daemen (Mackay School of Earth Sciences and Engineering, University of Nevada), for his thoughtful review of this paper. 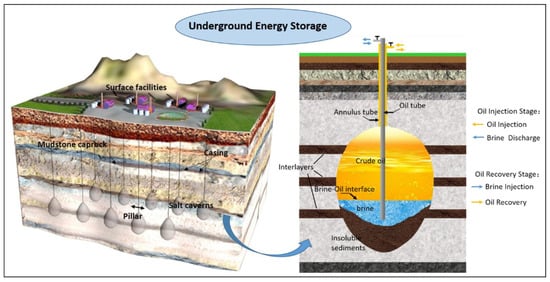 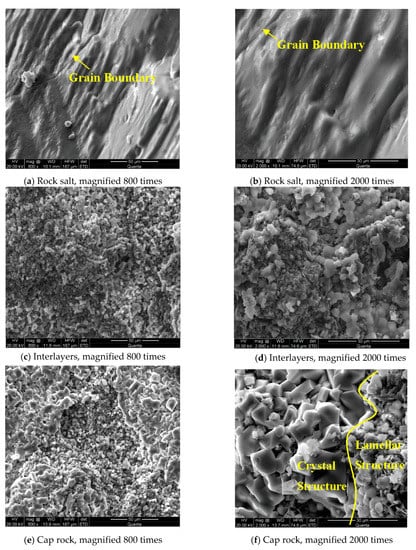 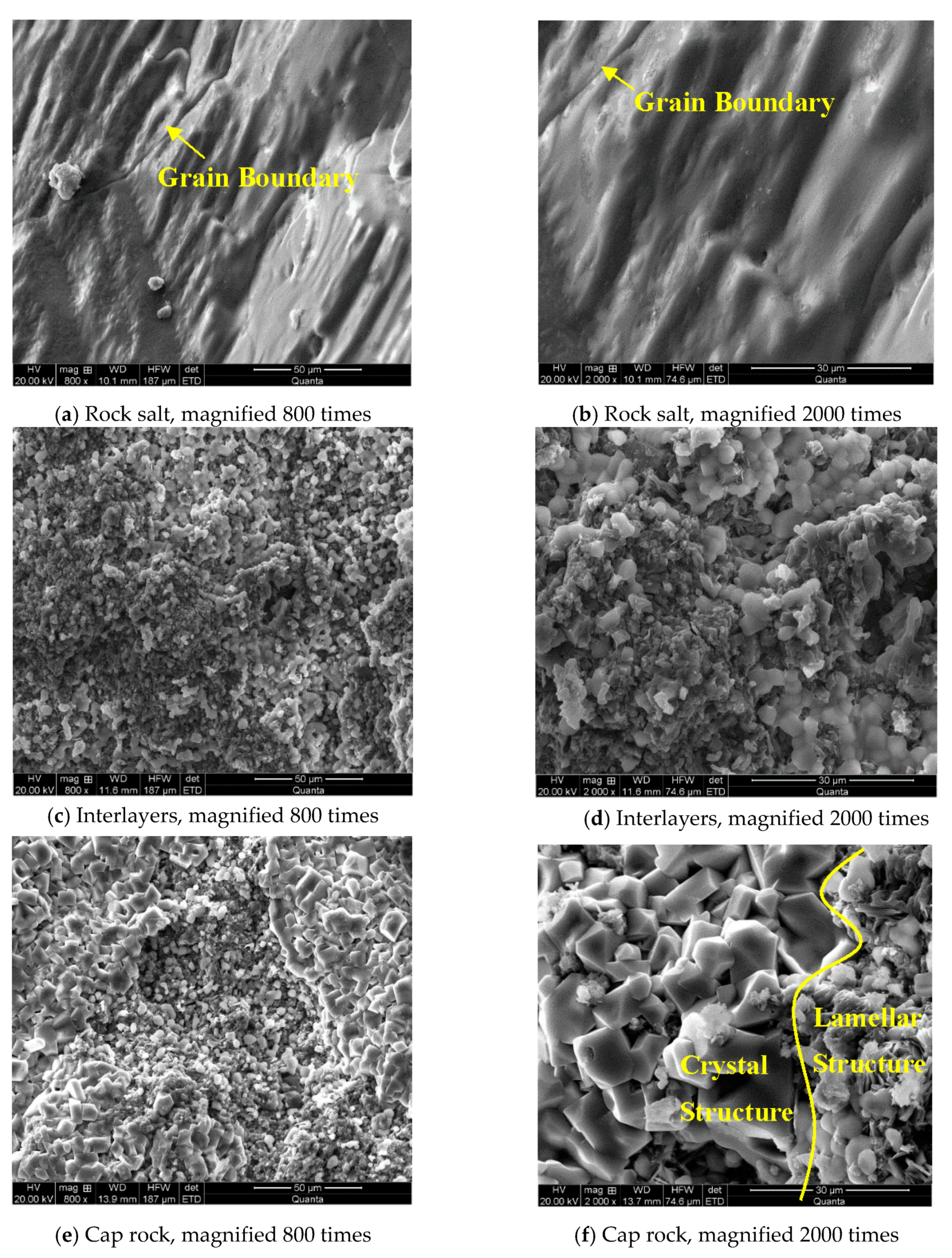 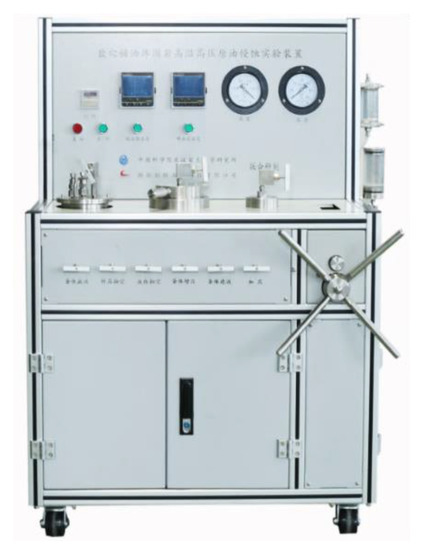 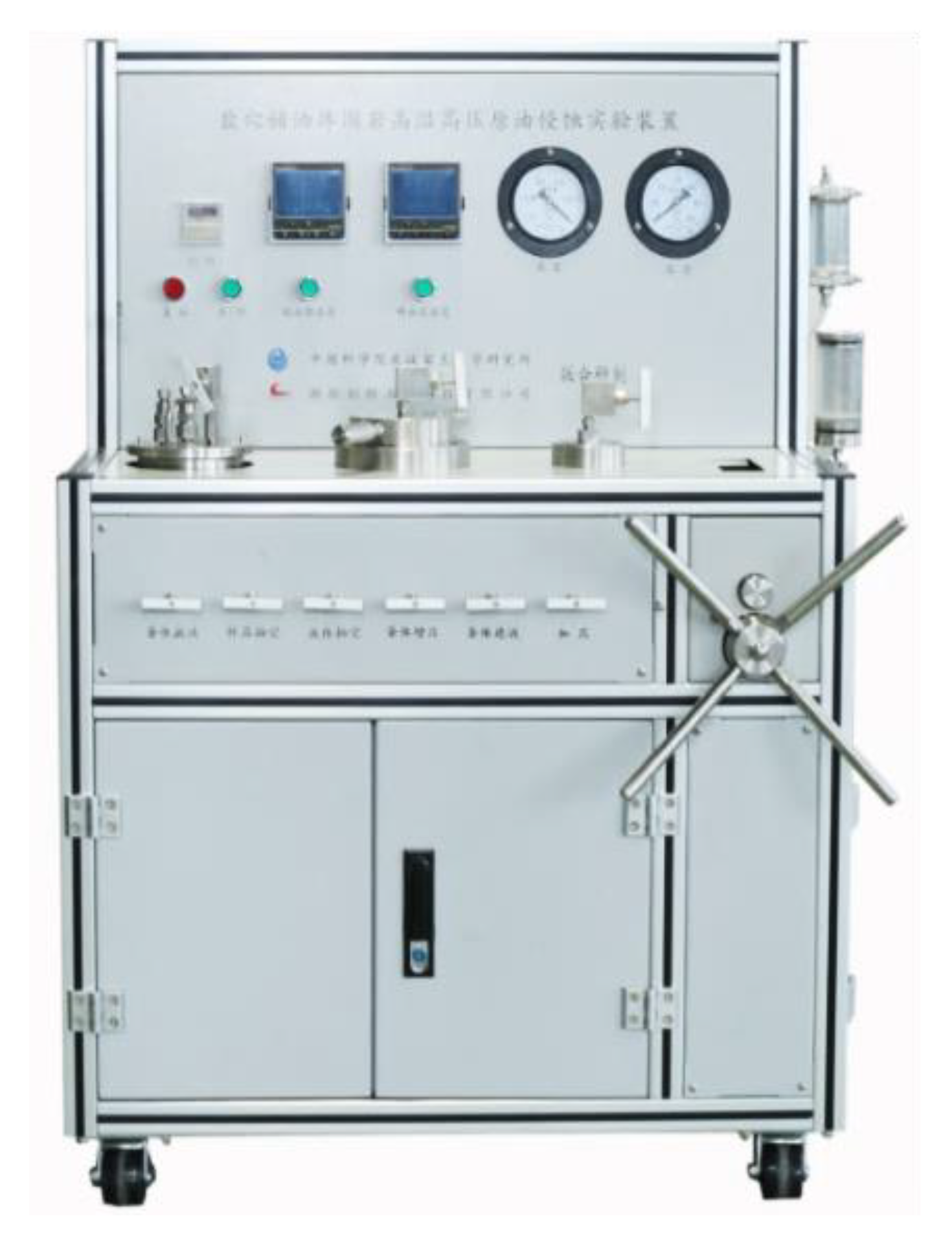 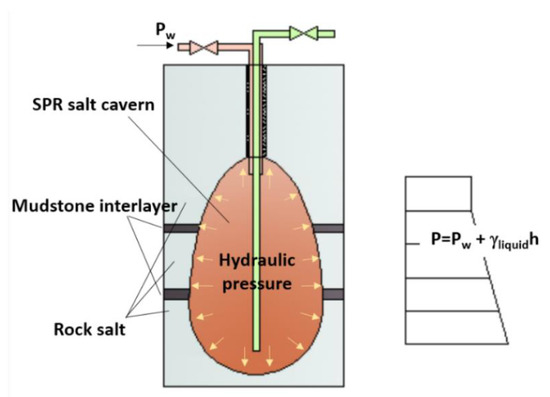 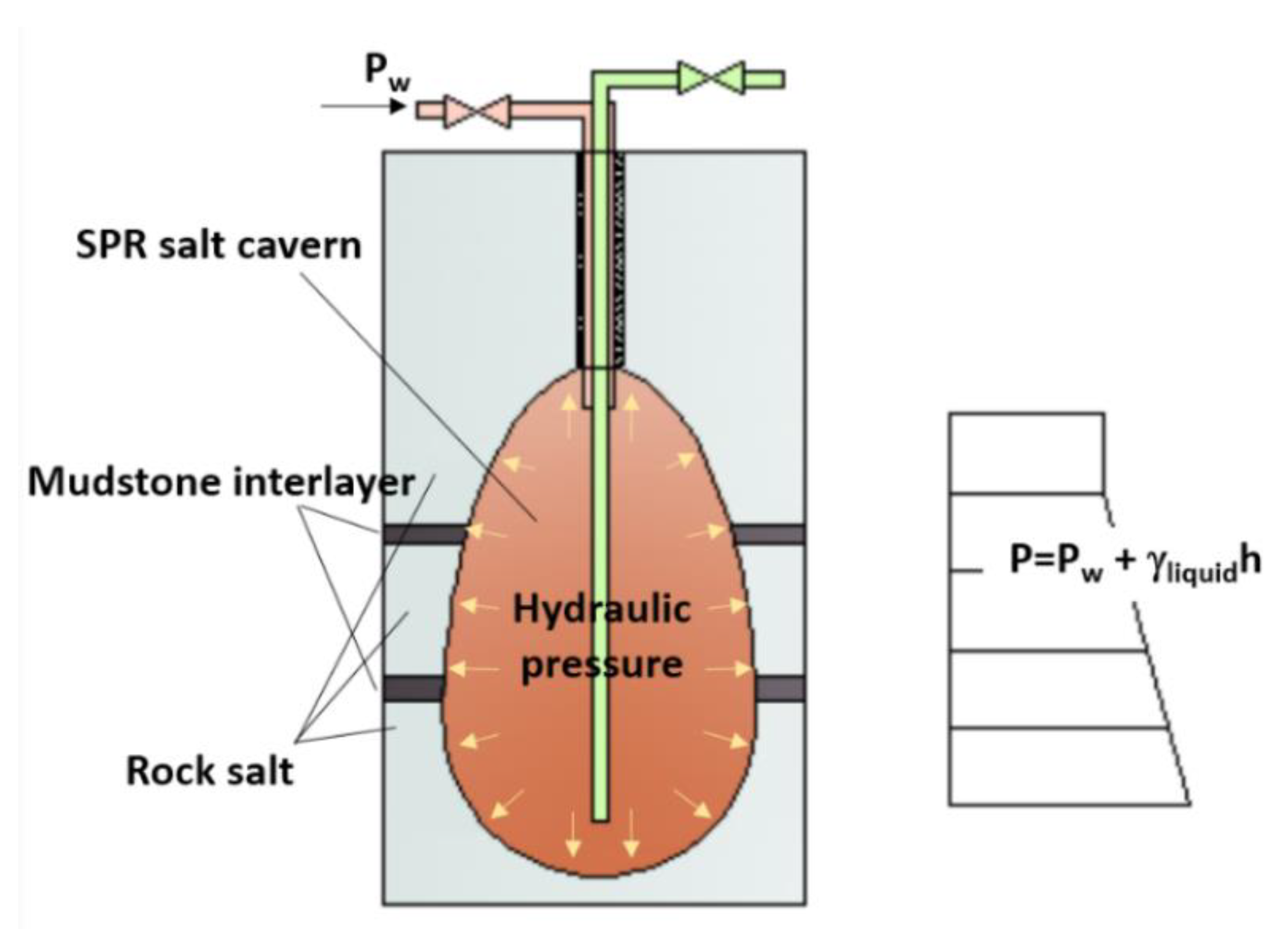 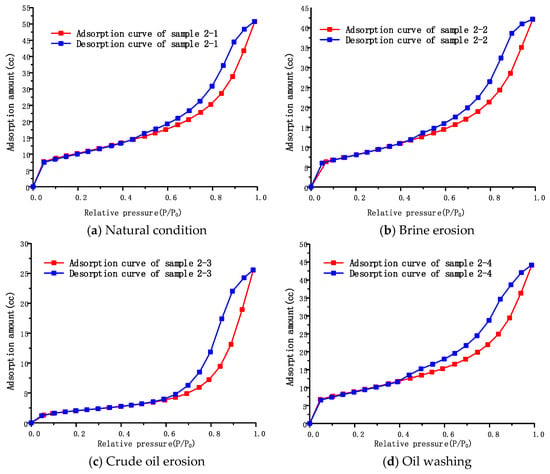 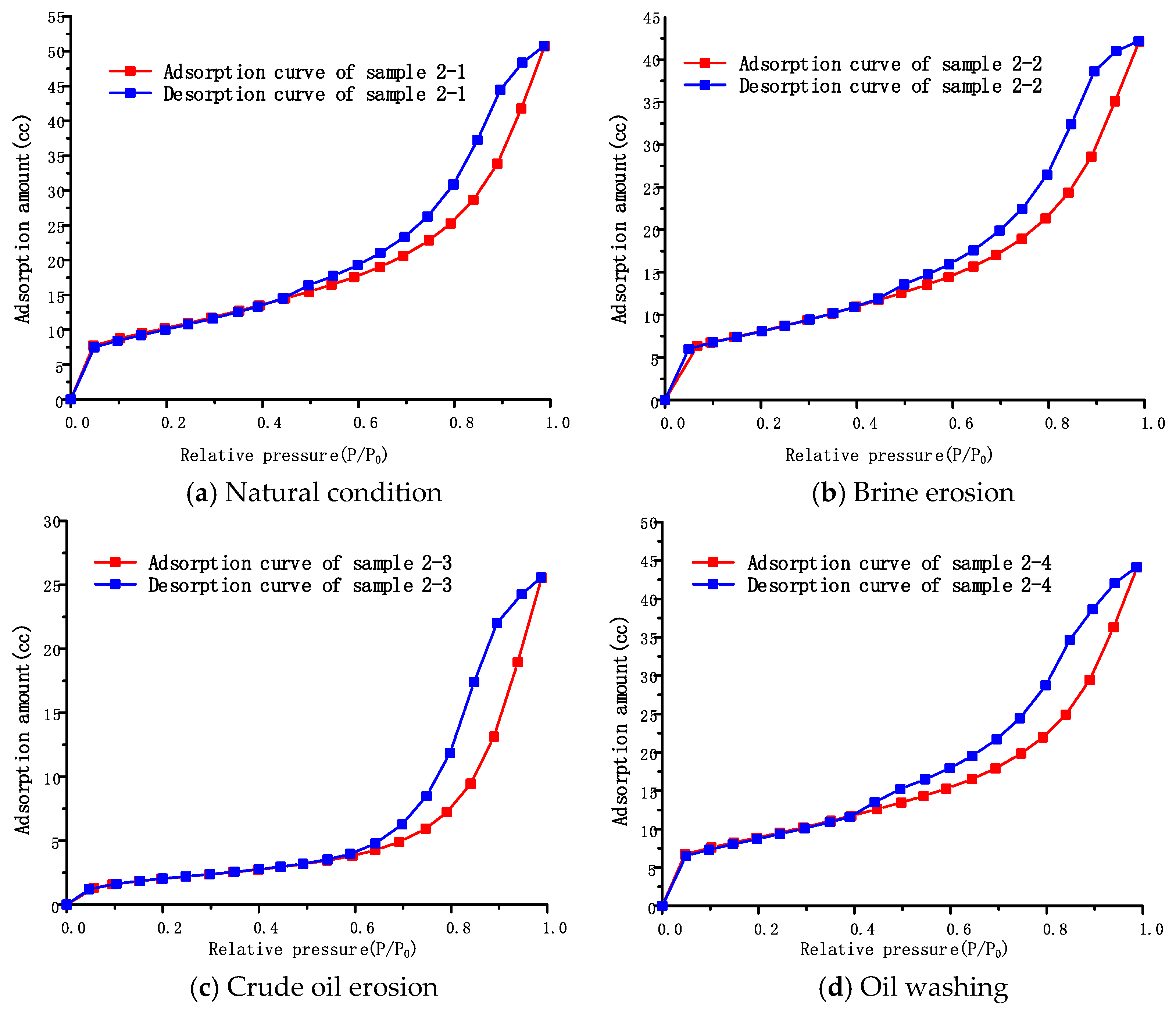 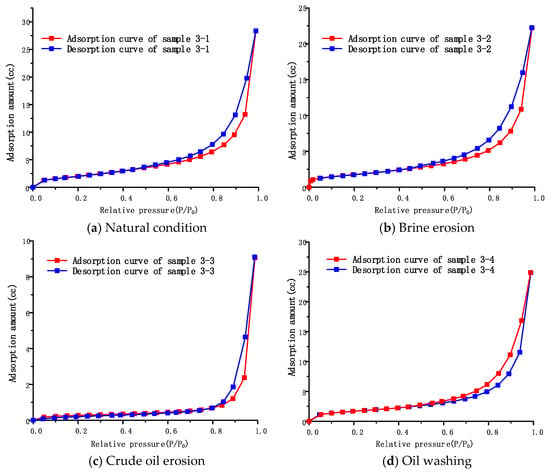 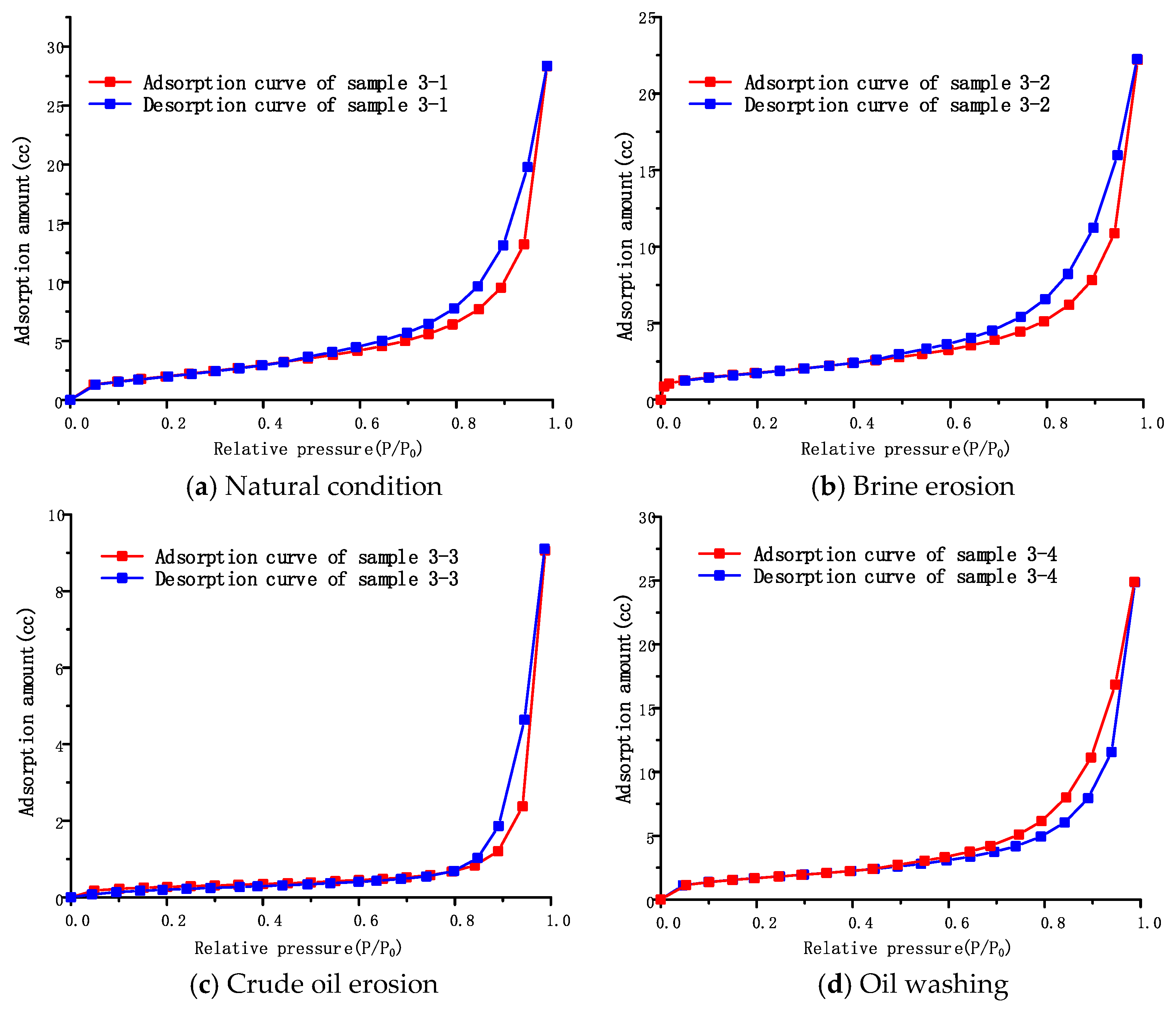 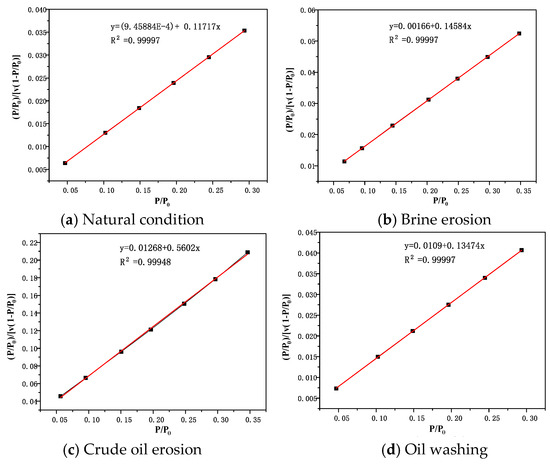 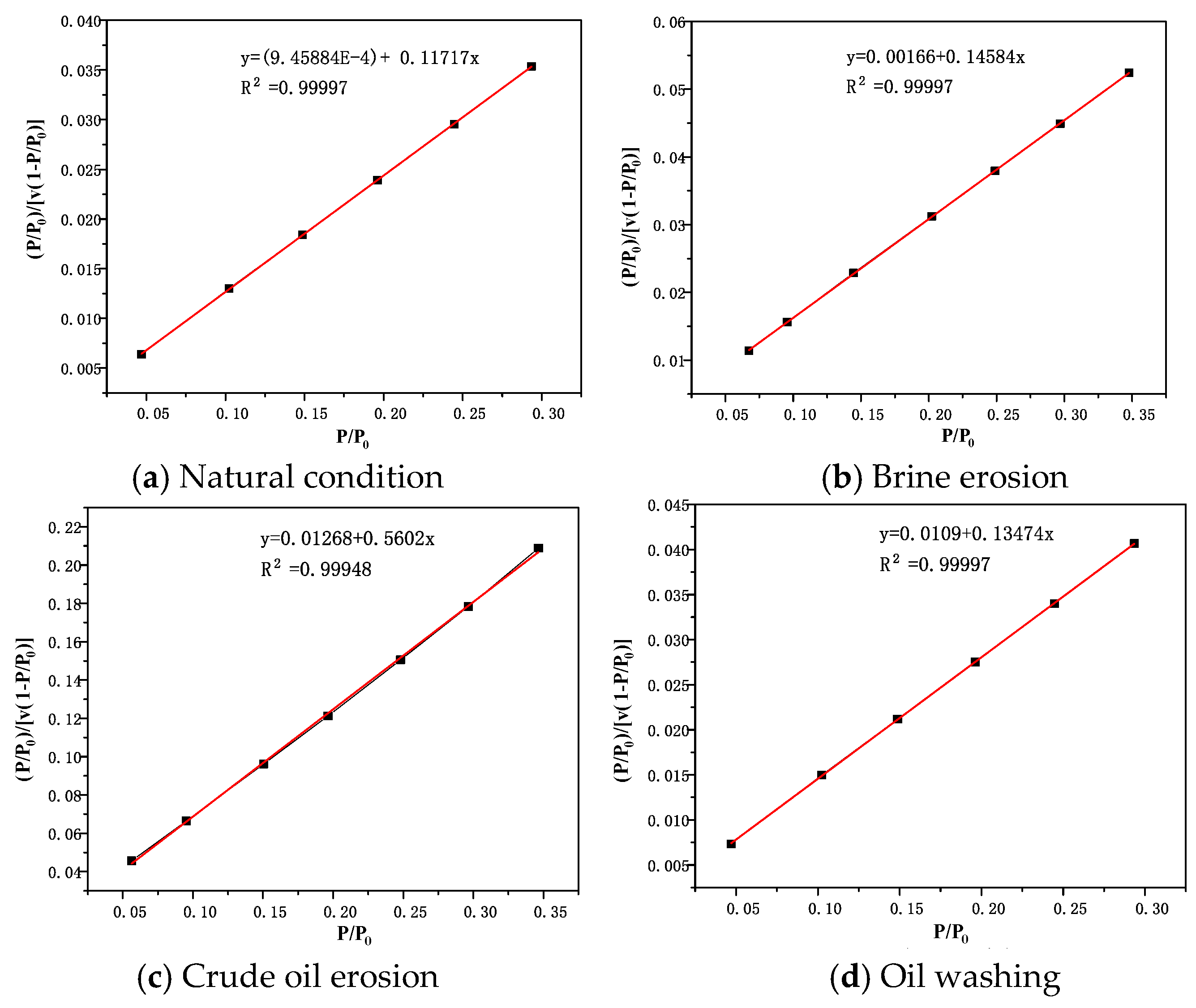 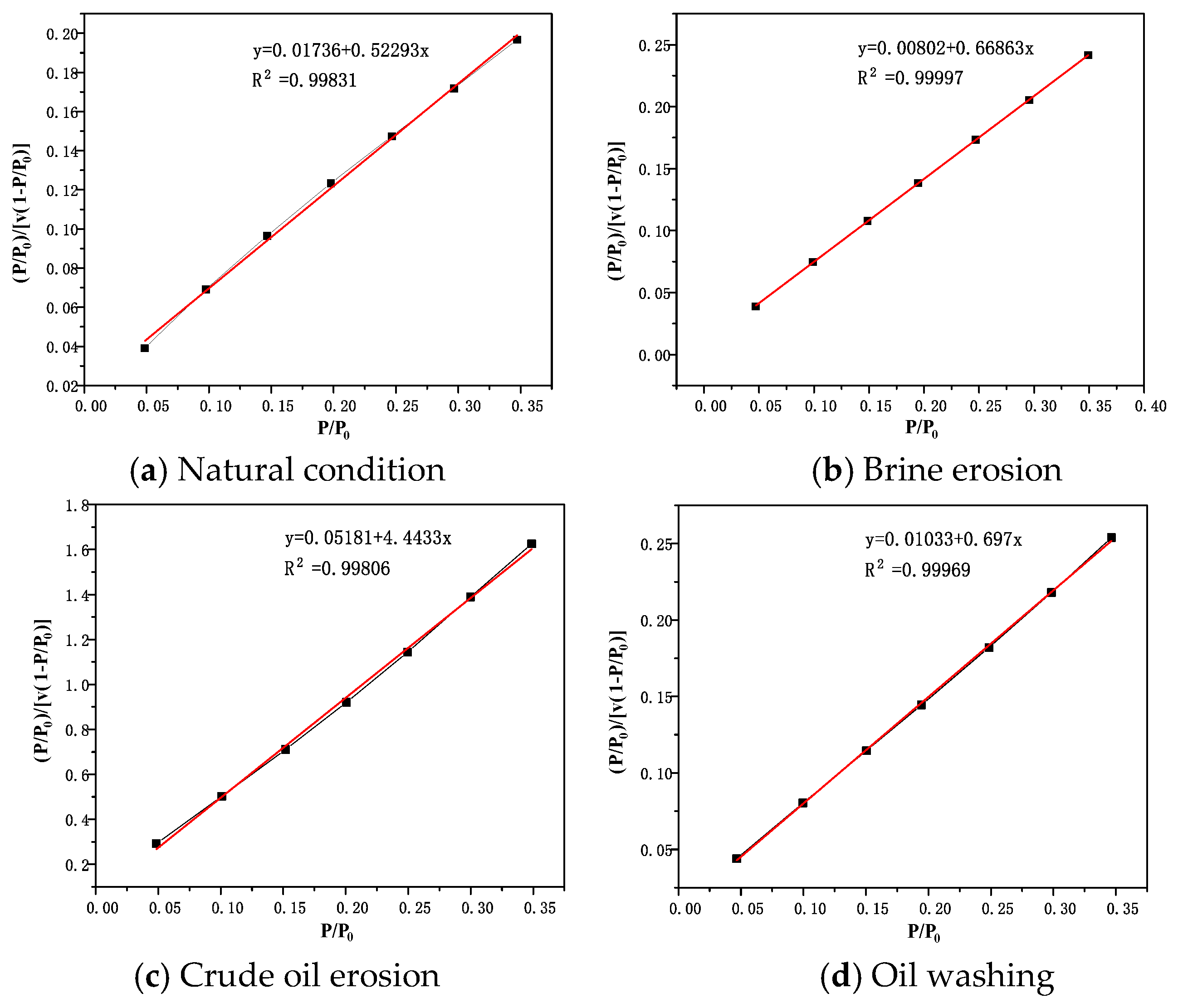