To simulate aircraft thermal anti-icing systems and solve the conjugate heat transfer of air-droplet flow and solid skin, the heat and mass transfer model of the runback water on the anti-icing surface was combined with the heat conduction equation of the skin by loosely coupled methods. According to the boundary conditions used for the runback water conservation equations, two loose-coupling methods for the heat exchange between the runback water and the solid skin were developed based on surface heat flow and surface temperature, respectively. The anti-icing and ice accretion results of a NACA 0012 electro-thermal anti-icing system were obtained by the two loose-coupling methods. The heat flow-based method directly solves the thermodynamic model of the runback water without any extra assumptions, but the convergence rate is relatively slow. On the other hand, the temperature-based method achieves higher calculation speed, but the freezing point is extended to an artificial temperature range between water and ice phases. When the value of the artificial temperature range is small, the results obtained by the temperature-based method are consistent with those of the heat flow-based method, indicating that the effect of freezing point extension can be ignored for thermal anti-icing simulation. Furthermore, the solutions of the two methods are in acceptable and comparable agreement with the experimental and simulative results in the literature, confirming their feasibility and effectiveness. In addition, it is found that the ice thicknesses and ice shapes rise obviously near the runback water limits as a result of the transverse heat conduction of the solid skin. View Full-Text
Keywords: aircraft ice accretion; thermal anti-icing system; heat and mass transfer; conjugate heat transfer; loose-coupling method aircraft ice accretion; thermal anti-icing system; heat and mass transfer; conjugate heat transfer; loose-coupling method
►▼ Show Figures 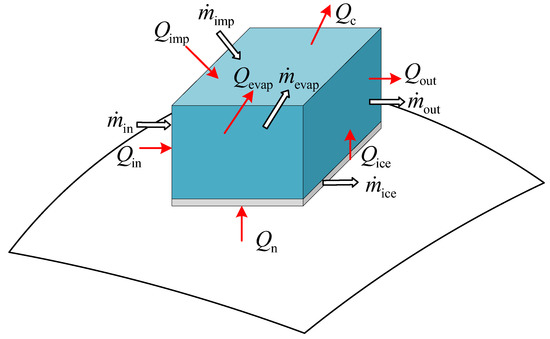